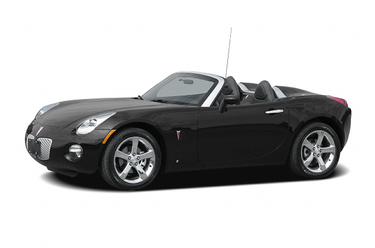 June 13, 2012
By Guy of a Certain Age from Central Indiana
Owns this car

Purchased a 2007 Pontiac Solstice GXP. Great looking car with head turning design. Test drove the GXP with the 2.0 L Turbo and the standard model with the 2.4 L, both had ample power. Ended up getting the 2.0 L turbo and enjoy the power the 260 hp turbo delivers when punching it. The GXP is getting 32 mpg with a mixture of city and highway driving. This is a solid little sport car and grips the curves at higher speeds. The Solstice has bascially no storage so only single over night trips are practical. In general the Solstice is a fun car to drive and be seen in.

December 5, 2011
By Latinarunner from Midlothian, VA
Owns this car

My red Solstice turns heads everywhere I go. A lot of people comment on the body style and say it's prettier than a Porsche. It really has little space for anything other than my purse, but I don't care. I love driving in it, it gets great gas mileage with the 4 cylinder engine,and it hugs the road. You can't get any more fun for yours sports car dollar than this, and you can take it to your local GM dealer for service.

I had been wanting a yellow GXP for a few years and finally got it. I went with the 5-speed over the automatic. It just felt more like a sports car to me. Pluses: The styling is the best part. I get tons of compliments. The top is very quick and easy to pop up and down. The power is even better than expected and yet I've been averaging 28 mpg (over 31 on highway). Drawbacks: You can accidentally touch the stereo power button and/or open the cup holder while trying to shift. The rear hatch doesn't always open on the first touch of the button. The interior plastics are too hard on many surfaces. The stock tires squeal too easily when turning and overall don't inspire confidence. I'll definitely upgrade to other tires in the future.

This little cat does more than just look pretty, it has performance that out does some of the more expensive 4 cylinders around. Although I've only owned it for a couple of months and had no reliability issues, I can say that thus far I love it! If I could add a back bench seat for my dog, I'd love it more. I went from a large 8 cylinder SUV where I could put the whole neighborhood in it and go. Now I must plan my every trip. It is really the only drawback to owning a 2 seater.

Quick as a cat and Union made in America!

The exterior design is so attractive that one almost wants to lick it. This car has the looks of an Italian-made roadster that only the very rich can afford. Many people on the streets of our city assume this GM product is actually an exotic European make. Coming stock from the factory my 5 speed manual GXP is fast enough for almost any sportscar lover. I went for the GM upgrade (performance package) which took the HP from 260 to 290, then had my Pontiac dealer install a Solo cat-back exhaust system and high performance catalytic converter for another 34 squirrels, boosting total output to 324 HP. This quick cat has now morphed into a rocket.

Love the looks of this car. Most don't even know what it is when they see it. When you tell them it's a pontiac. The most common reaction is "really". The car handles awesome. I drove it home from Texas to Ontario in January, hit a freezing rain/snow storm in the hills of Erie. It stayed like that all the way to Toronto, car handled fine in 2-3in. of snow with stock tires. When I arrived home my average speed for the whole trip was 68mph.

This car really looks nice and lots of fun to drive. This car is only going up in value every year. this car is not too expensi ve to own.

Exactly what I expected...

November 12, 2010
By tsg from California
Owns this car

I'm what some folks might call a gearhead - I've owned dozens and dozens of cars from a wide variety of manufacturers over the years, but I have never owned a small sports car. Coupes, sedans, even a '67 Cadillac limo, but never something tiny like a Solstice. I bought it for a change of pace... Here's what I can tell you: The GXP is nutty fast. I've owned LOTS of turbocharged cars, including a Saab 9-3 which *essentially* shares the GXP's engine. The direct-injected Ecotec in the Solstice is fantastic. Tiny turbo lag followed by huge power all over the place. This engine is exactly why I chose the Solstice over other similar roadster-type cars. I test drove an automatic and it was fine, but in a car like this you really need a manual. I ended up with the 5-speed, and I'm generally pleased by the clutch & shift action. It could be a little better, but it's a good combination of feel/performance between comfort and sportiness - and better than the T56 in my CTS-V by leaps and bounds. It handles great, with surprising turn-in for a factory car. Mine has HORRIBLE MXV4 tires which are the opposite of sporty, and the car is still very responsive. Once spring rolls around I'll replace them, and I expect wonderful things. 245/45-18 tires all around on a 3000lb car = sticky, even when the tires are cheap! The chassis is fairly rigid - not new Miata or S2000 good, but above average for a convertible. The flex it does have shows up in creaks in the top and shake in the hood, maybe a little squirminess when the suspension is loaded up. Could be better, but it's fine - and probably addressed by the aftermarket. The interior is, well, cheap. Cheap plastic bordered by cheap plastic and accented by cheap plastic. The "chrome" surrounds on the binnacle look nice, but catch street lights and stop lights as you drive by. The gauges are so deep and so blandly colored they can be hard to see in the shadows of the binnacle. Some switches are in what odd places. Nothing about the interior makes you think "expensive," but everything works, switchgear is all pretty positive, the seats/steering wheel/driving position are all very comfortable for me at 6' tall, and I will take the 260hp direct-injected turbo engine with dumb window switches and cheap dimmer control over a wheezy Miata or peaky S2000 pretty much any day. The Onstar-equipped rear view mirror is HUGE for a car of this size, and does a fine job of blocking out the entire passenger side of the windshield. That, I'd say, is my only actual annoyance with the interior! The Monsoon stereo is fine - it's boomy like all Monsoons seem to be, but decent for a factory job. The fact that it plays MP3s from its 6-disc changer and has an aux-in port make it more than tolerable. The non-Monsoon stereos are not adequate for a drop-top I think (easily drowned out by wind noise!), so I'd look for a Monsoon-equipped car. The car has zero storage - a glovebox that won't even fit the owner's manual, no door pockets, and just a small square box between the seats. The trunk is preposterous. The cupholders awkward. My advice to all drivers: YOU DON'T NEED TO TAKE YOUR LIVING ROOM WITH YOU WHEN YOU DRIVE SOMEWHERE. A driver's license, a credit card for gas, and the keys are about it. Leave the magazines, snacks, 44oz sodas, change of clothes, and all that other stuff at home! Overall: The Solstice GXP trades some refinement and ergonomics for huge power, huge tires, and some out-there styling when compared to its contemporaries. That was a trade I was willing to make, and I haven't once regretted the purchase. The only similar car I drove and generally liked better was the BMW Z4, and I could not get over its general appearance inside & out or the stigma associated with being a modern BMW driver. :)

The Solstice is a great looking fun car to drive. I love the wa y it looks and it drives like a go-kart. You can't beat the Solstice for the enjoyment and the price.

August 12, 2010
By mayvilleron from Mayville ND
Owns this car

I've owned many, many cars and this solstice is definitely in the top 5 of my favorite cars. I'm very satisifed with this car. Awesome!