Our 1995 Porsche 911 trim comparison will help you decide.

German automotive pioneer Ferdinand Porsche was a man who marched to his own beat.

He never was much of a believer in putting the engine at one end of the car and the driving effort at the other. And when he designed the Auto Union race cars and Volkswagen passenger car, he combined the engine and drive system at the back.

This is the same principle embraced by the new 1995 Porsche Carrera Coupe, a fitting tribute to Porsche’s work.

The 911, with its flat (opposed) six-cylinder engine mounted behind the rear driving wheels, is the model most associated with the Porsche name. And its general styling has been a Porsche trademark for the past 30 years.

With the 1995 Carrera, the body retains the overall traditional 911 shape, but with more flowing, rounded lines.

Ellipsoid headlights are integrated into the fender shape. Rear quarter windows and the rear window are flush-mounted. Functional air outlets are ahead of the front wheels.

The center brake lights have been redesigned. And improved aerodynamics contribute to a myriad of styling revisions.

The 911 has always been manufactured with the driving enthusiast in mind, and Porsche has upgraded the 1995 Carrera with more power; a new, standard six-speed manual transmission; more offset for the front and rear wheels; wider standard rear tires; larger front brake discs; and a new Bosch ABS 5 anti-lock brake system.

With all this in hand, you can really go. And go is what we did with the 911 coupe that Porsche’s Barbara Manha provided for a test car.

A first encounter with one of these rockets dictates a few miles of driving to make the mechanicals user-friendly. Things go much better with a moderately light touch, and determining what the car likes and doesn’t like.

The transmission was the six-speed manual rather than Porsche’s Tiptronic automatic. With 270 horsepower in hand, a gain of 23 horses over the 1994 car, the coupe wasn’t an automobile you could drive in an absent-minded fashion.

It took a balance between engine speed and a sensitive clutch to pull away smoothly from a standing start. But once under way, just point the thing.

During conventional motoring modes, you develop varying shift patterns with the six-speed gearbox. You never use all six speeds, with sixth in fact being sort of an autobahn gear. For urban and suburban motoring, you’ll fall into patterns of 1-2-4, or 2-4, or 2-3-5, depending on traffic conditions.

Clutch effort leaned a little toward the heavy side. It also was necessary to put the pedal all the way down to avoid hanging up the gears during a shift. But once this became an automatic habit, the transmission would shift as smoothly as anything you would want.

The test car was equipped with optional 17-inch alloy wheels and tires, and this raised the steering effort a bit when going slow. However, the wide rubber gripped the road like they were suction cups, and you can go through high-speed corners like there’s no tomorrow.

Porsche is, and always was, a rather expensive automobile. And even though the 1995 911 is several thousand dollars less than the 1994, you’re still looking at the north side of $60,000. As a consequence, all the accouterments expected in a luxury automobile were found in the coupe.

Entrance and exit require a minor degree of acrobatics, standard fare in a sports car. But once inside, driver and passenger room is quite comfortable.

The test carhad what is known as 2-plus-2 seating, meaning there’s a back seat. But rear seating is ma inly for children, preferably small ones.

Porsche could help itself on its instrumentation if the gauges had a white background with black numbers, rather than the other way around. Shadows develop driving into the sun, and it fades the readability of the dials.

For reasons known only to the Germans, the ignition switch is on the left side of the steering post. That’s great for left-handed drivers, but a little awkward for the rest of us.

And if it wasn’t for a light on the ignition key, the switch would be almost impossible to find in the dark.

Porsche’s 1995 911 Carrera carries forward the Teutonic zest for quality and engineering in a sports car that appeals to a highly personalized market.

The new 911 furthers the aura of being in a class by itself. And it almost takes another Porsche to reside in that lofty atmosphere.

Good review of a very desirable car but if you want credibility, research why the key is on the left. It's there for Le Mans starts ... remember, drivers ran across the track, jumped in the car and drove off without seatbelts fastened. Having the key on the left allowed the drivers to start the engine with the left hand and shift to first with the right - the cars were all angled off in the direction of the track so as soon as the engine started and the car was in gear, the hands would be brought back to steering.

The 993 does a wonderful job of doing just about everything very well. Quick enough to have fun, not so fast that you're constantly answering "yes, I know why you pulled me over". Amazing styling, often referred to as the prettiest 911 ever made. Last air-cooled motor in a 911 but with the most modern air-conditioning and climate controls. Anti-lock brakes, but very limited other driver controls. Fuel consumption is around 15 city/22 highway but some of that is likely tied to driver behavior.

Great car but not bullet proof.

What driving used to be like. Experience the less refined driving experience with modern conveniences. Expect to pay much money for the simplest service like oil change. If you want to play you have to pay. 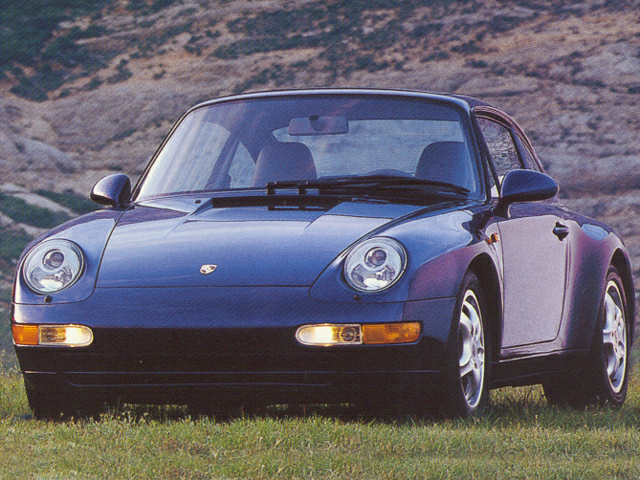