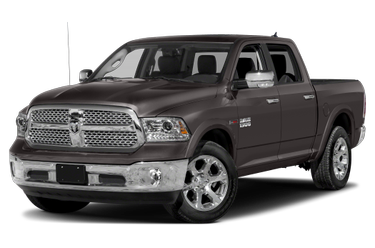 Rating breakdown (out of 5):
1 person out of 3 found this review helpful. Did you?
Show full review
5.0

I have about 75K miles on my 2018 RAM SLT FWD, 3.6L V6. It's the first truck I've ever owned, and I'm a big fan now. I've had a couple of very minor issues with the truck but nothing major. The first issue is the backup camera when haywire on me about 50K miles in. It turns out that it wasn't properly affixed in the factory, and I was able to fix this myself by taking off a few screws to remove the tailgate cover and then using a zip tie to hold the connection together. It's been perfect since then. The only other issue was the windshield washer fluid tube disconnected from the sprayer nozzle. I fixed that as well. Again, it was no big deal and it hasn't been a problem since. Everything else has been perfect on the truck. It's either purring like a kitten or roaring like a lion.

So far it’s been a good dependable truck! The truck drives well around turns and really sticks to the road. Inside is very comfortable and roomy.

Rating breakdown (out of 5):
6 people out of 6 found this review helpful. Did you?
Show full review
2.1

Our 2018 Dodge Ram 1500 eco diesel had a catastrophic engine failure at 30k miles. The truck is still under warranty, but FCA is denying repair and won’t tell us why nor will they tell us who exactly is denying the repair. Between FCA, the dealer and their service managers they all pass the buck to one another. This truck was lightly used and serviced. Do your research on the eco diesels, tons of engine failures at low mileage and FCA is always terrible to deal with. This truck also has an open ERG cooler recall and FCA doesn’t have the part to fix these trucks for over two years, your truck ends up being a ticking time bomb with a possible engine fire as the result. There’s currently a class action pending about the inability to fix the recall issue. Based on our interactions with FCA alone I would never buy a Ram truck again.

May 3, 2022
By Paul Collado from Black Creek , Georgia
Owns this car

Radio , systems screen jumps around changing channels on its own, mapquest sometimes works or cuts off then turns on . Would never buy another Ram should of stuck with Chevy like I have all these years .

Great Vehicle for Mileage and Price

Meets all our needs. Safe, Reliable, Performance and Value for the money are top par. But less stars for styling, etc. but that was out of my choice for this truck to not have all the bells and whistles. NOT reflecting the condition or anything of that matter of the truck I purchased. It is clean as a whistle, with low miles, and purchased a 6 year newer truck with 60,000 less miles, and make the same payment I do on my previously owned 2013 with 92,000 miles.

Rating breakdown (out of 5):
7 people out of 7 found this review helpful. Did you?
Show full review
3.4

Fun to drive (when it works).

June 1, 2021
By NeverBuyingRamAgain from Austin, TX
Used to own this car

I owned a 2018 Ram 1500 that I purchased new, and owned for three years total. I sold it because I just couldn’t justify the cost of ownership, and it was easily the most unreliable vehicle I’ve ever owned. I spent the first TWO YEARS of ownership taking it back and forth to various dealerships because the battery would drain within hours. A few dealership locations swore nothing was wrong with it, one even tried to claim I had the battery cables barely attached and that was the issue. Of course I’m not that slow, so I was fed up and insulted. Not the first or last time I was insulted by a Ram dealership, but that’s not what this review is about. Once I decided that free dealership diagnostics were hopeless, I started learning the basics of diagnosing electrical problems on my own. It turned out the radio was staying on somehow (with the screen and sound completely off) and draining the battery. That is an expensive fix, which is why dealerships did everything in their power not to properly diagnose and replace it under warranty. Eventually, a great service provider at a dealership an hour away did the swap after I came in and informed him of the specific issue. But was that the end of my electrical issues? Nope. Mysterious battery drain still happened occasionally, and it completely diminished my faith in my vehicle and the brand. A tinge of anxiety would appear before starting my truck, mostly because I dreaded needing to jump it or haul the battery back inside to recharge it for hours just to go for a drive. That was just the most frequent of the issues, though. There were other “smaller” and less frequent issues, such as stalling out during u turns for some odd reason. I would have to put the transmission in neutral, turn off the car, turn it back on, and hope during all this I wouldn’t get t boned when this happened on a hill. Maybe that wasn’t the proper way to handle the issue, but trust me, I tried just putting it back in drive again before restarting the vehicle. Never worked. That happening even once is unacceptable, but it happened at least five times. I say “at least” because a few times I’ve let friends borrow my truck for short trips, and they’ve reported the same. Occasionally, it felt as if gears were being skipped when accelerating. The truck would also creak, moan, and whine whenever I would pull out of a parking spot that was on a slight incline. Mind you I always made sure to do basic preventative maintenance, and I always used the parking brake. Most times I wouldn’t be able to fill my tank up in a timely manner because the evap canister was faulty and stopped the gas pump within seconds of beginning to refuel. Sometimes the interior would smell like gas. Despite these issues (and plenty more), I did have a lot of fun driving this truck both on and off road (more like overlanding, never rock crawling, as this was the 4x4 Rebel) when it *did* work. I just wish it could’ve been decently reliable. For the price I paid, I could've (at the time, certainly not now with the chip shortage and rapid appreciation in price) bought a used raptor instead, but I passed up on those and PAID MORE for this. Ironically enough because I wanted a new car with less potential issues. Online it seemed (at the time) that a late 4th gen Ram was the way to go. Boy was I wrong. Oh, and for the kicker, want to guess how many miles I had on it when it started having issues? I’ll give you a hint: less than 5,000. I sold the truck at less than 40k miles after three years because I couldn’t trust it to do any driving over substantial distances without completely quitting on me. So would I recommend this truck? NEVER. Especially not now during the chip shortage when it sells for close to what I paid brand new in 2018. I was glad to get whatever I could for it just to lose the headache. I didn’t even bother trying to recover more cash when selling it. You can avoid the headache I had for three years by not purchasing it at all. P.S.-Avoid the 5th gen rams too. They’re even worse in my first hand experience dealing with the ones owned by friends. Those ones are straight up death traps. Do your own research into those if my review didn’t convince you to stay clear of anything made by FCA. As long as you don’t fall for the fanboy hype and the nice looks, you’ll quickly learn just how awful FCA vehicles are. Learn from the mistakes of others.

May 22, 2021
By Very disappointed from Ohio
Owns this car

Uconnect software update, froze up my controls, now they are charging me for new one, and they have me over a barrel. Message of failure to download will not turn off, have to u hook terminals to stop from draining battery dead

Eco diesel has been very good

It has been very good. Only had one recall and service work done. 22-27 mpg. And adequate power. 4x4 works well and is comfortable. Good solid truck.

I traded in my 4Runner on this Ram. The 4Runner was great I just missed having a truck. I love the low price with all of the features that come with it. When compared to the other trucks that you pay more and get less with you can't go wrong. I got the 5.7L Hemi and love it!

Rating breakdown (out of 5):
4 people out of 4 found this review helpful. Did you?
Show full review