We’ve cracked 10,000 miles in our Best of 2019-winning Genesis G70, and it’s so far been a mostly problem-free experience. That’s great news for consumers — and this author’s sanity, as the person who manages our fleet of press and long-term vehicles — but not so great for an interesting story. Aside from fuel costs (we’ll get to those in a bit), we’ve spent a grand total of … $3.29 on needed items for the G70.

The G70 is still widely liked, or at least tolerated, by our staff, and it remains a joy to drive. For all its quirks and our complaints, the one constant has been that the G70 is fun. Senior Consumer Affairs Editor Kelsey Mays called the G70 a “hoot” to drive (because, apparently, he’s secretly a 77-year old millennial) and others echoed the sentiment. Senior Research Editor Mike Hanley said, “I still really love driving the G70 whenever I get a night or two in it. The big reasons are its just-right suspension tuning that delivers both a fun-to-drive feel and a forgiving ride at the same time, great steering feel, and a twin-turbo V-6 drivetrain that’s powerful and refined. For driving enthusiasts, it remains one of the best luxury sports sedans available today.”

“I recently spent a day in the G70 driving it out to Chicago’s suburbs and back, and what struck me was that the car was still so much fun to drive,” Newman said. “The engine and transmission work so well together, and zipping along the highway was a joy. That drive time was a good reminder of why this car was named our Best of 2019.”

The Genesis Connected Services app has also made owning the G70 somewhat easier, though it could certainly use some speed improvements.

One chief difference of our ownership experience compared to recent Best Of winners is that fewer staffers have taken the G70 for lengthy road trips. Does that have something to do with it being a compact luxury sedan versus our last three winners (two three-row SUVs and a minivan), plus more staffers having children? Most likely, but that just means more fun for those of us who don’t have kids.

It’s not all roses this far into our ownership of the G70, however — particularly when it comes to the interior. Some editors still manage to bonk their heads entering the driver’s seat.

“As the months wear on, I’m increasingly fed up with the G70’s cramped interior,” Mays said. “This car needs a bigger backseat, plus more headroom all around.”

We’ve also had significant wear and tear on the interior, which leaves us a bit disappointed. Color transfer from fabric has been an ongoing problem — we cleaned the seats in the spring, but as predicted, they’ve darkened again. Trim pieces at the base of the center console, ahead of the G70’s wireless charging pad, are also flaking. That’s not a serious issue, but it does speak to the materials quality of the G70 that we hope Genesis addresses in future models.

Copy Editor Patrick Masterson also has issues with ease of use for the G70’s multimedia system.

“Perhaps the most annoying thing for me is when I connect an external source via USB to the multimedia system,” Masterson said. “For the most part, I find the system to be clear and logical, but going from one menu to the next is difficult the deeper into submenus you get. The screen shows you a menu off to the left with things like artists, tracks and more, but touching the screen to skip backpedaling out of each submenu is impossible. It’s small, but if you’re the type of person to jump around songs or podcasts, it can be a needlessly frequent distraction from keeping your eyes on the road.”

We’ve also had some issues with the head-up display in our car, prompting two visits to the dealer. It needed scheduled service, as well, but we should again emphasize that the “visits” meant a dealer valet that meets you, leaves a loaner car and takes your Genesis in for service. That perk comes for the first three years or 36,000 miles (whichever comes first), as does complimentary maintenance. Genesis covered all services save for the $3.29 out-of-pocket (for windshield washer fluid) under warranty and its complimentary maintenance program. It’s good the G70 has needed so little service since Genesis dealers have struggled to provide up-to-date digital service records as promised in the ownership experience.

Mays had high praise for the valet service. “The valet maintenance is turning out to be a huge perk,” he said. “In a gridlocked city like Chicago, where Cars.com is headquartered, eliminating the fuss of dealership visits is no small thing. Our dealer experience has had its warts, but the valet more than makes up for it. All in all, I’d take our experience versus an excellent dealer that still required you to show up.”

As for fuel costs, our G70 has been a bit thirsty, though no more than expected. The EPA rates fuel economy for our all-wheel-drive, twin-turbo 3.3-liter V-6 sedan at 17/25/20 mpg city/highway/combined. We’ve managed to crest that highway rating seven times so far, particularly on lengthy drives to Kansas, with a highest pump-calculated fuel economy of 28.5 mpg. At the same time, we’ve had an equal number of instances where the calculated fuel economy dipped below the EPA city rating, with a paltry 14.7 mpg as our lowest calculated tank.

Overall, we’re beating the combined fuel economy rating with an average of 21 mpg per fill-up. Since we’ve been using premium gas exclusively, any fuel efficiency helps. We’re averaging just under 300 miles per tank at an average cost of $49.22. Fill-ups averaged nearly 14 gallons of premium at an average price of slightly more than $3.50 per gallon. We should note, too, that some of that driving fun, particularly for this author, came at the expense of fuel economy. It’s a riot to drive in Sport mode, but it’s hell on fuel economy — particularly in the city.

The G70 has some teething issues and its share of First World Problems, but it seems so far that we’ve made a solid choice overall. 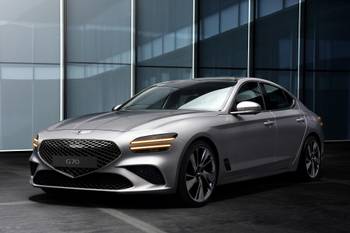 Next Genesis G70 Gets Updates, Inside and Out
More From Cars.com