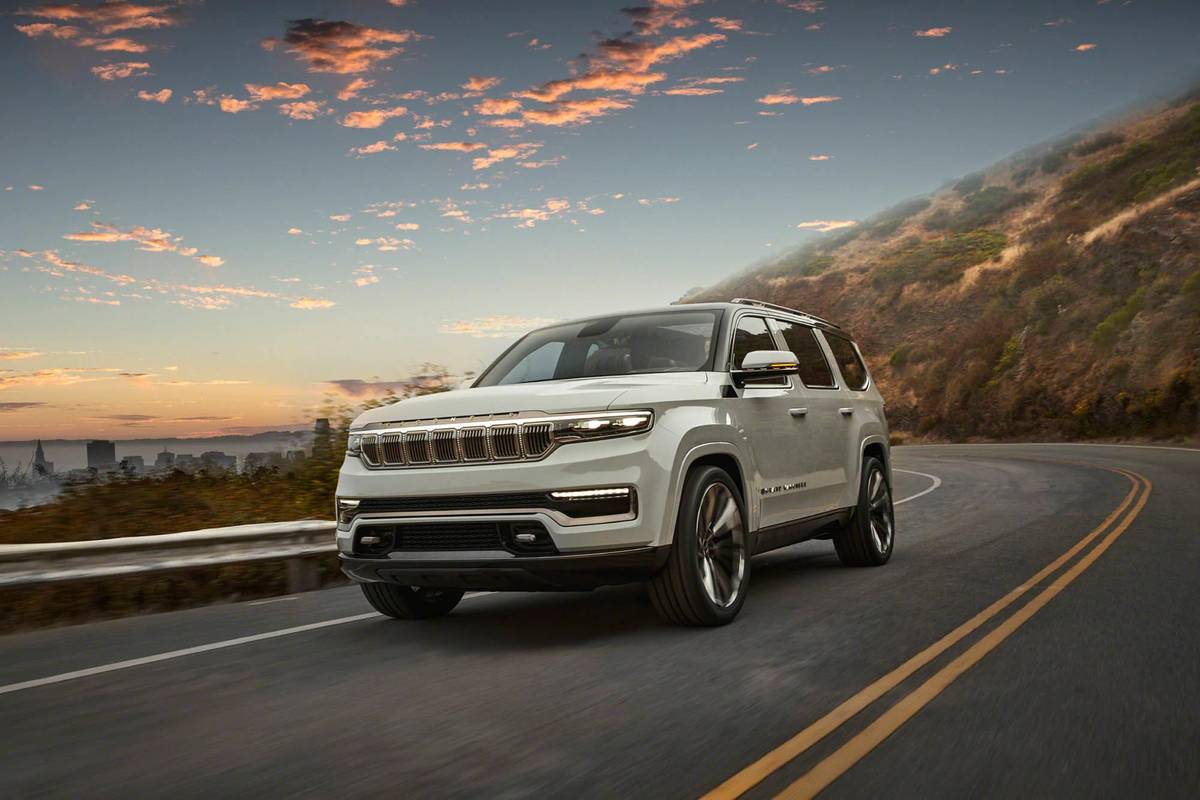 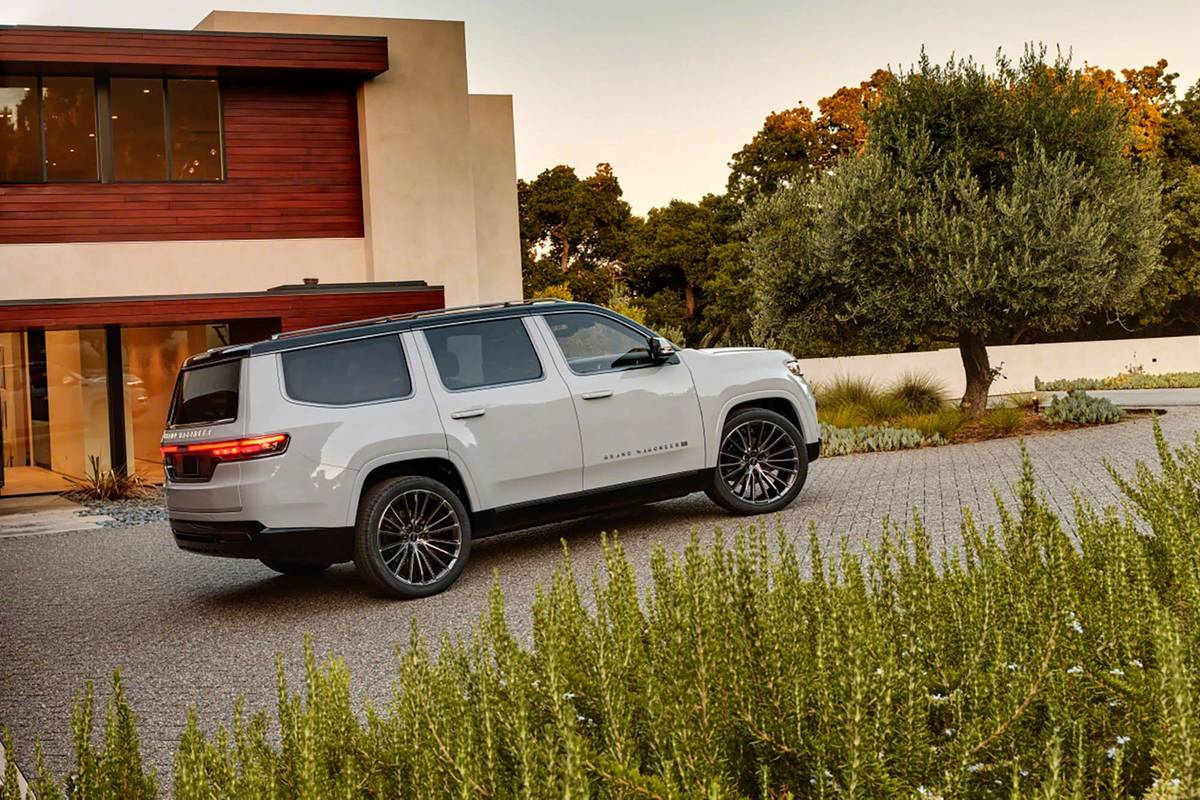 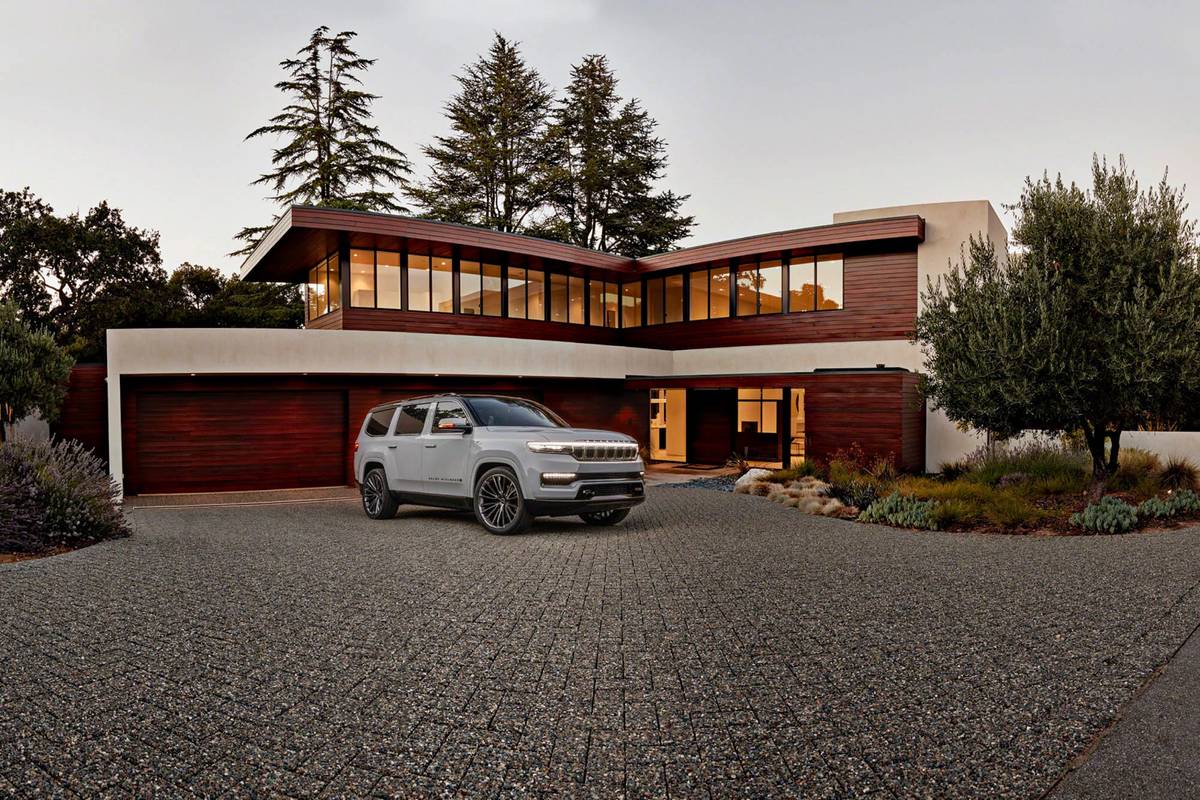 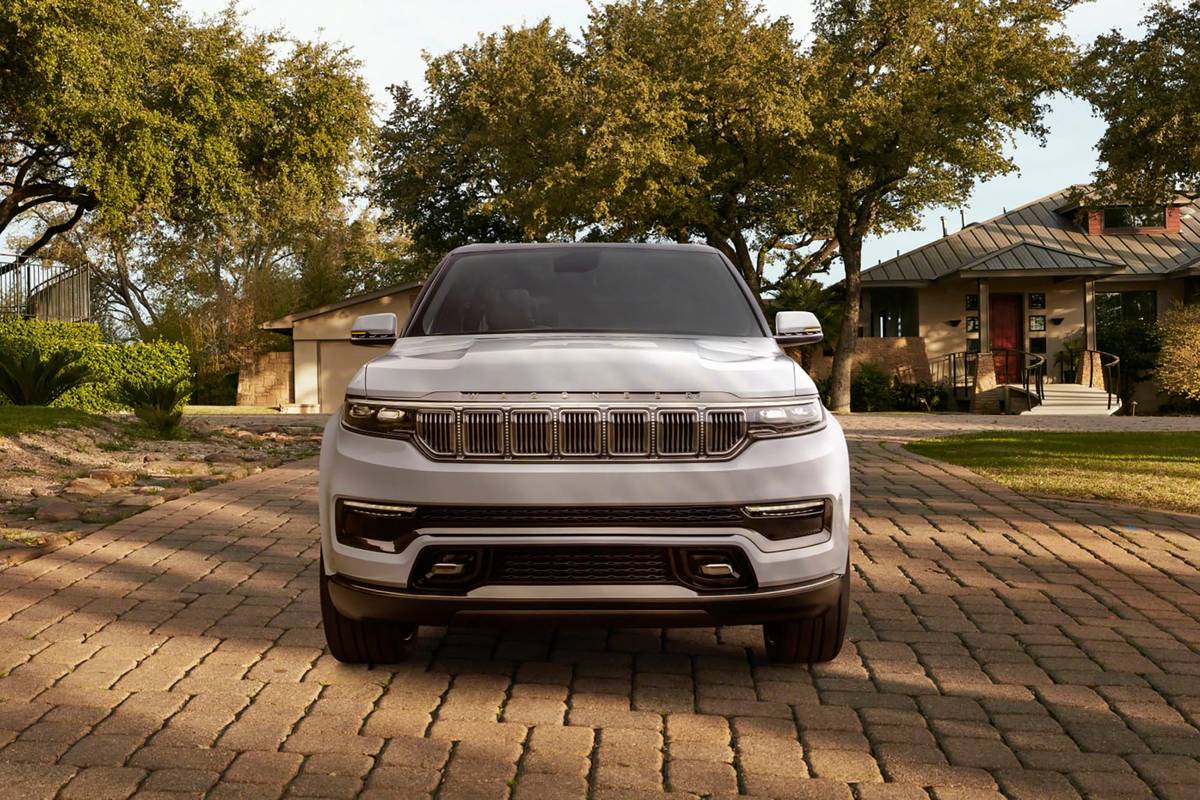 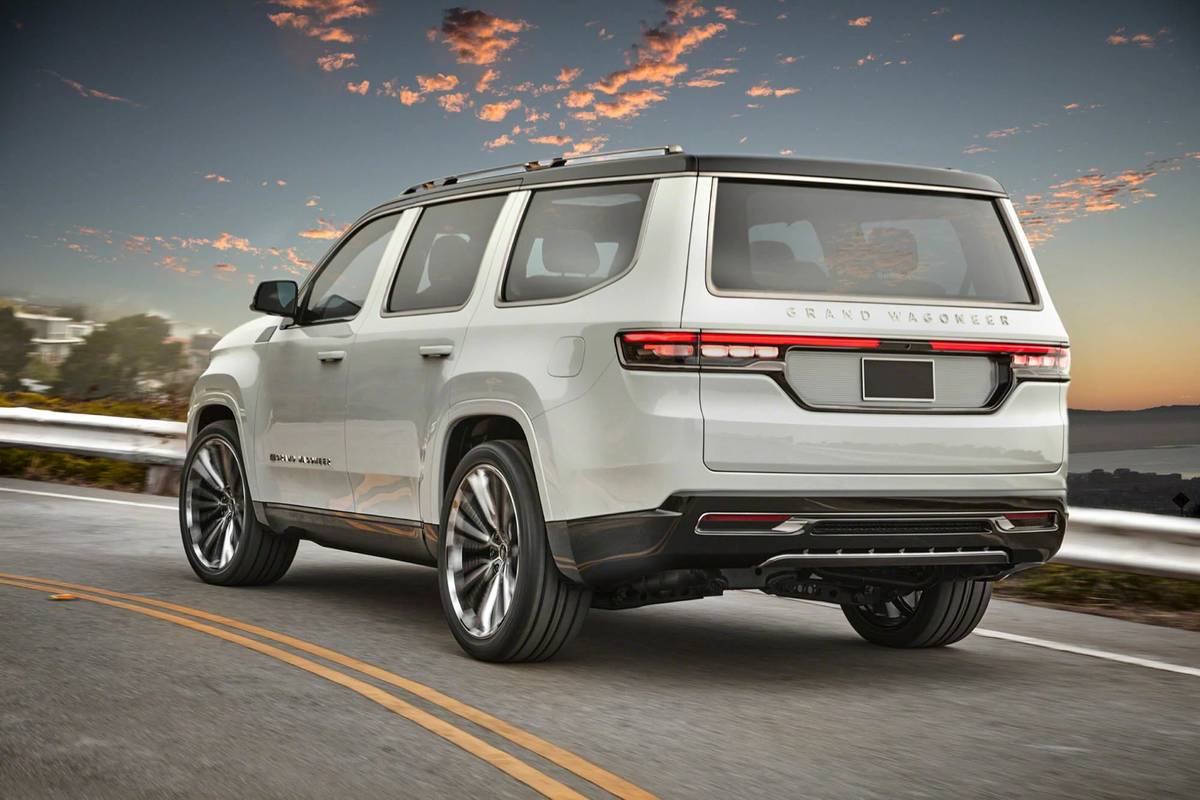 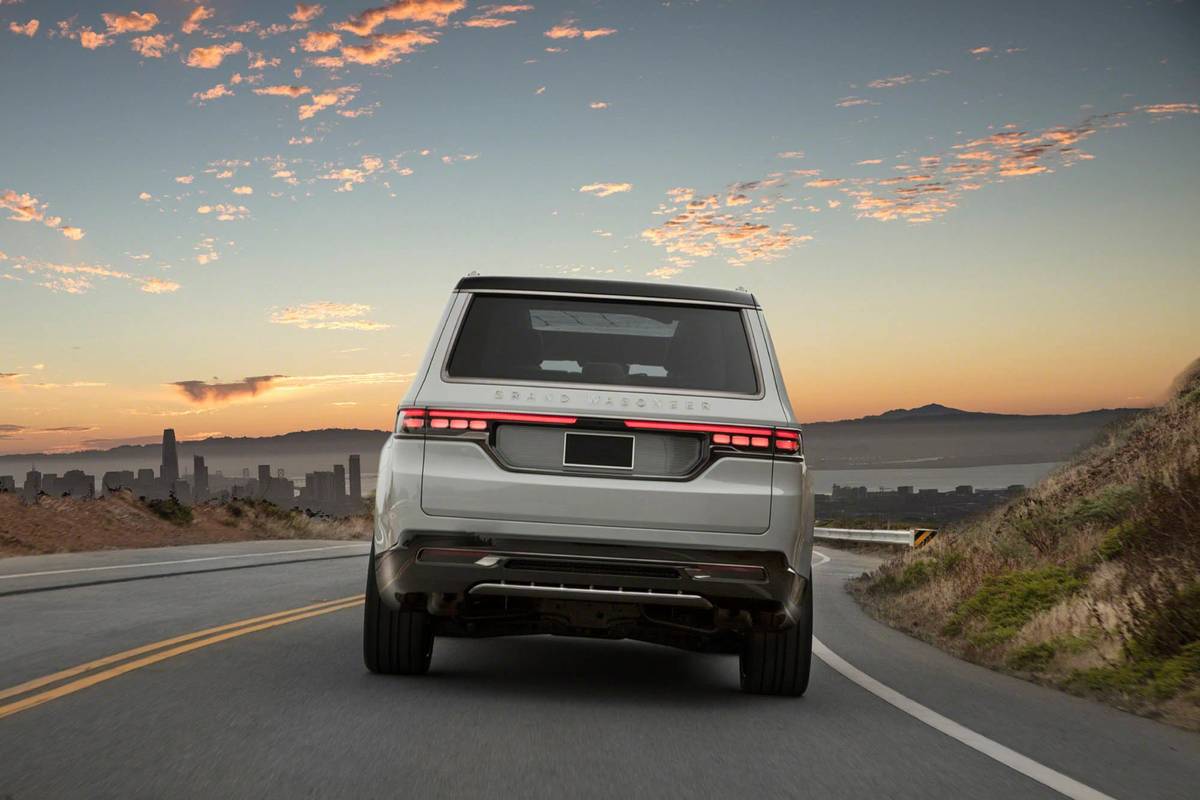 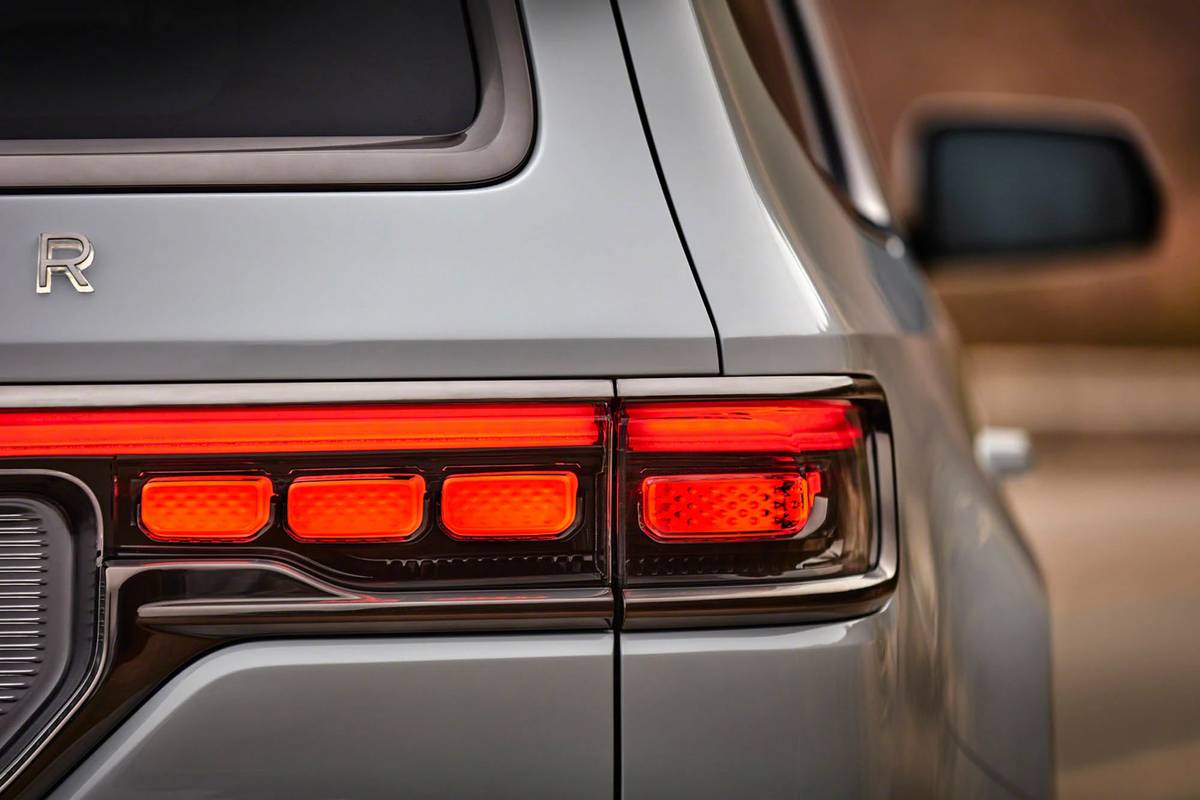 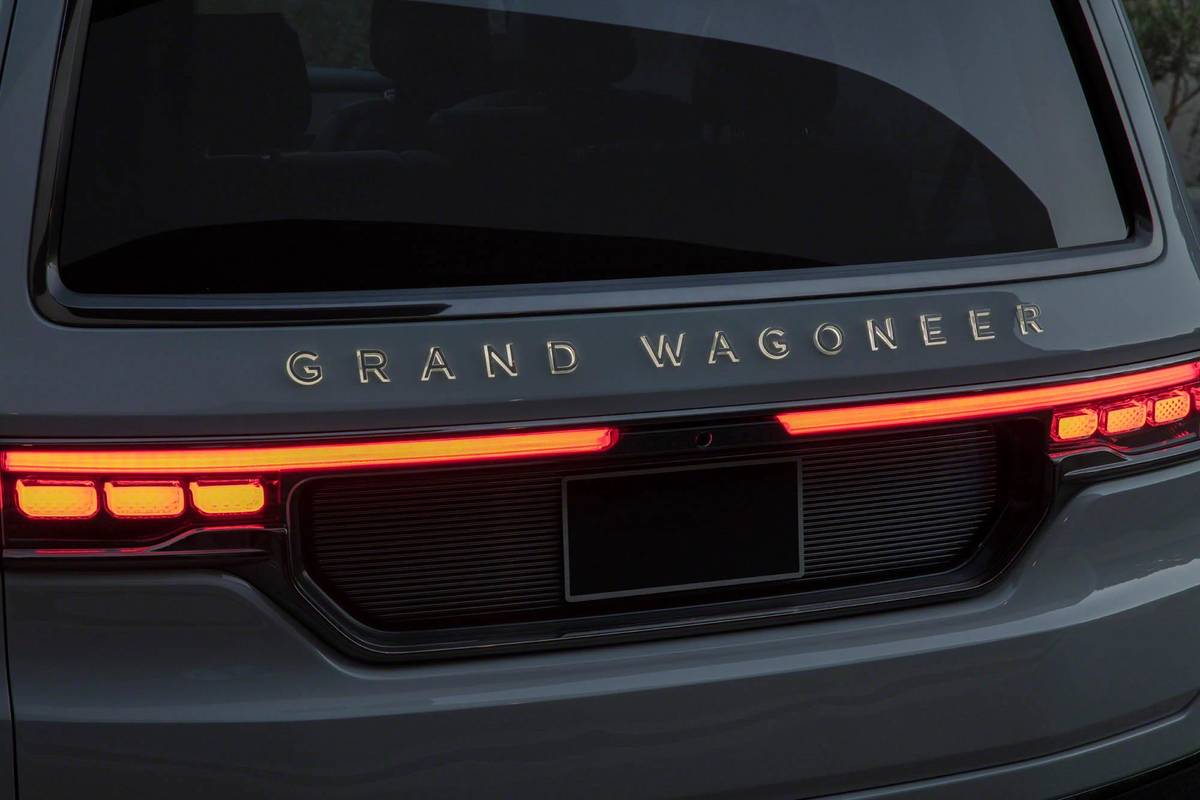 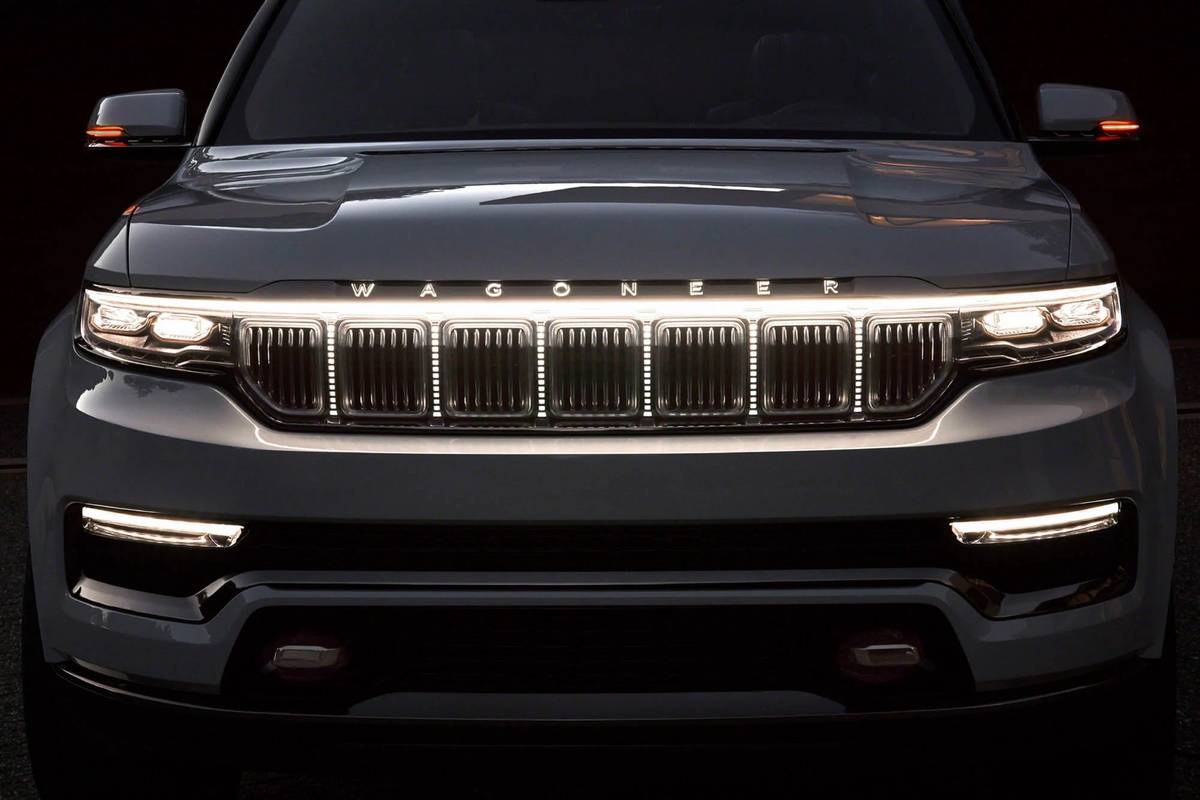 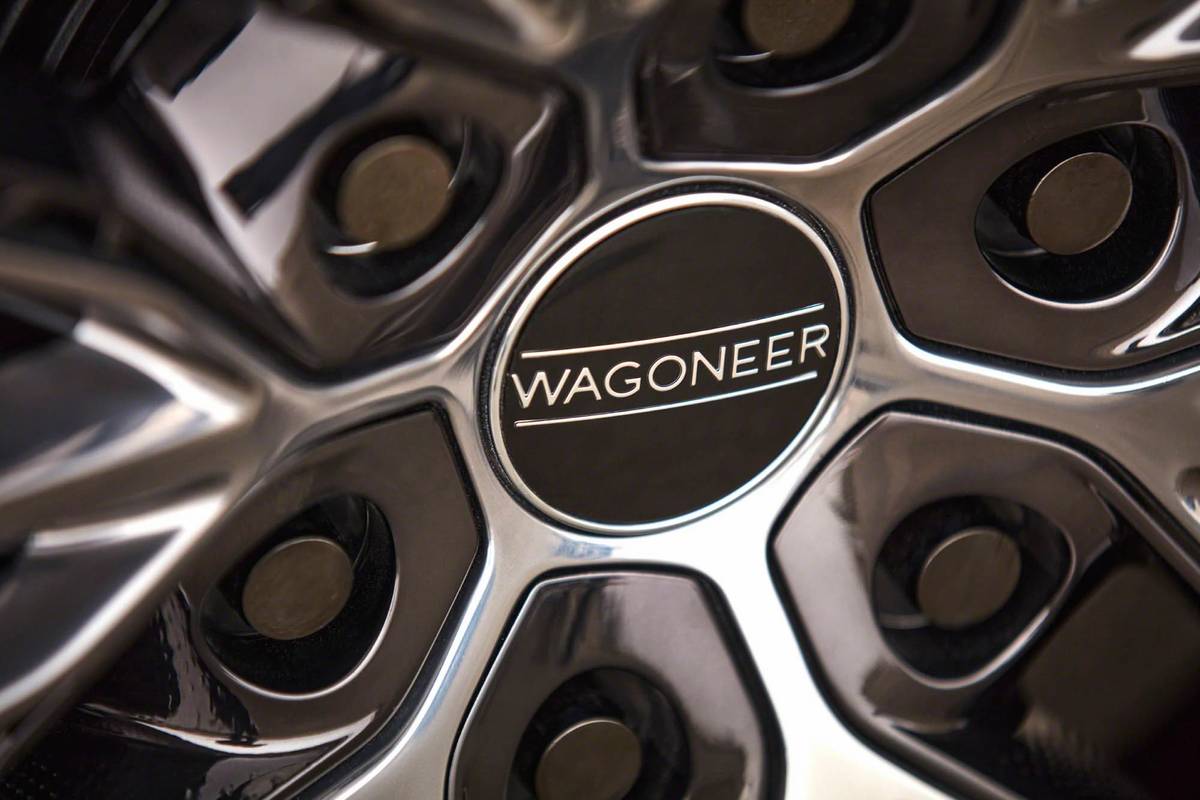 Looks like: A Rivian R1S with a few Jeep styling cues thrown in

Ridiculous features: “Relax” modes that can show a fireplace on every screen of the interior simultaneously

Chance of being mass-produced: It’ll be here in summer 2021

You can’t really call the impending arrival of the Jeep Wagoneer and Grand Wagoneer a “rumor,” as Fiat Chrysler Automobiles, Jeep’s parent company, has made mention of a full-size sport utility vehicle in the Jeep lineup as part of its ongoing five-year product plans that are shared with the media every half-decade. But we now have our first look at what’s coming to showrooms next summer — due to arrive in mid-2021 in a couple different versions.

Related: A Whisper In the Woods: Jeep Details the 2021 Wrangler 4xe Plug-In Hybrid

This is a concept version that Jeep is calling the Jeep Grand Wagoneer Concept, but don’t be fooled — it’s more accurately described as a “noncept,” as what you see here is going to be extremely close to the SUV that arrives in Jeep showrooms. Just how close we’re not quite sure, for while the styling and equipment is surely very close to the finished product, much of the unusual lighting treatment and more eye-popping interior features are just close enough to being possible as to make us wonder if they’ll make it to the production Grand Wagoneer, too.

But let’s start with the outside styling. The most obvious unusual features are the windows that have been very clearly separated by some brightwork chrome trim — but only on three sides, leaving the top part integrated into the darker roof panel. It’s an unusual look, and we’re not entirely sure it works, but there’s no denying that it’s something distinctive in a world of lookalike SUVs. And given how hard it is to make any two-box SUV design look different than others in the category, we’ll give it a tentative nod of approval for now, pending the final production model’s looks.

The rear-end styling is a bit more traditional, but the front includes a sweeping end-to-end light-up grille that combines elements of the original Wagoneer from the 1960s with some modern styling elements. The iconic seven-slot Jeep trademark grille is present, and a nod to the old-style Wagoneer’s kick-up style hood is evident, too. The one-piece clear lens sweeps across and encompasses projector-style lights that have treated wood in the lamp holders, an element that we suspect likely won’t make it to production.

Down the sides are 24-inch wheels with 3D-printed inserts. They look at home in the big trapezoidal wheel arches, a styling element seen on modern Jeep SUVs like the Cherokee and Grand Cherokee, though we’re not sure wheels that big will make it to production either — yet given what Cadillac is promising for the next Escalade, we’re not ready to rule it out.

One element of the exterior that’s sure to see a change for the production model is the door covering the charging port: Jeep says that the concept has an advanced electrified powertrain, but hasn’t provided many details on what it might be. The concept’s charging-port door is a video screen that displays some graphics and charging information, something that’s sure to be changed for production. We don’t know anything about what’s under the hood, aside from Jeep saying that it’s some sort of  electric vehicle powertrain. We’d assume that means it’s a plug-in hybrid, but Jeep is mum on specifics, so your guess is as good as ours.

Inside, it’s a different story: Despite Jeep’s designers giving significant mention to the original Wagoneer as inspiration, there’s nothing retro or even remotely resembling the old, boxy interior on this Grand Wagoneer Concept. It’s big inside, clearly a full-size SUV that outshines the mid-size Grand Cherokee SUV, with three rows that are reportedly spacious enough for full-grown adults.

The dash stretches from door to door, and features a first: a touchscreen in the passenger instrument panel that can display all manner of infotainment and multimedia access. It can stream movies, control apps and even link up with the rest of the screens throughout the Grand Wagoneer’s interior to show the same image in something called Relax modes displaying ambient scenes like a calming fireplace or flying over the surface of the Earth from orbit. (We hasten to note, however, that when all the screens in the car are showing a calming fireplace, it does tend to have the effect of making the interior seem like it’s on fire.) 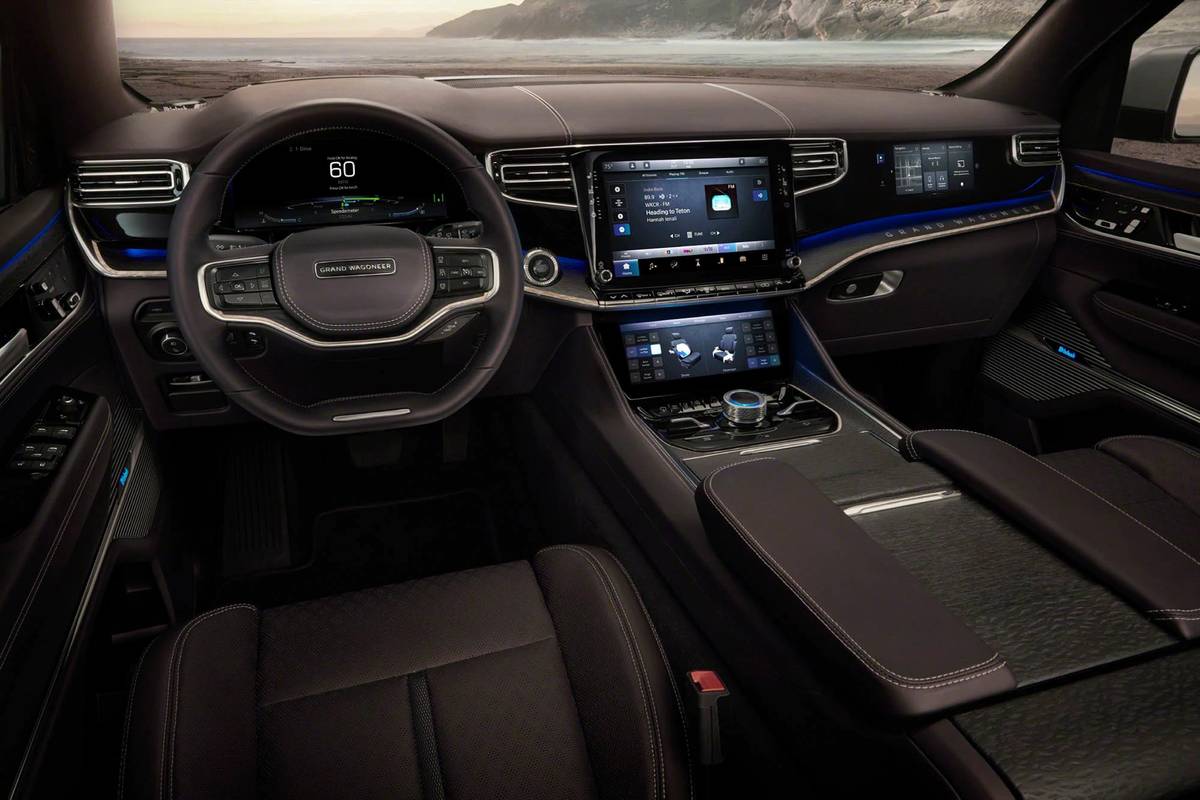 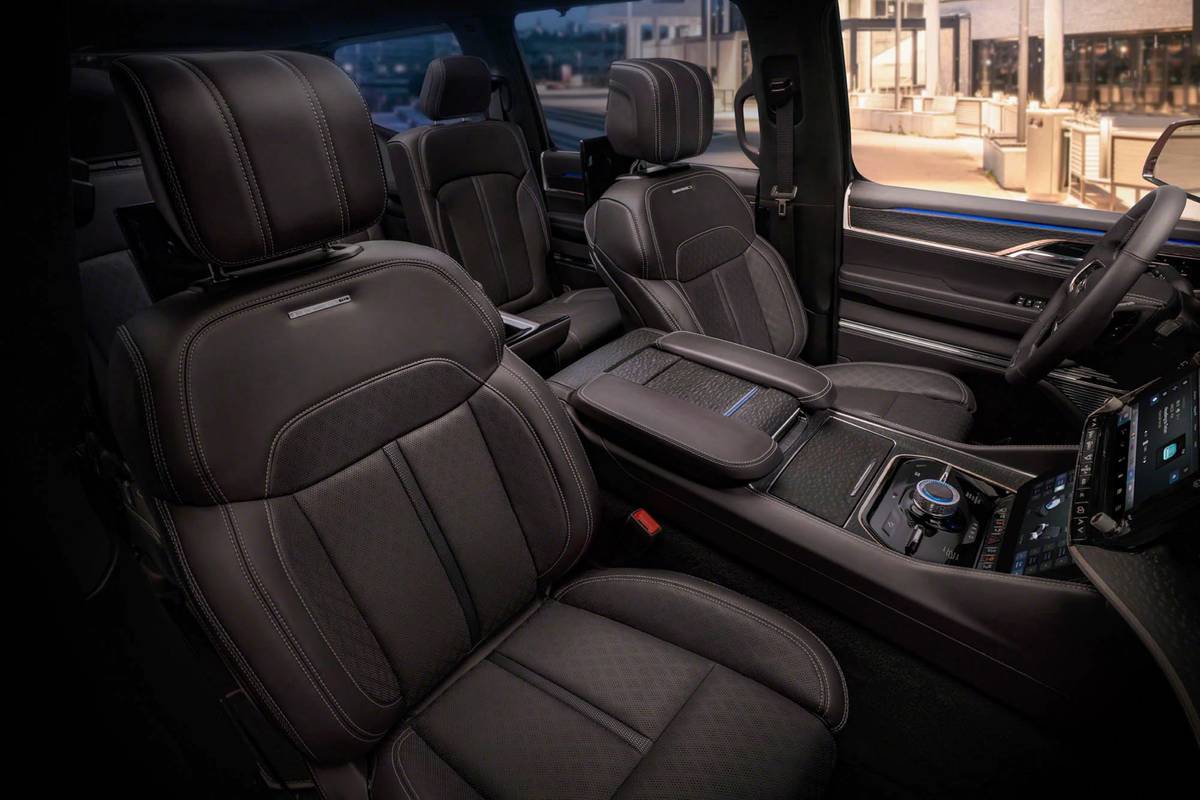 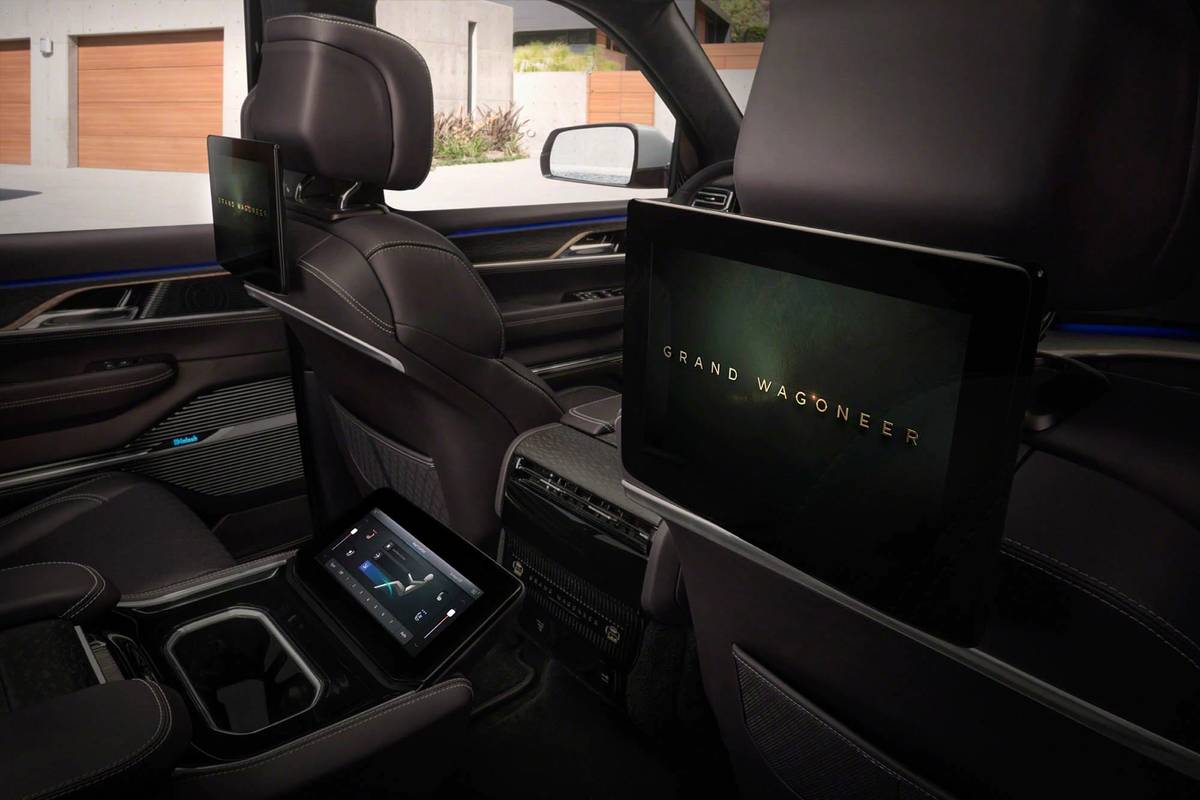 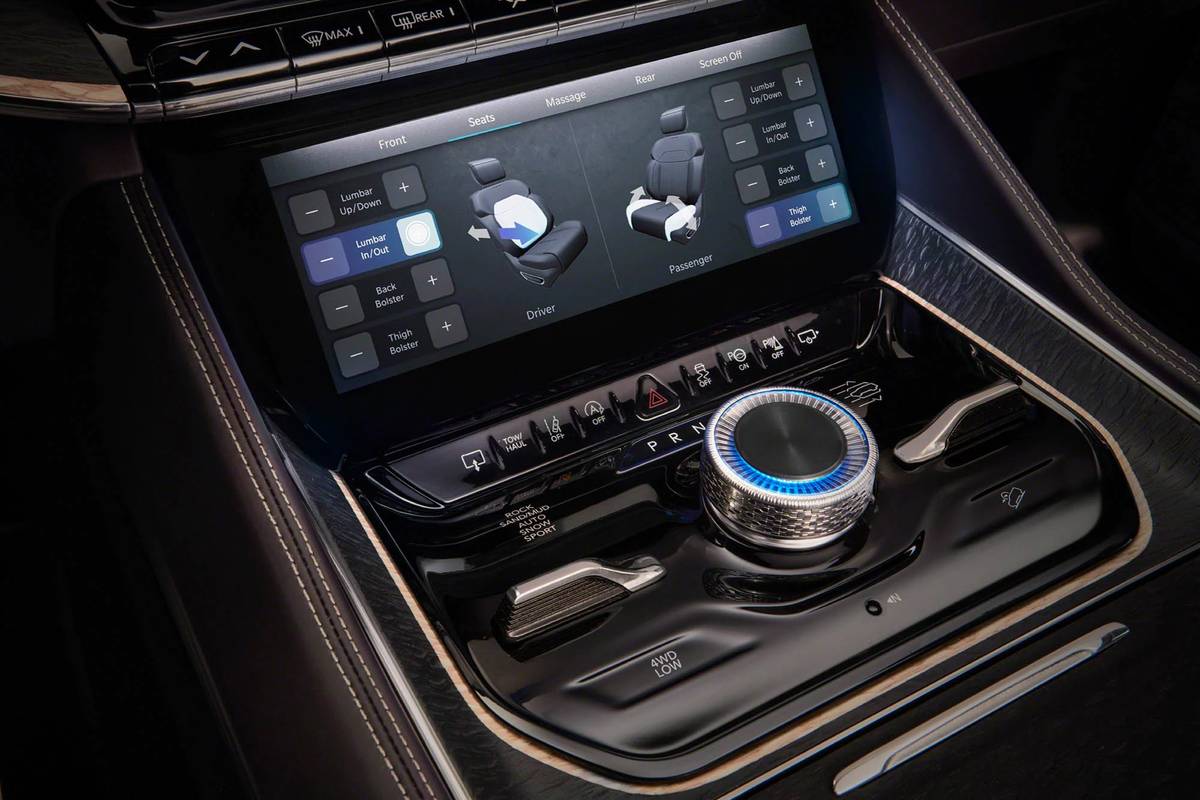 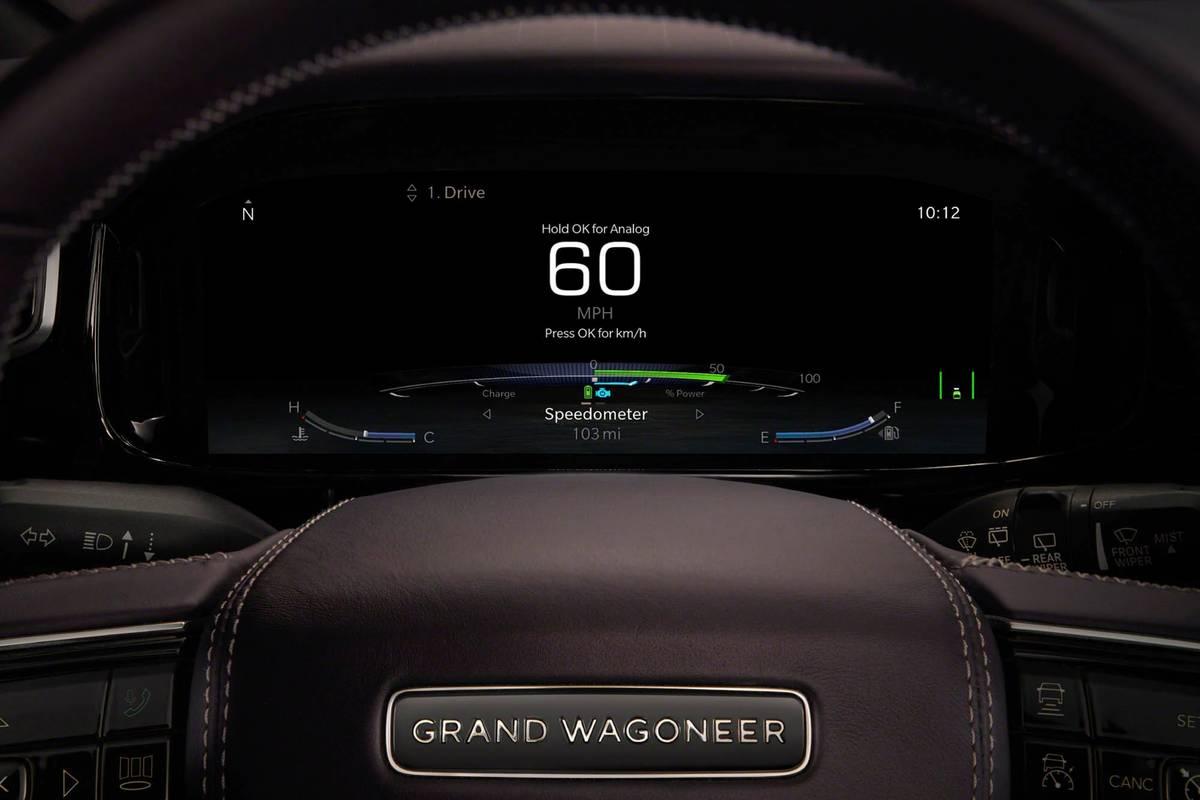 The upscale construction of the interior is the point Jeep wants to get across, however, with material quality and assembly techniques that the brand says represent a first for it in terms of premium fit and finish. Details down to the starter button, which sits in its own wood, black glass and aluminum bezel, or the real wood across the dash with an inlaid Grand Wagoneer logo, or the black glass and metal framing on the McIntosh concept audio system are all meant to evoke a strong luxury feel that Jeep says will enable it to compete with the likes of Land Rover’s Range Rover when the actual Grand Wagoneer arrives. The materials for the Grand Wagoneer should definitely help convey that message, given the beautiful treatments they’ve received.

The idea that everything should be a touch panel, however, counterbalances those luxury leanings, if past customer sentiment is any indicator.

There are more than 44 inches of total diagonal screen area in the front row alone. The passenger display is a 10.25-inch display, but it isn’t actually viewable from the driver’s seat due to a special polarized film to prevent driver distraction. The new Driver Control Center is a screen with haptic feedback buttons for climate and seat controls, and articulates out of the way to reveal a hidden storage area in the console.

There’s another screen for the rear seats that does many of the same things. Hopefully the idea that all of the controls and switches will be touch-sensitive panels doesn’t make it to the production vehicle; both Lincoln and Cadillac learned the hard way that customers just don’t like interiors where nothing is an actual button and everything collects fingerprints, and we’re not big fans of the idea ourselves. It’s hard to convey “luxury” when the precision movement of a button or switch is eliminated.

Pricing and Other Predictions

So how much of what we’re seeing here is likely to show up in the finished product? Well, aside from some of the more creative lighting effects on the outside, it’s a safe bet that this is really, really close to the Grand Wagoneer that’s heading to showrooms about a year from now as either a 2021 or 2022 model.

Jeep executives told the media that the strategy will center on two vehicles under the Wagoneer nameplate: The more basic Wagoneer will start around $60,000 and will target premium brands like GMC, while the fully loaded Grand Wagoneer like the one you see here in concept form will put Range Rover in its sights — and is sure to hit the $100,000 mark.

The vehicles will offer three different 4×4 systems and the Quadra-Lift air suspension, as well. We’ll have to wait a bit longer to see exactly what Jeep delivers, likely sometime early next year.