Our 1993 Audi S4 trim comparison will help you decide.

Audi calls the S4 sedan the “spiritual successor” to its former 200 Quattro.

Most cars fall short of providing religious experiences-though a couple times when we’ve slammed our fingers in the doors there was a brief one-way conversation with the Lord.

Being a spiritual successor is a heck of a reputation to live up to for a car.

Perhaps by “spiritual” Audi refers to the fact that several years ago people charged that some of its cars seemed to take off on their own as if ghost-driven.

More than likely, Audi means the S4 was designed to don a halo for the performance, ride and handling the 200 Quattro lacked.

We’ll buy that. The S4 provides exceptional get-up-and-go with its 2.2-liter, 227-horsepower, 20-valve, 5-cylinder, turbocharged engine, as we experienced on several occasions when choosing to sprint from the light and leave other, more mortal cars in our wake. Through five gears the 2.2 is really a blithe spirit.

One objection to most five-cylinder engines is that the odd order means they tend to be a bit noisier than a V-6 or V-8. However, the S4’s five-cylinder was whisper-quiet. The 0-to-60 claim is 6.2 seconds, while top speed is electronically limited to 130 m.p.h. to ward off the Walter Mitty in all of us from taking over.

The price you pay for above-average quickness and quiet, however, is an 18 m.p.g. city/23 highway mileage rating.

While focusing on power, the S4 doesn’t shortchange safety. Driver- and passenger-side air bags and four-wheel anti-lock brakes are standard. And while designed to contribute to performance, the full-time all-wheel drive, speed-sensitive power steering and even the four-wheel fully independent suspension serve dual roles by helping control contact with the road and the driving environment.

All-wheel drive means the S4 grabs the pavement and won’t let go; speed-sensitive power steering means you get added power assist tomake those low-speed parking-lot maneuvers without fumbling or stumbling or needing two chances to slip between two cars at the mall; while the independent suspension provides just enough cushion to prevent jarring and jostling when you opt to motor around aggressively.

If allowed two suggestions to make the ride even more pleasant, we’d add a layer of padding to the bucket seats or soften the foam a tad, and we’d get rid of the Z-rated, 16-inch performance tires that are standard on the S4.

On flat pavement those very wide tires perform as if coated with glue. They’re so wide you get an ample patch of rubber in contact with the road. However, when the pavement is uneven, such as on some stretches of expressway or interstate that are deeply grooved from constant heavy-truck traffic, those tires tend to wander left to right and right to left as if trying to seek a level plane. It’s a most unnerving feeling.

We finally discovered where the spiritualism comes into play.

That’s a hefty price and within chump change of a Lexus LS400. The Audi is more lively than the LS400, but the Lexus gets the nod in terms of room, comfort, styling, and the ability to tour all day without having to change positions in your chair to relieve the pain.

European-car enthusiasts who thumb their noses at U.S. or Japanese luxury performance cars will be pleased with the responsiveness of the S4. Get rid of the Z-rated tires and they may even smile. Of course, if you have roughly $50,000 to spend on a car, why would you have any reason to frown?

October 8, 2011
By mutlow from Belvedere, CA
Owns this car

This is the best car I have ever owned and the best Audi I have ever owned out of 4 Audi's in the past 25 years. The reliability is unbeatable, build quality is perfect and you cannot compare later Audi build quality. The 1992-1997 S4/S6 are the finest. Engine is bulletproof and highly tune-able. Easy to get the HP up to 320+ and maintain excellent reliability. The interior leather quality beats my 1988 M5 and other recent classics. The Recaro seats in this care are superior evn to the Euro RS2 built in 1994-1995 with Porsche. Find one and buy it!

Most Practical Car I've Ever Owned

The 1993 Audi S4 has mushy handling because the front sway bar acts as a stabilizer arm to keep the front tire from hitting the front and rear of the wheel well. The sway bar has some play in it, and also makes the front suspension hard to work with. The car also has no rear sway bar, and the frame twists and contributes to the mushiness because the front is held flat by the sway bar and the rear is free to twist. A rear limited slip differential would do the car a lot of good, but the Quattro is unmatched by any vehicle I have ever driven except newer Audi?s. The battery is below the rear seat which helps with security, and the car does have a lot of space under the hood which makes the engine easier to work on than any other car I have ever owned. The interior is the best blend between luxury and sport for any car of its age I have ever driven. If you are into sports cars you can drive this car and have fun with it, while someone who just wants a quality car can drive it and get lost in its luxurious interior. Audi dealer work is expensive so if you buy this car, be prepared to do all your own work. 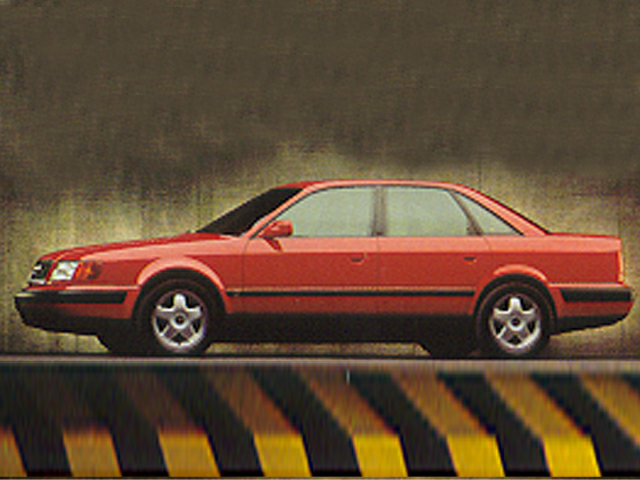