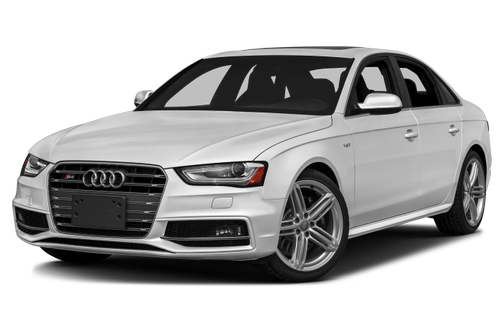 Our 2016 Audi S4 trim comparison will help you decide.

Verdict: The 2016 Audi S4 is an aging but still highly entertaining sport sedan. It’s not as hard-edged or wild as the top sport sedans in the class, but it’s much easier to live with on a daily basis, with a comfortable and well-built interior, easy-to-use multimedia system and styling that flies under the radar.

Audi is set to offer a new and updated 2017 S4 later this year, but the current S4 still is a formidable machine worthy of a last look before it rides off into the automotive sunset. Featuring a strong supercharged V-6 engine, six-speed manual or seven-speed dual-clutch automatic transmission, sport suspension and Audi’s famed Quattro all-wheel drive, it’s a legitimate sport sedan. Changes from the 2015 to 2016 model are minimal given its impending replacement, limited to minor trim package feature changes (see if you can spot any differences here). Competition in this category is stiff, with just about every major luxury automaker on the planet offering up hotter versions of their basic compact luxury sedans. With a new S4 on the way, though, is the current one worth buying on its own merits?

Exterior & Styling
If you’re a fan of brand styling continuity, you’ll love the 2016 S4. Heck, you’ll love just about any Audi. The S4 got a minor freshening for 2013, which was itself just a minor freshening from 2010. The look still is clean and attractive, but as we’ve noted before, it’s not all that different from the base A4, especially if you get that A4 with the S-Line trim. It’s a different tack than some other automakers take for their hotted-up sport sedans in that the S4 blends into the rest of the lineup, advertising its more exclusive status only with subtle styling tweaks and a couple of S4 badges on the trunk and grille. Your best way to spot an S model remains the matte-silver mirror caps that you won’t find on lesser Audi models.

How It Drives
Comparing the S4 with more raucous sport sedans such as the BMW M3 or Cadillac ATS-V is unfair — it’s not nearly as powerful or visceral as either of those. But neither is it as expensive as either of those cars. It’s a performance upgrade to the competent yet unexciting regular A4, something more akin to the BMW 340i or Mercedes-Benz C450 AMG. A supercharged 3.0-liter V-6 making 333 horsepower provides plenty of on-demand thrust that’s just a quick stab of the go-pedal away, with plenty of power across the rev range. A six-speed manual is standard, and it’s a smooth, slick-shifting unit with a light clutch and easy feel, although the throws are a little long. An excellent seven-speed dual-clutch automatic is optional. The S4 may not be the car I’d choose for track-day duty, but it’d be the one I’d pick for a daily commute that needed spicing up.

The standard Audi Drive Select function adjusts engine response, exhaust noise and power-steering assist at the touch of a button, but not the suspension firmness — you’ll have to cough up a little extra money for the magnetic adjustable shock absorbers, which my car did not feature. The S4’s suspension is tuned to be sportier than the A4’s, but it’s not harsh or difficult to live with in the least. My week with one encompassed highway cruising and downtown Chicago potholes, and never once did I have a complaint about the way the S4 absorbed all of it. The price you pay is in handling and steering response that isn’t as sharp as some competitors, such as the 340i, but the S4’s approach doesn’t tax you over longer hauls. Interestingly, for about the same price as this S4 you can go for a loaded S3 that does include the magnetic dampers and just about every bell and whistle. It’s tighter dimensionally, but feels considerably sharper and more raucous, despite featuring a much smaller engine.

The S4’s supercharged V-6 gets decent, if not stellar, fuel economy. The car with manual transmission is EPA-rated at 17/26/20 mpg city/highway/combined, and it averaged 19.9 mpg during my week with it, which included a 500-mile jaunt from Ann Arbor, Mich., to Chicago and back, with plenty of urban driving as well. That’s a perfectly acceptable result, given the way in which I kept finding myself driving the S4 — with much alacrity and enthusiasm. Competitors’ ratings all are more efficient than the S4, with the BMW 340i xDrive at 20/29/23 mpg with manual transmission. The automatic-only Mercedes-Benz C450 AMG is rated at 21/29/24 mpg and Cadillac ATS 3.6 all-wheel drive at 19/28/22 mpg.

Interior
The cabin has the high quality that we’ve come to expect from Audi, with solid materials all assembled in a way that makes it feel as if much of the cockpit was milled from a single block of plastic and metal. While the designs might finally be looking a little too familiar, nobody can argue with their upscale feel. Audi interiors have looked like this for a decade, but they still feel class-leading in fit, finish and material quality. It might be time for some more adventurous styling, however.

One can’t argue with the comfort provided by the sport seats in the S4, either. They look aggressively bolstered, but slip into them and you’ll be surprised at how flat they feel. This allows for a wider variety of body shapes to be comfortable in them, but reinforces again the idea that the S4 is not an M3 or ATS-V competitor — if you really try to toss it around hard, nothing holds you in place.

Taller drivers might have an issue with the moonroof as well, which intrudes into headspace even when the seat bottom is adjusted to its lowest position. The backseat is suitable for shorter trips or kids; two adults will find it cramped for legroom and three will be downright uncomfortable in any dimension. Outward visibility is excellent all around; the S4 seemingly has slimmer pillars than many other modern sedans, and has a belt line that’s low.

Ergonomics & Electronics
The S4’s MMI multimedia system still is one of the most intuitive on the market, and it’s actually a shame that newer Audi versions aren’t quite as good as this previous-generation system. The central selector dial is flanked by four additional buttons that correspond to the four corners of the display screen, making feature selection a breeze. Dedicated mechanical buttons also are present for nearly all of the functions controlled by MMI, including one for the Audi Drive Select, a feature that’s gone away in some of the newer Audis, much to our disappointment.

My test car featured the formidable Bang & Olufsen optional sound system, which comes in the Technology Package along with navigation and a backup camera. The B&O audio is excellent, with both clarity and deep-bass response that makes just about any music sound true and vivid. What’s not so hot is that this model of Audi still uses a proprietary smartphone hookup (with an old Apple 30-pin connector, in my test car’s case) located in the glove box, instead of a simple USB port. This has been changed in recently updated Audis, but remains an annoyance in this one when trying to plug in a smartphone. Despite this inconvenience, the Technology Package still is a worthwhile option to add, considering that the navigation system also provides Google Earth mapping for a realistic position display.

Cargo & Storage
I’m always surprised at how much luggage just about any Audi can hold, and the S4 was no exception. It swallowed three good-sized suitcases in the back without complaint, with more room available if needed thanks to standard folding rear seats. The S4 provides 12.4 cubic feet of cargo room back there, which is comparable to its competitors. The Mercedes-Benz C450 AMG arrives with 12.6 cubic feet, while the BMW 340i bests them with 13.0 cubic feet. Only the Cadillac ATS comes up a little cramped with 10.4 cubic feet of trunk space.

Safety
The S4 scored five stars overall in the National Highway Traffic Safety Administration’s crash tests. The S4’s electronic safety equipment offerings aren’t as extensive as some more recently updated models and, as in most German luxury vehicles, they’re almost all extra-cost options. Most of them come in the $4,000 Technology Package, including the backup camera, blind spot monitor and parking sensors. See all of the standard equipment here.

Value in Its Class
The S4 starts at $50,125 including destination fee, and it includes a significant amount of standard equipment, such as bi-xenon headlights, a power moonroof, a real leather and faux-suede two-tone interior, a leather-wrapped steering wheel, 12-way power sport seats and automatic climate control. Add in striking Misano Red pearl paint for $575, the Technology Package for $2,300 (it comes with a $1,700 credit on its $4,000 list price) and 19-inch wheels for $800, and you come to a not-unreasonable $53,800. That’s not the limit of the S4’s price, however, as it doesn’t include an automatic transmission, the magnetic damper package, automatic distance-keeping cruise control or the rear sports differential. Total bill for a loaded S4 can top $66,400.

The S4 matches up well with direct competitors. The BMW 340i, for instance, features a similarly powerful 320-hp, twin-turbocharged inline six-cylinder engine, optional all-wheel drive and a starting price with destination just $1,330 less than the S4’s. Just like the S4, that price climbs rapidly when you start adding options such as sport suspension, nicer leather interiors (vinyl still is standard, believe it or not) and safety equipment. Load up the BMW, and you’ll be out the door for about $63,000, a bit less than the S4. The Mercedes-Benz C450 starts a little higher, at $51,725, but comes with a 362-hp V-6 and a standard seven-speed automatic transmission (but not standard leather upholstery, either). The options are a bit crazy, however, with the ability to option one up to nearly $75,000 if you’re not careful. The bargain of the group is the Cadillac ATS 3.6, with a 335-hp, naturally aspirated V-6; all-wheel drive; and a standard eight-speed automatic transmission for the low starting price of $44,335. And unlike the Benz and BMW, the Caddy includes a leather interior and backup camera. Compare all four competitors here.

My new (to me) certified preowned Audi S4 is everything I wanted in my new car. It is stylish, comfortable and well worth the price. I love it!

From the exterior styling to interior comfort this car is the favorite of all my cars. I was a BMW owner prior to this and feel that it is a better car in all ways.

i buy 3 week ago.this car fast.but 18/28 miles/gallons .so so with supercharged engine.i think if next moldes more bigger is better! 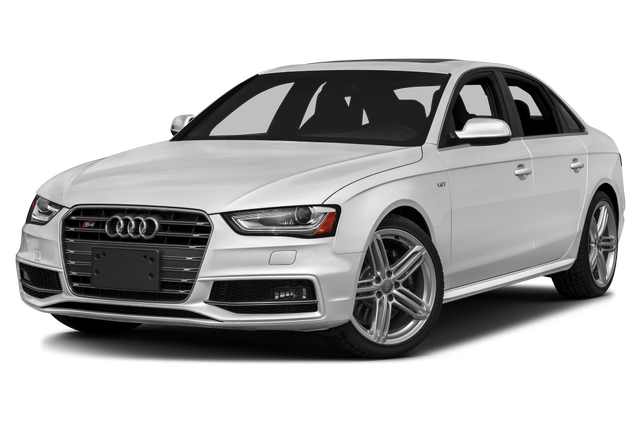 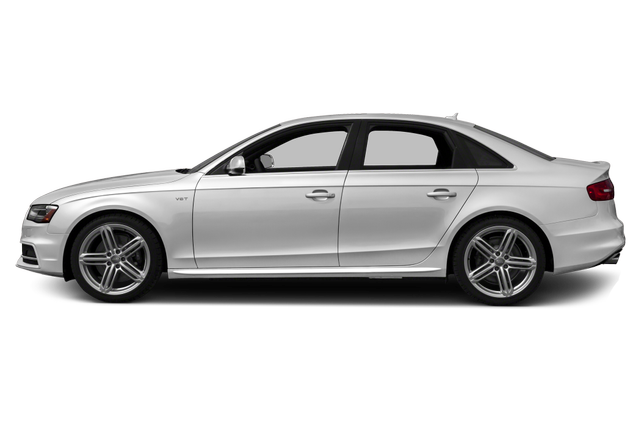 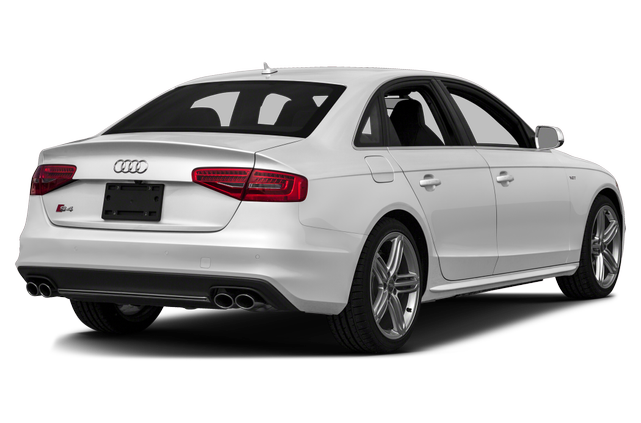 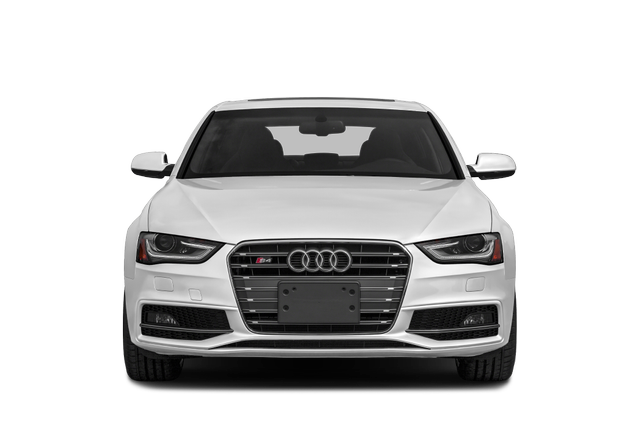 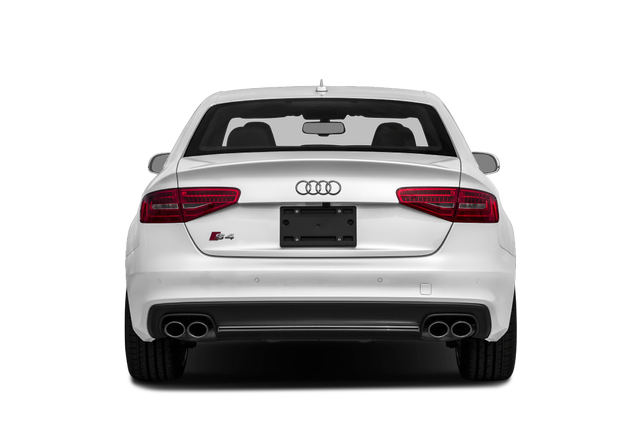 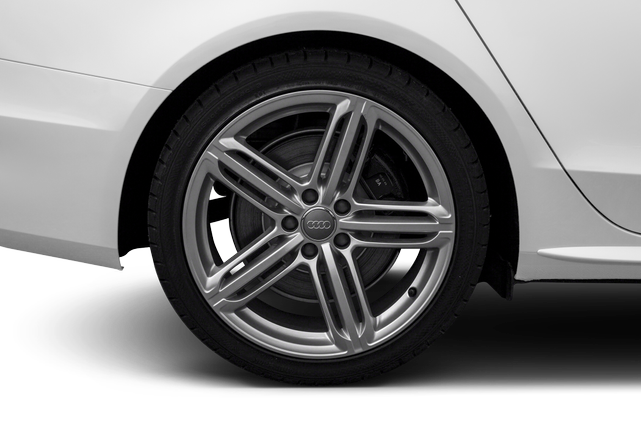 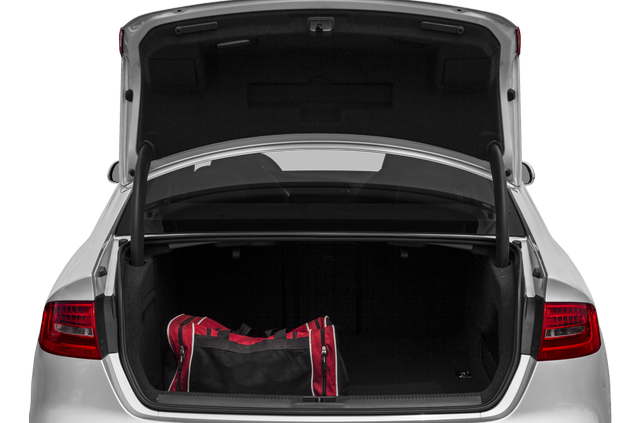 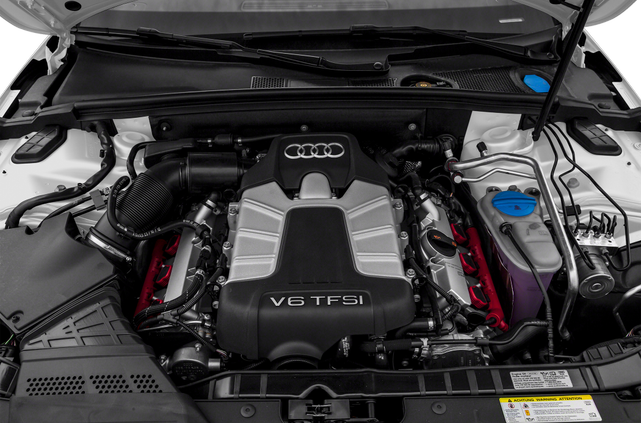 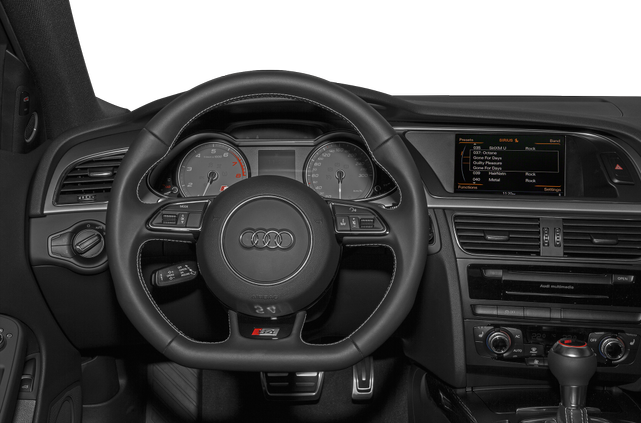 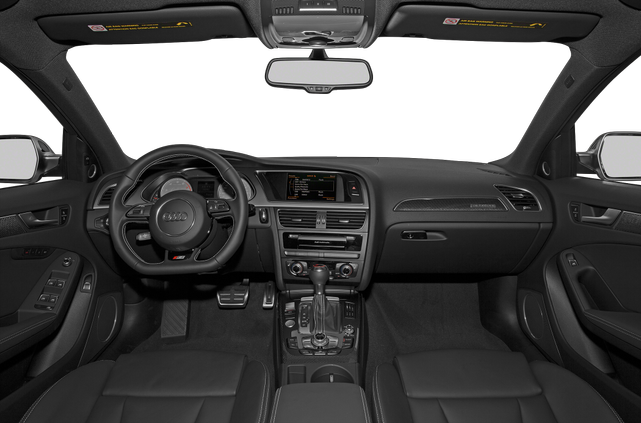 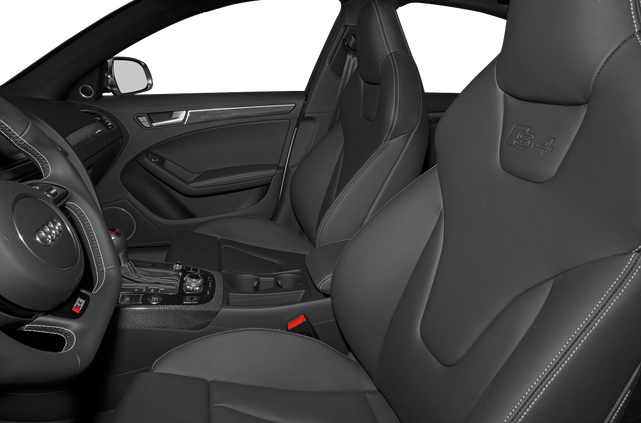 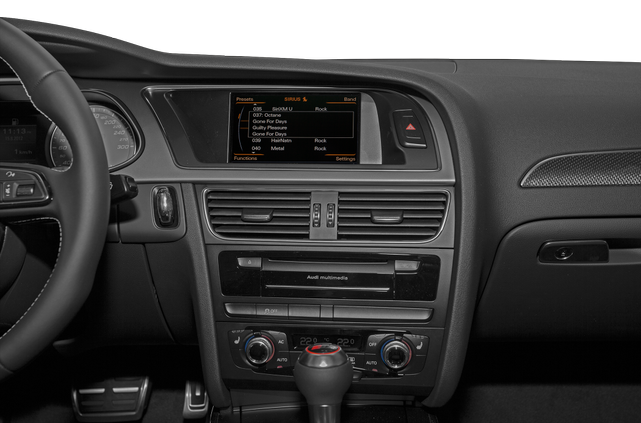 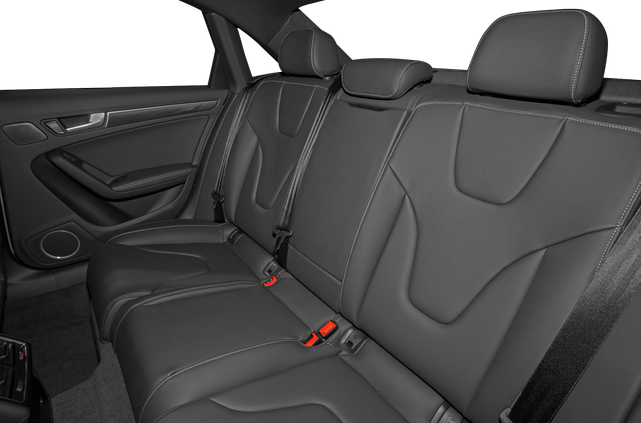 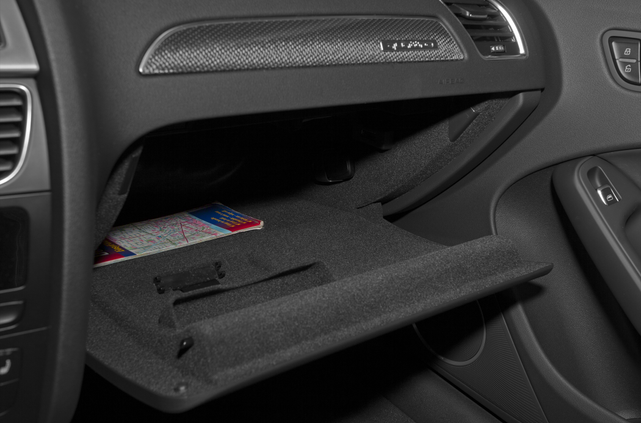 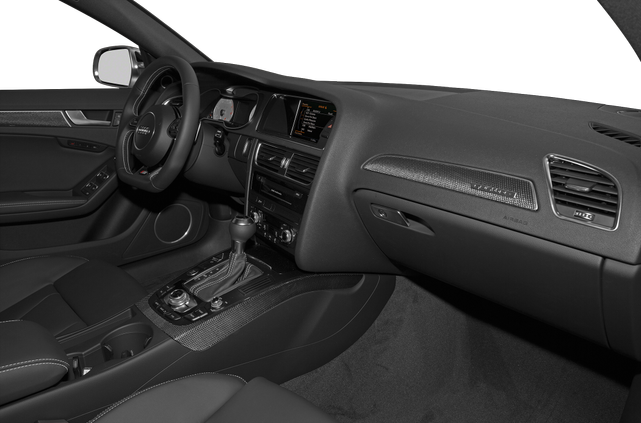 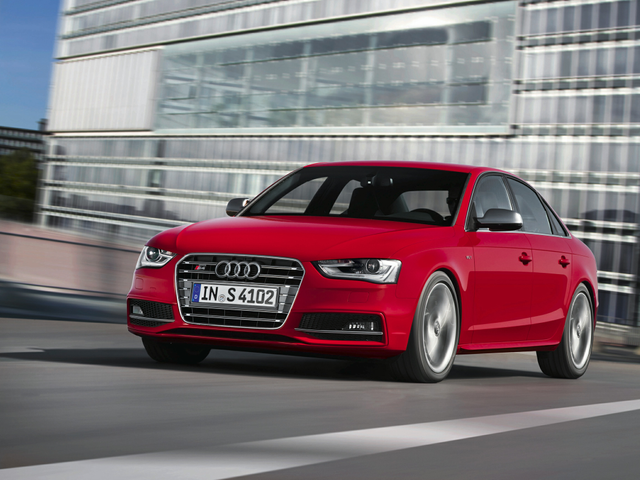 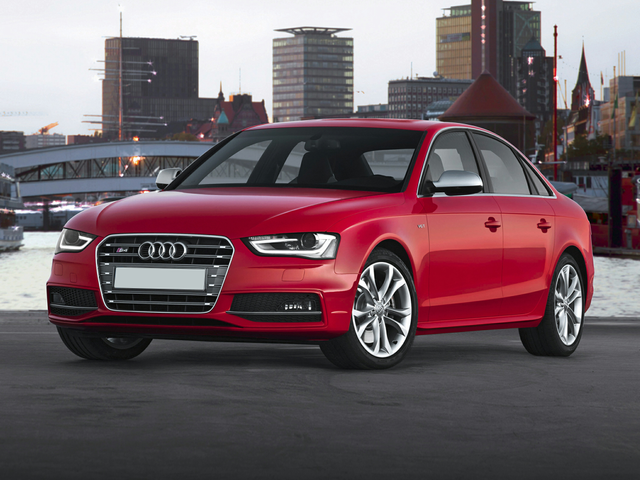 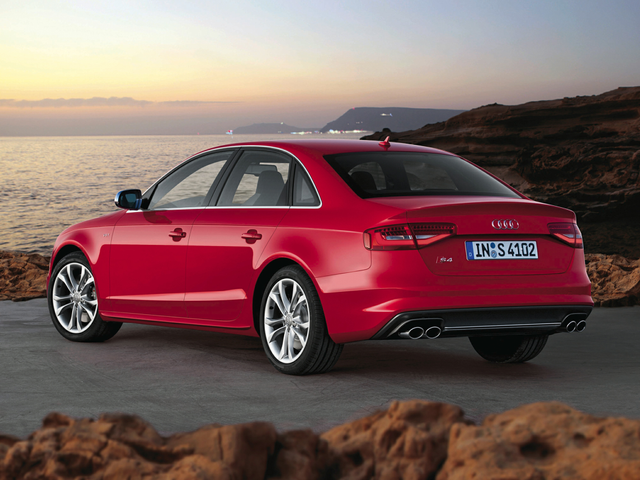 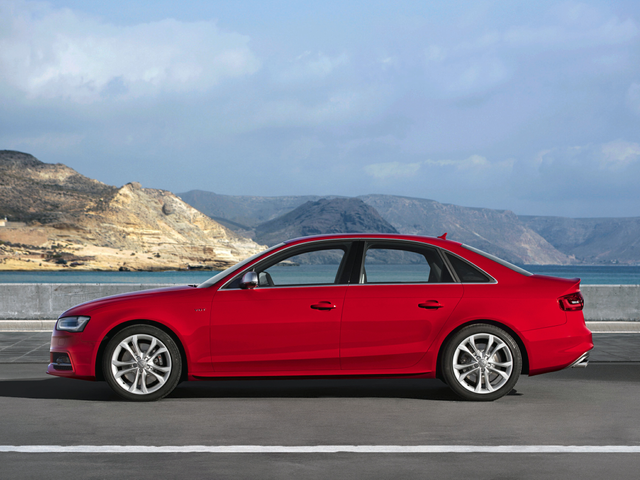 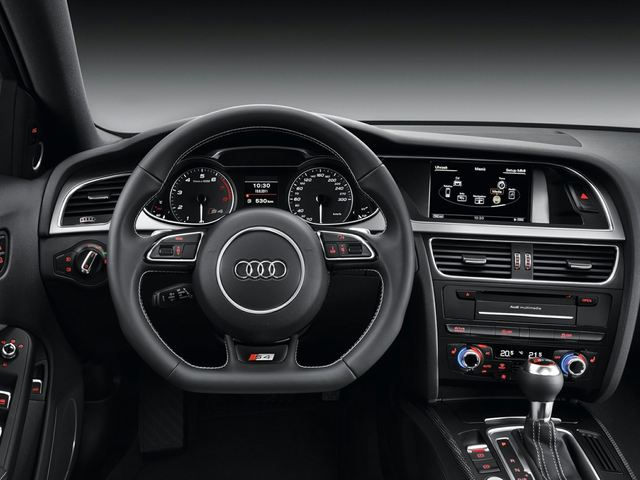 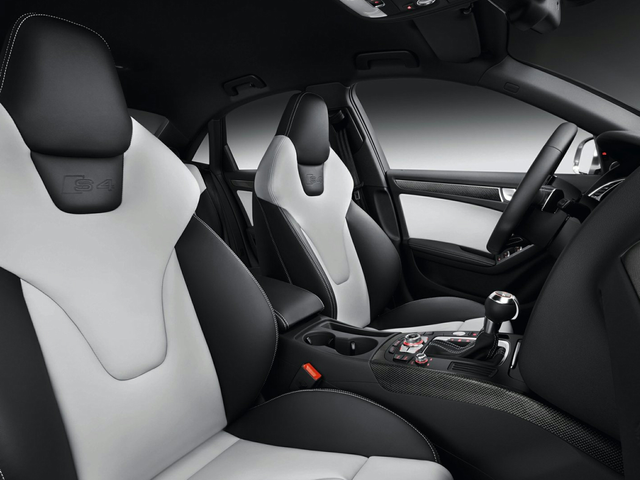 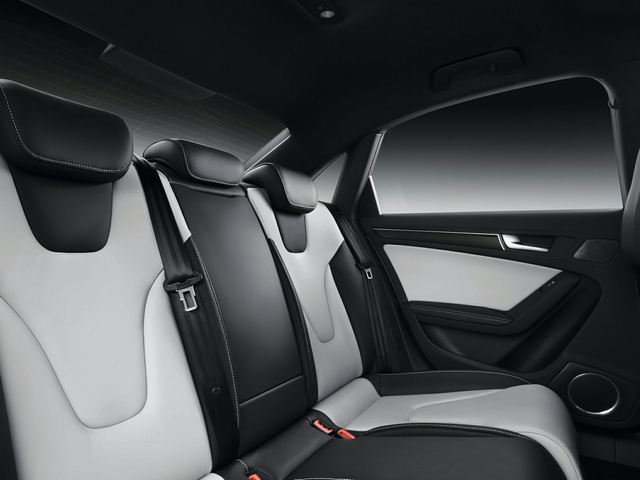