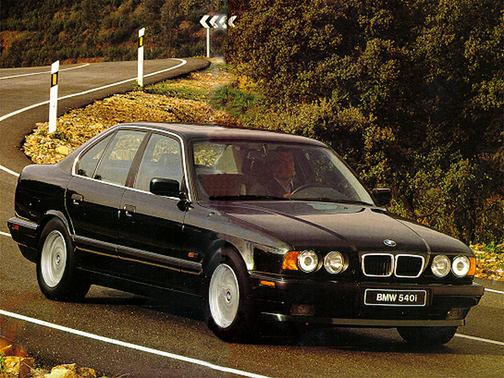 The wife spotted the vehicle, too, raced to the closet and yanked out the uniform hanging there for just this occasion-double-breasted suit, hand-painted silk tie, white shirt with initials on pocket and cuffs, two socks of the same color, a pair of wingtips and the bottle of cologne without a hotel name on the label.

Yes, you guessed it, it was a Bimmer-the 540i sports sedan.

“Puuulllleeeezzzze,” we begged the wife. “Every time we put those duds on when driving a BMW, people stop us at traffic lights to ask the price of pork belly futures or if we want to join the Chicago Bar Association.”

As usual, however, the pleading didn’t work, and we set off to slip behind the wheel of the machine of choice of those who not only wear Gucci and Pucci, but who also know those guys’ first names.

Regular readers are aware that we typically hold Bimmers suspect as overpriced and overrated machines that gained fame and notoriety as the “poor man’s” Mercedes before the folks from BMW started believing the press clippings and priced their vehicles at levels that would make Benz blush.

Then, too, though BMWs traditionally have been built to breathe fire on autobahns, we’ve searched the road atlas for years and haven’t found an autobahn in the greater metropolitan Chicago region-just a bunch of roads filled with construction barricades and, therefore, bumper-to-bumper traffic between March and November.

To say the least, we entered the BMW 540i with trepidation, which lasted only about two minutes-the time it took to heat the boiler, fasten the belt and reach second gear.

The540i is a little gem, a high-performance sports sedan with a whisper-smooth rocket in a 4-liter, 32-valve, 282-horse-power, V-8 rocket.

Each forward gear forces you back into the leather bucket as the slippery smooth 6-speed manual, offered for the first time in the 540i, coaxes every ounce of energy out of the V-8.

The tires don’t just grab the pavement, they lock on. Take a turn, take a turn at speed, take a turn at a bit too much speed, and the car sits flat and you sit erect and in total control.

Safety isn’t just air bags and brakes-though dual air cushions and anti-lock brakes are standard-it’s also command of the road. In the 540i, you own it.

Then Ma Nature dumped a light load of snow/sleet on the pavement, just enough so the tire tracks approaching the stop sign looked as if two huge rubber serpants had gotten there first.

You promise to tread lightly, until you remember that the 540i comes with traction assist to keep you pointed straight and sitting upright even when the road surface is dusted in frozen dew.

This is about as close as you get to motoring utopia, even if the folks fro m BMW still insist that the only good seat is a granite one, and the narrower the better. And attached to those seats are headrests of so large they block vision when backing up.

While we’re listing gripes: If you’ve got more than one passenger, the one getting the minuscule back seat better be kin and good-natured to boot.

Also, though 4-liter likes to flex its muscle, in doing so it develops quite a thirst. The 14-mile-per-gallon city/23 m.p.g. highway rating means the only thing that can hold back a 540i is the sight of a gas station-any gas station.

Add $1,300 in gas-guzzler tithing and another $1,350 for the traction assist, a pricey system that will pay for itself the first time it saves you a trip to the body shop.

Then add the 10 percent luxury tax (for any transaction that exceeds $32,000). A trade-in, of course, will lessen the luxury tax burden. Of course, when you are in the $48,600 region, who quibbles about a luxury tax or the price of pork bellies or membership in the Chicago Bar Association?

Add another $370 for heated seats and $470 for freight and you’re on your way. To save a few pennies, you can opt for the 540i with 5-speed automatic rather than the 6-speed manual, because the car with automatic starts at $47,950, or $650 less. By going with automatic plus dropping the heated seats, you can save $1,000 to help offset the guzzler tax.

One word of warning about the 540i: BMW says its owners need to devote their total time and energy to driving, not sipping their favorite beverage, so this $48,600 machine comes without a cupholder.

Gucci and Pucci are welcome, but not the Hills Bros.

1995 BMW 540i
Wheelbase: 108.7 inches
Length: 185.8 inches
Engine: 4-liter, 32-valve, 282-h.p., V-8
Transmission: 6-speed manual
EPA mileage: 14 m.p.g. city/23 m.p.g. highway
Pluses: Dual air bags and ABS standard, traction control available as an option. The 4-liter is super quick, yet quiet. The 6-speed is very smooth. The suspension is a dream.
Minuses: You may never pass a gas station that the 4-liter doesn’t like. The seats are a bit stiff. The front seat headrests are too large and obstruct side and rear vision. The rear seat isn’t all that roomy. Because there are no autobahns in Illinois, how about just one cupholder, please?

This car was great for driving short and long distances. It's got a powerful engine with 8 cylinders and has plenty of room for people in the back seat. It just goes and goes.

March 29, 2017
By Valeriu Grebencea from WILLOWBROOK, IL
Owns this car

February 16, 2011
By 6thGear from Pendleton, Oregon
Owns this car

I recently bought this car, and I have never felt so exhilarated while driving. The car's 6-speed cuts through gears like butter, and it is hard to not stomp on the gas pedal at every light. It will give you whiplash. The only thing stopping me from doing that is gas, which if you drive the car correctly, it is capable of 28-29 on the highway, and 20 in town with a Dinan chip and 92 octane. Very low RPMS = a very affordable 8-cylinder. The interior is very comfy up front, but the back seat is kind of small. The lack of a stock cup holder seems ludicrous to me. The stock sound system is mind-blowing for a 16 year old car. It has all the se.x-appeal that goes with the BMW name if not more. I couldn't ask for anything more in a car at 20 years old. 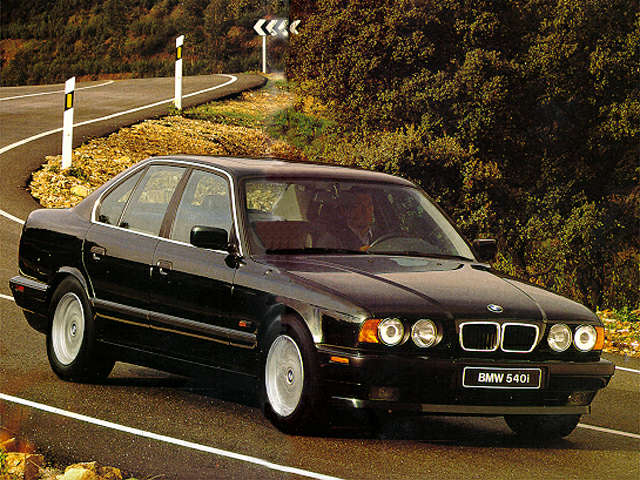