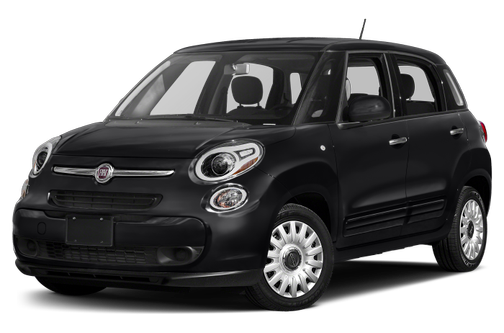 New for 2014, the Fiat 500L has its drawbacks but this new, larger Fiat’s drivability, utility and value give shoppers a respectable new option among the slew of popular four-door hatchbacks out there.

That’s something the Italian brand couldn’t deliver in the 2-year-old 500, whose styling appeal couldn’t hide some drawbacks. The 500L is harder on the eyes, but it should align better with American tastes.

The Fiat 500L comes in Pop, Easy, Trekking and Lounge models, with prices ranging from less than $20,000 to around $28,000, including destination charges. Click here to compare them, or here to compare the 500L with the 500. Like the 500, the 500L comes only with front-wheel drive with automatic or manual transmissions. At a Baltimore media preview, I drove both gearboxes in all trims but the Trekking — an outdoorsy poseur whose butch styling renders no additional ground clearance or all-wheel-drive capability. Back at Cars.com’s Chicago offices, other editors also drove a stick-shift 500L Easy.

Not Just a Larger 500
It took BMW’s Mini nine years to birth a larger sibling to the Cooper hatchback in the Countryman, part of a rapid multiplication that dealt us two- and four-seat convertibles, a coupe, a panel wagon, two more hatchbacks, an electric-car test program and the Countryman. Chrysler-Fiat is on its way there. The 2014 Fiat 500L is a larger, four-door version of the original 500 — which, in just its second model year since the company’s U.S. return, has already spawned a convertible 500C, an all-electric 500E and now the four-door 500L.

Unlike the Minis, which share the same interior styling and driving experience (more or less), the 500L is significantly different from its little two-door sibling. For starters, Fiat says the L rides the automaker’s global “small wide” architecture, an all-new platform whose wheelbase is a foot longer than the 500’s. The 500L is more than 2 feet longer than the regular 500, and it’s nearly 6 inches wider and taller, too. The interior bears little resemblance to the 500. A Fiat official said the only thing the 500 and 500L share “is the number 500.”

Perhaps it should have shared more, at least in terms of styling. The 500L has too much going on up front and too little in back. Fiat says it drew design inspiration for the 500L from a number of cars, including the 1998 Multipla — an eyesore of Pontiac Aztekian proportions. Americans should consider themselves lucky that car never made it stateside. The 500L stops short of such ghastliness, but it’s still as awkward as a kid at his first school dance.

Composed, if Heavy
As an on-road hatchback, the Fiat 500L excels. Fiat’s turbocharged 1.4-liter four-cylinder makes 160 horsepower and a respectable 184 pounds-feet of torque. Like in the Dodge Dart and Fiat 500 Abarth that share the engine, the turbo power comes in peaky, high-rev bursts, but I found enough oomph to muscle past slower highway traffic even with three adults aboard and the air conditioning blasting to keep up with an 80-degree day.

The 500L gets the same dual-clutch, six-speed automatic that’s optional on the Dart sedan from Chrysler’s Dodge subsidiary, but it behaves far better here than in the Darts we’ve driven. Upshifts are smooth and swift; after a moment of kickdown lag, the gearbox downshifts multiple gears with no stair-stepping in between. It runs a pricey $1,350 more than the six-speed manual in Easy and Trekking models; the base-model Pop is stick-shift only, while the range-topping Lounge gets the automatic standard. Editors agreed: The stick shift’s long throws and tall gears make for little fun. Get the auto.

Both transmissions deliver modest gas mileage. Fiat expects EPA estimates of 25/33/28 mpg city/highway/combined for the manual and 24/33/27 mpg for the automatic — figures that roughly match the Countryman but fall 2 to 4 mpg below an automatic-equipped Elantra GT, Focus or Subaru Impreza hatchback. What’s more, Fiat recommends premium gas; aside from Mini, the others run fine on regular.

Part of the blame goes to curb weight. At 3,254 pounds, an automatic Fiat 500L weighs some 800 pounds more than the 500. Heck, it’s 157 pounds heavier than a Cooper S Countryman — and 306 and 470 pounds heavier, respectively, than a Ford Focus hatchback and Hyundai Elantra GT.

The Fiat’s modest body roll and vague steering give a clear handling edge to the Countryman. One editor thought the Fiat steered better; others deemed the Fiat’s handling too clumsy in the corners. The car redeems itself on broken pavement, where the Countryman gets skittish over ruts and manhole covers despite having an independent rear suspension that, on paper, is more advanced than the 500L’s torsion beam. The 500L stays put, and it does everything a degree quieter than the noisy Mini.

The same goes for the highway, where the 500L’s lengthy wheelbase eliminates the 500’s up-and-down bobbing sensation. Fiat gave the 500L the upgraded Koni shocks from the 500 Abarth, and in aspects ranging from damping to isolation, the 500L rides damn well for a smallish hatchback. It rides on par with the Focus and better than the firm Countryman (or the outgoing Mazda3, for that matter). Good steering feel on the highway adds to its composure. There, the 500L settles in for comfortable, low-assist stability that’s easy to manage.

The Inside
Cabin versatility adds to the appeal, with a one-step-tumbling second row that opens the back up to around 65 cubic feet of maximum cargo volume — at least 12 cubic feet beyond most competitors. Fiat’s so-called “glass A-pillars” are, in fact, narrow split pillars with glass in between. To Fiat’s credit, forward visibility is very good, and with the optional panoramic moonroof, the 500L should be a claustrophobe’s happy place.

Editors agreed the Fiat 500L’s high ride height makes the seats easy to slip into, but beyond that, the chairs drew as much consensus as, oh, a bill in Congress. We’ve complained about the overstuffed chairs in the 500, and some may find these even worse. Up front, the bottom cushions are too short and the backrests offer all the lateral support of a church pew; one editor added that the cushioning all around was just too firm. Other editors, by contrast, found the front seats acceptable — comfortable, even. Decide for yourself.

The rear seats had more agreement. (I can make no comparison to anything that happens in Congress these days.) Relative to other hatchbacks, they offer a high seating position and good legroom, with a minimal floor hump. They also adjust forward and backward and recline — a rare provision in this class, though the Countryman also provides it. Editors gave thumbs up: The 500L has a well-executed backseat.

Safety, Features & Pricing
The Fiat 500L has yet to be crash-tested. Standard features include seven airbags, all-disc antilock brakes and the required electronic stability system. Click here for a full list of safety features.

The Fiat 500L Pop starts around $20,000, and it’s well-equipped at that price. Standard features include power locks with remote entry, one-touch windows all around, manual height-adjustable seats for the driver and front passenger, cruise control, a 5-inch touch-screen stereo with USB/iPod compatibility, steering-wheel audio controls, and Bluetooth phone and audio streaming.

For around $21,000, the Fiat 500L Easy adds upgraded seat fabric and padded dashboard trim (versus an exterior-color-matched hard shell in the 500L Pop). It also gets 16-inch alloy wheels, an upgraded stereo, a leather-wrapped steering wheel, and a front center armrest with covered storage underneath. For 2014, a 6.5-inch touch-screen with navigation, rear parking sensors and a backup camera are also included — formerly a $1,745 Premier Package, Fiat says. That makes the 500L Easy, well, an easy choice over the Pop.

Move up to a Trekking (around $22,000) or Lounge (around $25,000), and you can get  17-inch alloy wheels, dual-zone automatic climate control and heated leather upholstery with power lumbar support for both front seats; some of those options are available on the Easy. The 500L’s dual-clutch automatic transmission is unavailable on the Pop and optional on the Easy and Trekking. It’s standard on the Lounge. If the dual-clutch auto shifts too abruptly for you, Fiat says a conventional torque-converter automatic will come later.

A panoramic moonroof and Beats premium audio are optional on all but the 500L Pop, and many Lounge features are available in option packages on the Easy and Trekking. Skip the Beats; several editors slammed murky bass and dimensionless sound.

500L in the Market
Fiat says all-wheel drive is “technically possible” for the 500L, but the automaker reckoned demand would be too scant, so front-wheel is the only choice for now. We’ll see. Forty percent of the Mini Countryman new-car inventory on Cars.com has all-wheel drive, which suggests strong demand in the 500L’s presumptive top competitor.

After a slow start, the Fiat 500 has outsold the Cooper (excluding the Countryman) through May. (Despite all the variants, Mini’s combined sales amount to a Ford Fiesta’s.) We’ll see if Fiat’s additions help. The 500L augments the 500’s city-friendly attributes — its turning circle is still a tiny 32.3 feet, for instance — with much-needed refinement and utility. Is this the Italian compact that Americans want? I suspect so.

Agile As A Deer

I love my car. It, a 2014 500L Easy, was purchased in ‘16. I bought breaks, rotors and discs for all tires at $1000 and best Michelin’s for $1000. Finally replaced break and running lights for LEDs since, I think, they were being used as breakers for electrical surges. Just changed the spark plugs. I love the way it handles except I can’t power through. I want to tune it, but I fear transmission and break issues, and I have heard of the second cylinder going out. Generally, I absolutely love this car. I can rip through traffic, especially in sport mode. It is as agile as a deer.

Its a great family car with a lot of Italian flair

April 26, 2021
By Portuguese Luigi from Porto, Portugal
Owns this car

If you need storage galore this fiat gives you a lot of space of shopping, travel and passengers comfortably stretching out their legs and arms. 360 degrees of windows. No blind spots. Looks a lot smaller than it actually is. It's a massive MPV. I have the treeking edition. Green with with roof and mirrors that looks very cool with the cross country looks. 2 driving steering wheel modes, treeking mode for off road trips, the seats adjust to your back at your own will. Lots of info entertainment. Better then the mini countryman for the value. Does not have a good motor in comparison but it's not built for speed its made for comfort. Second hand is very cheap. I recommend this car for young family's or numerous family's. Fiat 500 X looks better buts it's much smaller than the L and expensive... your choice

I fell head it heels for the Bashmint blue. It is a soft costal color that always makes my heart smile. I bought this car when I had to have neck surgery and I needed a comfortable suspension. This car can travel Michigan crappy roads and not bother a C5-C6 neck surgery or a L5-S1 spinal surgery. It still is the most comfortable car I have ever driven or ridden in. I don't want to sell it but now that I am assisting my aging parents, have my own family and have 2 XL dogs. It was time to aquire a FLEX. The cargo space will fit golf clubs, or tons of shopping. The hatchback design has the ability to be 1 XL space or you can have "shelves" to allow more organized space. Great gas mileage. A perfect peppy car.

Rating breakdown (out of 5):
3 people out of 3 found this review helpful. Did you?
Show full review
See all 103 consumer reviews

All model years for the FIAT 500L 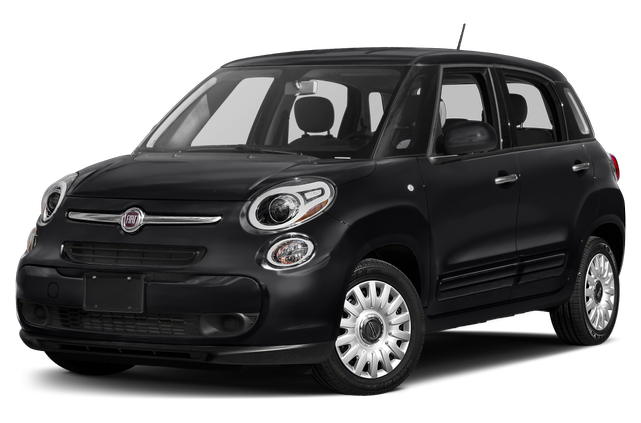 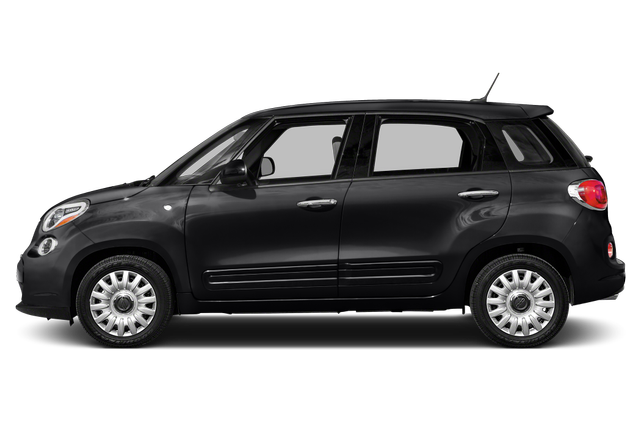 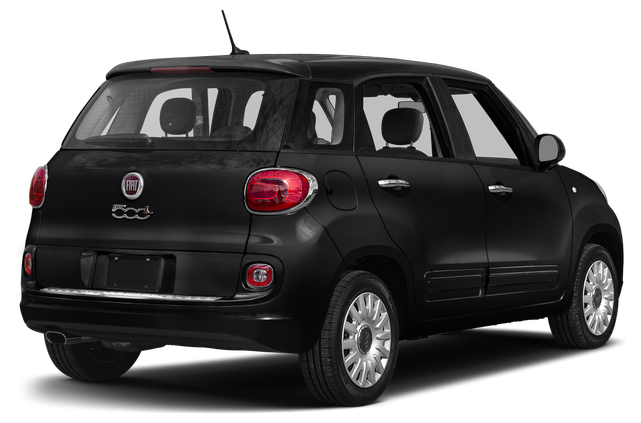 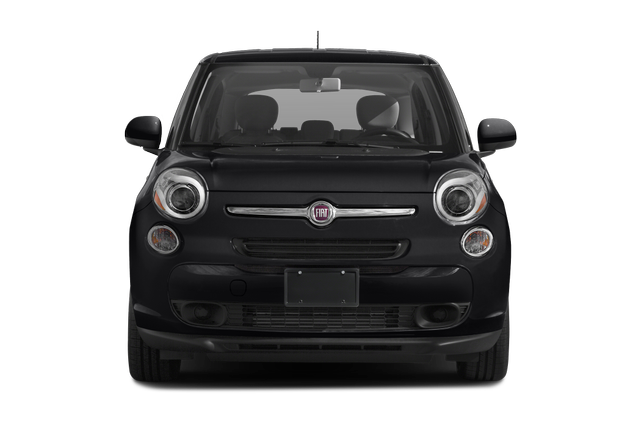 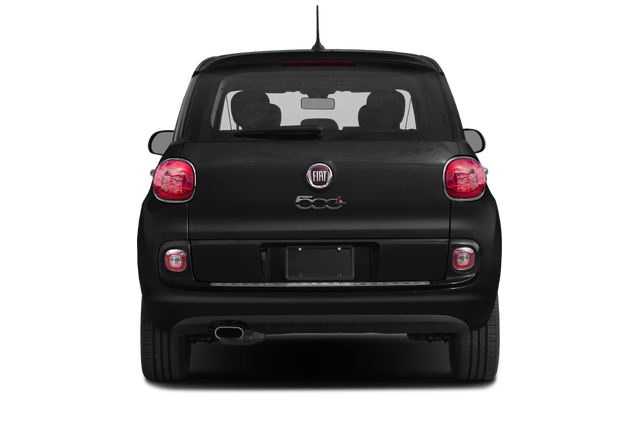 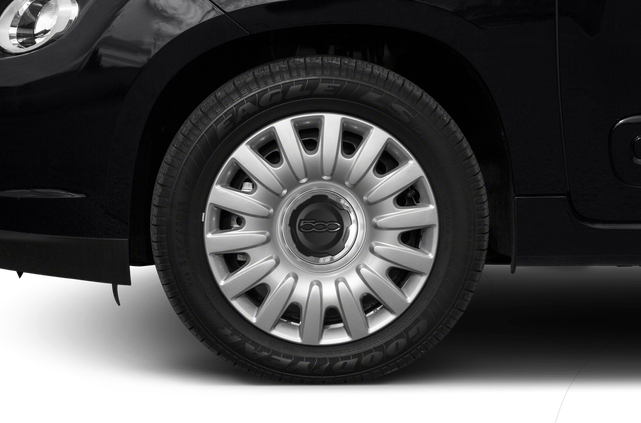 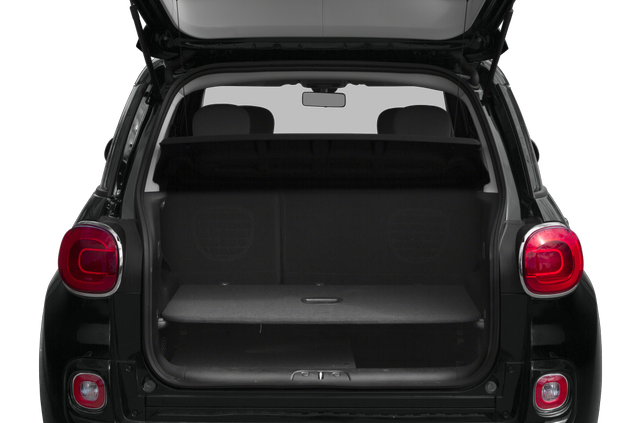 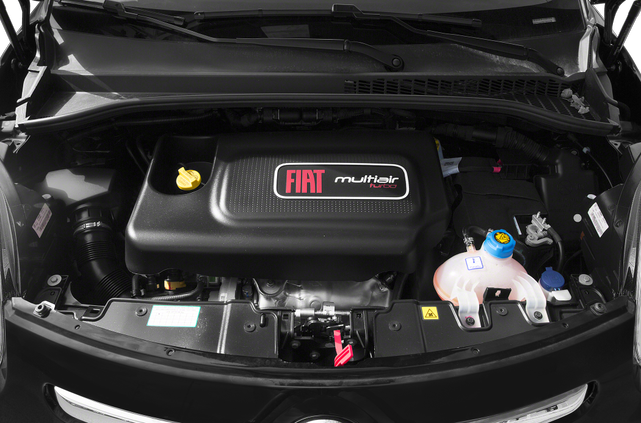 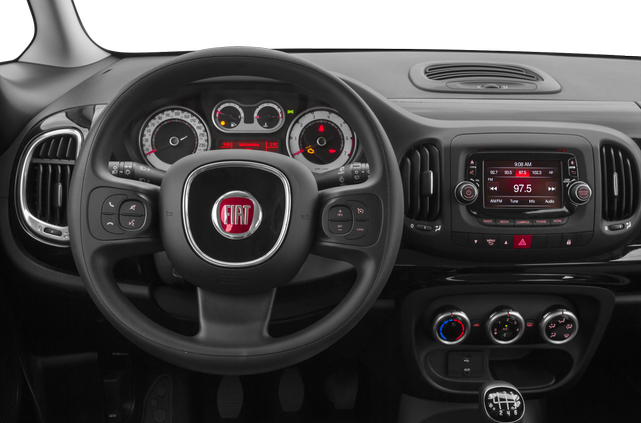 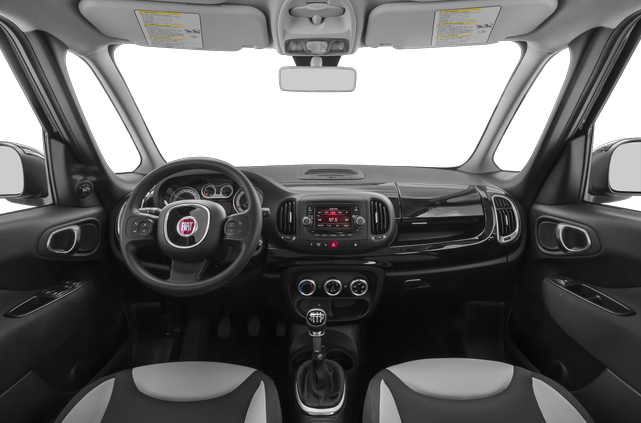 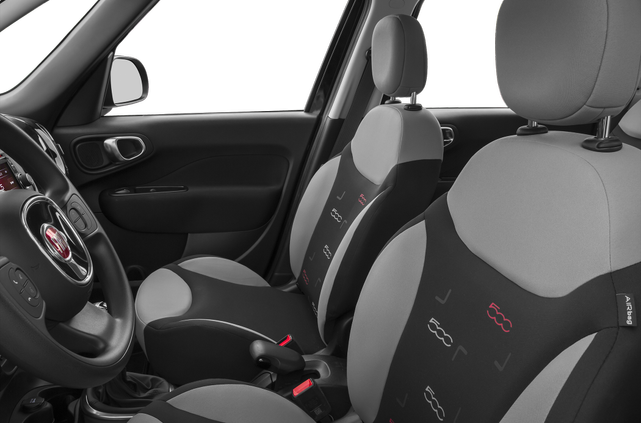 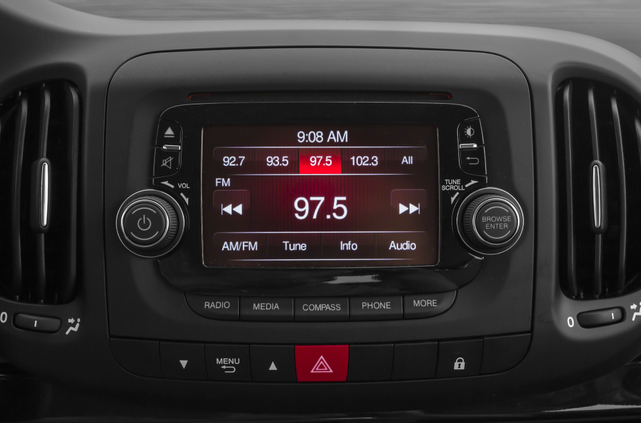 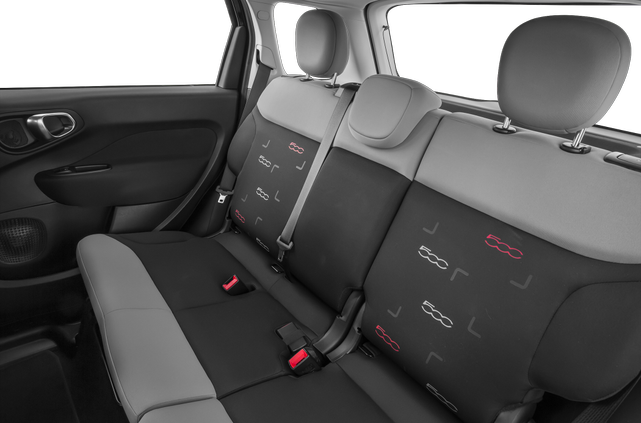 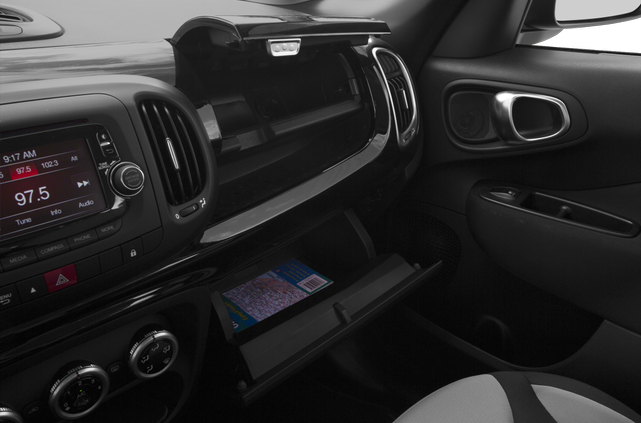 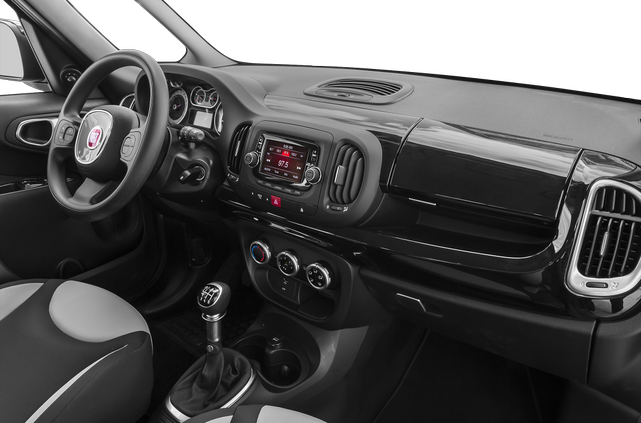 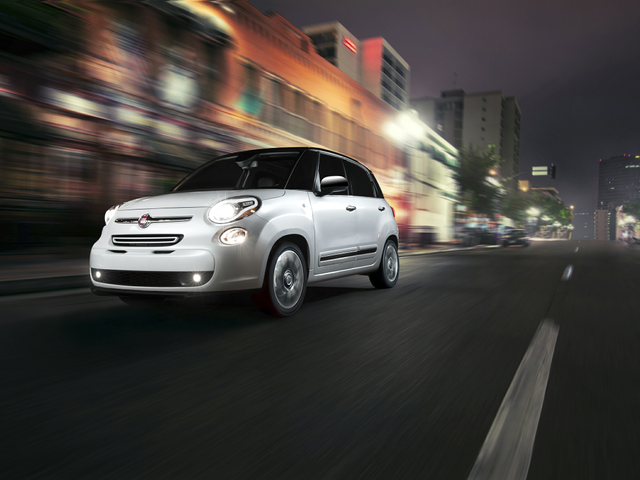 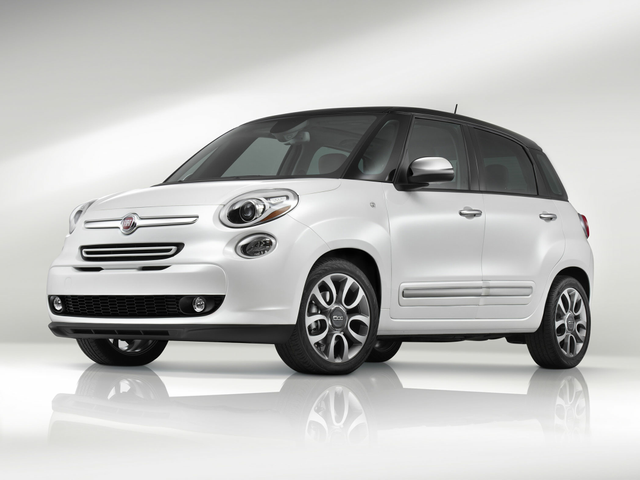 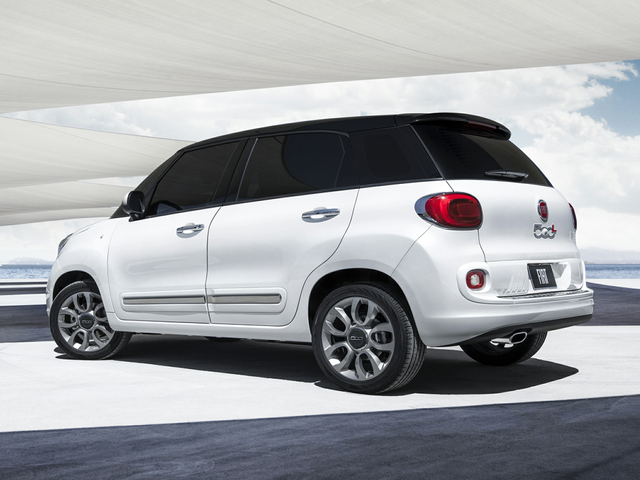 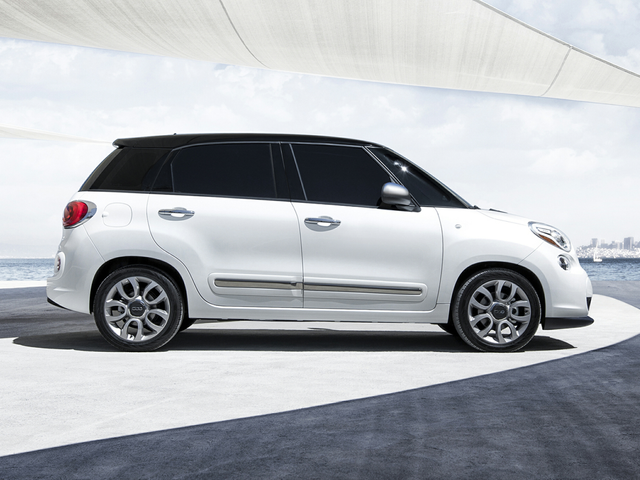 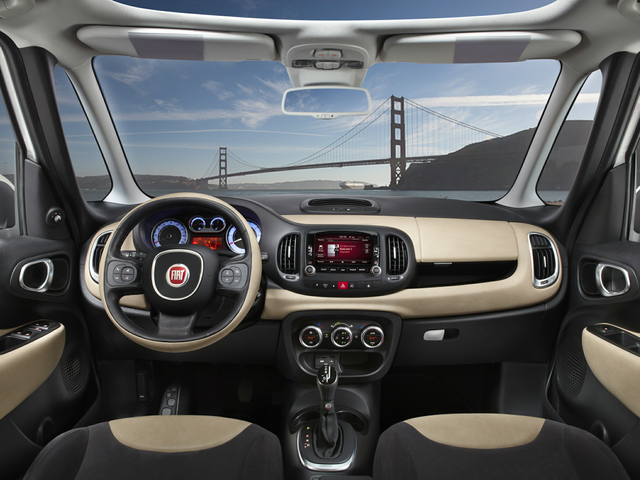 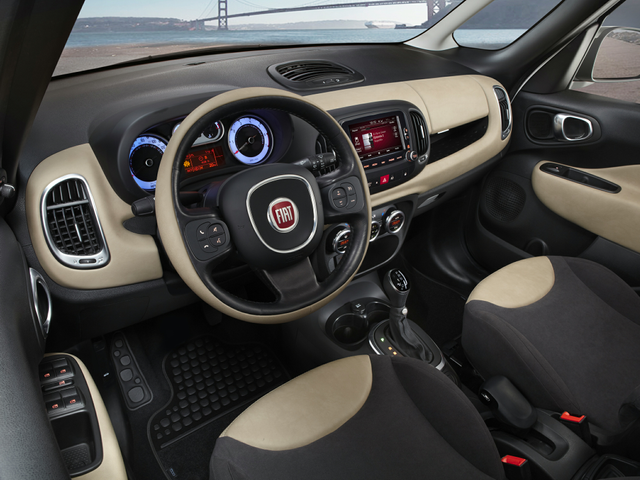 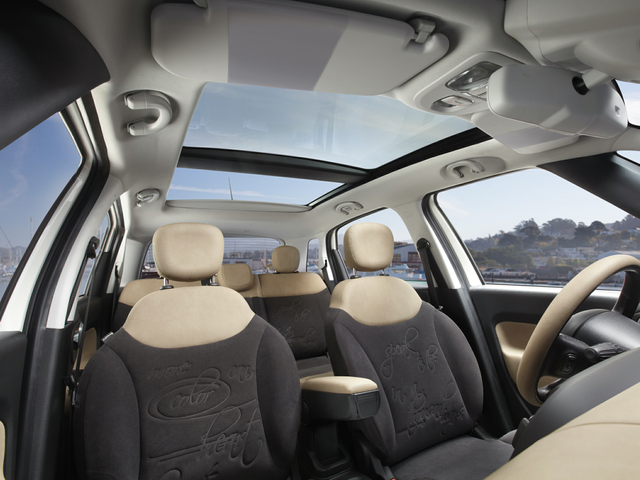