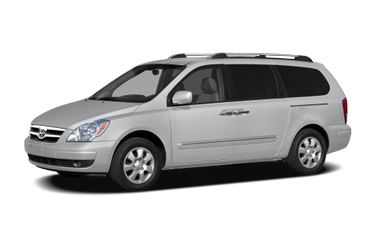 We drove the 2007 Entourage around town for 4 days while our 2005 Sienna was in the shop for body work. Although not apples to apples, I think the comparison is useful, since our 2005 Sienna shares most features of the 2007 Sienna, except for the engine (266 hp for 2007 vs 215 hp for 2005). Hyundai engineers must have spent 6 months studying a room full of Siennas. There was striking duplication of features all the way down to the door handles. The Hyundai (242 hp) felt light, nimble, and powerful despite being 280 lbs heavier than the 2005 Sienna (but not an advantage over the 2007 Sienna, as noted above). Hyundai acceleration was bit too sensitive for me (tended to jump forward with a slight push of the accelerator). Our Sienna, while amply powered, requires a stomp on the accelerator to move. Hyundai downshifting was more responsive than the Sienna, which has a disconcerting delay of seconds shifting. Hyundai appeared to have more legroom space in the mid seating area, although perhaps related to differences in cars (our Sienna is an 8-seater, Hyundai has 7 seats). It was easier to get kids in out and around 2nd row baby seats in the Hyundai. Both cars were quiet. It was easier to hear other cars outside the Hyundai (maybe related to less wind noise). The Hyundai seemed to rattle a bit, but to be fair, our Sienna had a highly annoying left sliding door rattle (fixed under warranty) Hyundai controls looked cheaper compared to the Sienna, and may not hold up. Speedometer was not prominent or as easy to read. In fairness, the Sienna has cheap plastic snap-together molding around the base and hinge areas of the seats that frequently comes apart or bends/breaks. The Hyundai headlights were brighter and vertically focused while giving great lateral illumination compared to the Sienna. Steering was tighter on the Hyundai, whereas Sienna steering feels over-assisted with just enough play to be annoying. The Sienna has stereo controls on the steering wheel; Hyundai does not. Hyundai deserves a pat on the back for developing a great car. However, the Sienna is still clearly the better deal based on proven reliability and resale value. When sales/rebates are considered, I doubt the Hyundai will cost much less. Don?t buy the Entourage unless you can get it for thousands less. If you do, don?t plan on selling it for a very long time.

November 7, 2006
By Steve from Montreal, Quebec
Owns this car

I purchased my 2007 Entourage in June 06 after a run in with an 18 wheeler which totalled my Accord. Our choices were narrowed down to the Odyssey, Sienna and Entourage...the Entourage won out based on comfort and the extra features (being 6'5"..this van is comfortable). I loved this van for the first few weeks, great ride, good power, extremely comfortable and BIG... After 2 months and approx. 7000 miles, the welds over both sliding doors began to show through the paint...still waiting on the dealer to propose a solution. Next, each fall I always give my cars a complete detailing including under the hood, under the front edge of the hood the paint is so thin you can actually see the primer and pinpoints of bare metal....still waiting on the dealer! We are into November and now I must deal with the rear hatch squeaking on every bump and curve, very annoying...dealers response...it's normal. For the price I paid for this vehicle, I would expect something better built and better service....If you are in the market for a minivan, spend the extra couple of grand and get the Toyota or Honda...you'll get your money back on the resale not to metion on the fuel economy, this thing sucks gas!

October 24, 2006
By Stush from STEELER COUNTRY
Owns this car

I feel that this vechicle is a great value for the money. Standard traction and stability control. Airbags every where. A warranty that is unmatched. Bought the SE with the premium package. It has a rear warning alarm when you get to close to something when backing up, too cool. Power windows in the sliding door, it's about time. 245 horses, this thing is quick for a mini-van. The gas mileage is close to what they are rating it at , but , I feel they could do much better. I feel that it drives and handles great, remember, this is a mini-van. As for realibility, time will tell. I also own a 02 Santa FE, 50,000 miles and only had to replace a power window motor, no charge, under warranty. So go for a test drive, YOU WILL BE IMPRESSED.

Comparable to other minivans!

Great value. We compared to the Honda Odyssey and found that the features were almost EXACTLY alike. The only advantages that the Odyssey had over the Entourage was and extra "removable" seat that can be placed in the 2nd row for a total of 8 passenger seating and an extra storage space between the front and 2nd rows. The Entourage was a much better value for the money. The only downfall is that the Entourage has not been out in the U.S. long enough to really compare as far as reliability or repair history. We had a Sante Fe and LOVED the vehicle and the service department was ALWAYS very helpful and polite. We highly recommend this vehicle.

Most comfortable car that I've owned.

Great comfort in the ride. I really love the front dual A/C, now I can keep cool while my wife has her own setting. I have the Limited with all options. We had problems with the transmission (1,700 miles) which had to be replaced. I wish that Hyundai would consider providing a loaner while the vehicle is being repaired under warranty. I'm a little disappointed in the gas mileage and the acceleration. With a rocky start, I still believe that it will be the best vehicle that I have owned.

I love my new van...power is awsome, great get up and go. I like the power windows on the sliding doors, and the dual climate control air conditioning. I also like the captains chair for the driver, passenger as well as the second row of seats. Great sounding stereo and stylish exterior. Not bad for a car company that hasen't been around as long as the others.

Watch out Honda/Toyota, you may not like this one!

Pros: (1) Standard air curtain through the third-row, (2) Traction Control System, (3) Electronic Stability Control, (4) ABS, (5) cleanly laid out dash with separate controls for heat/air in the front and the rear, (6) Tire Pressure Monitoring System (7) seats very comfortable, third row folds down into the floor and has a 60/40 split. (8) The hood has hydraulic hinges and is easy to open. (9) Gas cap holder is convenient while filling gas. (10) There is ample storage in the dash beyond the glove box, which has shelves! (11) Electrical outlets in the front seat and the boot. (12) Visibility in the front, back and to the left is good. (13) Great warranty. Cons: (1) Cigarette lighter and ashtray is useless and takes up premium space on the dash. Hyundai must re-think this. One solution to this design flaw my wife came up with is this: She has thrown away the lighter and has her cell-phone charger permanently plugged in its place. The ashtray has been removed and she put a small piece of foam at the bottom and the tray is her cell phone holder. (2) Another design flaw is that there are 12 cup holders for the four bucket seats. Perhaps a tail gaters dream vehicle but Hyundai needs to know that an average person is not dehydrating at the rate of needing three drinks while in a car. One solution to this flaw, if you have kids, could be to cut a plastic bottle to size and slip them into the cup holder and use it as a pen/pencil holder and the kids will permanently have access to them while in the car. This leaves enough room for a writing/drawing pad. (3) Hyundai should get rid of the manual shift. With the TCS and ABS hardly any one needs to shift down. Summary: If you are thrifty, have children, and would like a van, your prayers have been answered.

Rating breakdown (out of 5):
0 people out of 0 found this review helpful. Did you?
Show full review
1.6

i had this vehicle as a rental while my sienna was in the shop for some body work,recently was in an accident...! and the entourage had lacked many features my sienna limited had...i had the entourage limited with all packages and man it was still lacking..did u know that the kia sedona and the entourage dont even offer a navigation system...and for 34,000$ it should...my sienna was a little more but way worth it...it holds its value way more than this van. i had it for a week and i absolutely hated it...the power doors were slower than the siennas,the shifter would keep shifting to the manual mode...and the car just felt top heavy and under powered,i was actually scared merging onto a freeway..! anyways i got my sienna back and love it..!

May 23, 2006
By auto sales consultant from new jersey
Owns this car

ecellent mini van. I owned a Sienna and traded it in for a Hyundai. It had more features and cost less.