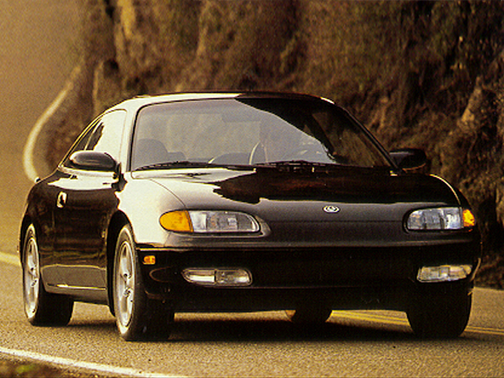 Our 1993 Mazda MX-6 trim comparison will help you decide.

Mazda has done an excellent job of keeping the MX-6 under wraps, though keeping a car secret isn’t the best way to boost sales.

The Mazda sports coupe is in Flat Rock, Mich., along with the Ford Probe. While Probe gets all the fanfare, the MX-6 is the better of the two cars.

We tested the LS with 5-speed by taking it to our little handling course hideaway, a section of desolate city streets tucked away from the normal flow of traffic. It features a variety of bends and twists and obstructions to maneuver around along with a few short straightaways to check out acceleration and braking.

The MX-6 hugged the road and sat flat regardless of the abuse tossed its way. The 5-speed was smooth, a short-throw unit to get you into and out of each gear quickly. The power steering provided immediate response to wheel commands. Point in any direction and that’s where you head without lag time.

Engine and suspension, steering and braking were in harmony.

The only sour note is the fact that anti-lock brakes are an $800 option. At least a driver-side air bag is standard, but in today’s market the car begs for a passenger-side bag as well.

One clever feature that might be overlooked is the vent system. You can adjust a lever so fresh air is directed through the ducts toward your face while hot air is directed toward your legs and feet. It means you don’t feel par-boiled all over when you want just a touch of heat to bring the feet back to life.

One gripe was the power sunroof, which tended to rattle over bumps. To the person who just shelled out more than $22,000, the sound of a rattling sunroof is akin to the sound of fingernails scraped over a chalkboard.

First review: 05/10/92
Mazda has put cars on a philosophical plateau.

The Japanese automaker boasts that it builds vehicles that are “emotionally charged with unique personalities, cars some people love, not cars that many people like, cars that won`t please all the people all the time.“

You tossed and turned and lost sleep debating whether you wanted red or blue pinstripes on your new car, and now Mazda`s got you thinking metaphysically about the karma between you and your coupe.

We test drove the Mazda MX-6 and found it a fun machine. Our emotional charge for the car was stronger than like, but didn`t quite reach rapture. Viper is love. MX-6 is fondess.

The MX-6 coupe and 626 sedan are the newest entries from Mazda built at its Flat Rock, Mic h., assembly plant alongside the Probe coupe produced for its partner Ford. All three are 1993 models featuring new styling and engineering updates. The MX-6 and 626 are arriving in showrooms now, Probe is coming July 9.

The MX-6 is another distinct styling relative of the Miata roadster; the sheet metal is rounded and the machine sits close to the ground.

The look is appealing, much more so than the MX-6 coupe of old that was too conservative and didn`t deserve the adjective “sport.“ The `93 model is a true sports coupe that looks and acts very lively.

The 5-speed is about as smooth as the one offered in the Saturn coupe, meaning you move through the gears effortlessly. It just might give you that emotional charge that Mazda brags about. If you`ve soured on 5-speeds after an experience with General Motors, you`ll come back into the fold once you wrap your hand around the Mazda manual. Clutch movement is equally as smooth. A very good combination.

The V-6 is a little dynamo. You`ll reach 60 miles per hour quickly-and so quietly that it`s a surprise when you look at the speedometer and realize you`ve reached the radar detector zone.

The MX-6 sports new dimensions for 1993. Wheelbase is 102.8 inches versus 99 inches on the model it replaces, and overall length has been stretched to 181.5 inches from 177. The new MX-6 also is 2.4 inches wider and 2 inches lower. Maybe it`s just our eyes, maybe it`s the round folds of the rear fenders and the fact the car sits low, but the `93 MX-6 looks smaller than the car it replaces. Go figure.

With the longer wheelbase you`d expect a smoother ride, and the MX-6 holds true to that formula.

With the added length, you`d expect greater interior room and cargo capacity in the trunk. Driver and front-seat passenger enjoy spacious room and comfortable bucket seating, and the trunk is huge even if not very deep. Rear seats fold flat so you can slip skis through the trunk and not need an outside carrier.

Rear-seat occupants, however, will argue that the larger dimensions haven`t relieved the cramped quarters in back. Getting into and out of the back seat of the MX-6 should be an Olympic sport. Instead of gold, silver or bronze medals, the first three finishers would get free reconstructive surgery.

Ironically, the MX-6 provides an ashtray for rear-seat occupants, but no one old enough to smoke can get in back to use it.

A few other modifications contribute to the above-average ride and handling. The engine was moved further rearward for better weight distribution, and anti-roll bars were enlarged to improve handling. And a supercomputer was called upon to increase lateral stiffness of the body for a quieter ride with less vibration and minimal road harshness.

Also contributing to the performance are speed-sensitive power steering, large 15-inch radial tires and four-wheel disc brakes with optional anti-lock. The base MX-6 starts at $15,550. The LS version we drove starts at $17,825.

It also features the best and the worst in cupholders. One holder is in the center armrest, but is so far behind the driver or passenger it`s almost unusable. The other is an award winner. It pulls from the dash to the left of the steering wheel just below the air duct. In the winter you can keep your coffee warm, in the summer you can keep your pop cool.

The MX-6 will compete against such vehicles as the Honda Prelude, Nissan 240SX, Toyota Celica, Mitsubishi Eclipse and Ford Probe.

Mazda said the sportier MX-6 styling and increased performance from the V-6 engine bring in more male buyers. Currently 65 percent of MX-6 buyers are women, but Mazda expects 54 percent of its buyers will be men for 1993.

The MX-6 coupe would be an eye popper in convertible form, but Mazda said there are no plans to offer it in any version other than hardtop coupe.

More than 75 percent of the Michigan-built MX-6`s content is U.S.-sourced, which according to the government formula makes it a domestic car. Japanese cars with less than 75 percent content still are considered imports even if they are assembled in the U.S.

Clark Vitulli, chief executive of Mazda Motors of America Inc., defended the MX-6 by saying it may be a product of a Japanese manufacturer, but because it is built in the U.S., the wages of the 3,000 workers at Flat Rock “are spent in U.S grocery stores and dry cleaners.“

He didn`t say whether those wages were high enough to erase the $40 billion trade imbalance between the U.S. and Japan. But if you`ve been to the grocery store lately, you have to suspect the Mazda line workers are making a healthy contribution toward the $40 billion.

Great looks and handling but not the most reliable

September 23, 2020
By SteveC from Vancouver, BC
Used to own this car

Perhaps the one I bought used was a bit of a lemon but it ended up costing a lot of money in repairs. Every time it went into the shop, which seemed too often, it was about $1,000. The other thing I would fault was that the revs seemed too high at highway speeds for a 2.5 V6 manual. I figured the very good acceleration for a 165 hp engine was due to a lower final drive gearing; however, this resulted in higher revs than expected (over 3,000) at highway speeds giving only about 30 mpg. By comparison, an 83 Camry I had used to cruise at 2,500 revs and deliver around 40 mpg. On the positive side I loved the styling and handling which for a front wheel drive car was extremely good, with very flat cornering and almost neutral handling. I would buy another one just to see if I'd had a somewhat 'iffy' example the first time around because, despite the negatives, it was a blast to drive; however, they stopped making them over 20 years ago at the time of writing so any current examples will have a lot of kms and wear on them.

Most agile car I have driven.

November 8, 2015
By JIM from Adelaide South Australia
Owns this car

Almost a classic 22 years old now. She is still a fun car to drive anywhere. I'm sure the cruise control has saved me money on speeding fines too.

I purchased this car used, and have put over 70,000 miles since then. It has a 5-spd with the 2.4L V6, ABS, sunroof and leather interior. Very fun to drive, even after having it for several years. This car handles extremely well, with newer tires. I've kept the maintenance up, replacing the water pump, timing belt, but the engine is very reliable. New brakes and calipers installed at about 110K miles. I had a broken spring in the RF suspension, so I had a complete new spring/shock set installed. This lowered the car about two (2) inches. With over 130,000 total miles the car needs new paint. But I'm impressed how much fun it is to drive.

All model years for the Mazda MX-6 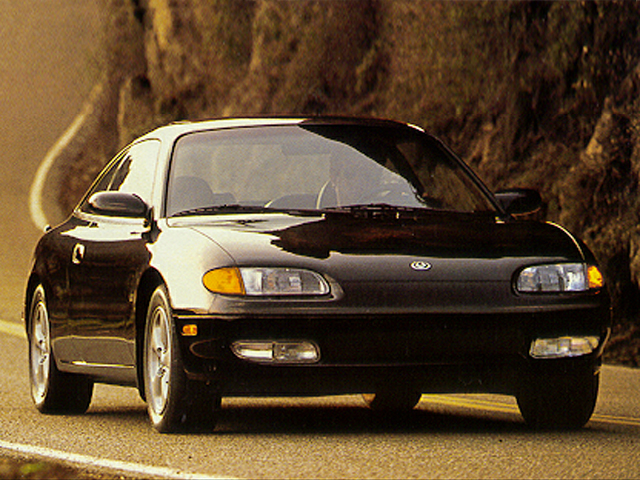