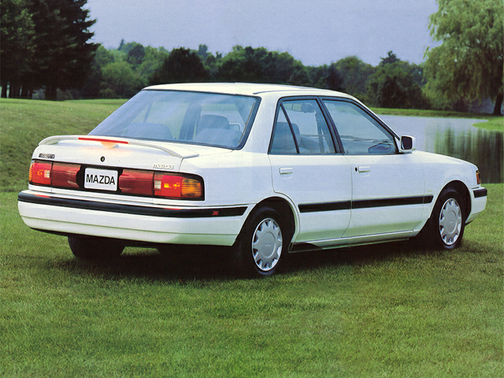 Our 1994 Mazda Protege trim comparison will help you decide.

There aren’t many duds in the litter. Kia’s Sephia–with mechanical seat belts and the look of a 1988 rerun–might be a questionable place to spend hard-earned money. So would the door mouse-powered Hyundai Excel–recently, and thankfully, replaced by the Accent. (The Excel, you may recall, hit 115 m.p.h. only when Rodney King was at the wheel–or so said the CHP.)

Mazda’s Protege, thanks to a combination of refined engineering, quality equipment and superb balance when country roads become gymnastic, falls far from this latter lot.

Despite subcompact sizing, Protege’s interior offers more shoving and snuggling room than even mid-size cars from BMW and Mercedes. Credit here goes to something called OptiSpace Design. Mazda likes to rattle on about interior packaging and functionality of space, but it all boils down to rethinking every aspect of design–from engine compartment to body styling–to optimize the process of scooping out a cabin.

Example: Inside panels on doors are usually flat with cranks, buttons and elbow rests poking into the interior of the car. Protege panels are concave, which buries all those handles and adds width to the passenger compartment. Eureka! OptiSpace Design.

The base engine has been puffed up from 82 to 92 horsepower from a new 1.5-liter, 16-valve four banger. It will be standard equipment on the Protege DX primer and the somewhat ritzier LX model.

As part of Mazda’s general downsizing and re-arranging to staunch finances that have become a blood bath, there will be only one optional engine in the lineup. Fortunately for those who like a little peppermint in their motoring, that means a Protege ES equipped with Mazda Miata’s 1.8-liter engine. This proven four from a highly successful two-seater produces 122 horsepower and more adolescent fun than might be healthy for sober adults.

The Protege’s body has been stiffened considerably by supercomputer analysis and reinforced cross members for the suspension–all of which removes much of the roll from hard cornering and most of the pitch from serious braking. This new muscle tone also produces a small car devoid of skittishness, in fact a subcompact of exquisite manners and a high measure of balance and security. Even among drivers prone to pretty impolite dancing.

Prices, unfortunately, are up. Way up.

Here’s the really sad comparison: For $1,000 more you could drive home in a small stick of dynamite known as the Ford Mustang GT with a 5.0 liter V-8.

The oddity here is that Millenia styling works for Millenia. But then Millenia is a larger, rather dramatic vehicle. When its lines are adapted for a sedan of reduced dimensions, most of the styling subtleties get lost in the transmogrifier.

So, with name and logos taped over, one could examine Protege, walk around it, sit in it, poke it, sneak up on it when it’s sleeping–and there would be no clues to its maker. Mazda? Nissan? Honda? Montgomery Ward?

The interior is much more enjoyable. All dials are clearly visible from a dashboard also concave to enhance the illusion and actuality of roomier insides. Cruise control, turn signals, gearshift and windshield wiper stalk fall easily to hand.

But the radio controls need relocating. They are low on the center console, which makes tuning a long reach, even for those wearing 36-inch sleeves. Despite a passenger-side fascia stuffed with an air bag, there’s also a glove box; but only a cube of a cubby between the seats, and door trays that are little more than a suggestion.

Puttering around town, the Protege ES is well enough insulated to keep road noise and sound pollution at non-irritating levels. The five-speed manual doesn’t have the silkiness of, say, a Honda Accord, but its resistance is just enough to keep one thinking about the job at hand, without ever opposing the physical effort of shifting.

The car’s element seems to be a rapid canter to those realms that give John Law reasonable cause for lurking on medians. The steering is pure Mazda: quick in response, true in tracking and creating laser-true cornering.

At speed and never below 4,000r.p.m, slipping from fifth to fourth, to third and back to fourth, produces slowing, acceleration and stability in all the right quantities.

It is not blinding power and whiplash acceleration. Itis agile, peppy performance that elevates stitching through traffic to the edge of exhilarating. In this, Protege stands among the leaders of the subcompact pack.

Yet some critics have slapped the car for lacking spirit and soul. They say that Mazda–with a reputation for building for niches, the company that gave us the rotary-engined RX-7 and the Mazda Miata–should have given Protege something really novel to push it ahead of intense competition.

Why not stuff the car with all manner of computer systems?

It might have a sterling future as the Mazda Prodigy.

I've driven this car for the last 13 years. I received it while in high school and I still drive this car everyday. It currently has 320k miles. Little maintenance is required. No major work has been done. (knock on wood).

I absolutely love this car

January 29, 2008
By Mazda Owner from Arkansas
Owns this car

I am 22 years old and I own a 1994 Mazda Protege LX. I can truly say that this car takes me everywhere I need to go and it's great on mileage. I plan on keeping this car forever.

April 20, 2007
By Vitaly from Bellingham WA
Owns this car

Truthfuly, I thought the mazda was like an everyday car but when my 94 protege hit 240,000 miles with only minor tuneups and new water pump I was really surpised. The motor doesn't take any oil an it gets about 33-35 to a gallon. I had nissans, toyota's, an honda's but this car lasted the longest. It's a good deal for the money especially for driving to work an school an not worrying about expenses. Every monring I wake up I know it's gonna start. 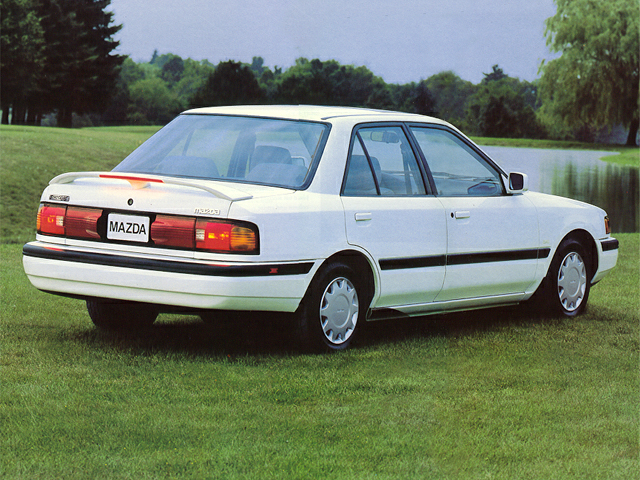