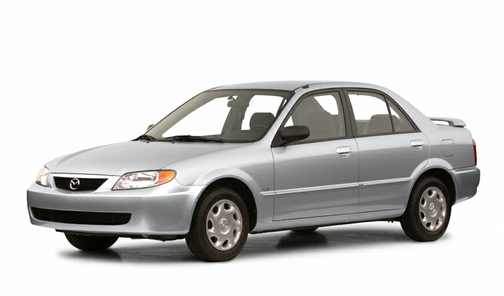 Our 2001 Mazda Protege trim comparison will help you decide.

You don’t need a week in the new Mazda Protege MP3 to draw some decent conclusions. A day will do. Make that an hour. No, a minute. Depending on your point of view – and likely your age – about 60 ticks in the cross hairs of the MP3’s fury will give you all the ammo to know this midsize, unassuming, sporty sedan is really Axl Rose in disguise.

Welcome to the jungle and goodbye acute hearing. Gone in 60 seconds, guaranteed.

New for 2001, in what Mazda calls its Performance Series lineup, the Protege is a decent ride with a stadium-sized radio that can handle anything you throw its way – either Memorex or MP3 digital audio burned in your best friend’s basement. Hence, the name of the car, and a sizable understanding why it’s $2,000 more than a Plain-Jane Protege ES. But to say it’s just a stereo is to say sled dogs generally prefer red meat.

As one auto critic noted, the MP3 isn’t really a vehicle. It’s a gasoline-powered radio. It’s notch 10 on your home system. It’s Gilbert Godfried with a bullhorn. It’s 20 teen-agers in a 5-by-9 cell with ‘N Sync. And, overall, it’s not a bad car.

Sure, the MP3’s 280-watt Kenwood Excelon Z919 head unit is a disco ball of flashy electronics and fancy buttons all hooked to a thub, thub, thub of a subwoofer better suited for Rage Against the Machine than Ray Charles. But it’s a radio.

The MP3’s real charm is in its firmer springs, stiffer control-arm bushings and an upgraded engine that keeps it fun even when your only musical selection is tires on pavement. Not that that’s all Mazda thinks is fun. They’d like you to believe, in this case, a good car starts with a great set of tunes, ergo: the MP3.

Although you’d have reason to believe Mazda brought in a set of 16-year-olds to tweak its Protege, the MP3 idea actually came out of a meeting with straight-as-plaid sales managers. The sales folks at Mazda thought it would be a good idea to build a niche vehicle, something appealing to either the teen-age son in the family or the father who hadn’t yet lost his hearing, but wanted to.

Modified from an original auto manufacturer’s show car (called the MPS), Mazda took its traditional Protege, spruced up the exterior like a tricked-out street racer, added fatter, 17-inch wheels, a spoiler and (did we mention?) the radio.

But first, the car.

The Protege has always been a critic’s friend. It clobbers the compact sedans and valiantly spars with the bigger boys, and for good reason: It’s fun. Fortunately, when the designers tweaked the sound system they also bolstered a few other parts.

With revised steering this year, the MP3’s roadability is still topshelf, and maybe slightly above the other Protege’s we’ve driven. With 17-inch wheels tied to a leatherwrapped three-spoke steering wheel, it is truly form and function melding into one. Handling is responsive and the 2- liter twin-cam four-cylinder gets a boost of 10 horsepower (140 total) and seven pound-feet of torque over previous models. Not great power, but decent given the vehicle’s weight.

And because what’s around the engine is tuned so tight and lightweight – supportive bucket seats, a shifter with a short throw and an engine that wants to rev – the MP3 maneuvers and grips the road, eating up challenges. Tight corners? Not much swing and sway. Tight traffic? Zip in and away.

What helps out are the upgrades that come courtesy of Racing Beat in Anaheim, Calif., a company that loves to turn Honda Civics into Honda Un-civils, with aftermarket ad-ons. In the MP3 that means Tokico shocks and a tight ride that will have you bouncing to the music, even if you don’t want to.

Outside, they’ve lowered the Protege about an inch and added two spoilers, side skirts and rounded headlamps that make it seem more attacking in its stance. Inside, the details don’t go unnoticed.

MP3’s brushed silver highlights are all over a very sporty cabin that will sit well with the driver or any of the three or four (in a pinch) other passengers. The splitfold rear seatbacks open to a largeenough 12.9 cubic foot trunk, but rear leg room is tight in the back, especially when you load down the kids or luggage. And, speaking of kids….

The real highlight is in what you hear. With a flick of a switch, the disco ball drops and Mazda’s newest creation is released. Smack dab in the middle of a colorful, and color-coded interior, is the heart of the MP3. But it’s the ears and brain that will do most of the work.

If the KABOOM! sound of the four-channel system doesn’t throw you, figuring out the stereo just might. Mazda throws in a handy little scorecard to help you figure out the tough things – like, how to turn it on – but it’s the easy things that seem impossible. Volume? Over on the left, but not clearly marked. Change the station? Better bring your microscope. Everything on the MP3’s stereo is MP-small.

The flashy graphics are interesting but the controls are so tiny that changing from AM to FM was like conducting neuro-surgery. And don’t try adjusting things during the day. In the glare of the sun, the graphics and type are washed away like the sound of your voice on Level 15 volume.

The key with the MP3 is obviously…. MP3s. In this model, the Protege offers the industry’s first production MP3-capable stereo, meaning it can play compressed music downloaded off the Internet.

The sound itself, when at a normal level, is downright amazing. With each of the four door-mounted speakers churning out 45 watts, then adding the 10-inch cochlea-compressing 100-watt subwoofer, it was like a cheap night at the Philharmonic.

And speaking of cheap…. Priced at under $19,000, the MP3 competes well with the Honda Civics and Nissan Sentras of the small-car world. It even gets 25 mpg in the city.

For the value, performance, fun and tunes, it’s not a badly-priced package. Does it need all those watts? No. Will it sell? You bet. Will you be able to hear after your 17-year-old son has spun you around in one?

I’ll give you 60 seconds to decide.

Price as tested (including options, destination and delivery): $18,530

The car is nimble and fast for its age. Relilable

Excellent Gas MPG, Fog Lights, Sunroof, it a Mazda! Interior good everything is well laid out also back seat folds down / More cargo space than you think, FROM JAPAN! It has a spoiler how cool is that!

April 25, 2018
By Sisiandleia from Buffalo, NY
Used to own this car

I loved this car. It was fun to drive, very reliable and had great steering. I did regular maintenance, and nothing malfunctioned. Stylish and peppy too, zoom zoom.

August 16, 2017
By Scientist from Maryland Hts, MI
Used to own this car

Still ran well after 16 years. No major problems. Sold it to upgrade to a new Highlander. Wife says nest car will be a Mazda. 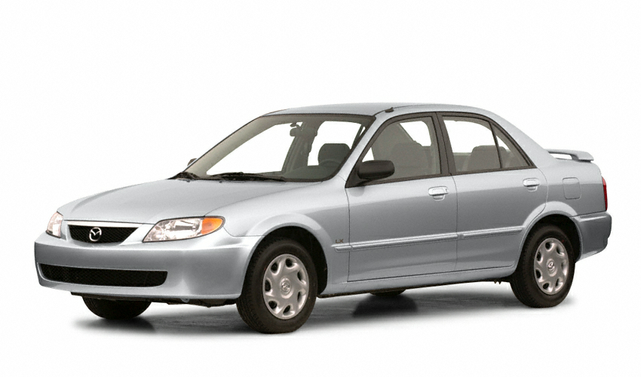 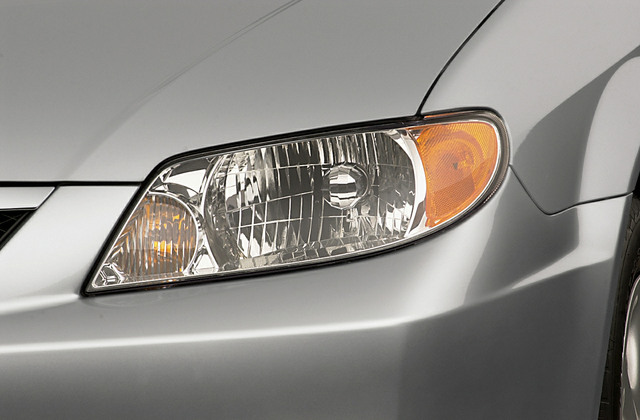 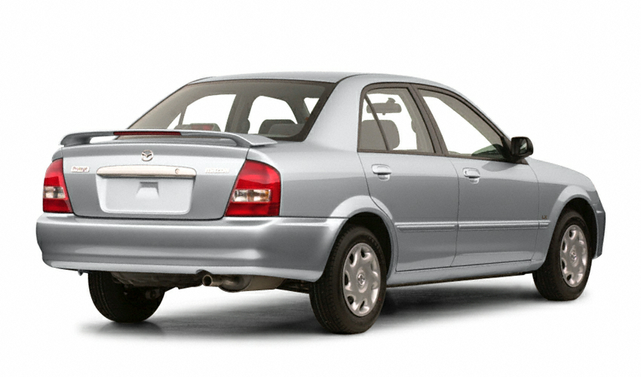 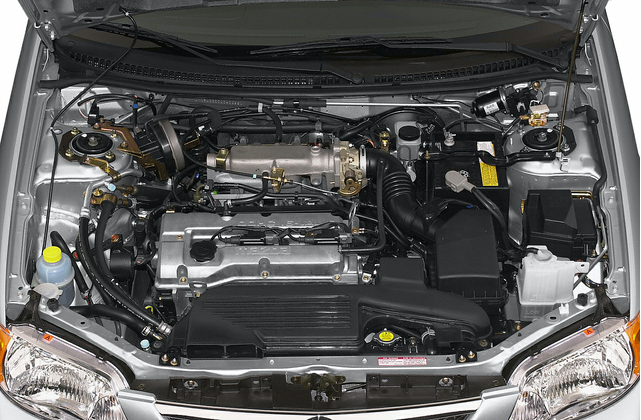 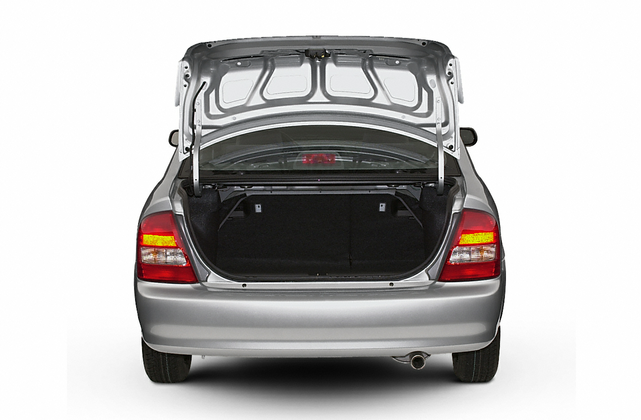 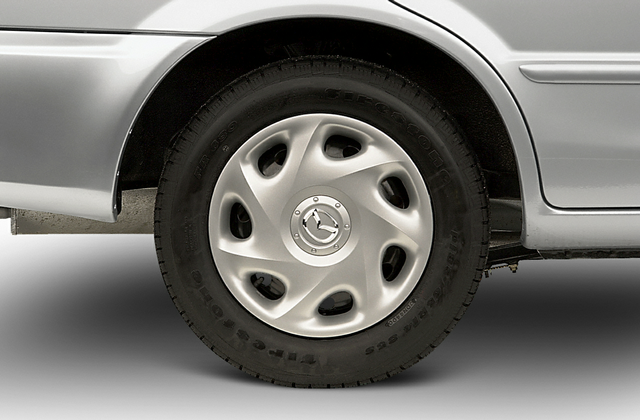 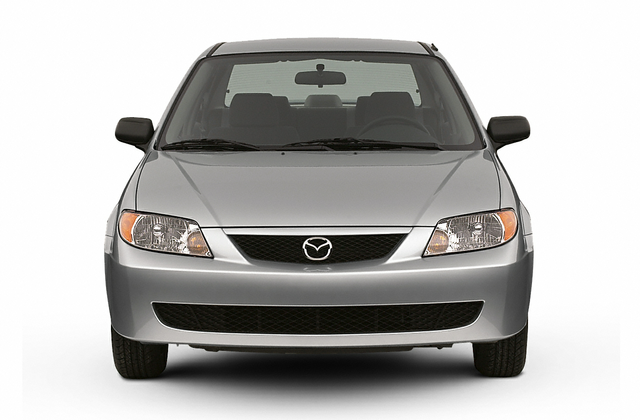 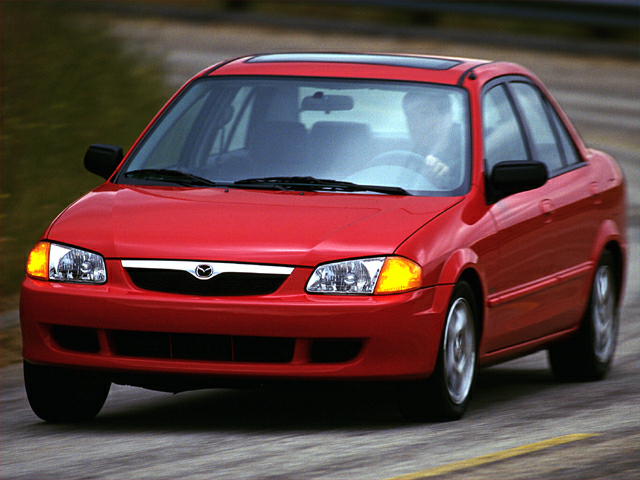 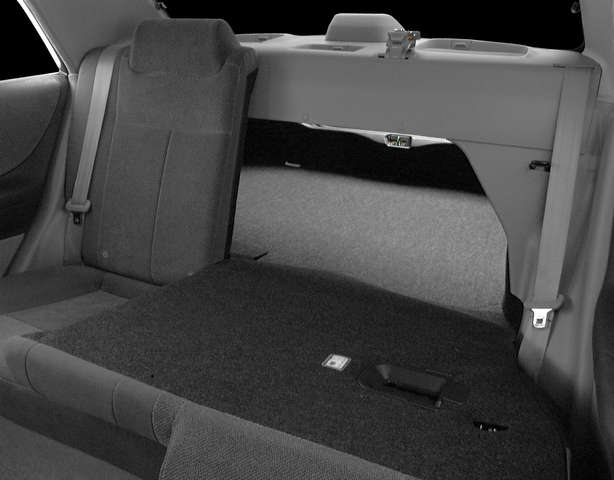 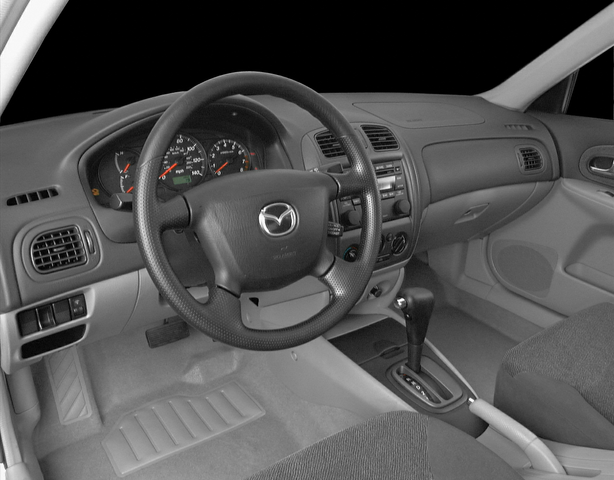 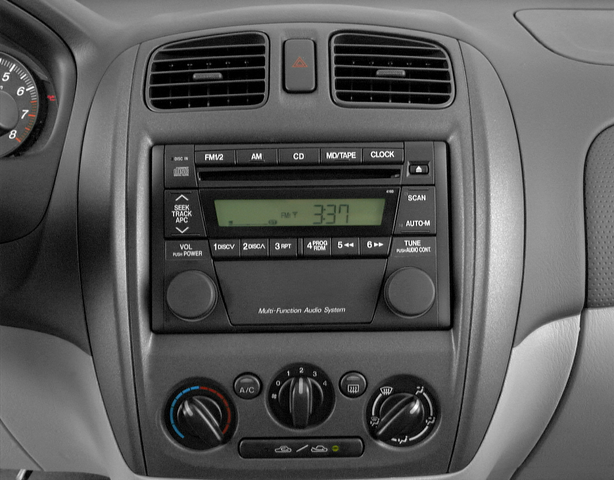 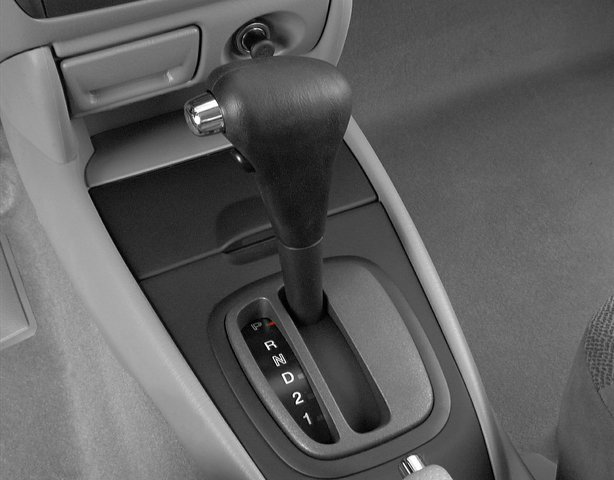 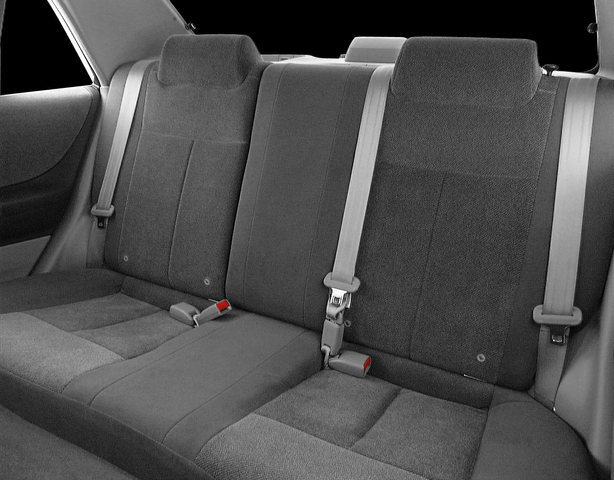 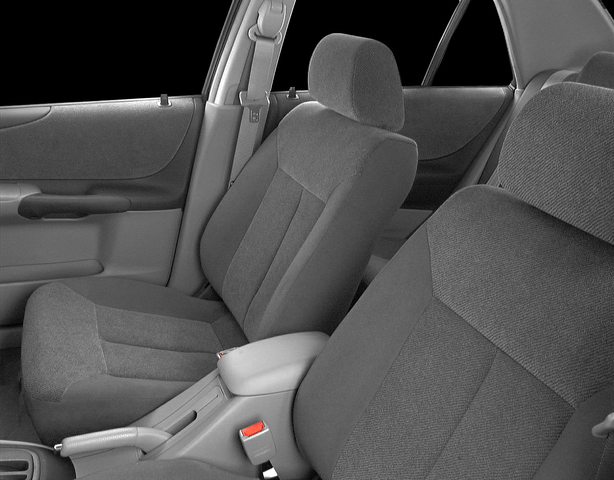 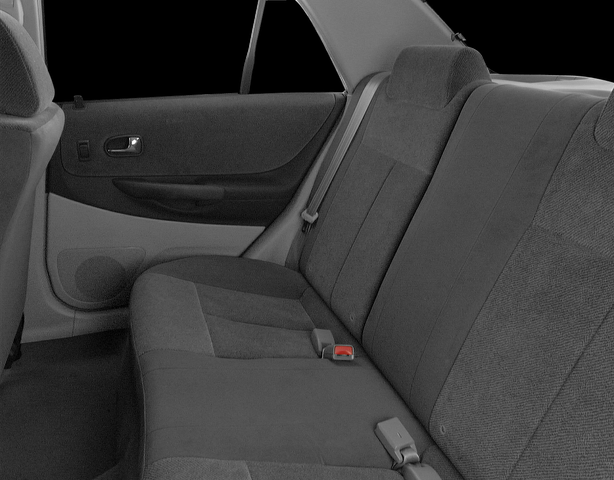