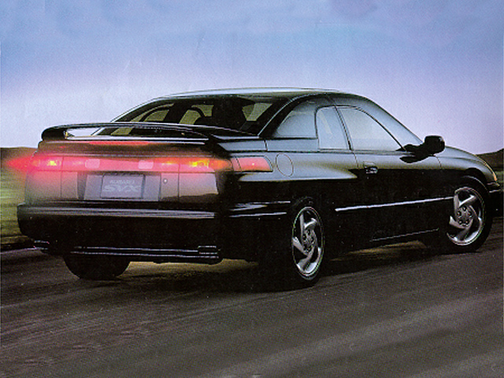 Our 1992 Subaru SVX trim comparison will help you decide.

The Subaru SVX is a sterling example of why image is so important to a car company.

Who would think that one of this year’s best sport coupes would be wearing a Subaru badge and a window sticker with a price dangerously close to $30,000?

Before this model year, Subaru’s only other attempt at a sports coupe was the ghastly XT, a poor copy of the wedge-shaped Triumph TR7. The XT, finally put to rest last year, was one reason Subaru’s place was secure in the bush leagues of the auto industry.

But all that may change with the launch of the SVX.

This is a serious sports coupe. The styling – by Italian car designer Gioretto Giugiaro – is fresh, original and right on target for those who like to ride the cutting edge of technology and fashion. The engineering is first-rate, and the fully loaded SVX packs tremendous value for the money.

If you tend to snicker at the notion of a $30,000 Subaru, a test drive likely could cause a reappraisal. If the SVX shows what Subaru is capable of, then the Japanese automaker may one day earn a parking space in the big leagues alongside Mazda, Mitsubishi, Honda, Toyota and Nissan.

The SVX is the world’s only car with a front-mounted flat-six engine. It is a silky-smooth aluminum 3.3-liter double overhead cam powerplant that cranks out 230 horsepower.

Subaru makes the SVX with only a computer-controlled four-speed automatic transmission. There’s no five-speed available, and that’s too bad, because a car like the SVX cries out for a stick shift. It’s still the most efficient way to get the power to the wheels.

All-wheel drive – a standard feature on every SVX – places Subaru’s new sports coupe in a special class of vehicles.

But let’s put the brakes on the praise for a minute. A Subaru wouldn’t be a Subaru if it didn’t have some quirks. The SVX has a few, but this time, they are minor.

First gear launches the car from a standstill with enough force to knock the driver back in his seat. But when the transmission shifts into second and third gears, the G forces drop radically. The gears are so steep that the engine labors to maintain the car at a quick pace.

Because of this inconsistency, it almost feels as if the car has a turbocharger kicking in. The straight-line acceleration seems somewhat erratic.

Most of the power comes on during high-speed passing. At 50 mph, the SVX cruises along in tomblike silence, but if you press the accelerator to the floor, the transmission downshifts into third, the engine winds up and, with a throaty roar, delivers to the wheels every one of its230 horses. The car has thunderous passing power in the 50-to-65-mph range.

The Subaru SVX goes from zero to 60 mph in 7.3 seconds. It is rated by the Environmental Protection Agency at 17 mpg in city driving and 25 on the highway.

One of the best features of the SVX is its ability to perform sports-car gymnasti cs without a stiff, spine-snapping ride.

Driven easily, the SVX is as comfortable and quiet as a luxury sedan. Pushed to the limit, the SVX retains its composure in maneuvers that would leave lesser cars in the dust.

The all-wheel-drive system ensures maximum traction. The tires don’t lose their grip even when the accelerator is floored on wet roads, so fast cornering presents no problem for the SVX’s suspension, a four-wheel independent affair.

There is more high-tech hardware underneath: All SVXs come with power rack-and-pinion steering and anti-lock four-wheel disc brakes, plus fat 16-inch tires. When the $3,000 touring package is ordered – as with the test car – the power steering becomes speed-sensitive; that is, the firmness of the steering wheel increases with the vehicle’s speed.

The SVX’s interior takes some getting used to. It is, in fact, the car’s only weak point. The interior is by no means an inhospitable place, butI am going to nitpick two items: the windows, and the suede like inserts on the dash and door panels.

The SVX’s windows are unique. Subaru calls the set-up a ”window within a window.” The side windows consist of two pieces of glass separated by a thick black band. When you open the window, the lower portion drops while the upper half stays in place. The open window area is smaller than on most other cars, but this doesn’t present a problem at toll booths and drive-through restaurants.

The driver always sees the band out of the corner of his eye. The window within a window system gives the SVX a light, airy feel and terrific visibility because there is more glass, but the band is a constant nuisance.

The dash and door panels have inserts made from a synthetic material called ecsaine. It looks tacky in a 1960s polyester kind of way. The door panels and dash would look much better if they were made entirely of leather or the high-quality vinyl material used on the rest of the interior.

Those two gripes aside, the SVX’s interior is comfortable, nicely styled and arranged with a nod toward user-friendliness.

The SVX has the easiest, most sensible controls for air conditioning, heating and defrosting I have seen in a long time.

Two rows of buttons direct the air flow, while a clear round dial with a red arrow on top and a blue arrow on the bottom adjusts the temperature, which is displayed electronically inside the dial.

Sports coupes are not usually known for providing generous trunk room, but this is another area where the SVX breaks from the crowd. Five or six grocery bags will easily fit.

Head turner, attracts attention every where I go

Love the all wheel drive, handles great. Smooth power, comfortable ride. The window design makes for great visibility. Would have loved a manual transmission though not available

Get one if you can.

71 years old forgot some of the women and cars I've been with in all sizes, powers and types both foreign and domestic: but this one car looks sharp and feels sharp too.

March 15, 2012
By subyguy from Pennsylvania
Owns this car

This car is completely unique. It is fast and extremely reliable. for a 20 year old car it is very high tech. cd and cassette player. outside temperature display. Smooth ride, just an awsome car.

All model years for the Subaru SVX 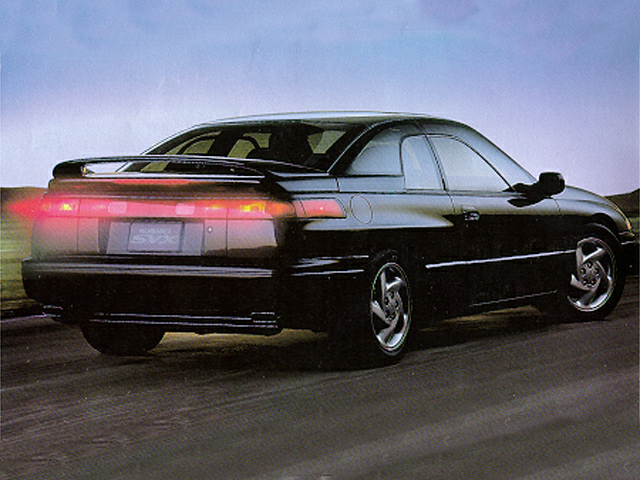