Our 2021 Bentley Bentayga trim comparison will help you decide.

The verdict: Changes to Bentley’s Bentayga ultra-luxury SUV for 2021 give it a more up-to-date feel without sacrificing the luxury for which it’s known.

Versus the competition: It’s more luxurious than any of the Range Rovers but still doesn’t feel quite as special as a Rolls-Royce Cullinan — though it isn’t as expensive as one, either.

The Bentley Bentayga may be faintly related to an Audi Q7, but you’d never know it if someone didn’t tell you. To that end, I’m going to say it doesn’t matter. What does matter is what Bentley has done with the latest version of the Bentayga, updated for the 2021 model year with all-new styling, a freshened interior and a new multimedia system. The 2021 redesign has more features with more luxury details, making the latest Bentayga just a little bit newer and a little bit nicer.

Every Body Panel Is Changed

You might not realize it unless it was sitting next to an older model, but every body panel on the new 2021 Bentayga has been touched by the redesign. It starts up front where new LED matrix headlights sit higher, and a new grille sits a bit lower than the outgoing design to bring the front end in line with Bentley’s Flying Spur sedan and the Continental GT coupe and convertible (the flagship Mulsanne is sadly no more). The side panels aren’t all that different from the 2020 Bentayga, but the changes are most noticeable out back where the rear styling is entirely different — gone are the big “stacked B” taillights, replaced by jeweled oval units that have more in common with the Continental coupe than the Flying Spur sedan.

I’m not sure this look works for the Bentayga, however. The latest look of the Flying Spur and Continental GT is gorgeous because their fenders and dramatically huge wheels give them an imposing, swept look that isn’t really working on the big, bulky Bentayga SUV. It’s not long, low and mean, it’s just bulbous and tall with taillights that look too small and seem to be swimming in the liftgate’s sheet metal. I’m not sure the public agrees with me on that, however, as this thing turned heads on the streets of Ann Arbor, Mich., like no SUV I’ve driven since my stint in a Rolls-Royce Cullinan. Cellphones came out several times and onlookers snapped pics of the Bentayga as I rumbled quietly around town for a weekend. I don’t think it’s unattractive, I’m just not sure it works quite as well with this styling as the other two Bentleys.

Carrying over from the last Bentayga is the twin-turbocharged 4.0-liter V-8 engine making a stout 542 horsepower and 568 pounds-feet of torque. It’s mated to a standard eight-speed automatic transmission routing power to all four wheels. Air suspension is standard, as is the Bentley Dynamic Ride control system that keeps the big SUV planted in corners, minimizing body roll and improving grip. The big SUV is smooth on normal pavement, with seamless acceleration that comes on in a rush after a bit of hesitation from pushing the accelerator. In the Bentley’s drive control mode selection’s Normal mode, throttle response and suspension settings are decidedly relaxed as transmission shifts happen early and slowly, aimed at disturbing occupants as little as possible. Switch it into Sport mode and things firm up a bit, with throttle response becoming decidedly more aggressive, shifts occurring later in the rev range, and the ride quality stiffening up to the point where you’ll probably snick the controller back into Normal mode sooner rather than later.

The big 22-inch wheels with Pirelli tires do only a fair job of soaking up bumps and broken pavement. Over smooth surfaces, the Bentayga is silky and unflappable, delivering a serene driving experience that lulls you into a relaxed mood. But when the pavement gets potholed, broken and choppy, so does the ride quality — you can feel the air suspension and active body control trying to keep up with the changes in the pavement. It sends the big SUV bobbing and dipping in various directions in short order, leaving occupants unsettled and wondering what happened to the dreamlike ride they were just enjoying a moment prior.

The Bentayga’s steering feel is quite isolated and effortless, in keeping with the idea of a luxury SUV. This isn’t a burly Mercedes-Benz AMG-kissed SUV. No, this is a luxury touring wagon, and while the effort increases when you switch it into Sport mode, there’s really nothing about the Bentayga that invites you to drive aggressively. It’s too heavy for that kind of action despite the decent job that Bentley engineers have done in disguising the SUV’s weight through quick-ratio steering that makes it feel more nimble than it is. There are also several off-road modes, but I’m stumped as to who might be going rock crawling in a Bentley Bentayga or why any of those off-road settings are needed.

No, the Bentayga’s mission is more about rapid, isolated, comfortable highway conveyance in sumptuous surroundings than entertaining its driver or heading into the woods, and in this mission it does rather well.

How Do You Upgrade the Upgraded?

The interior of the last Bentayga was already opulent, covered in acres of fine leather, real wood veneers, machined metal and chrome, but it did suffer from some shortcomings mostly due to an aging multimedia system, which has been replaced for 2021 with a new 10.9-inch touchscreen-based system.

The new interior doesn’t look too different, but then it didn’t really have to in order to be successful, it just had to be nicer than the last one. By this measure, Bentley has succeeded: The dash is a slightly different shape, still keeping the symmetrical dual binnacle design that allows for easier switching between left- and right-hand-drive versions. Bentley replaced the center console with one that has wings and swapped out the round climate control vents for new ones that sit atop the console, flanking an analog Breitling-branded clock. A revised steering wheel is shared with the other Bentley vehicles and moves the leather stitching to the inner rim so you’re not always running your hands along it when driving, a nice touch that increases comfort while still looking classy. As before, given that this is a Bentley, the options for interior color combinations are many and can be tailored to just about anything you like within reason — and if you have enough cash, anything you like without reason.

It’s super-comfortable inside the Bentayga, as you might expect from an ultra-luxury SUV. The revised front seats are large and multi-adjustable, although you’d best study the controls on the side of the seat before you sit down; they can also be adjusted via the central touchscreen, if you want to go digging through menus. Front-seat room is spacious in every dimension and now features plenty of storage room for personal electronics and other items.

The second row is more comfortable, as well, thanks to revisions to the seating structures that have added roughly 4 inches of usable legroom, according to Bentley. The second row can be had in either four-occupant configuration with a central dividing console or the five-occupant set-up in my test vehicle with bench seat. The bench allows for new second-row seat ventilation, which is useful when the massive panoramic moonroof heats up the SUV on a warm, sunny summer afternoon.

A third row is optional, and the cargo room is about what you’d expect for an SUV of this size, albeit a little low given the sloping rear roofline and high liftover height. Bentley says the revised seating arrangement now puts them in competitive reach of the Land Rover Range Rover Long Wheelbase model; I believe it, because there really isn’t a bad seat in the house. In a vehicle this expensive, quality doesn’t drop off when you switch from the front seat to the back; the same beautiful wood, smooth quilted leather and creamy operation of the controls are present throughout the entire SUV. That makes sense, because many Bentaygas also serve as chauffeured limousines depending where in the world it’s being sold.

What doesn’t work so great? Some of the new multimedia system features and the digital gauges. The wireless connection that enables use of your smartphone for Apple CarPlay (but not Android Auto) isn’t seamless even after you’ve first paired a phone. It often requires you to re-pair the phone, reactivate the wireless or Bluetooth connection and rediscover the connection via the touchscreen every time you start the car — or sometimes it works perfectly without you having to do anything. Perhaps it’s just an early preproduction software bug, but it’s something to test should you be considering one for purchase. The 10.9-inch touchscreen is nice, however, as it uses the full width to display Apple CarPlay. The native vehicle systems are also easy to use and navigate, naturally bearing some resemblance to the latest Audi systems.

The other curiosity is the new digital gauge cluster behind the steering wheel, which apparently only illuminates the numbers adjacent to the electronic needles on the dial, leaving the rest of the display dimmed and dark with no way to illuminate the whole thing. Given that the gauges are something you’re always looking at, and that in other Bentleys they have been a source of artistic distinction and expression, it seems odd to leave them blank and doesn’t add anything to the luxury appeal of the SUV. If there was a way to illuminate the whole gauge display as normal, I couldn’t find it after a full half-hour of poking around in all of the Bentley’s settings.

Price: You Know It Isn’t Cheap

Yeah, it’s pricey. I don’t even list that as a negative anymore because you have to expect that it’s going to be expensive. We don’t have an exact sum for this test vehicle because it’s still a preproduction model sans a full window sticker, but the 2021 Bentayga starts at about $177,000 and could  top $250,000 or more once you’ve started adding options and customizations. The V-8 “base” model will eventually be joined by two more variants, a plug-in hybrid and a W-12-powered Bentayga Speed model.

The Bentayga’s latest update makes what was an SUV designed to appeal to a very specific customer likely even more appealing: It’s nicer inside, it’s more distinctive outside, and it still rides and drives like the plush, expensive chariot it was designed to be. The last model became Bentley’s fastest-selling model in its history with 20,000 built in its first iteration. The latest one with its freshened features only continues that appeal.

News
Which Cars Have Panoramic Moonroofs or Sunroofs?

All model years for the Bentley Bentayga 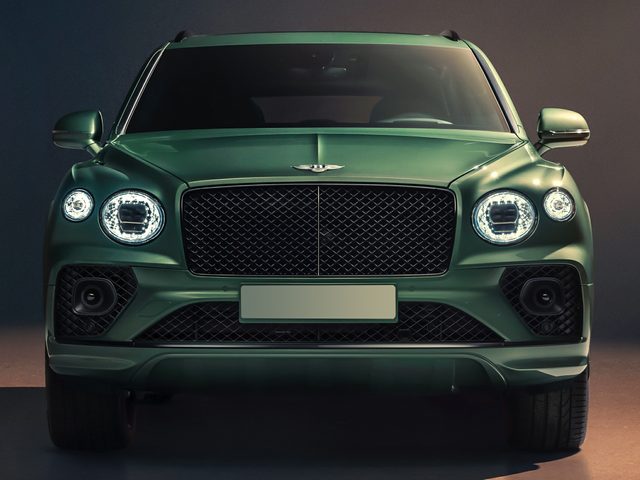 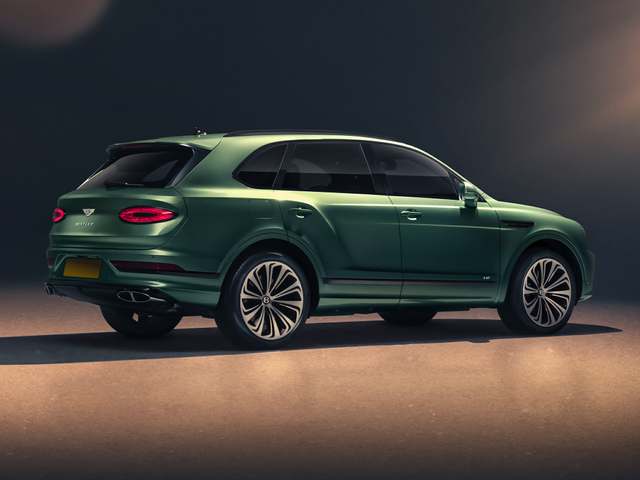 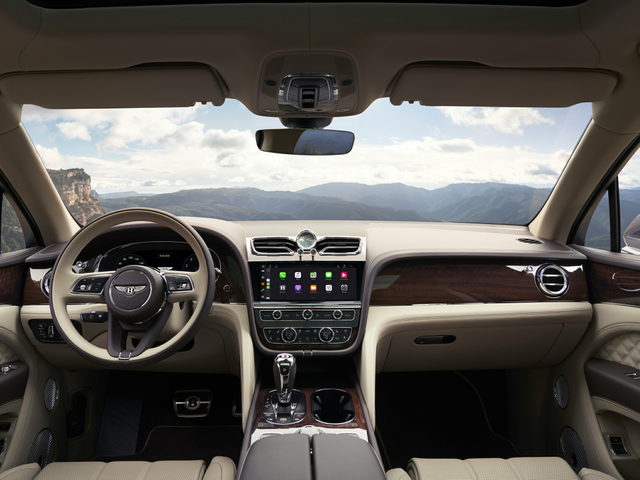 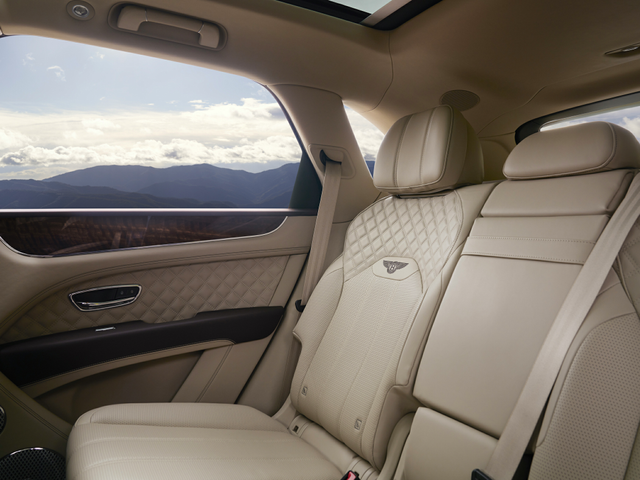