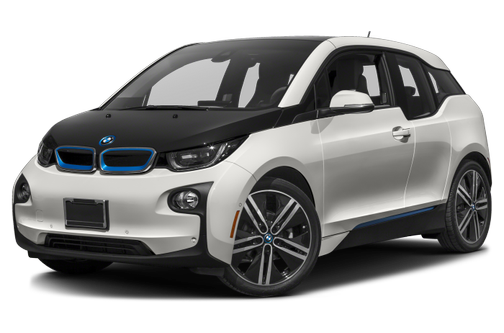 Our 2016 BMW i3 trim comparison will help you decide.

The 2016 BMW i3 is a four-seat electric hatchback that competes with vehicles like the Nissan Leaf, Fiat 500e, Kia Soul EV, Volkswagen e-Golf and Chevrolet Volt. The rear-wheel-drive 2016 BMW i3 comes in two trim levels: a Base trim that has a range of 81 miles according to the EPA, and the Base with a gasoline-powered generator that reduces electric range to 72 miles but extends overall range to 150 miles according to the EPA.

There aren't any significant new features on the 2016 i3, but BMW did offer a 50-unit release of a Shadow Sport Edition featuring black exterior paint, 19-inch wheels, a sport suspension and a moonroof.

How Does the 2016 BMW i3 Compare to Other Electric Hatchbacks?

The i3 may appeal to some environmentally conscious, status-oriented drivers who are willing to pay a premium for the BMW brand over a Nissan or a Chevy. However, the BMW i3 offers less electric range at a higher price, making other electric hatchbacks a better value.

What Features in the 2016 BMW i3 Are Most Important?

The i3's standard charging time is 3.5 hours at Level 2 – 240 volts and adequate current – but public DC fast charging capability provides an 80 percent charge in less than 20 minutes. The BMW i3's only traction motor is a 170-horsepower electric motor, and it comes standard with a 22-kilowatt-hour lithium-ion battery pack and a one-speed automatic transmission. The i3 comes with standard luxury features including a navigation system, heated front seats, automatic air conditioning, a 50/50-split folding backseat and a tilt/telescoping steering wheel. Its exterior includes LED headlights and taillights, as well as traditional front doors and rear-hinged back doors.

The i3 offers a number of available safety features, including a backup camera, adaptive cruise control and a forward collision warning system. Drivers can also upgrade the i3 with luxury features including leather upholstery and Bluetooth audio streaming. The available 34-hp two-cylinder gas engine-generator adds an EPA-estimated 78 miles of range per fill-up.

As is required in every new car, the 2016 BMW i3 comes with standard front airbags, antilock brakes and an electronic stability system.

The 2016 BMW i3 is spacious and comfortable, and its turning circle and compact size make it suitable for city driving. Its acceleration is satisfying, and it gets good overall range with the available gasoline extender. If you're willing to pay a higher price for a more comfortable electric hatchback, it's worth a test drive.

However, it's most viable with the range extender generator – which not only costs more and reduces EV range, but also prefers premium gas and requires midgrade as a minimum. The lack of standard Bluetooth audio, an AM radio and a backup camera also means you'll have to pay more for features you'd find standard elsewhere. Finally, its low-grip tires make for unreliable driving in certain conditions.

Great car. Super fast, economical and overall just plain fun to drive. Bargain for the price. Be sure and get the range extender option. Head turner.

October 5, 2020
By Michael from Las Vegas
Owns this car

This is the most fun car to drive. Its so quick off the line no one will beat you. The inside is very spacious compared to what you would think. Lots of room for all my photography lights and gear. The range is plenty for zig zagging across the city to all my appointments for the day. I rarely in ever use the range extender but it's a nice peace of mind knowing it's there.

This car has many of the BMW attributes - great to drive, strong performance, and nice balance. However, before deciding to buy this car be aware that the depreciation on these vehicles is outrageous. A base price for a new 2016 I3 with range extender was more than 47,000 and I just recently returned mine to the dealer as a buy back due to poor range (I was using it for work) and I only received a bit over $13,000 for it. So basically the car is dropping in value by nearly $10,000 a year. A new i3 I saw in the showroom was more than $58,000 now. You are much better to invest in a standard BMW which doesn't depreciate like these cars and pay a bit more for gas.

All model years for the BMW i3