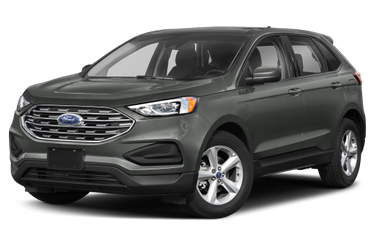 Love the way it drives, good gas mileage, comfortable. Perfect size vehicle, not too small, but not too large. Love the options and nice size storage in back.

My car is the Edge Titanium and has most any option any driver might need or want. Great quiet ride with amazing lane keeping ability while in cruise mode. While the car has only a four cylinder engine, it has plenty of power with Eco Boost to be plenty powerful for my needs. I purchased it four months ago as a 2019 leftover and got a great deal.

Really ease to enter and exit..comfort

We like this car very much. All the bells and whistles make it fun and safe to drive..I do not like the button you have to push to disable auto shut off engine....not needed. The eight speed transmission is great except at slow to stop speed it hunts which gear it needs to be in.clunk clunk...sounds so cheap. I deal with these and just accept it

Great trim package for this model.

I like this model, it's powerful, sporty & gets good gas mileage. It is also comfortable & fun to drive. Great acceleration and handling. A joy to drive.

LOVE it so far!

I just purchased a used 2019 Edge ST and so far I love it. I had no knowledge of the ST line until I started looking for used cars. Though I have owned an Edge SEL for 12 years prior to buying this one, the ST is so beautiful, comfortable, sporty and overall such a fun vehicle to drive. Can't wait to take it on a long trip and learn all the features it has to offer!

Practically drives it self!

I really love this vehicle and the dealer I bought it from Action Auto in Cortland, NY. This is the third vehicle we have purchased there.

September 8, 2020
By tjsek from Western Kansas
Owns this car

I LOVE my new Edge ST. The seats are comfortable and there is plenty of leg room. You can not beat the performance. I bought the ST with a 2.7 L EcoBoost 6 cyl engine. There is plenty of get up & go to pass without stress. In fact, it's hard to keep all 335 horses in the stable. The storage under the back is great - trays to hold jumper cables, a few tools, and a rain poncho. The only thing I don't really like is the location of the gear selector. When the sun shines in, you can't see the red light on which gear you've selected. Even with that, I would buy it again in a heartbeat.

I bought a 2019 Ford Edge Titanium in February 2020. I had an accident with a coke in a styrafoam cup where my straw went through the cup and lost all my coke in the cup holder which is in the middle console. The liquid filled up both cup holders. I was driving but 30 seconds away from my destination which was a friends house. I quickly called her and told her to bring out paper towels so i could soak the liquid up obviously. By the time i pulled up, she was already outside with a wad of paper towel for me. I go to soak up the liquid and it was GONE. Like gone gone. Soooo, i was like, ok, weird but "i guess". I continue on with my day. This was on Saturday the 29th. On Sunday the 30th of August, i was again driving my car and all of a sudden i lost all my dash lights. Everything. I also could not use my AC or roll down windows. I took my car home and parked it. I tried to start it again after several minutes to see if it would all light up again. It would not start. I waited several more minutes and tried it again. It started, had all my lights on but the "check engine" light remained. I shut it off again. Restarted it several minutes later and it started but no dash lights again. I turned it off. Waited several minutes and restarted it and again, it would not start. At that point i left it alone and didn't touch it again until the next day. The next day, i go out and start it and it started. I had all my dash lights and check engine light was on still. I drove it to the Ford dealership to have it diagnosed. The whole drive there i gained my dashed lights and lost them periodically. I could not drive my car over 30 mph. I finally reach the dealership. I turned off my car under the bay but realized i needed to drive up a lil more. It wouldn't start, AGAIN. SOOOO...this is where my complaint begins. I tell the service person that i did not know what was going on my car was doing all this crazy stuff with the dash lights, not starting, and check engine light remains. Now mind u, i had totally forgotten about my accident with the drink at that time, so i of course did not mention it. I sat in the waiting area about 45 minutes. Service person comes finally to tell me that I would need to get a ride home because "they have no idea what is wrong with my car, they had never seen anything like this before" I then call my warranty people to see how to go about getting a car rental under my warranty. They explain to me that i would need a "diagnosis" before a rental car can be approved. SMH. SOOOO....since a diagnosis wasn't possible at that time, i called a ride and rented a car from Enterprise. Now we are at yesterday. Before i went to sleep on Monday night, i randomly thought about my car, the idea that they didn't know what was wrong with it and i for the life of me could not understand HOW they would NOT be able to figure out their own brand of car THENNNN it hits me. I had that accident with the drink on Saturday...just ONE day b4 my problems started. I go to sleep with the intention of calling them the next day to tell them of my accident, EVEN THOUGH, I felt that it was probably stupid to think THAT could have done anything. I qm 43 years old, i have wasted MANY OF A DRINKS inside drink consoles in cars. Please believe. But hey, if there is a possibility, i should tell them. So Tuesday, instead of calling, i go to the dealership. I am informed that there is STILL no diagnosis, which meant i STILL couldn't get a rental reimbursement or anything without a diagnosis. I tell the service lady up front of my accident on Saturday with a styrafoam cup in my drink holder. She relays that to the mechanical team and they were very happy for that information because they had NO clue apparently that there was sensitive parts in the console of a Ford Edge. I leave there with the understanding they would call me once they checked it out. So this morning, i am awakened by a call from the dealership. It WAS indeed a problem because of the drink i wasted in the CUP HOLDER...and furthermore, it is NOT going to be covered under my warranty Wait, WHAT???? IS THIS EVEN POSSIBLE I need to know how something like this even happens. WHYYY were sensitive parts installed or built inside of a CUP CONSOLE that is NOT secure or protected? I spoke with Ford who has now told me there is NOTHING that can be done about this.

Friends recommended this vehicle for us.

Quality performance all the way . Very steady on the highway. Very roomy on the inside so you don't feel boxed in. Plenty of trunk room for travel.

This car checked all the boxes in a vehicle that i needed. The ride is smooth and the interior is roomy. bluetooth and navigation system is awesome

Rating breakdown (out of 5):
3 people out of 3 found this review helpful. Did you?
Show full review