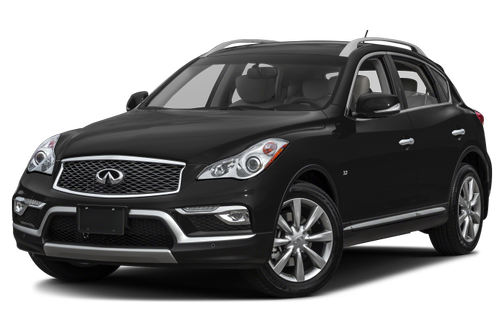 Our 2016 INFINITI QX50 trim comparison will help you decide.

The Verdict: The 2016 Infiniti QX50 offers great value in a luxury SUV, with pleasant driving dynamics to boot, but buyers looking for the latest styles will want to shop other stores.

Versus the Competition: It’s not as big inside as its competitors, but it offers one of the most powerful engines in its class as standard equipment. It doesn’t nickel-and-dime you for the most basic options, and it feels luxurious inside. The extra length added for 2016 makes the backseat tolerable, but cargo capacity and fuel economy still come up short.

The Infiniti QX50 is a compact SUV built off the company’s entry-level rear-wheel-drive sedan, the Q50. It started life as the old EX35, then became the EX37 as its engine grew. Eventually, it ended up as the QX50 in Infiniti’s new nomenclature, in which every SUV is a “QX” followed by a number not related to its engine size.

The QX50 never sold in great numbers in the U.S., thanks in part to its very cramped backseat, but that’s been changed for 2016 with a longer wheelbase from a version primarily intended for the Chinese market. The rest of the SUV received only some minor changes; a slightly different front and rear treatment is the most notable alteration. Compare the 2015 and 2016 models here.

With these adjustments, is the Infiniti QX50 sufficiently new to keep it in the luxury SUV game — and can its better interior space draw in new buyers?

Exterior & Styling
The QX50 is not your traditional crossover layout. It’s based on Nissan’s FM rear-wheel-drive platform instead of a front-drive sedan setup, so its proportions look more wagon-like than truck-like.

The 2016 QX50 looks familiar. It hasn’t changed all that much since its introduction, so it doesn’t look much like the current face of Infiniti. Despite the added length for 2016, it doesn’t look longer than the old one unless you park them side by side. The extra length helps the wagon’s proportions, making it look perhaps a little more substantial than the outgoing model. Sleek headlights stretch back to a shapely body that ends in LED taillights — pretty much the norm for the segment.

How It Drives
Powering the QX50 is an updated version of Nissan’s venerable VQ engine, a 3.7-liter V-6 without any turbos or even direct injection. It still manages to produce a more-than-healthy 325 horsepower. That’s more than enough to get the midsize crossover moving at a rapid pace, without any lag that might accompany a turbocharged engine. It’s not hairy or temperamental, just smooth, sonorous power.

The engine is mated to a standard seven-speed automatic transmission, and rear-wheel drive is standard; all-wheel drive is optional. The QX50 is well-tuned for a good mix of athletic handling and a decently comfortable ride. It’s not quite as sharp as some German SUVs, like the BMW X3, but it’s not as ugly as the Lexus NX nor as soft as other Japanese models, like the larger Lexus RX or Acura MDX.

Overall, the QX50 feels balanced and enjoyable: It doesn’t embarrass itself on twisty roads, and it won’t beat you up on broken pavement, thanks to a well-damped ride.

There’s only one engine available for the QX50, and it unfortunately requires premium fuel, which is the norm among luxury models. Fuel economy is only adequate, and it’s the same regardless of whether you choose rear- or all-wheel drive: It’s EPA-rated 17/24/20 mpg city/highway/combined. My week of driving a few hundred miles in the QX50 averaged the rated 20 mpg.

Interior
While the exterior received some minor styling tweaks for 2016, the interior doesn’t seem to have changed since the car’s introduction. This is Infiniti’s old-look interior, and while it’s still pleasant and well-made, it’s definitely dated. The materials are nice, with leather and wood that looks and smells rich. The switches, multimedia system and gauges, however, look old-school.

But they’re not as unusual as the seating position. The more experience one has with the QX50, the more one realizes it feels more like a modified sedan than a purpose-built crossover. You sit high in the car on a seat that feels like it’s out of an SUV, but the steering wheel and controls are low, creating the sensation of driving a bus. It feels like you’re sitting on the QX50, not down in it. Visibility is good thanks to that high position, but it makes seeing stoplights a bit of a challenge, as they’re obscured by the roofline.

The rest of the car feels like it’s merely a wagon, so the odd positioning takes some getting used to. But there’s plenty of room up front, and now there’s adequate room in back, as well, thanks to that extra few inches of length for 2016. It’s not overly spacious, but it’s not uncomfortable anymore, and the tall roof ensures headroom is acceptable, as well.

Ergonomics & Electronics
As mentioned earlier, the QX50 uses the old Nissan/Infiniti-style multimedia system. It works well enough, but it’s definitely not the most advanced system on the market. It has voice commands and supports traffic updates, but the reliability of the voice recognition system needs some work. The upgraded Bose premium audio system is impressive, however, with strong, clear sound.

Safety
The 2016 QX50 does not yet have an overall rating from the National Highway Traffic Safety Administration, but it’s been given a four-star rollover rating (out of five stars), which is common in this class. The 2015 model earned good ratings (out of a possible good, acceptable, marginal or poor) from the Insurance Institute for Highway Safety in all but the small-overlap front test, to which it hasn’t yet been subjected. In the tested categories, it’s on par with competitors in this strong class. As of publication, 2016 results aren’t available, but when they are they’ll appear here.

With the 2016 update, the QX50 offers all the safety systems one would expect in a luxury SUV. Adaptive cruise control with autonomous braking, lane departure warning, lane keep assist and forward collision alert are all newly available, but you’ll likely find yourself shutting them off. The lane keep assist is ridiculously aggressive, and it serves more to annoy you with its beeps and intrusive steering corrections than to keep you safe. See all the QX50’s standard and optional safety systems here.

Value in Its Class
The QX50’s update may not be much more than skin deep, but it’s still a compelling compact luxury SUV. It drives well, looks good and has plenty of content — and it’s a decent value, too, starting at just $35,445 for a rear-wheel-drive model. That price brings you the most powerful standard engine in the class, heated front and rear seats, real leather upholstery and a power moonroof. Step up to the all-wheel-drive model for just $1,400 more. Load up your QX50 with all the technology and luxury packages offered, and you still won’t top $45,000. That’s a heck of a deal for a car this capable and well-equipped.

QX50 competitors tend to cost a lot more and not give you nearly as much standard equipment. The BMW X3 starts at $39,945 with rear-wheel drive, but you don’t get nearly as much stuff at that price. The standard engine has much less power, and you’ll have to pay for almost every extra, right down to another $550 for any paint color other than black or white and $200 for Bluetooth smartphone integration. To option up an X3 with the equipment that comes standard on the QX50 has it topping $46,000 right off the bat.

It’s the same situation over at Mercedes-Benz, where the GLC300 starts at $39,875 but like the BMW comes with a much less powerful turbocharged engine. Mercedes charges you $720-$3,950 for paint colors other than black or white and features imitation leather as its standard upholstery. It charges extra for almost everything. Optioning up a GLC300 to the same level of equipment as a standard QX50 would cost you a minimum of $44,295, as doing so requires adding several option packages.

The Audi Q5 is a little better in that regard; even though it starts at $41,825, it includes Quattro all-wheel drive. Like the other Germans, it has less power than the QX50, but it does come with standard real leather interior, satellite radio, a 10-speaker audio system and bi-xenon headlights. Compare all four competitors here.

Most Comfortable and reliable car we ever owned

May 5, 2021
By LoveOurInfiniti from Marina del Rey, CA
Owns this car

This car has survived two cross country drives in two years. We are in our 70’s so comfort and reliability are king. It gets great marks for comfort....we would probably not have been able to walk after a long drive in our previous vehicle. Two critisims: The rear gate should be electric like 99.9% of other comparable vehicles. Second, we keep dropping stuff in the opening between the seat and the console. There needs to be some kind of covering. Or the console needs to be wider. [Dont mess with the seats; they are great!@]

First SUV I have owned. I was aware that it did not have an inside latch for the trunk/hatch or an automatic button to close.

This is a great car. Excellent pickup & handling with AWD. Extremely reliable and comfortable. My only complaint, and it is a minor one is that the cup holders on the doors are not wide so they can't hold a water bottle. Very roomy inside and my dog loves the view when the back seats are down. This is by far the best car I've ever owned!

All model years for the INFINITI QX50 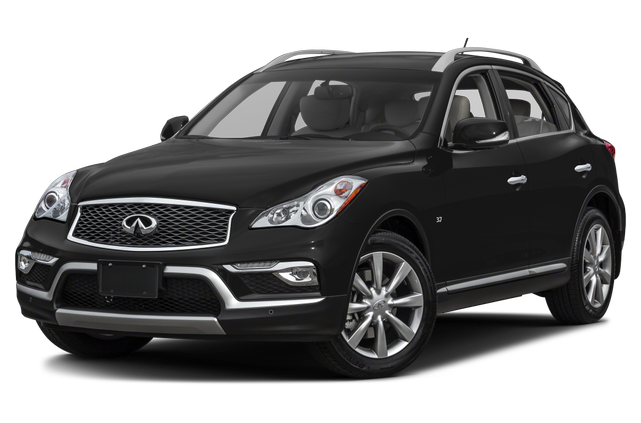 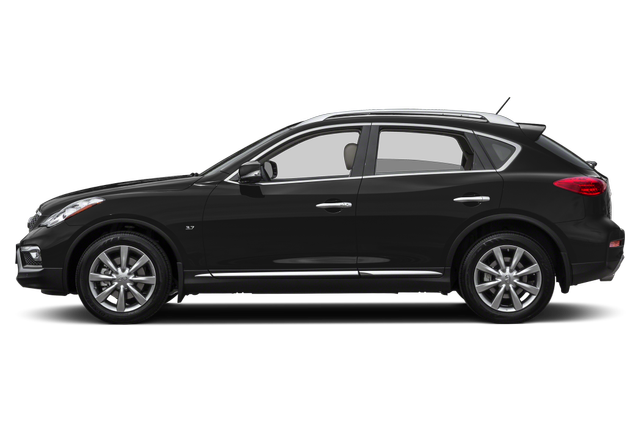 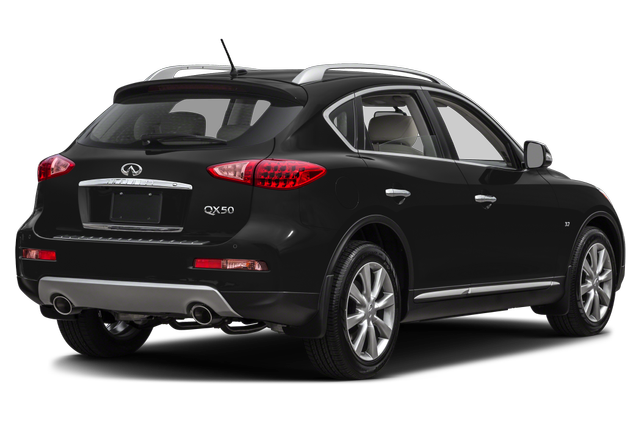 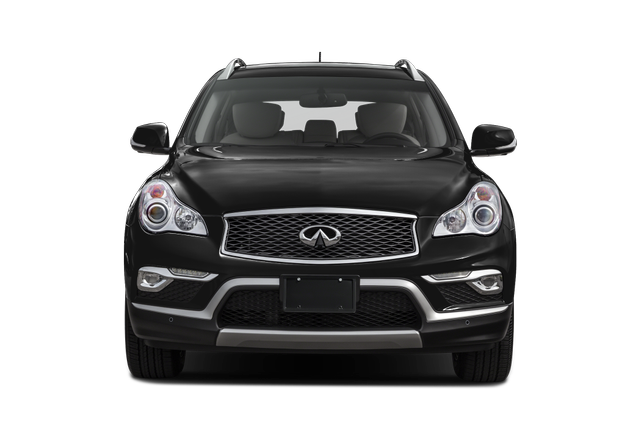 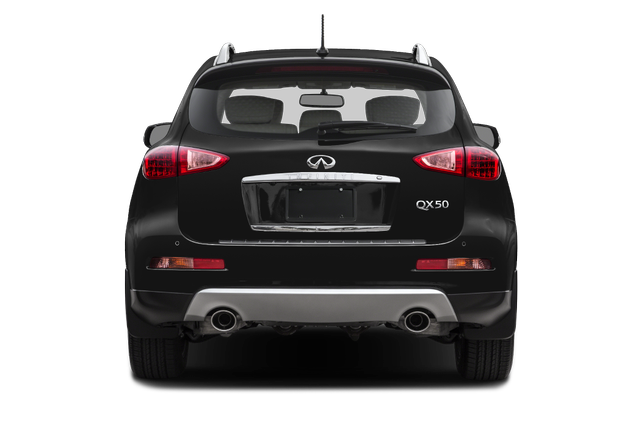 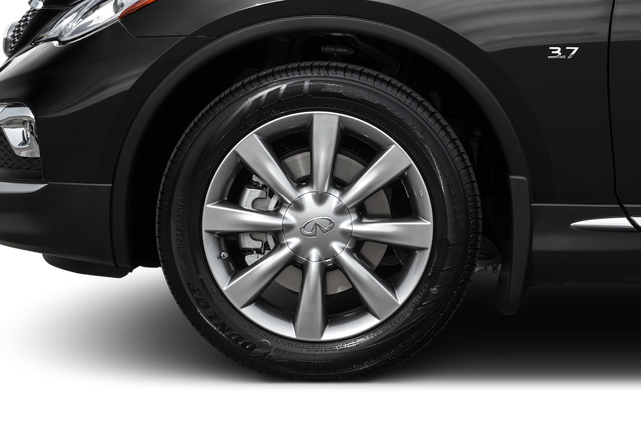 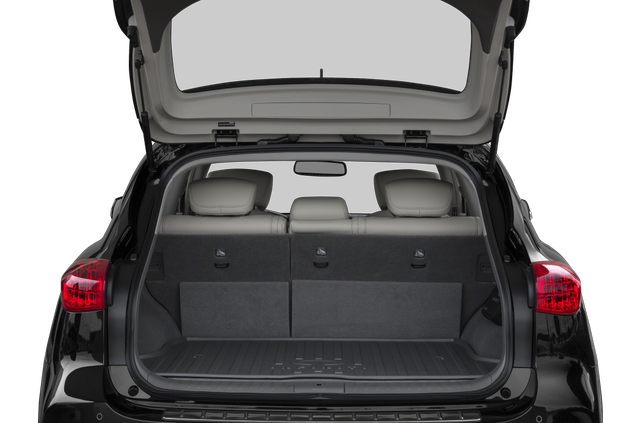 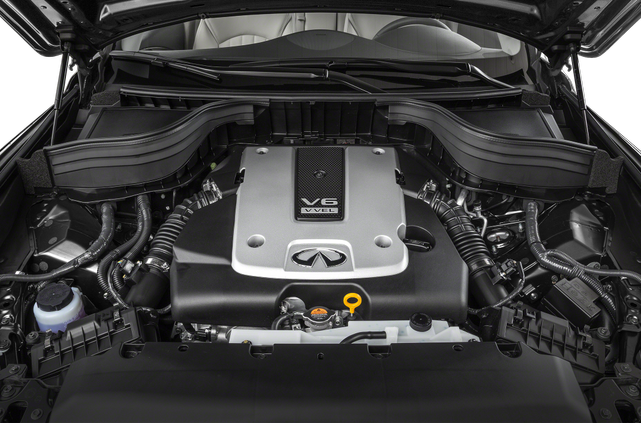 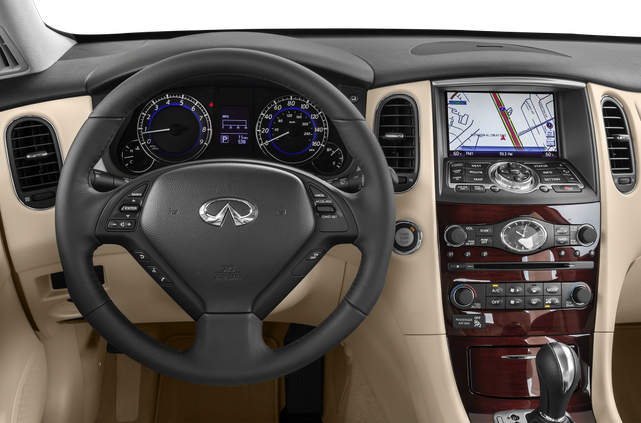 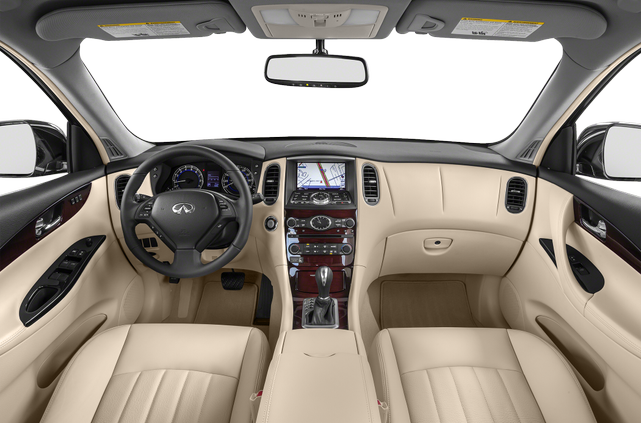 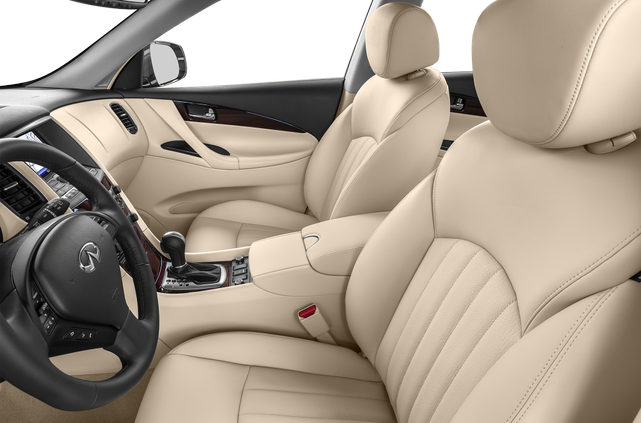 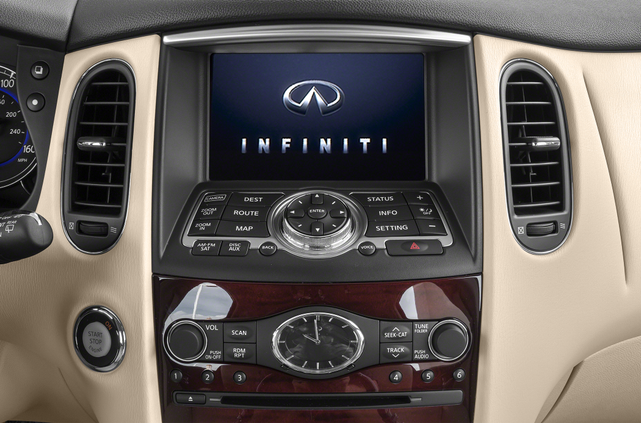 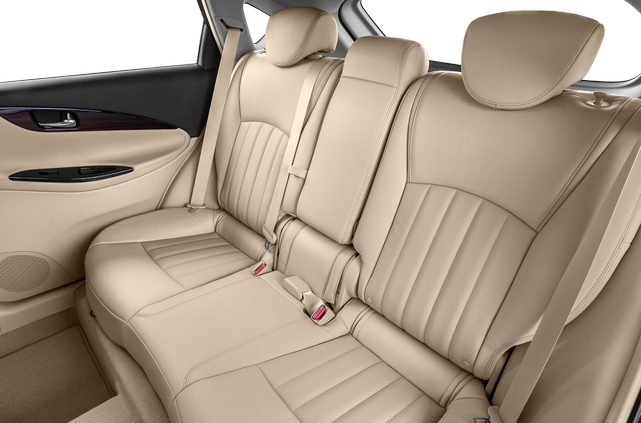 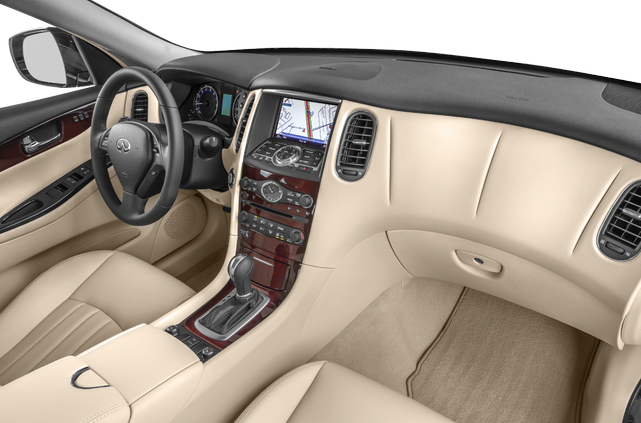 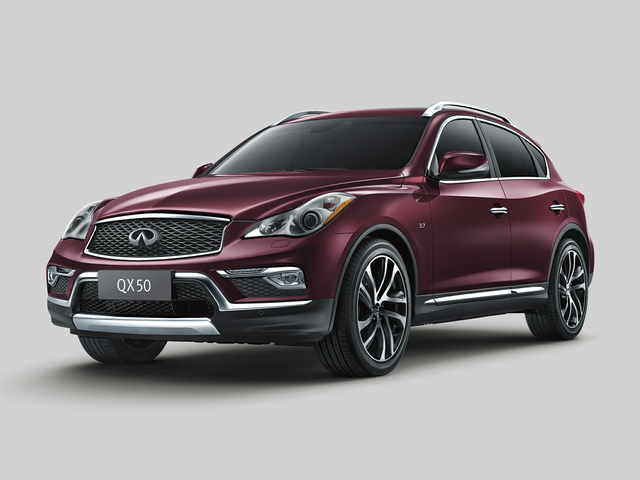 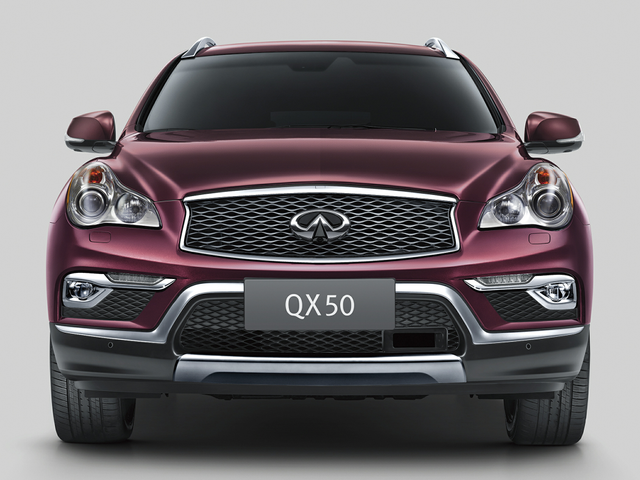 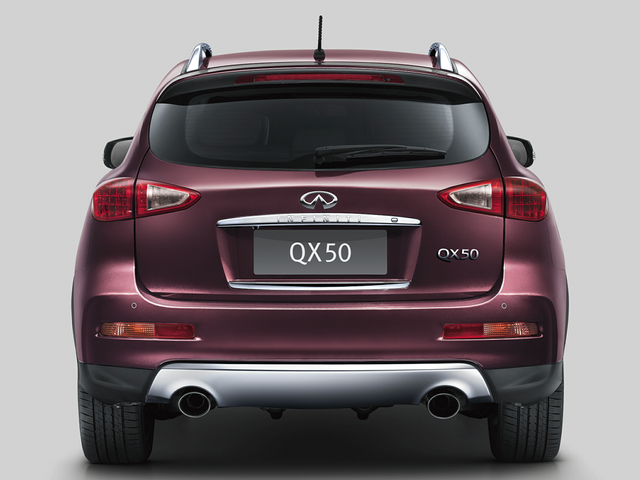 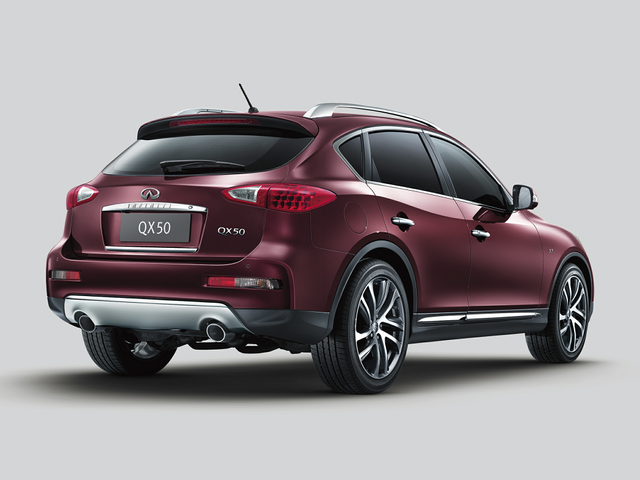 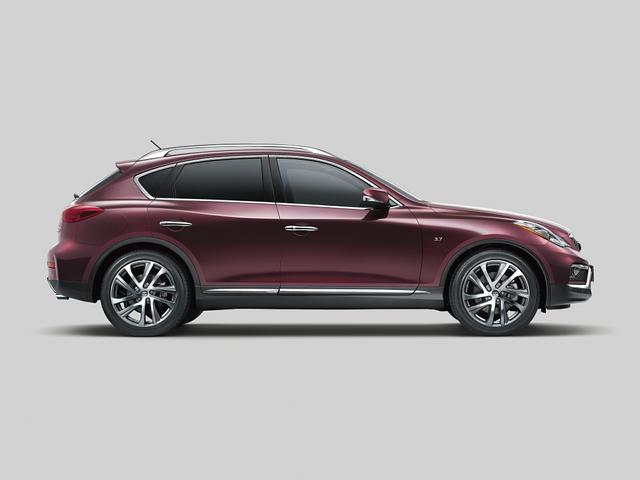 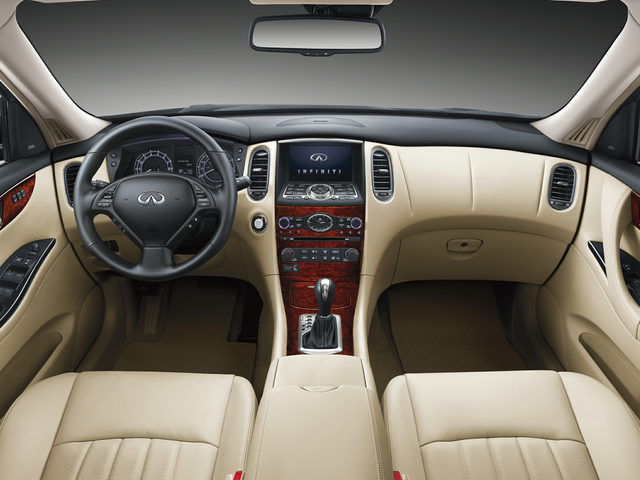