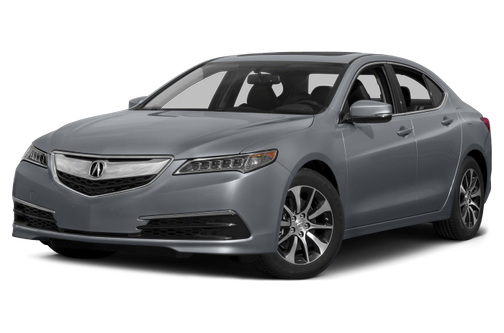 Our 2015 Acura TLX trim comparison will help you decide.

For years, Acura’s TL sedan was a strong seller — until a radical redesign in 2009. The brand has been trying to recover ever since and hopes an all-new version with an all-new name will return it to luxury-sedan success. The TLX replaces both the outgoing TL and the less controversial TSX, which was still an oddball-sized and priced car compared with the current ILX. Compare the TLX with the cars it replaces here.

The 2015 Acura TLX surpasses the TSX and TL it replaces in every way, but it doesn’t take Acura anywhere it hasn’t been before.

The previous TL placed a respectable third out of six luxury sedans in Cars.com’s $46,000 Sport Sedan Challenge. What we recorded as the TL’s weakest areas have mostly been addressed in the TLX — things like a hefty curb weight, the compromised cargo area of the Super-Handling All-Wheel-Drive trim level and an outdated multimedia system.

Exterior & Styling
One thing’s for sure, the TLX is better proportioned than the outgoing TL. Is it groundbreaking? Not really, but at least it’s not awkward anymore. I’d like to see more playful wheel and exterior color options bring out the TLX’s beautifully sculpted rear and great profile curves, which are hard to find in the current color palette. Let’s see a bright blue or striking crimson exterior paired with more daring wheel options, as well as more visual separation between the base and TLX SH-AWD models than fog lights and wheel designs.

More head-turning flavor could help the TLX stand out compared with the aggressive, boldly styled Infiniti Q50. Plus, most luxury sedans have a sport appearance package, like Mercedes-Benz’s AMG appearance package on the 2015 C-Class and BMW’s M Sport appearance add-ons to the 3 Series. An accessory aero kit is available as a dealer-installed option, and it helps the TLX stand out a tad more. Compare the TLX with the Q50, 3 Series and C-Class here.

How It Drives
Perhaps most intriguing is the feisty new direct-injected, 206-horsepower, 2.4-liter four-cylinder engine paired with a new eight-speed dual-clutch automatic transmission that’s included in the entry-level $31,890 TLX (all prices include destination). Weighing 243 pounds less than the previous-generation front-wheel-drive TL V-6, the new four-cylinder doesn’t strain while pulling the TLX, and it does the job with exciting vigor when those revs are above 5,000 rpm. The audible i-VTEC variable valve timing system changes the engine’s tone into a racier experience. Even outside of full throttle there’s a surprising amount of pulling power in the middle of the rev range for a naturally aspirated four-cylinder.

The eight-speed dual-clutch automatic transmission is an important piece of the puzzle, smartly keeping the four-cylinder in its sweet spot so there’s no waiting for power after a gear change. The expected crisp and fast shifts of this type of transmission don’t come at the cost of routine driving (as happens with many dual-clutch transmissions) thanks to the use of a traditional torque converter to provide a smooth start from a stop. The end result is a car the TLX’s chief engineer, Mat Hargett, says is 1.5 seconds faster from zero to 60 mph than the outgoing TSX four-cylinder. Combine that performance with EPA-estimated gas mileage of 24/35/28 mpg city/highway/combined — identical to the most efficient non-hybrid ILX — and it’s an impressive combo. That rating bests the combined rating of the BMW 328i (23/35/27 mpg), though with a lot of acceleration oomph missing compared with the potent BMW turbocharged four-cylinder.

Driving enthusiasts looking for a balanced handling machine should lean toward the four-cylinder over the 290-hp, 3.5-liter V-6 (also direct-injected) with front-wheel drive. The V-6, starting at $36,115, is a potent engine, but front-wheel-drive models don’t feel as well-balanced when driving aggressively on twisty roads compared with the four-cylinder. Without AWD, the V-6 plows into corners and overpowers the front tires with wheelspin. Front-wheel-drive models use Acura’s all-wheel steering system to increase low-speed agility and high-speed stability.

All TLX trims have selectable driving modes of Econ, Normal, Sport and Sport+, which vary power-steering effort, throttle and transmission responsiveness. Sport+ ramps everything up way past everyday driving comfort even with the four-cylinder, aggressively holding the gears. It has such an aggressive effect on the transmission that I didn’t like driving in Sport+ mode for very long.

The optional V-6 comes in two flavors, front- and all-wheel drive, both of which use cylinder deactivation to achieve EPA-rated fuel economy of 25 mpg combined — 21/34/25 mpg for front-wheel drive and 21/31/25 for AWD. Six-cylinder TLXs use a conventional nine-speed automatic transmission — one of only a handful on the market — that’s significantly lighter than the previous generation’s six-speed automatic but doesn’t have the crispness of the four-cylinder’s eight-speed dual-clutch automatic. We’ve also noticed considerable lag when the transmission tries to downshift gears for passing. Did I mention how much I like that eight-speed dual-clutch?

The crisp and responsive V-6 engine is best paired with all-wheel drive, where all usable power is sent to the ground sans wheelspin. Acura uses a next-generation torque vectoring Super-Handling All-Wheel Drive system in the TLX SH-AWD with big results. Not an ordinary AWD system, the TL’s SH-AWD rotates the car around a corner with precision. Redesigned and more compact, the system does so in the TLX with even more aptitude and agility than before, with more aggressive torque vectoring. Even when I didn’t think the car had any more grip, a tug of the wheel dug up some more and the TLX continued to fly through a tight corner. Up to 70 percent of available torque is transferable to the rear wheels for a rear-wheel-drive-like balance, and up to 100 percent of the torque can go to an individual wheel if the system decides that’s the way it’s going to get traction.

The TLX excels in comfort, too, with an extremely quiet interior, spacious front seats and smooth ride quality. The TLX manages to ride docilely on rough roads, but it’s rewarding when those roads curve — even though the car lacks an electronically adjustable suspension. The roughest pavement and torn-up roads couldn’t upset the TLX’s refined interior experience.

Interior
Overall, the interior is … well, very Acura-like, meaning it’s nicer than a midsize sedan like the Honda Accord, but still a long way from being a defined luxury experience. The TLX is trying to bridge the gap between two cars with prices ranging from $31,890 for a base 2.4-liter to $45,595 for a loaded SH-AWD, whereas directly competing luxury cars already start in the upper-$30,000 range. There are nice materials with a tech-savvy style, though nothing oozes style or opulence like the new 2015 Mercedes-Benz C-Class ($39,325) or BMW 328i ($38,350). The experience is more appropriate for the lower end of the TLX’s range and still far from offering the richness of the C-Class, BMW 3 Series or Infiniti Q50 sedan once prices start climbing.

“Zebra” wood-finished trim on the center console and doors is dull and plastic-like, and the silver alloy accents around the media system, while nicely sculpted, don’t stand out in any particular way. The front seats are comfortable and have enough bolster support to keep you planted during spirited maneuvers. Genuine leather seats with Milano leather bolsters replace standard leatherette (imitation leather) upholstery when you opt for the Technology Package. In the backseat, there’s equal amounts of comfort, though a pesky elevated center seat cushion hump and floor hump remain from the TL.

Ergonomics & Electronics
The Acura TLX’s dual-screen multimedia system hosts numerous connectivity features but is a bit overwhelming to navigate at first, with the split usability of a touch-screen and a center control knob (most luxury cars use one or the other). The interface is a considerably simplified visual experience, however, compared with the button-heavy spaceship command center of the previous TL.

Standard multimedia features include the Siri Eyes Free interface, satellite radio, Pandora and Aha internet radio compatibility, USB input with iPod integration, Bluetooth streaming audio and more. Those sound like pretty standard features, but good luck finding a USB port in an entry-level Audi A4 or satellite radio in a bare-bones BMW 3 Series. The Technology Package adds navigation, a premium sound system, leather sport seats (leatherette is standard), lane departure warning, lane keep assist, forward collision warning, cross-traffic alert and more. A 2.4-liter with Technology Package is $35,920, while the 3.5-liter with Technology Package is $40,145. TLX SH-AWD models are a little pricier for 2015 as they all now include the Technology Package as part of their $42,345 price.

Cargo & Storage
No longer are those who choose all-wheel drive penalized with less cargo volume than front-wheel-drive models as they were with the TL. A more compact AWD system means all models now have 13.2 cubic feet of cargo space. The TLX’s trunk size is in line with the Q50’s 13.5 cubic feet, the 3 Series’ 13.0 cubic feet and the C-Class’ 12.6 cubic feet. The Acura TLX features a 60/40-split folding backseat on all models. An optional underfloor cargo management system boosts usable cargo space to 14.3 cubic feet.

Safety
Crash-test organizations had not tested the TLX at the time of publication. Numerous driver assistance technologies are available in addition to the standard safety features of front, side-impact, side curtain and driver’s knee airbags, plus a backup camera with predictive guidelines.

Six-cylinder TLXs can be equipped with collision mitigation braking and road departure mitigation in the Advance Package that sense pending collisions and lane departures and autonomously intervene with braking and steering action, respectively. Safety technology available on both four- and six-cylinder TLXs include the advanced features that come in the Technology Package. See here for more safety features.

Value in Its Class
Acura succeeded in replacing the TL and TSX with the single TLX. The four-cylinder TLX is a considerably more refined experience than the TSX, and the V-6 model is a proper successor to the TL without being degraded by the addition of a base four-cylinder. In fact, I preferred driving the well-rounded TLX four-cylinder to the TLX six-cylinder with front-wheel drive.

The TLX’s approach is far from daring, however, and the TLX fits in the luxury segment in about the same place as the previous TL. An entry-level price of $31,890 gives the TLX a value-oriented spin, given it’s priced far below the starting cost of a comparable BMW, Mercedes or Infiniti. That big of a disparity is mirrored in the TLX’s value-oriented interior, which doesn’t scream “luxurious” in the way other luxury competitors do — even though the TLX has the high-tech features to match.

Very reliable doesn’t require much maintenance as long as you keep up with the bare minimum such as the oil changes. I fell in love with the chocolate interior hence why I purchased the car. Would highly recommend that you buy.

September 3, 2020
By FunPG from Inglewood
Owns this car

This Car is so luxurious.The drive is so smooth.A big difference from what I had before especially being a sports car.Very stable on the road

July 21, 2020
By Happy Acura owner from MALDEN
Owns this car

Very clean and spacious car..the highway drive was so smooth, I'm so happy I brought it..perfect space for myself and my 6"4 15 yr old grandson

Rating breakdown (out of 5):
0 people out of 0 found this review helpful. Did you?
Show full review
See all 125 consumer reviews

All model years for the Acura TLX