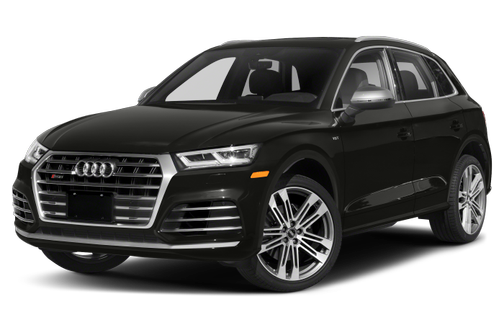 Our 2018 Audi SQ5 trim comparison will help you decide.

The verdict: Like that ever-so-versatile wardrobe must-have, the Little Black Dress, the 2018 Audi SQ5 is both elegant and everyday, sporty and stylish — though its price is too couture for my closet.

Versus the competiton: The SQ5 combines utility, luxury and excitement more deftly than others, and although its price is high in the Q5 lineup, it’s more affordable than its luxury performance SUV rivals.

The SQ5 is the performance-oriented version of Audi’s Q5 SUV; both models were redesigned for 2018 with additional room and updated powertrains. The Q5 competes against the likes of the BMW X3, Porsche Macan and Mercedes-Benz GLC (compare them). The SQ5’s main competitors are the Mercedes-AMG GLC43 and Porsche Macan GTS (compare them).

The SQ5’s rounded curves and stately face are polished but hardly exciting; the thrill comes from under the hood. The car vaults off the line and stays strong after just a trace of turbo lag. The turbocharged 3.0-liter V-6 is good for 354 horsepower and 369 pounds-feet of torque — a bit more torque than the previous SQ5’s supercharged V-6. Standard Q5 models use a 2.0-liter four-cylinder that’s good for 252 hp; the new Q5’s four-cylinder pairs with a seven-speed dual-clutch automatic transmission while the SQ5 gets an eight-speed automatic. Audi’s Quattro all-wheel-drive system is standard.

The Audi SQ5 powertrain’s thrust is lively, but its sound is exhilarating. It thunders to life like the opening bars of the Imperial March — both ominous and thrilling — and Dynamic mode adds even more snarky, burly bark. Four driver-selectable modes alter the SUV’s driving characteristics: Comfort, Auto, Dynamic and Individual. The modes change the accelerator response, transmission shift points, ride height, suspension firmness and steering effort to customize the SQ5’s driving dynamics along the spectrum of sport and comfort. Auto is the default setting, and Individual can be programmed by the driver.

Overall, ride quality is firm but not punishing. The optional air suspension adjusts vehicle height as well as the firmness of the shock absorbers. The Audi SQ5 comes alive in Dynamic mode with firm, connected steering and sporty handling. The accelerator’s hair trigger delivered more responsiveness for quicker pep off the line, and the ride felt much firmer — even choppy at times. Comfort mode takes the edge off; there’s a decent amount of cushioning, but the steering lightens up and handling loses some of its crispness.

Writing occupies a nice, cushy couch within my brain’s comfort zone, while math transforms it into a waterboarding table. Coincidentally, that’s also what’s happened when I’ve tried in the past to use Audi’s MMI multimedia system — it was more painful than high school calculus. The Audi SQ5 uses the most recent version of the system and, though it’s more straightforward than previous generations, it’s still a long way from simple. Its learning curve is steep, and for me it required studying the owner’s manual and watching a YouTube tutorial to figure out. Even after that, some of the system’s more nuanced layers — swipe left for this, tap here for that — still eluded me and will likely take owners a lot of practice to master.

In the plus column, the tabletlike screen sits high on the dash for good visibility and has crisp, modern graphics — I especially appreciated the navigation’s realistic Google Earth satellite view. However, it’s not a touchscreen, so the driver’s focus must shift down to a console-area knob and trackpad to control different parts of the system, from audio to navigation. (Thankfully, the climate buttons are separate and straightforward.) Using the knob for things like inputting an address into the navigation system is obnoxious and time-consuming. It also makes Apple Car Play and Android Auto operation clunkier.

The system earns points for its volume knob, but it’s too far away from the driver and requires an awkward stretch. And the oddness continues: To use the knob as a tuner, you have to bump it like a joystick rather than twisting it. More oddness: The system’s trackpad takes up a lot of real estate on the center console for not a lot of functionality. It houses the audio preset numbers, but its main role is to function as a writing pad — you “write” a letter with your finger to call up a destination in the nav system. Overall it feels gimmicky and is more time-consuming than using a touchscreen system; also, lefties will have even more trouble with the right-hand placement of the pad.

On the whole, MMI is better than before but has a long way to go in terms of functionality when compared with the industry’s best systems, like touchscreen executions from Chrysler and Volvo.

A couple of things stood out about our SQ5’s cabin — for better and for worse. First, we must address the lipstick-bedecked elephant in the room: the Magma Red interior. The lavish, quilted-leather seats and tasteful Carbon Atlas inlays convey elegance, but it’s smothered by a big bucket of bright Magma Red. Like a well-placed lipstick, that kind of red should be a tasteful pop that adds some jazz to an otherwise ho-hum look. In the SQ5, it’s everywhere, taking the cabin’s finishes from understated to garish. Thankfully, other color palettes are available — like black.

In other ways, the SQ5’s interior is the picture of a luxury SUV. Cabin craftsmanship and materials quality are top-notch, like the plush padding and detailed stitching on the doors and console.

The bolstered rear seats are comfortable, and they slide and recline for added flexibility. By the numbers, the Audi SQ5’s backseat offers slightly less headroom than the GLC but slightly more legroom. (Porsche has not published backseat specs for the Macan.) Two adults will be comfortable in back, and I managed to squeeze my three kids and their car seats back there without much drama. My toddler twins’ forward-facing convertible car seats went in without a problem thanks to the SQ5’s exposed lower Latch anchors, and I fit my second-grader’s compact, inflatable booster in the middle. A traditional booster would not fit. I had a tough time installing a rear-facing infant seat during our Car Seat Check due to inadequate legroom.

Behind the backseat, there’s 26.8 cubic feet of cargo space, more than the GLC43 (19.4 cubic feet) and Macan (17.7 cubic feet). Fold the seats to create 60.4 cubic feet of space — again, more than the others. I fit a full grocery run in the cargo area (with the seats in place) and found the adjustable suspension’s lower loading height useful when loading and unloading bags. The cargo wall’s small netted bins were also handy for corralling fragile groceries (like bottles of wine).

The 2018 Audi SQ5 had not yet been tested by the Insurance Institute for Highway Safety or the National Highway Traffic Safety Administration as of publication.

The 2018 SQ5 starts at $55,275 including destination, about $1,000 more than the 2017 version and $12,800 more than the regular Q5. The version I tested clocked in at $68,750 after extras like those quilted Nappa leather seats, an adaptive suspension, 21-inch wheels, navigation and a premium sound system, among other features. That sounds steep, but competitors start even higher: The AMG GLC43 starts at $57,245 and the Macan GTS at $69,950 (all prices include destination charges).

The SQ5 appeals in its balance of a classy, elegant vehicle with a fun factor in a way that few in the class manage as astutely. Its engaging road manners add an air of excitement to the everyday personality of the Q5, but Audi is overreaching with the SQ5’s designer-label price premium.

This Vehicle checks all the boxes

December 5, 2020
By RadMav from GARDEN GROVE, CA
Owns this car

Before purchasing this car we test drove every SUV we could find 3 Land Rovers, 2 Jags, 2 Mercedes, 2 Volvos, the Q3, Q5, Porsche Macan, Infiniti, Lexus, Tesla, and one or two others I am missing. My wife is not a car person but she was adamant she wanted the SQ5. It is phenomenal how this car can go from extremely comfortable, to Visceral and Exciting by simply putting it Dynamic and Sport Manual. Our friends find the acceleration surprising and they are shocked by the growl and exhaust burble when you manually downshift through the gears. The Nappa leather seats are incredibly comfortable, the normal ride is on par with some of the best luxury sedans around. It is a pretty heavy car but that only becomes apparent during aggressive driving through the twisting curves. It has a very strong tendency to understeer. Power and acceleration are excellent and it cruises at or above freeway speeds effortlessly. The entertainment system is my only complaint because it has too many levels there sis not a simple intuitive flow to select the things you want easily and sometimes it gets confused which phone to connect when we get in with two paired phones. Our lease is up and we are looking at a 2021 with the new styling and interior updates. the touch screen update to the entertainment system are hopefully much more intuitive.

Outstanding! Just brakes are a bit expensive! Ouch! There is not much else I can say! It’s the 3rd in a row I’ve owned and with pleadure

All model years for the Audi SQ5