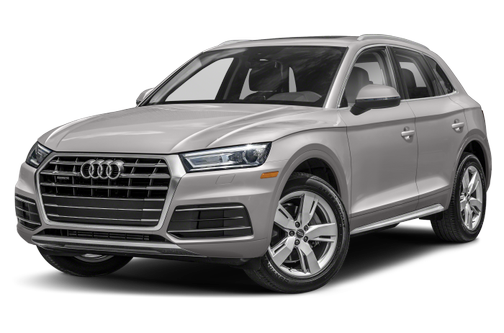 Our 2018 Audi Q5 trim comparison will help you decide.

Versus the competiton: While it’s a little pricier than most direct competitors, its luxurious appointments, high-tech cockpit and plentiful room make the Audi Q5 stand out.

The second generation of Audi’s mid-size SUV has arrived just in time to capitalize on the exploding popularity of the vehicle’s compact SUV class. Competition has only gotten stiffer, but buyers have become more numerous, so Audi’s timing couldn’t be better to drop this redesigned 2018 Q5 onto our streets.

The new Q5 is a little longer, a little taller and a little bigger inside than the SUV it replaces (compare the 2017 and 2018 models here), and it features a new interior, more technology and simplified choices of drivetrains, as well. The performance-oriented SQ5, which was also redesigned for 2018, is covered separately.

The last Q5 was a competent, well-executed luxury crossover with a few quirks, including a sluggish transmission. Has Audi improved the breed with this new model?

It Looks the Business

Love it or hate it, Audi’s styling is certainly consistent. Even an all-new model like the Q5 looks similar enough to the outgoing model that you might not know on sight which is newer. The Audi Q5 keeps to the program with its shield grille, swept-back smooth sides and family taillights. There is, however, something new for 2018: The hood’s cutline continues into the fenders, giving it a more seamless appearance. It’s attractive and immediately identifiable as an Audi.

Last year’s optional, supercharged 3.0-liter V-6 is gone. The new Q5 is powered by a single engine choice: a turbocharged 2.0-liter four-cylinder engine that pumps out a healthy 252 horsepower.

It’s mated to a new seven-speed, dual-clutch automatic transmission instead of the last model’s traditional eight-speed automatic. The dual-clutch transmission routes power to the Audi Q5’s standard Quattro all-wheel drive. The engine provides plenty of power across the rev range, with lots of grunt from both a standing stop and while flying at highway speeds. The transmission shifts quickly and smoothly, with none of the odd hesitation reported from the six-speed in the previous model. On a couple of occasions, however, it did strangely cut power to the engine under some specific circumstances — nothing I could replicate reliably, but an odd sign of something not quite right with either the engine control or the transmission programming.

The Q5 also exhibited some unusual behavior when coming to a stop. The transmission didn’t seem to disengage properly, causing the engine to stutter and feel as if it were about to shut off as part of the SUV’s automatic stop-start function — even though that function was deactivated (which can be accomplished by pushing a button on the dash). These unusual performance gremlins weren’t enough to warrant a trip to the dealer, but they did make me wonder if the SUV was supposed to be behaving like this or if there was something wrong with my vehicle.

The rest of the Q5’s performance is admirable. It’s quiet, smooth, rides well and provides confident, neutral handling in most situations. Push the button to switch into Audi Drive Select’s Sport mode and throttle response gets faster, steering resistance goes up and the Audi Q5 gets a lot more entertaining. Or, for a relaxing experience guaranteed to please passengers, keep it in Comfort. The only issue I had with handling is that the steering’s return-to-center isn’t very good. It holds a corner line all too well — even beyond when you want to drive straight again, necessitating a manual adjustment when an automatic one would normally occur. It’s quirky and doesn’t happen all the time, but it’s oddly noticeable when it does.

Fuel economy is very good compared with the Q5’s competitors. The EPA rates the new Q5 at 23/27/25 mpg city/highway/combined, which is 3 mpg higher than the outgoing model in the city and combined. The all-wheel-drive Acura RDX achieves a rating of only 19/27/22 mpg from its standard 3.5-liter V-6, while the turbocharged 2.0-liter four-cylinder engines in both the Lexus NX 200t and AWD Lincoln MKC are rated 22/28/24 mpg and 19/25/21 mpg, respectively.

Sadly, Audi no longer offers a diesel engine in the Q5 in the U.S. due to its emissions-cheating scandal, so if you want better fuel economy, you’ll have to opt for the Lexus NX 300h hybrid, which is rated 33/30/31 mpg. The Q5 hybrid was discontinued after 2016 and there’s no word of a replacement.

Inside, Nobody Does It Better

The continued superiority of Audi’s interior quality and design is solidly represented here, with the updated cabin of the 2018 Q5 coming in at the top of the class. Excellent materials, solid-feeling switches, logical layouts, and comfortable seats with plenty of room for passengers all make for an impressive place to be. Visibility is excellent in every direction thanks to a high seating position and low beltline. Front occupants have plenty of headroom and legroom, and a slight increase in the wheelbase for 2018 seems to have improved backseat roominess, as well — no longer does it feel cramped.

Notable for its appearance in the Q5 this year is Audi’s Virtual Cockpit, seen previously on other models in the Audi lineup. An option included in the Navigation Package, it replaces the traditional gauges with a full digital display behind the steering wheel, allowing for visual customization and duplication of items seen on the dashboard’s central display screen.

The multimedia system has been redone, but it’s no improvement over how Audi used to do things. The old Multi Media Interface was super-intuitive, not even requiring you to look at the buttons as you navigated on screen. The new one features a large touchpad in front of the various knobs and buttons. It’s reportedly for handwriting recognition, but I didn’t use it once. Apple CarPlay works well, however, despite needing to use the rotary selector knob to make it work. The changes to Audi MMI sadly encourage one to use Apple CarPlay or Android Auto instead, but these systems are optimized for use with a touchscreen, which the Q5 doesn’t offer.

Plenty of Room for Stuff

More important, perhaps, is how the Q5 stacks up cargo-wise to the Audi A4 Allroad wagon, given the vehicles are similarly sized and have similar missions. The Q5 edges out the Allroad, which has 24.2 cubic feet of cargo room behind the backseat and 58.5 with it folded, proving the Audi Q5 is more than just a lifted A4 wagon.

As of publication, the 2018 Audi Q5 had not been crash-tested by the National Highway Traffic Safety Administration or the Insurance Institute for Highway Safety. Due to its redesign, the 2017 model ratings don’t apply. If the 2018 is tested, its results will appear on this page.

The Q5 continues to offer all the latest safety features, most of them optional or included in higher trim packages. Audi Pre-Sense Basic is standard but is more of a “crash preparation” system, closing the windows and moonroof, tightening safety belts, etc. Pre-Sense City is Audi’s object-detection and autonomous braking system, providing full braking up to 52 mph. Other systems, like blind spot warning, lane departure prevention with lane centering, adaptive cruise control with stop and go, turn assist, and rear cross-traffic alert are also available.

The new Q5 starts at $42,475, including destination, for a base Premium trim. There are levels above this, which Audi treats as option packages: the Premium Plus, which I tested, and the Prestige. The Premium Plus Package costs another $4,000 and adds LED headlights, stainless steel trim, a panoramic moonroof, heated auto-folding mirrors and heated seats. Add navigation, 20-inch wheels, Bang & Olufsen premium audio, a cold weather package and special Florett Silver paint, and you get to our as-tested price of $52,700.

The Audi Q5 starts at a higher price than competing vehicles like the Acura RDX, Lincoln MKC and Lexus NX 200t. All those vehicles start thousands of dollars less but end up costing about the same when you option them up equally — or at least as equally as possible, considering the Audi features some things competitors simply don’t offer, like Virtual Cockpit display, an optional full-color head-up display and more.

The Audi Q5 is also nicer inside than any of its aforementioned competitors. It’s truly challenged only by the Mercedes-Benz GLC, which is even more expensive and sits on a rear-wheel-drive platform.

It's great the ride is very quiet and comfortable, smooth and it will get you a speeding ticket. Audi has a great warranty on their vehicles.

This car has so many features and rides awesome. It handles great and is very comfortable. I highly recommend this vehicle to anyone who is considering it.

best car in the line of crossovers

January 7, 2021
By Alex from Gainesville, VA
Owns this car

Rating breakdown (out of 5):
0 people out of 0 found this review helpful. Did you?
Show full review
See all 178 consumer reviews

All model years for the Audi Q5