Our 2021 BMW M3 trim comparison will help you decide.

The verdict: Even more capable than before, the new M3 is a supercar disguised as a sedan — but it’s the disguise itself that might just be a deal breaker.

Versus the competition: The M3’s adjustability sets it apart from competitors like the Mercedes-AMG C63 and the Alfa Romeo Giulia Quadrifoglio; it can be a calm around-town cruiser or the ultimate track monster with the push of a few buttons.

The BMW M3 is one of those iconic sports machines that creates strong feelings among enthusiasts. Is the new one as good as the old one? Can all its technology make up for the extra weight it lugs around? Has it become too expensive, too unattainable, too electronic?

There’s plenty of debate in the car-enthusiast world, but something that hasn’t generally been an issue for the BMW M3 before is its looks — until now: Is it too ugly to be seriously considered? We don’t normally discuss how a vehicle looks, as taste in design is largely subjective; one person’s hideous is another person’s appealing. But if our anecdotal discussions with current M3 sedan and M4 coupe owners are any indication, the M3’s new styling may just impact its viability for a lot of buyers. Can the M3’s performance and other abilities overcome its questionable looks?

The Beav — Uh, Elephant in the Room

OK, we should just get this out of the way: BMW’s new buck-toothed styling is awful. This is a worse transgression than the “Bangle butt” of the 2002 BMW 7 Series. The best anyone seems able to muster about the odd grille treatment is, “It doesn’t look too bad.” That’s a damned far cry from “Wow, that’s gorgeous.”

But it isn’t just the grille that’s offensive. Look down the M3’s body side and you’ll notice the fenders have been flared to cover its wider wheels and tires. Then you’ll notice the door skins have not been widened to match the fenders, which becomes awkward where the rear doors meet the rear quarter panels. This is BMW cheapening out on the upgrade from 3 Series to M3 by not also modifying the door skins in order to save a couple bucks. The result looks half-done and amateurish — a decidedly disappointing visual update that takes away a significant portion of the M3’s appeal. 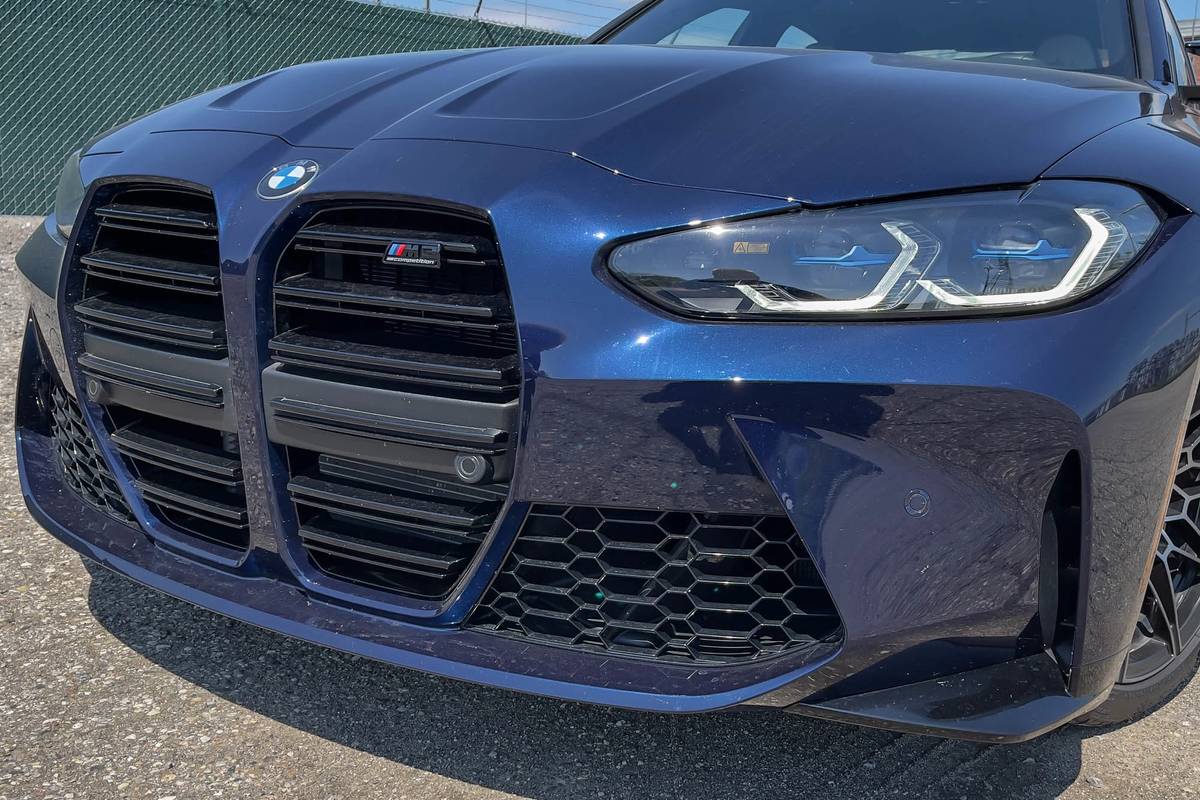 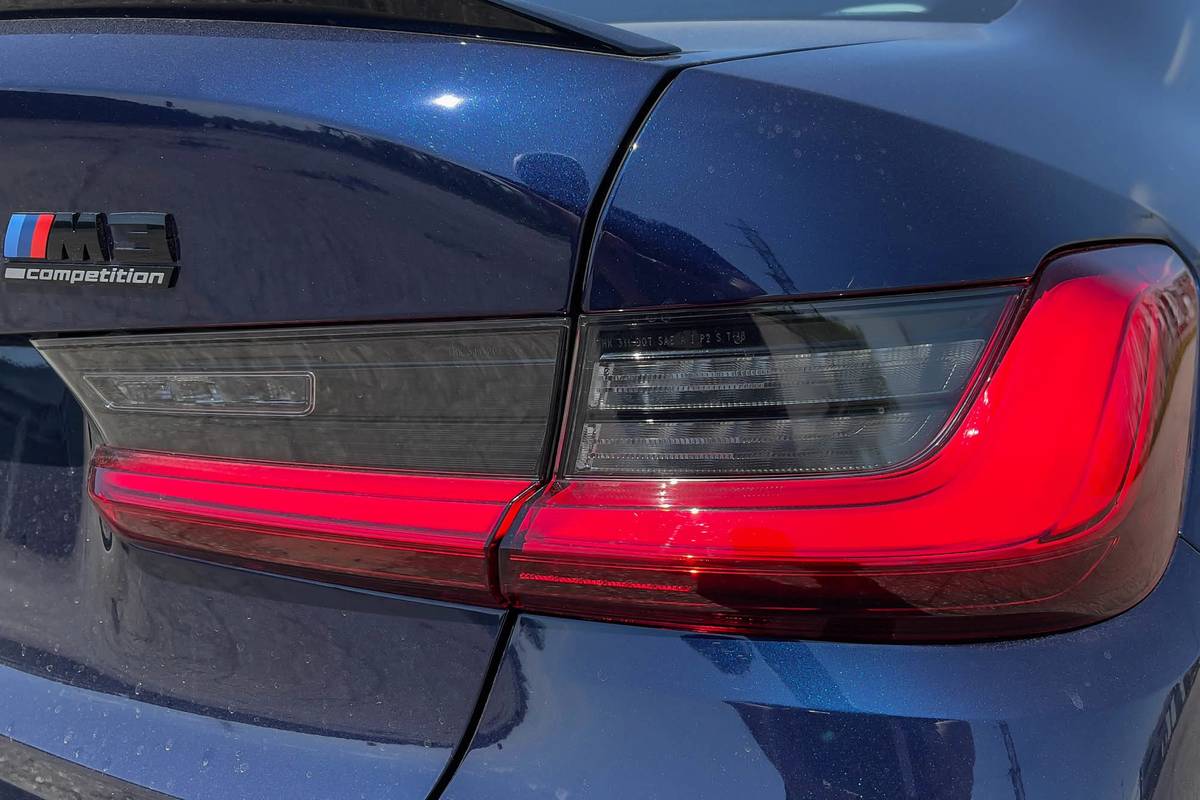 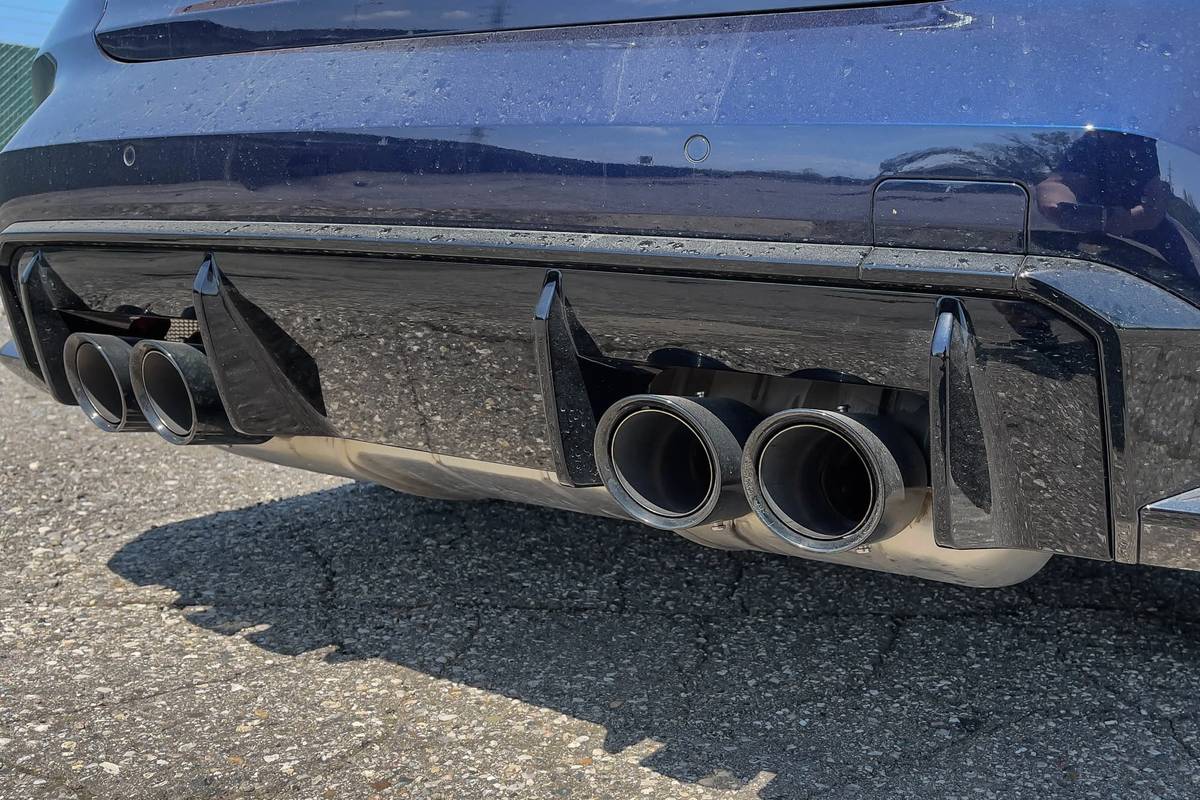 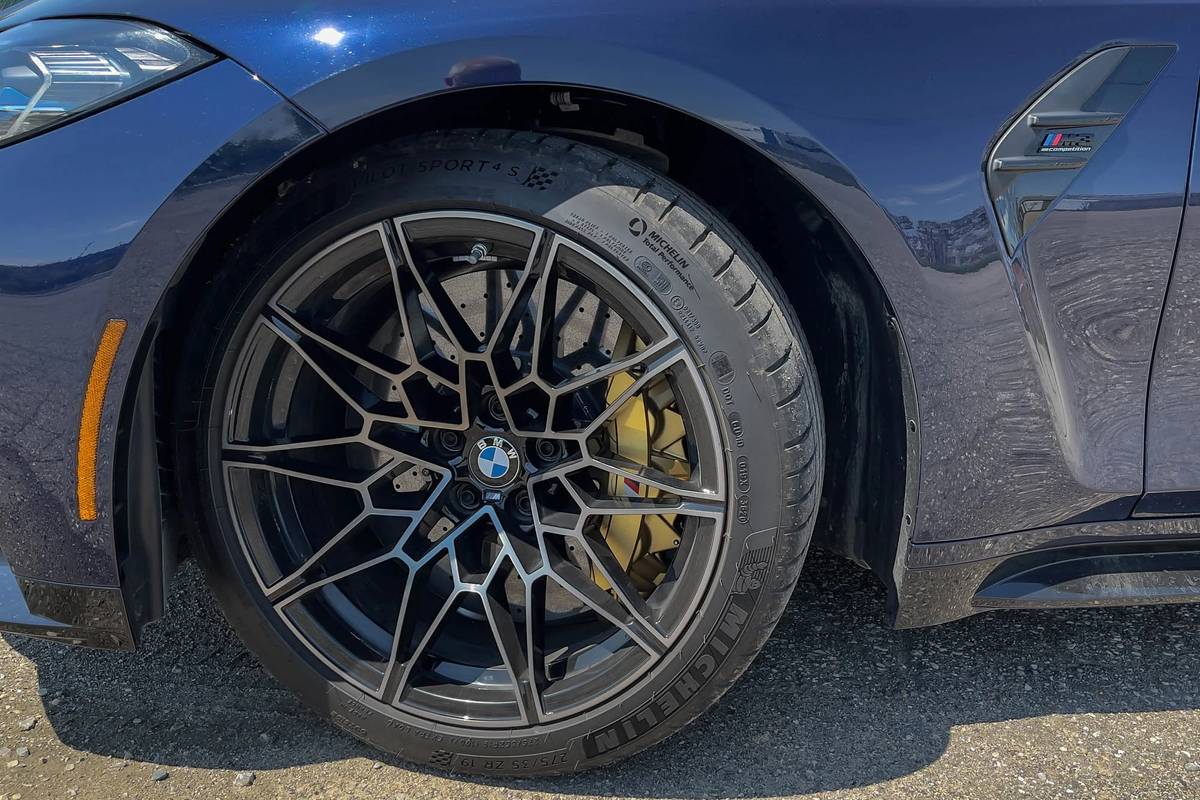 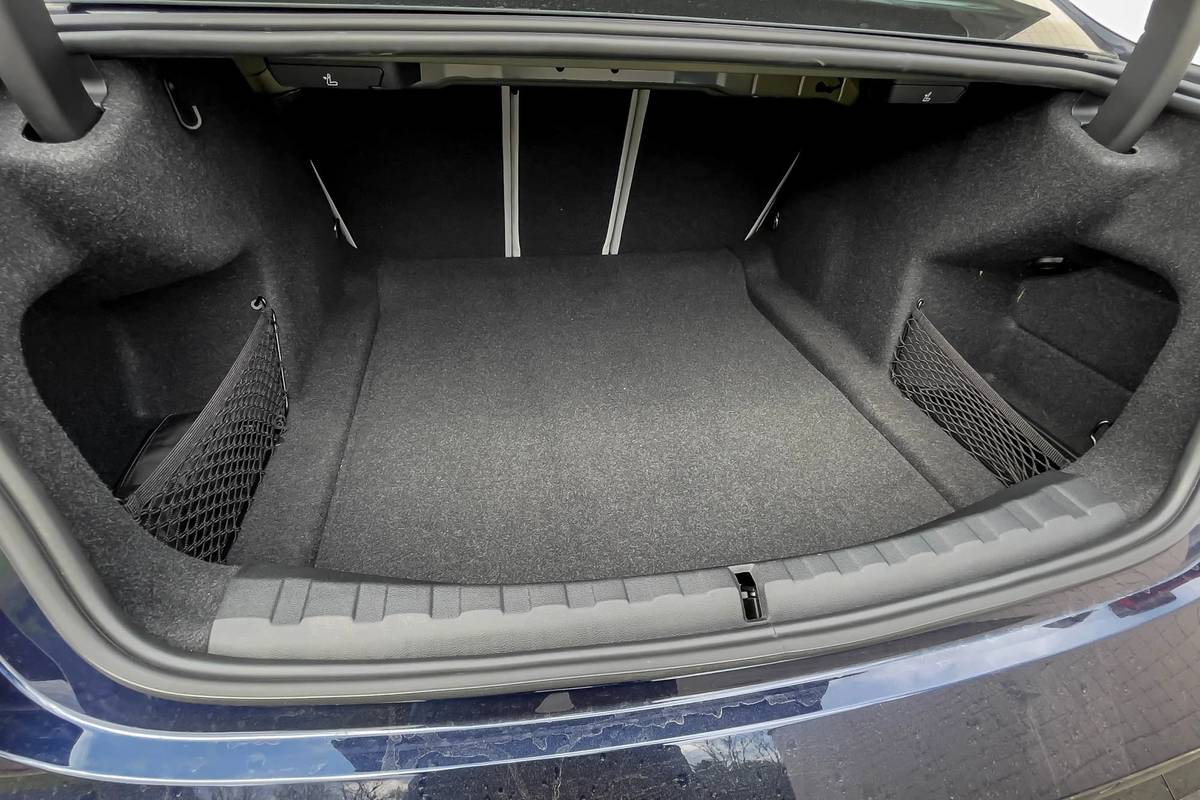 A good friend of mine owned a 2015 M4 coupe and was thinking of replacing it with this latest-generation M3/M4, but as he put it, “To spend as much as they want for the new car, I have to love it. And looking at it … I just don’t love it.” One wonders how many other longtime BMW owners will look at this latest generation of M3 and make the same choice to not re-up their membership in the Bimmer club.

If You Can Get Past the Looks …

The driver’s seat is where the new M3 makes its strongest case for overlooking the fact that it looks like the lovechild of SpongeBob SquarePants and a garden vole. And that case is indeed strong; the M3 drives as well as it ever has, with abilities unmatched by plenty of super-expensive ultra-sports-cars — all while disguising itself as a compact sports sedan. 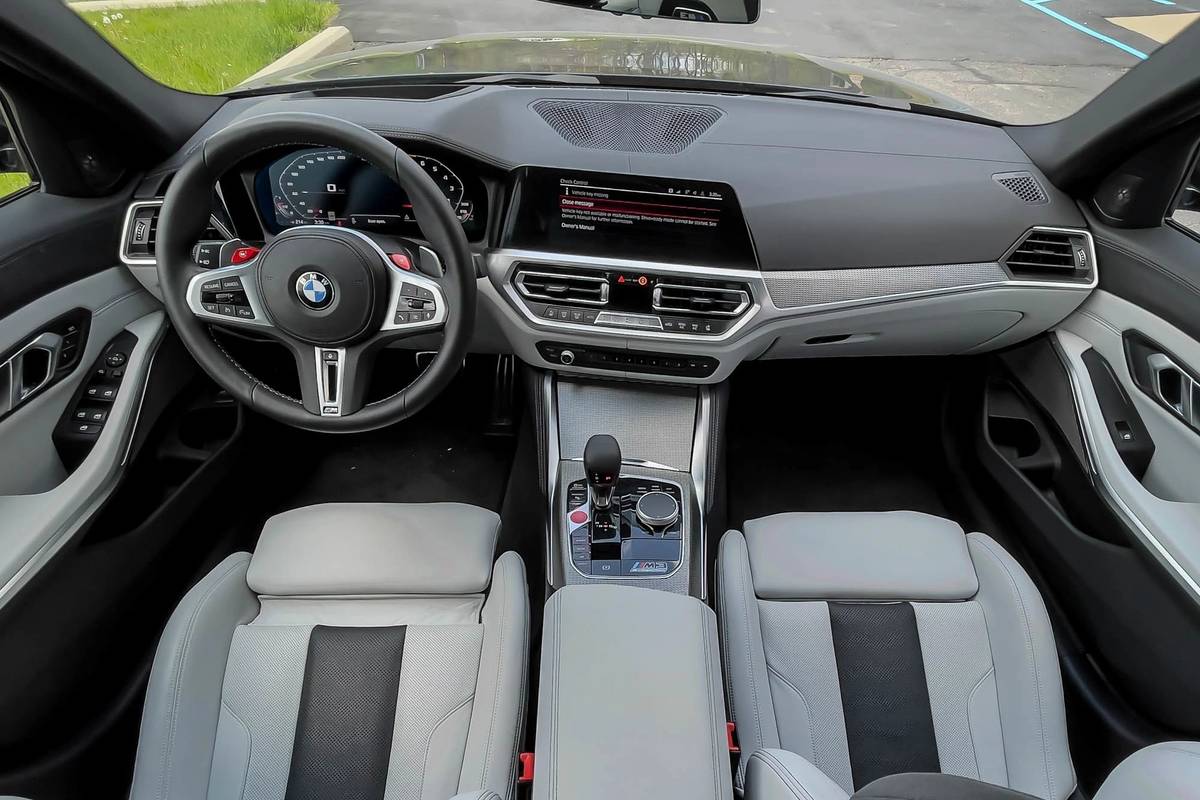 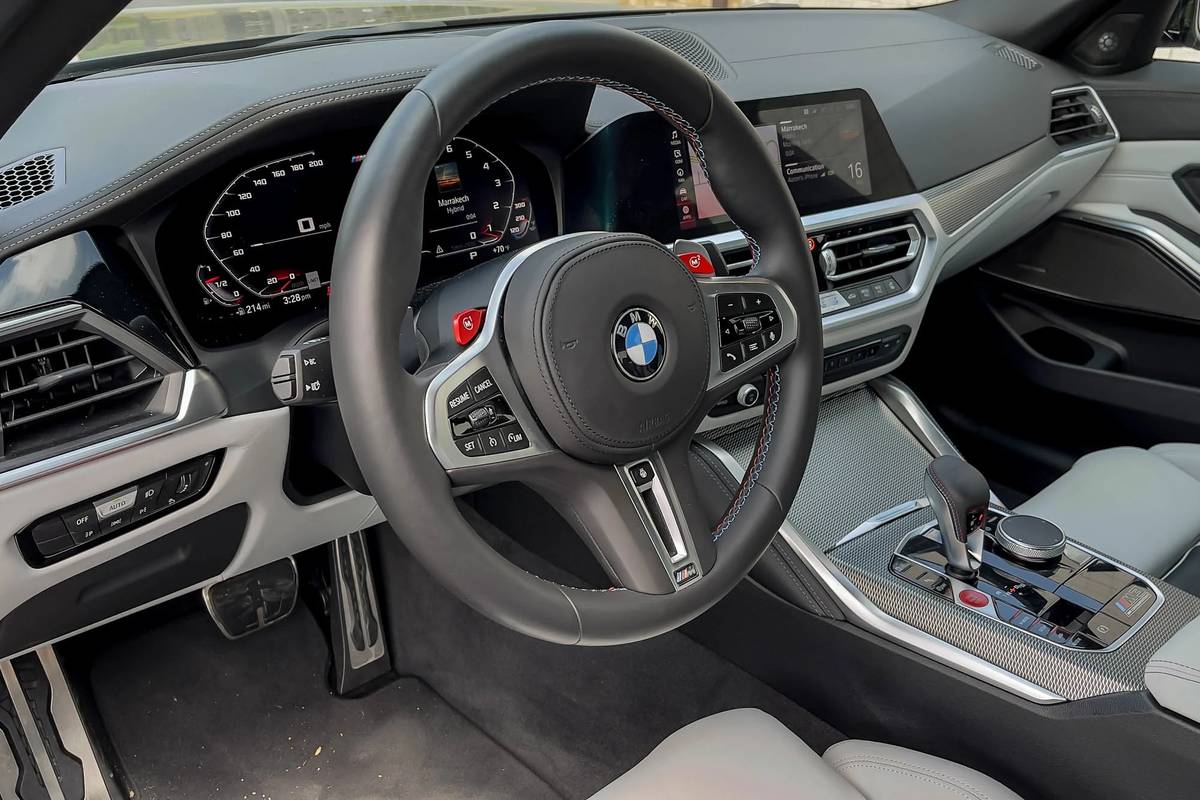 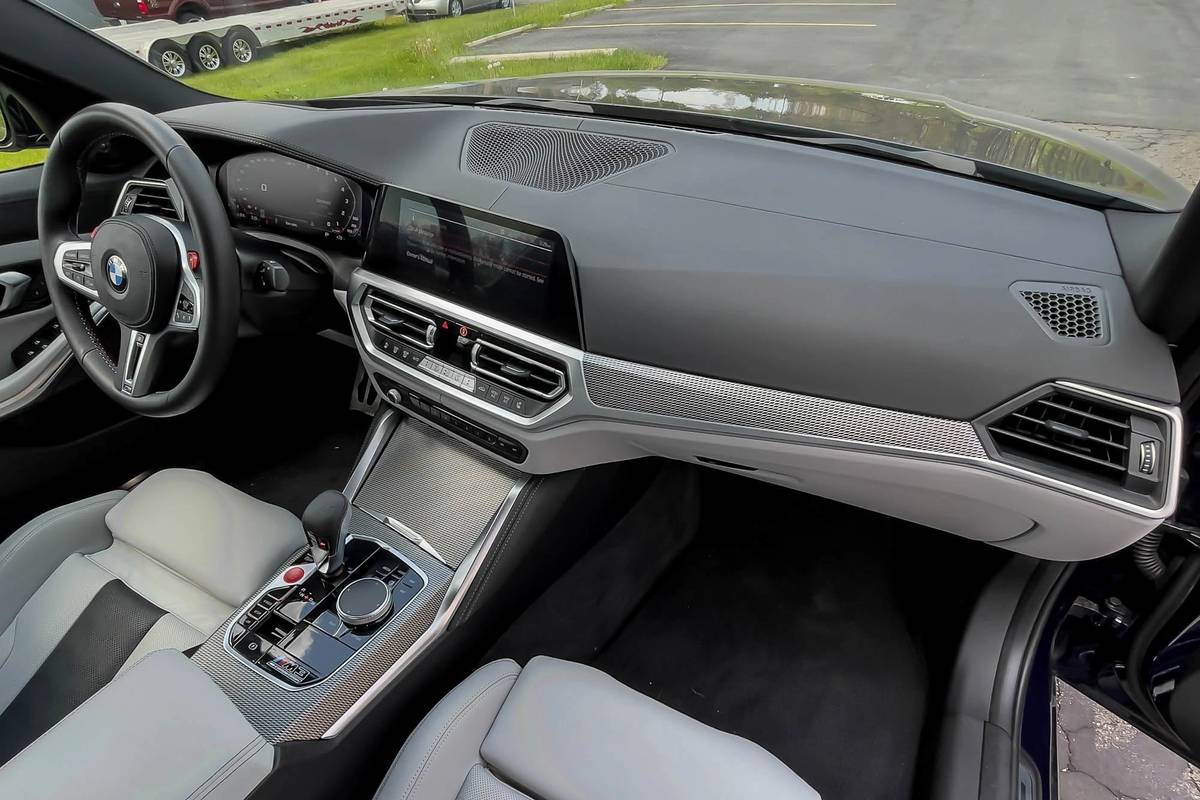 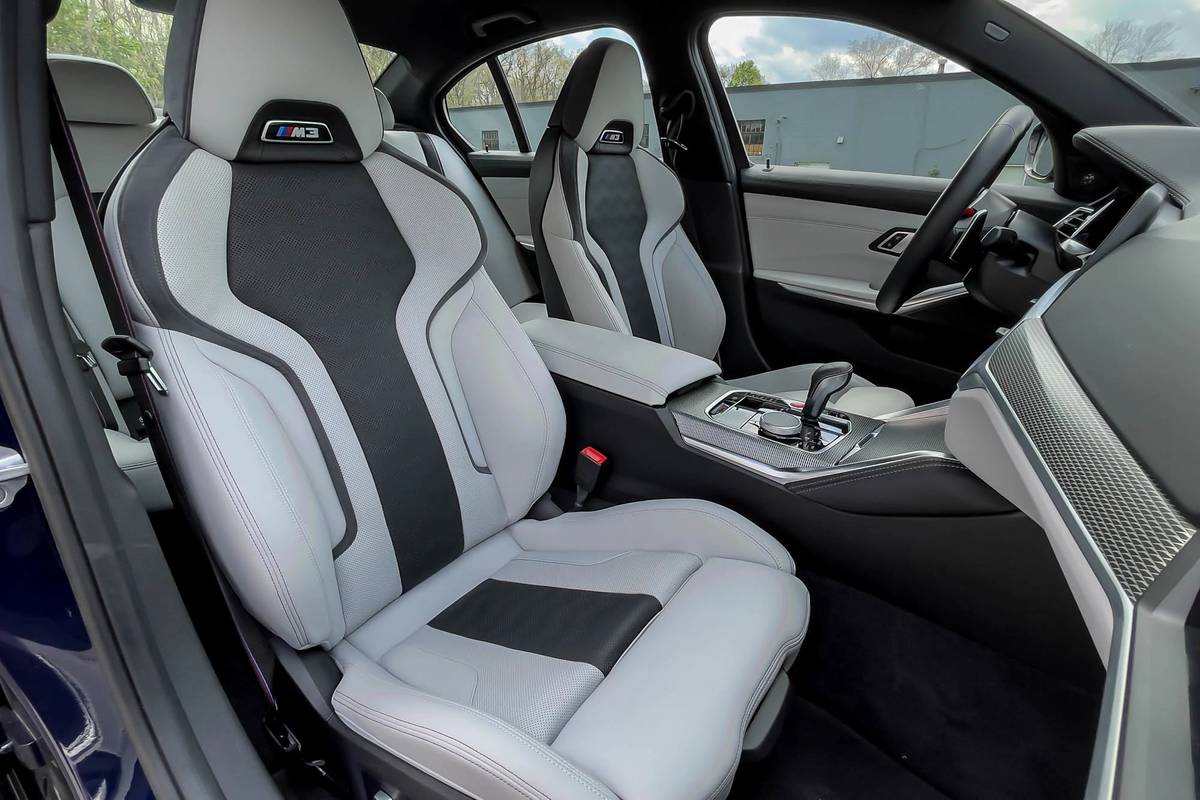 It starts with one of the sweetest gasoline powertrains ever put on four wheels: BMW’s TwinPower turbocharged 3.0-liter inline-six-cylinder engine, which pumps out 503 horsepower and 479 pounds-feet of torque in the Competition trim. That’s a bit more than in the standard M3, where the engine produces “only” 473 hp and 406 pounds-feet of torque. I drove a Competition trim, which can be had only with an eight-speed automatic transmission; if you want a stick shift, there’s a six-speed manual available, but it can’t be had with the Competition variant. I drove a rear-wheel-drive M3, but, for the first time, all-wheel drive is set to be available any moment now.

I didn’t even mind that my test car was an automatic, as its engine and transmission combination is world-beating. The two are exceptionally well matched, and you can fine-tune how it performs by selecting one of six progressively sportier transmission modes — three automatic and three manual. I rarely used the manual function for shifting gears; I felt no need to second-guess what the transmission was doing quite well on its own, and the idea of manually shifting an automatic transmission with flappy paddle shifters strikes me as silly.

Acceleration is explosive. Mash the go-pedal and hang on for dear life, as the thing rockets forward with serious force when asked to do so. The beauty of the M3 is that everything seems electronically adjustable, from throttle response and transmission shifts to steering feedback and brake pedal feel. You store your settings in the computer, then choose them via a couple of big red buttons right on the steering wheel.

When it comes to M Performance cars, I like to set up one of the two options as a cruiser (relaxed responses, softer suspension, easy-does-it gear changes) and the other as a brawler (aggressive steering, firmer suspension, hair-trigger throttle). For around-town driving, I keep it in cruiser mode and enjoy driving a comfortable, luxurious sports sedan. Then when I come upon a twisty bit of back road — or even a long highway on-ramp — brawler mode instantly ratchets the M3 up to far more aggressive, entertaining levels for as long as I want it to.

And man, is it ever entertaining. Everything on the M3 Competition is track-ready, with electronically controlled brakes that feel far better than those in a standard 3 or 4 Series. Steering is quick and responsive, and the suspension is sophisticated — all of which combines to allow for driving well in excess of posted speed limits without even realizing you’re doing so. The only indication you’re going faster than you should is a rather surprising amount of road and wind noise that comes through to the cabin. Part of that was due to my test car’s super-sticky summer performance tires (on 19-inch wheels up front, 20-inchers in back), which transmit a lot of pavement noise partly thanks to the car’s aerodynamics.

While the latest M3’s exterior has changed considerably versus the outgoing model, the interior has seen a more evolutionary progression. It’s changed so slowly, in fact, that you might sit in the thing and wonder what’s even different. But that’s OK, as BMW’s latest interiors are quite nice — and they do not include an overly aggressive move toward touch-sensitive flat panel surfaces over traditional buttons, thank goodness. 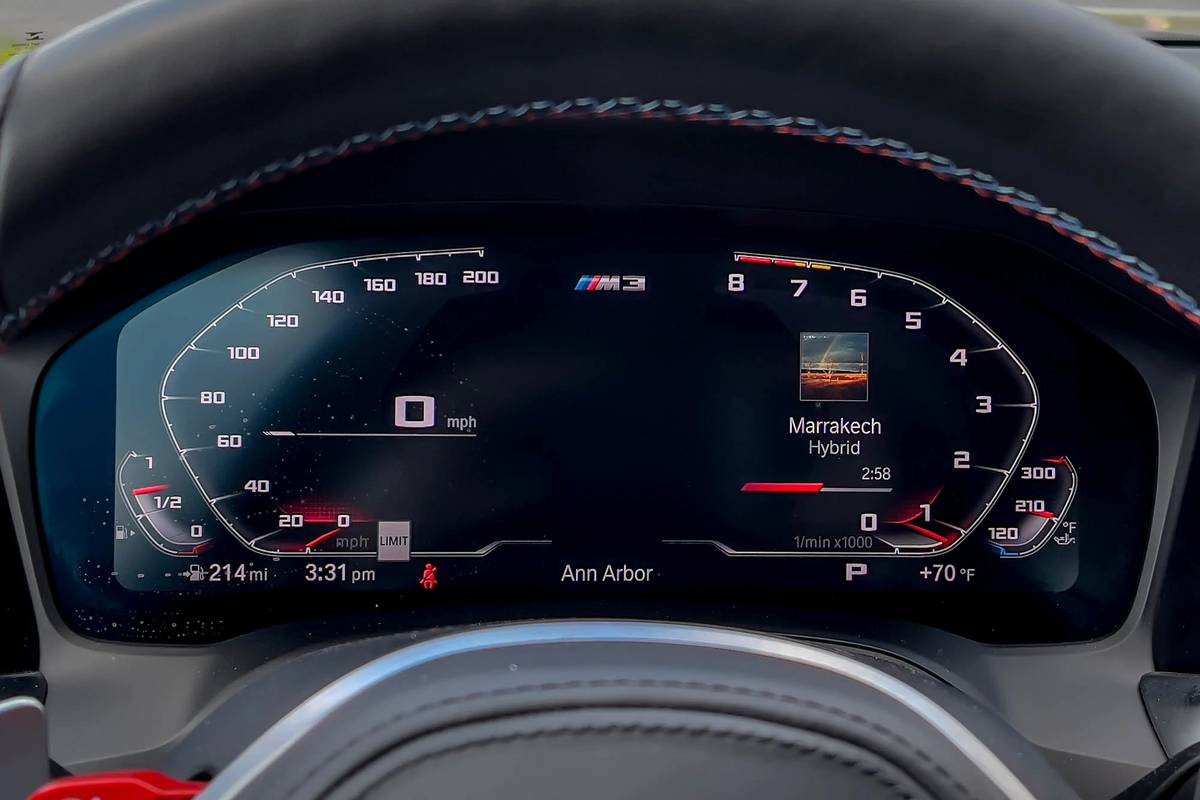 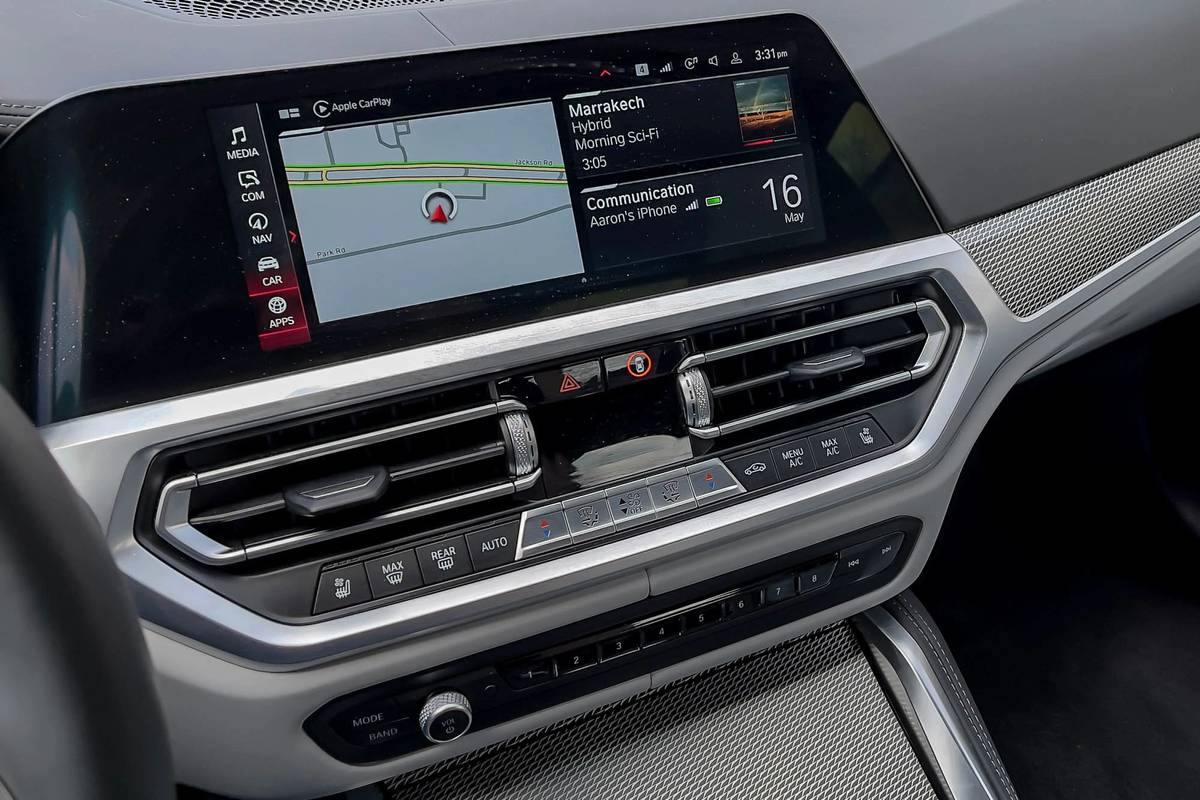 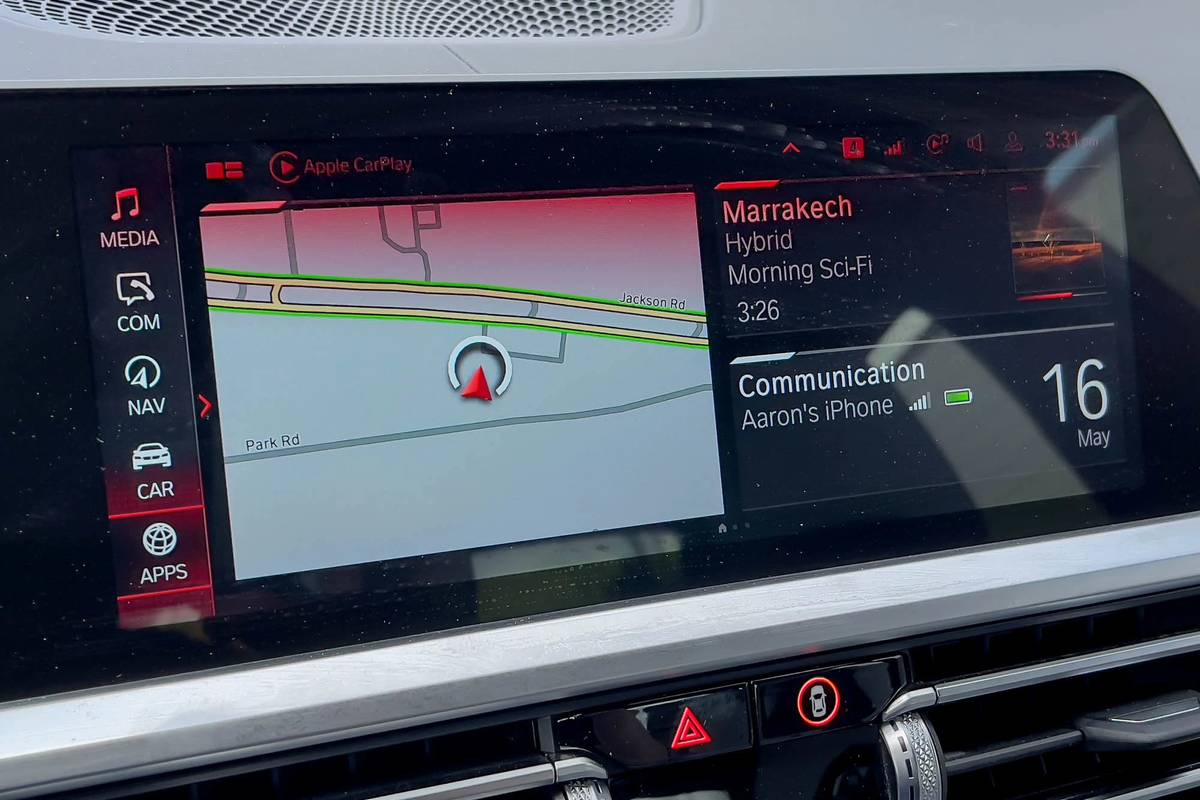 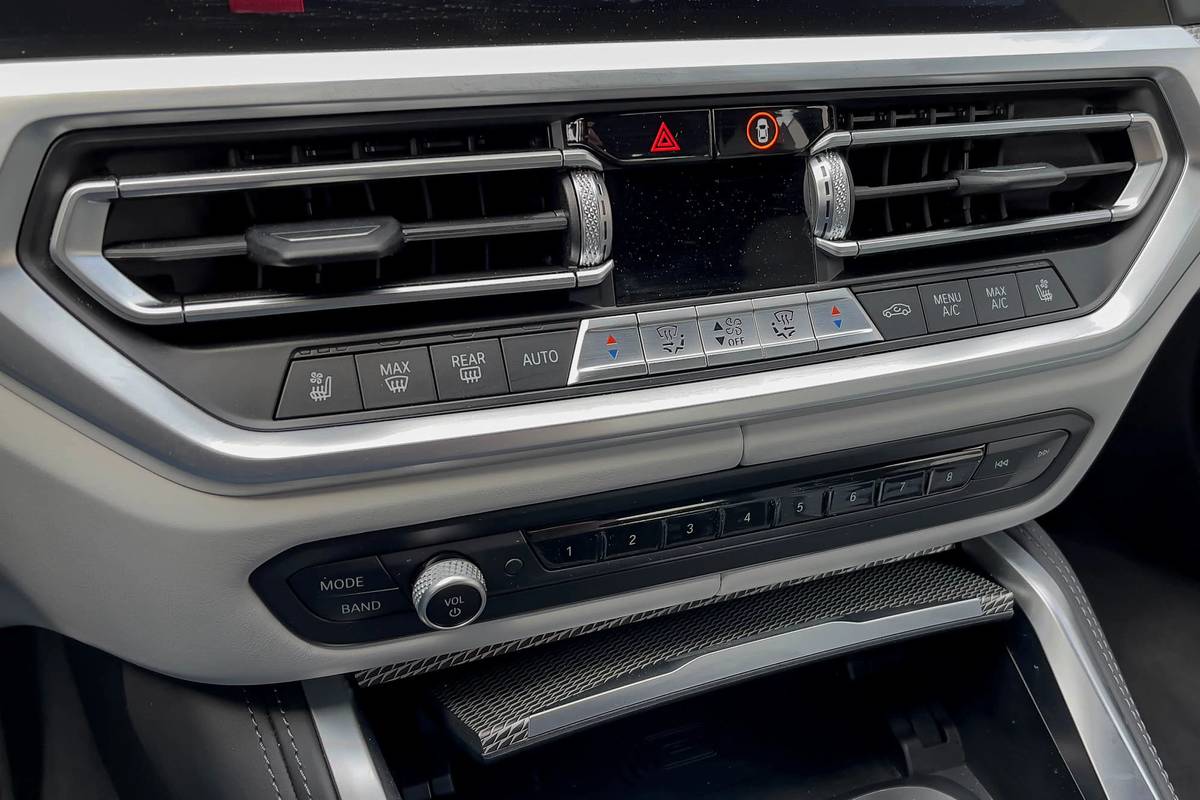 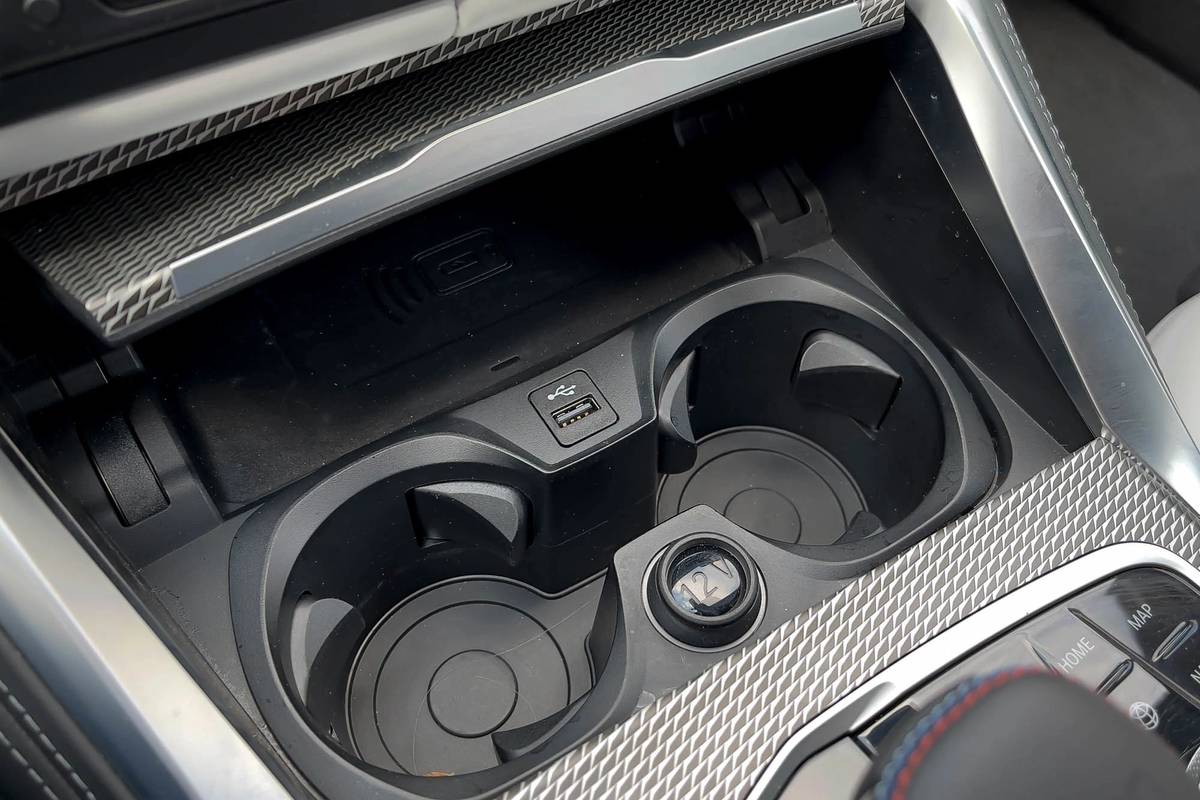 Instead of a sea of fingerprint-laden plastic inside the M3, you get actual high-quality buttons, knobs and controls, which convey the sense of luxury and precision one expects when paying this much for an automobile. My test car was done up in a stunning light and dark Silverstone/Black full Merino leather theme that perfectly matched its deep Tanzanite Blue Metallic exterior paint. The color scheme gave the M3 a sporty high-tech feel instead of the more traditional luxury-car feel you get in one of BMW’s Alpina sedans.

The M3’s sport seats might look too aggressively bolstered and uncomfortable, but they’re anything but; they proved to be supremely comfortable and supportive in all the right places, both in spirited driving and on longer highway voyages. They look the business, too, matching the M3’s sporting personality well.

The Competition trim I drove also featured an optional Executive Package, which includes niceties like a heated steering wheel, BMW’s Gesture Control for the multimedia system, a head-up display and more. The chunky steering wheel feels excellent in your hands, but the real standouts are the bright red M1 and M2 buttons on the spokes; they just beg you to punch them and let the M3 loose on the world. 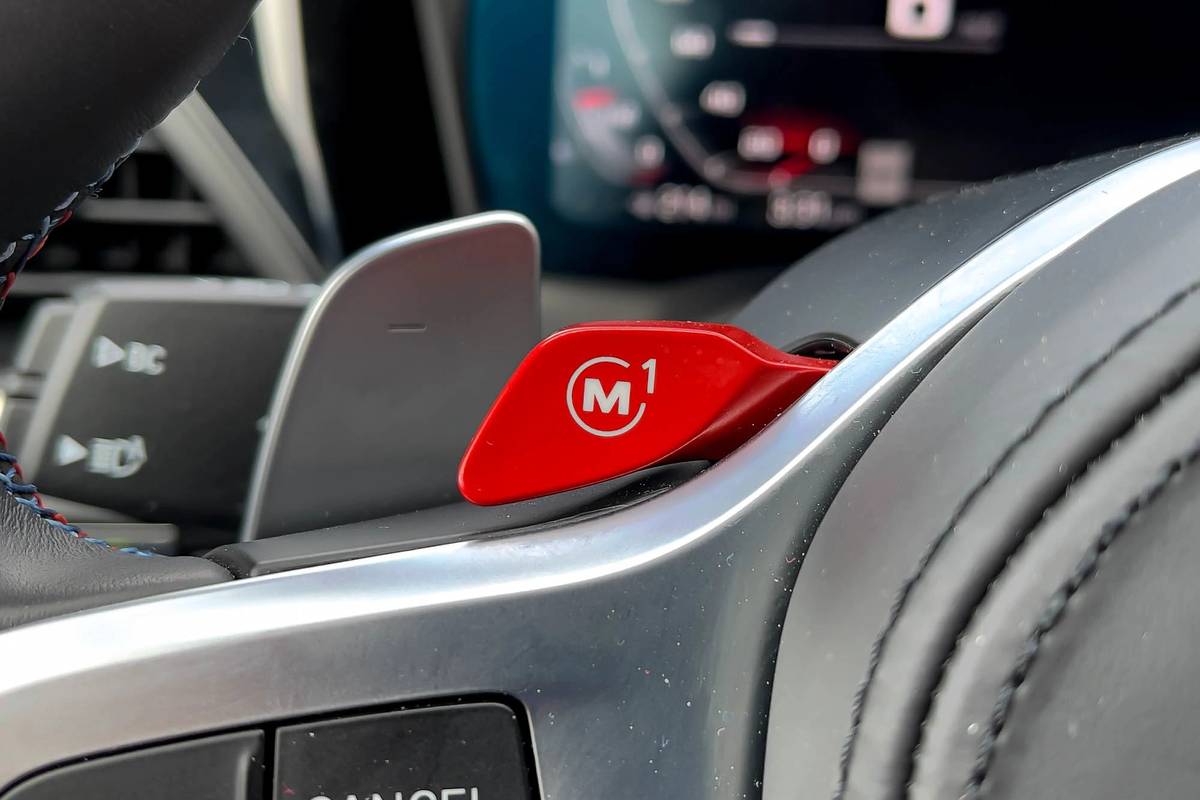 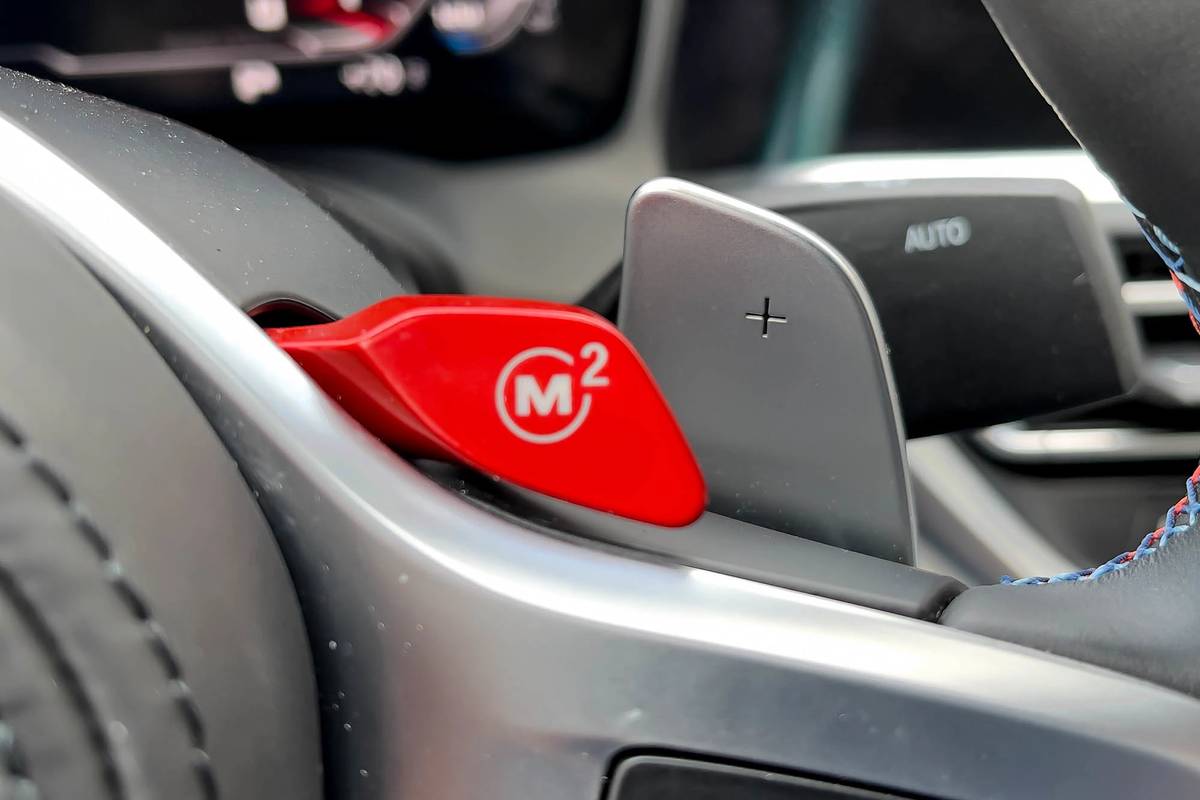 There’s also a decent amount of space for front passengers, with plenty of legroom and headroom. The backseat, however, is another story. That said, the 3 Series has always felt tight in back; its legroom just isn’t great. Such is the trade-off one makes to enjoy the M3’s relatively compact overall dimensions. The rear seat is acceptable for short distances if front passengers don’t mind moving forward, but it’s not somewhere you’ll want to spend a lot of time. There’s a decent amount of trunk room, however, despite the car’s rather narrow cavity.

The M3’s overall performance is stunning. It’s an immensely satisfying driver’s car, with abilities and technology matching more exotic supercar coupes, but in a package that’s eminently more sensible as a daily driver. It’s easily track-capable off the showroom floor, and it can also be a satisfying backroad brawler or high-speed highway cruiser if its driver never wants to turn a wheel in anger on a race course.

The M3’s starting price is $70,895 (prices include destination), jumping up to $73,795 for the Competition trim. Bumping up to the Competition gets you the more powerful engine, a standard automatic transmission (the manual is sadly not available), larger wheels and tires, special seat belts and Shadowline exterior trim. My test vehicle had a few other options, including a $1,950 paint job and a special leather interior that ran $2,550. The Executive Package costs $3,000 and adds remote start, a heated steering wheel, a power opening trunk, adaptive LED headlights, wireless personal electronics charging and BMW’s gesture control for the latest iDrive multimedia system. The total for my deep blue test car came to $93,495.

A hundred grand isn’t chump change for any kind of automotive purchase, but the sheer capability of the new M3 — and its ability to generate an amazingly entertaining driving experience on the road or the track — means it’s a screaming value compared with supercars that do the same things, usually with less interior space and functionality.

The M3 is 85% brilliant; it’s the 15% forward of the front fenders that’s the big problem, and it’s more than just a casual issue. If other buyers are as turned off by the new face as was my friend, it could spell trouble for BMW. If buyers are more interested in the car’s abilities than its appearance, however, the German luxury brand has nothing to worry about.

I got a lot of head nods on drive home People seem to like it. May be because the new style is eye catching I have owned other sport car. This one is my favorite. 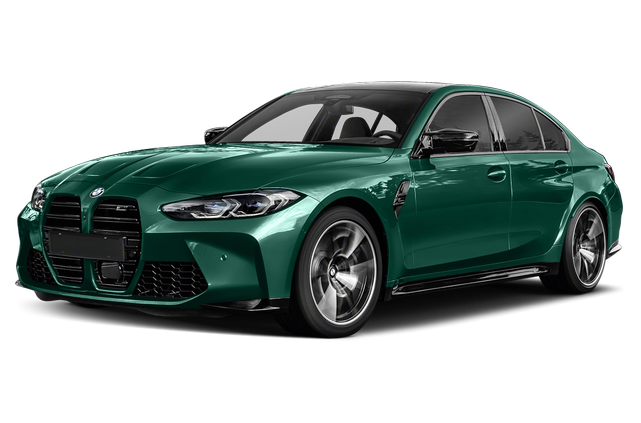 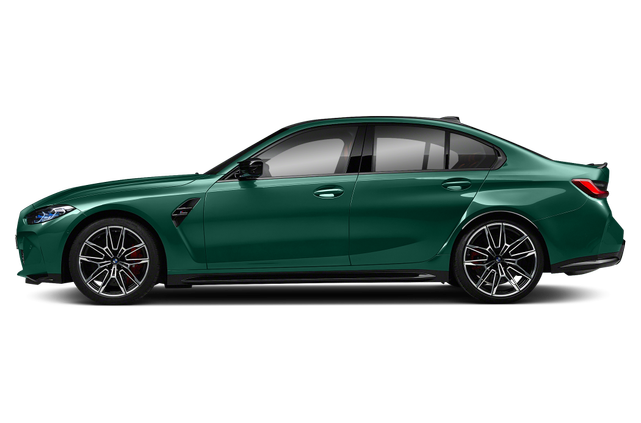 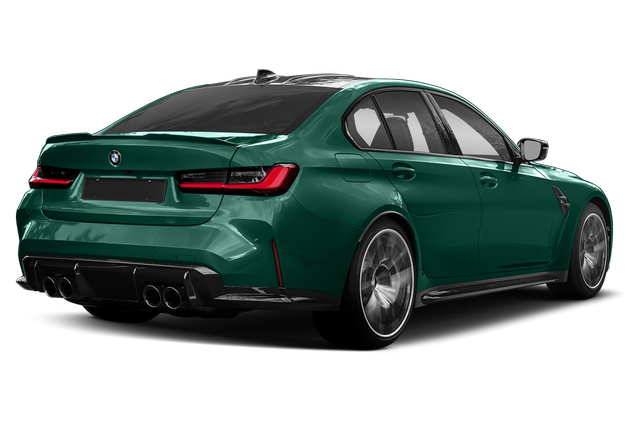 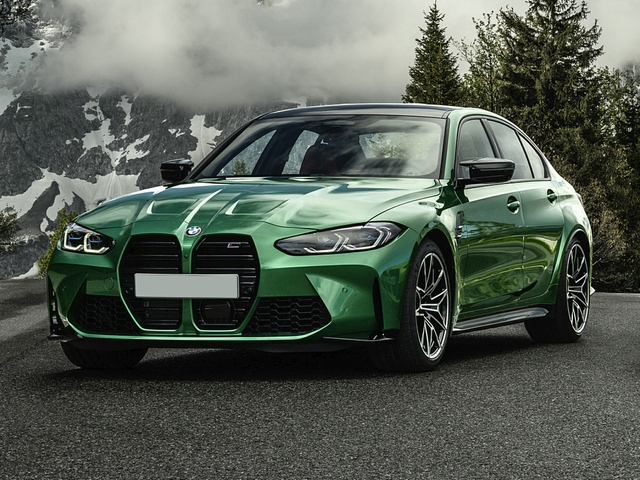 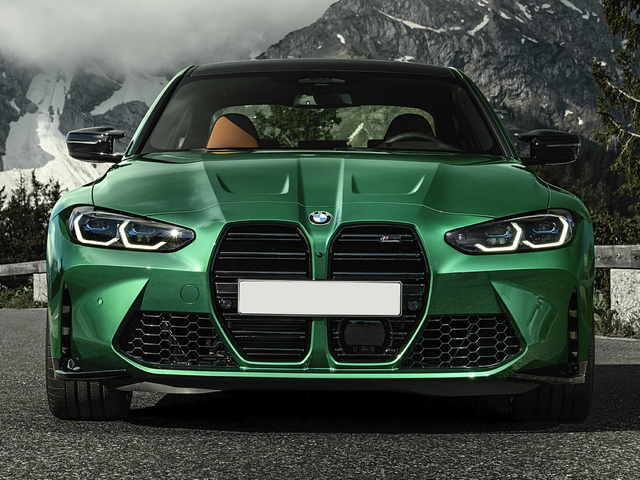 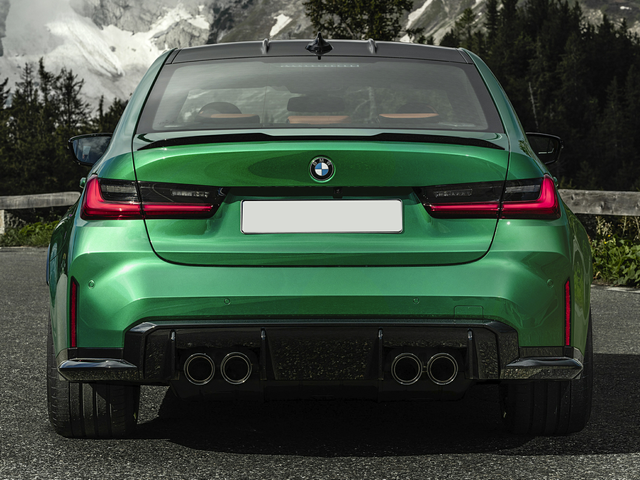 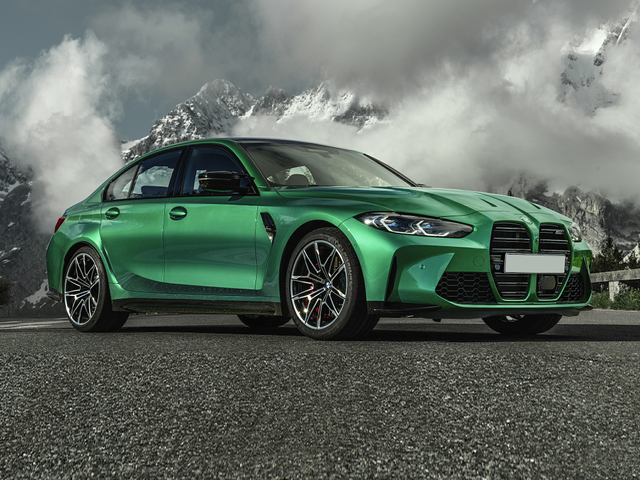 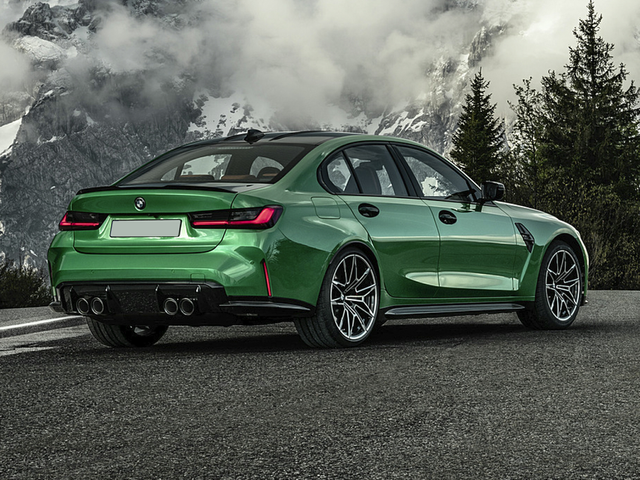