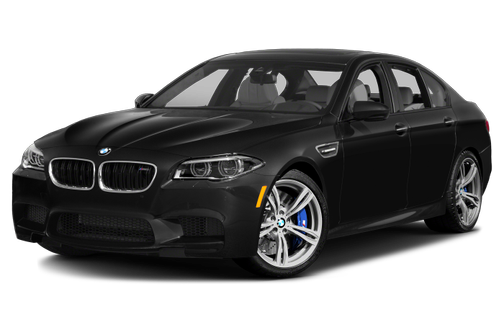 Our 2014 BMW M5 trim comparison will help you decide.

Editor’s note: This review was written in January 2013 about the 2013 BMW M5. Little of substance has changed with this year’s model. To see what’s new for 2014, click here, or check out a side-by-side comparison of the two model years.

The ultimate 5 Series sedan — ranking above the 535i and 550i — BMW’s M5 is blazingly fast. This four-door “family sedan” with 560 horsepower and insane acceleration rivals the thrill of most dedicated, two-door sports cars. Channeling the M5’s tremendous power is a six-speed manual transmission, which high-horsepower super-sedans like Mercedes’ E63 AMG and CLS63 AMG and the Audi S6 don’t offer. Compare the M5 with those sedans here.

Though appealing in theory, the 2013 BMW M5’s exclusive six-speed manual transmission just isn’t that good, and it leaves the M5’s driving experience unfulfilling.

The manual transmission’s vague shifter, long throws and numb clutch pedal are sloppy, like an economy car’s, and don’t inspire the confidence needed in a powerhouse like the M5.

Get the Automatic Transmission
The M5 is hard to drive with a manual transmission in the way I imagine taming a bucking bronco would be for someone with the wrong tools. The M5 shifter’s lack of precision is not a good characteristic for an insanely powerful car. There’s no real sense of confidence in the stick, which sometimes feels as if it will bend in half or slip out of gear because it’s so flimsy and clunky; it won’t actually break, but it’s far from a precision instrument. Successfully clicking off smooth and quick shifts is rare, and it takes concentration to operate seamlessly on spirited drives. The flimsy shifter pairs with an equally awkward, nonlinear clutch that requires more slipping to drive smoothly than I’d like; let the clutch out normally, and the M5 truly is like that bucking bronco.

Adding to the confusion is a mysterious notch to the left of 2nd gear into which the shifter moves during aggressive shifting — a trait of other BMW manuals, including the M3’s. It’s frustrating to be wide open, go to grab 2nd gear and totally miss it because the shifter went left into nowhere-land. Reverse is an equally less-than-ideal execution with no real safety provision, one editor noted. Reverse engages when you throw the shifter to the left hard enough at a stop — not by lifting a ring or pushing down to engage.

What is executed well is the manual’s rev-matching feature that automatically blips the throttle during downshifts to raise engine speed for smooth engagement. The Nissan 370Z has a similar feature on its manual transmission. The M5 executes the throttle blip perfectly over a wide range of downshifts, from casually downshifting while slowing for a stoplight, to grabbing 2nd gear from 6th at 50 mph and scaring passengers with a random blast of acceleration. The throttle-blipping feature is active on two of the M5’s engine driving modes — Efficient and Sport — but race-ready Sport Plus mode disables the feature so drivers have to rev-match themselves.

The six-speed manual is a no-cost option that all but manual transmission purists can skip. If you’re one of those, have fun. Everyone else should check out the seven-speed, dual-clutch, automated manual transmission. In the BMW M6, this transmission paired with the same engine shifts quickly and was surprisingly fun to drive with paddle shifters (most aren’t).

The M5’s manual transmission has better gas mileage ratings — 15/22 mpg city/highway compared with 14/20 mpg for the automatic — though gas mileage is rarely a priority among buyers of these pumped-up super-sedans. A gas-guzzler tax of $1,000 still applies to the manual transmission despite an increase in fuel economy compared with the old M5 (11/17 mpg). The E63 AMG and CLS63 AMG are exempt from the guzzler tax thanks to their higher gas mileage ratings (16/24 mpg and 16/25 mpg, respectively). Compare the previous M5’s specifications versus the 2013’s and its two competitors here.

Taming the Beast
Helping rein in the M5’s big power are various active suspension, steering and engine modes. There are three modes for each system: Comfort/Efficient, Sport and Sport Plus. Customizable M1 and M2 buttons on the steering wheel let you store particular combinations that you can then activate with a single press. For example, you can configure M1 as a comfort button with all settings on the comfort/efficiency option and M2 can be set as the race-ready, “I-wanna-go-fast” mode. The M1 and M2 shortcuts are hugely useful and should be copied by every high-performance automaker who decides to offer more than two modes. Mercedes uses a similar function with its AMG button on various AMG models.

The differences between the comfort and full sport modes is dramatic, with a suspension changing from slightly firm to bounce-out-of-your-seat firm. The throttle becomes significantly more sensitive while the steering also firms up, though it’s already tight to begin with.

The sportiest modes do an admirable job of hiding the car’s weight, but they can’t make the M5 feel light and nimble thanks to its 4,354-pound curb weight — in spite of its use of aluminum for the hood, front fenders and doors.

Unfortunately, the M5 we drove had summer tires that didn’t grip the road with any kind of authority in temperatures that topped out around 40 to 50 degrees. It was nearly impossible to control wheelspin in 1st and most of 2nd gears. The vicious rush of power from the twin-turbochargers overpowers the traction control in its various modes, including the looser M Dynamic Mode, where the computer still abruptly cuts power to keep the car in control. The reward when the M5’s tires agree with the road and the shifter goes where it’s aimed is a blast of grin-inducing acceleration that’s part sheer acceleration, part satisfaction that the shifter, clutch and tires are working together in harmony.

BMW’s Active Sound Exhaust
BMW “enhances” the auditory strength of the M5’s noises with its Active Sound, a reproduction of engine noises piped through the stereo for added effect. It’s a subtle and very artificial addition. A sports car’s sound is very much part of its character and uniqueness, and the M5 still needs work, with its video-game-like artificial boost of engine noises on the inside.

What’s puzzling is that the roar of the engine and exhaust, and the defined turbocharger whistle, are greatly pleasing with the windows down. It just doesn’t find its way into the cabin otherwise, which is why BMW went the artificial route. An aftermarket exhaust on the M5 would surely bring out the 4.4-liter’s true exotic sounds. The Mercedes-Benz E63 and CLS63 AMG sound hellacious and borderline obnoxious compared with the M5, with a much deeper, fuller and rewarding exhaust.

Even so, exhaust preference is hugely subjective, and what may be music to some is fingernails on a chalkboard to others.

Inside
The M5’s real aluminum trim (called Aluminum Trace) is unique to the M5 and plentiful on the dashboard and door panels. Seeing the real stuff in such quantity and quality makes the fake, painted plastic in less-expensive cars even more pitiful. Standard equipment includes a 10.2-inch display screen and iDrive multimedia system, an anthracite headliner and engraved door sills with the M logo. Replacing the blah gauges of the regular 5 Series are red-needle gauges and a head-up display with a sweeping tachometer to keep an eye on engine revs. See here for a full list of standard and optional features.

There still isn’t a decent cupholder in the entire 5 Series. The M5’s are a flimsy D-shaped one up front and a massive, almost unusable one that flips down from the underside of the center storage compartment lid. The M5 isn’t a dedicated sports car like the Porsche 911 — it’s a sedan. C’mon, BMW. Give us something to work with here.

Safety
The 2013 BMW 5 Series is a Top Safety Pick by the Insurance Institute for Highway Safety, having earned the institute’s highest score, Good, in moderate overlap frontal, side-impact and rear crash protection, as well as in a roof-strength test.

Standard safety features include front and side airbags, side curtain airbags for front and rear passengers, and the federally mandated electronic stability system and antilock brakes. A full list of standard safety features is available here. Safety options include a Driver Assistance Package for $1,900 that includes a lane departure warning system, blind spot monitoring and side- and top-view cameras.

In the Market
The novelty of four doors paired with more than 500 horsepower never tires. Adding a manual transmission may seem like it would make the M5 the holy grail of super-sedan driving fun, but it’s far off the mark. The M5 is as exciting as you’d expect, though the sloppy manual transmission keeps it from being as entertaining as it should be.

The M5 is a head-turning, luxury sports sedan that delivers an adrenaline rush in an instant. Competition package is the way to go! Love this car!

Fast and the Luxurious

This vehicle breathes speed and luxury!! It drives so comfortable and smooth that you have to constantly check your speed to ensure your not breaking the speed limit. When you are sitting inside, your more comfortable than when sitting in your dad's recliner! The leather seats just hug you and make you feel like a part of the car. If you've never owned or tested a BMW M5... You are definitely missing out on one of the best driving experiences on the road!! 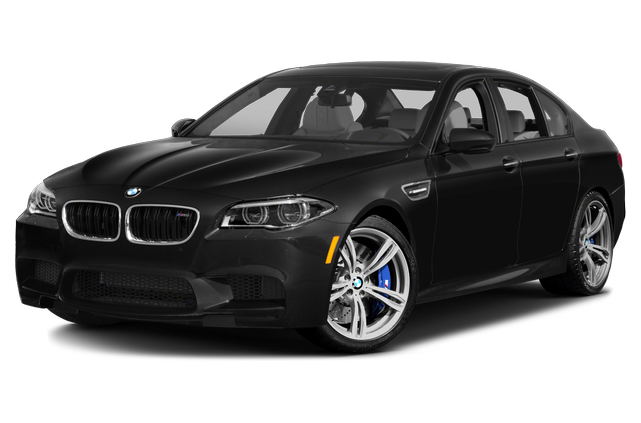 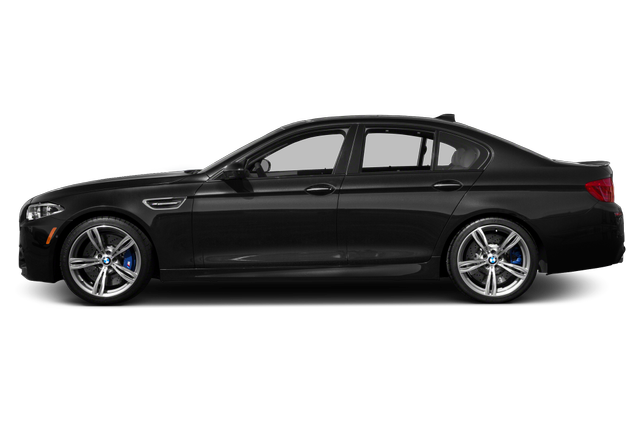 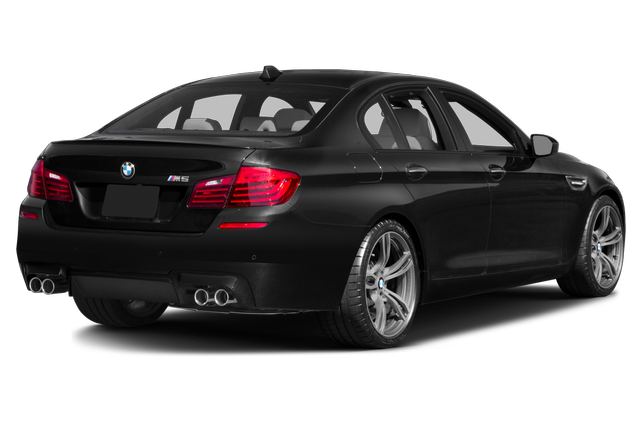 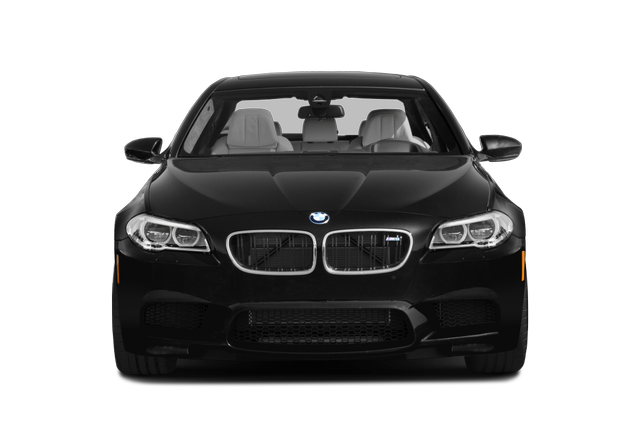 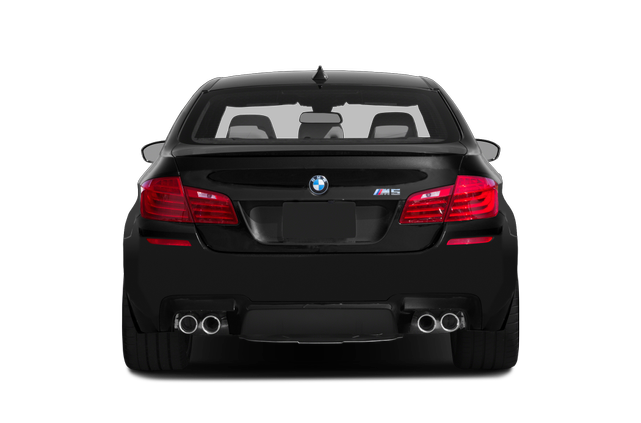 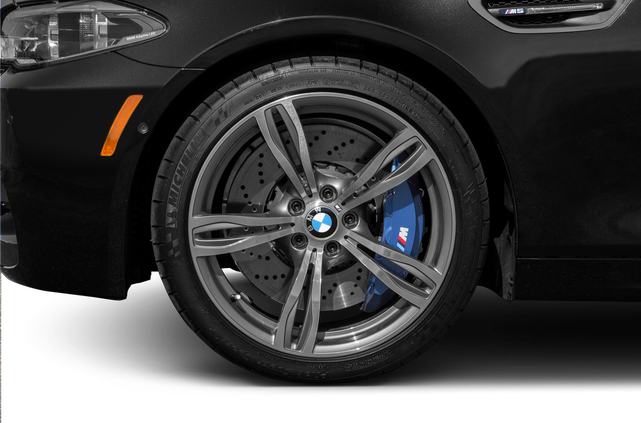 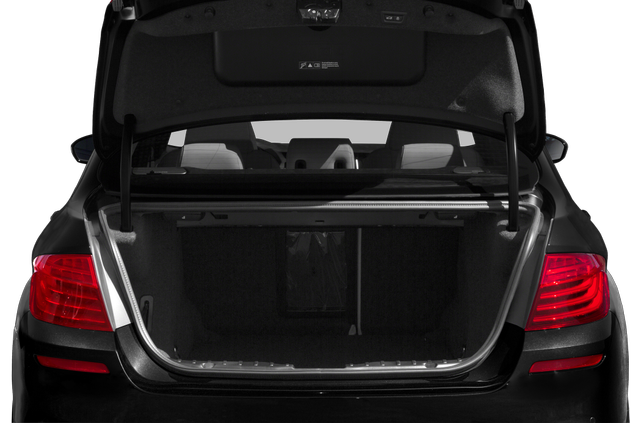 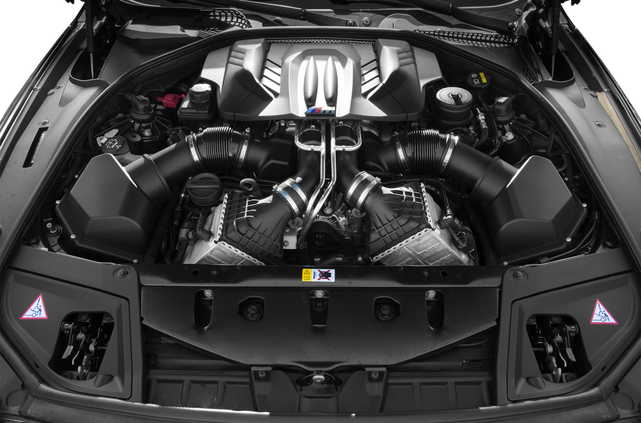 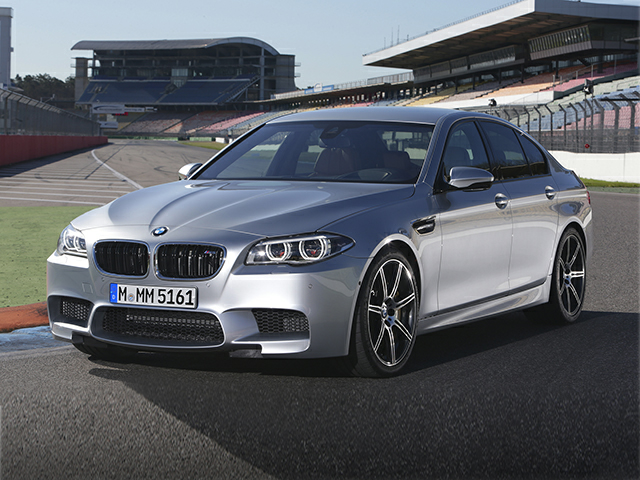 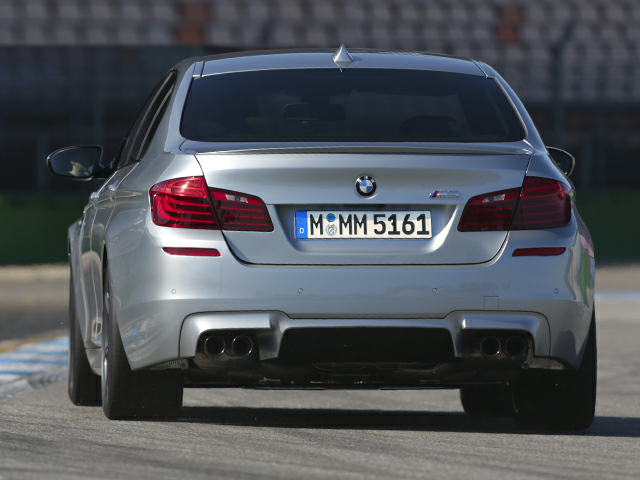 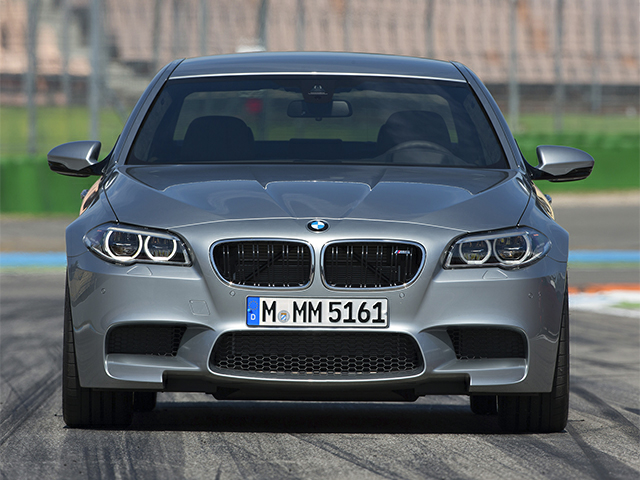 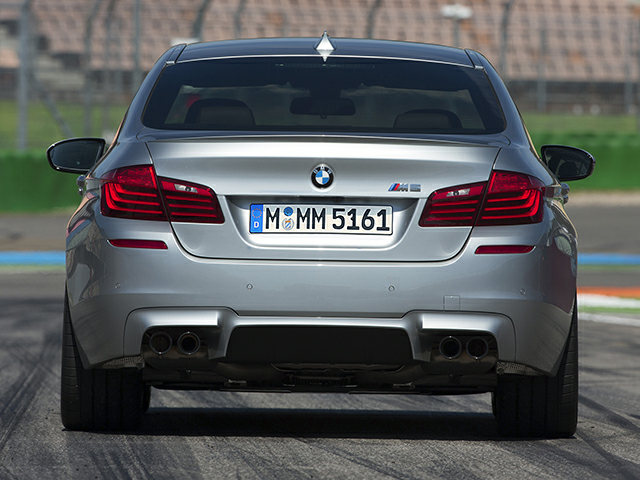 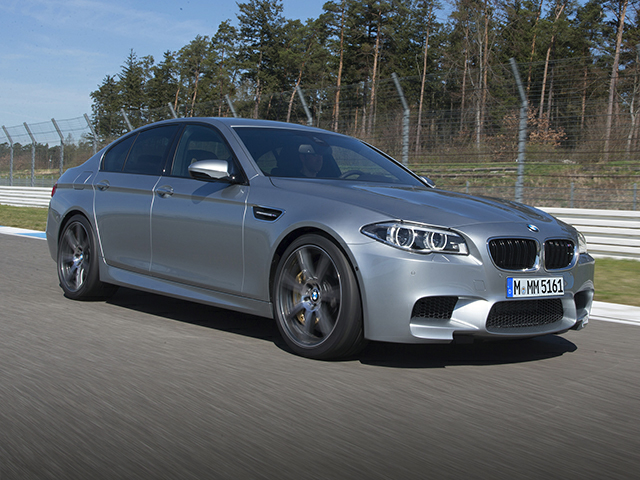 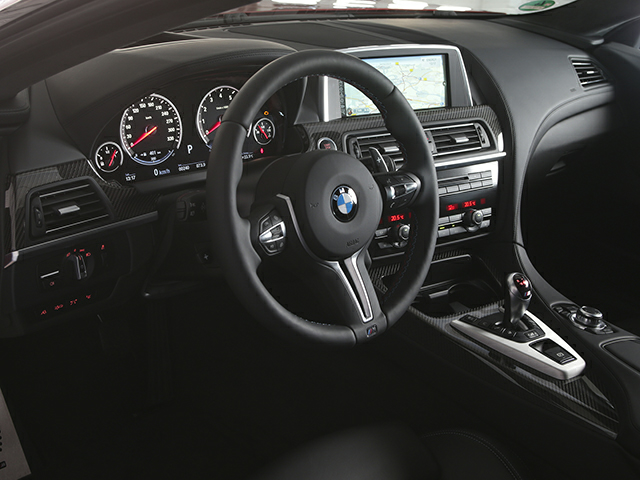 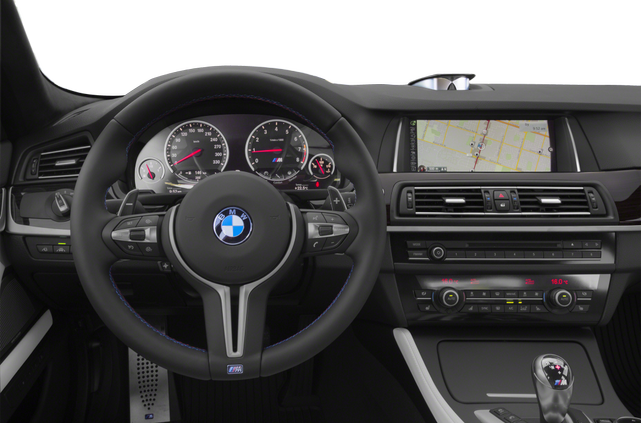 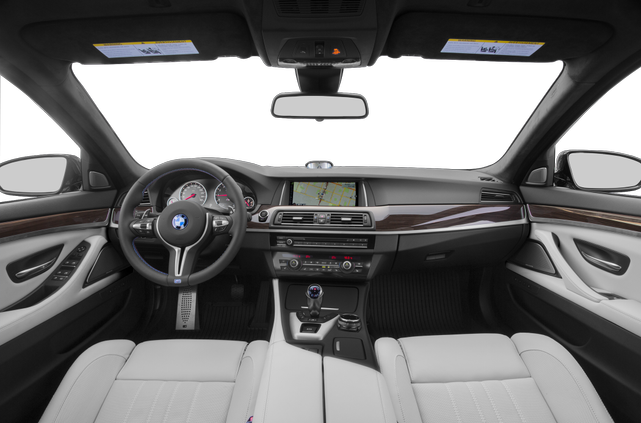 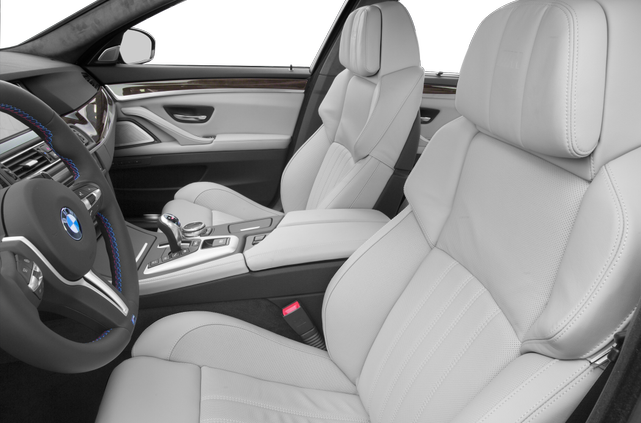 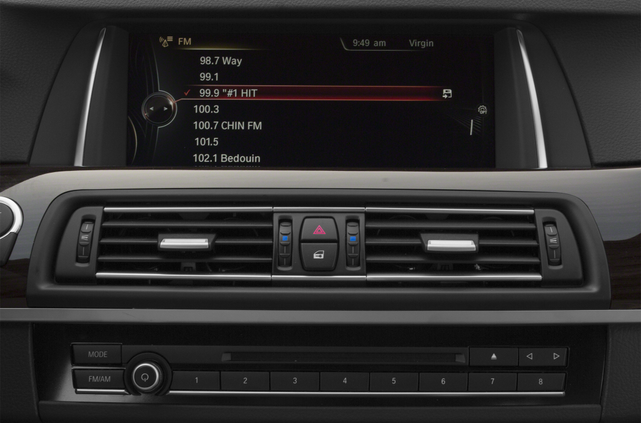 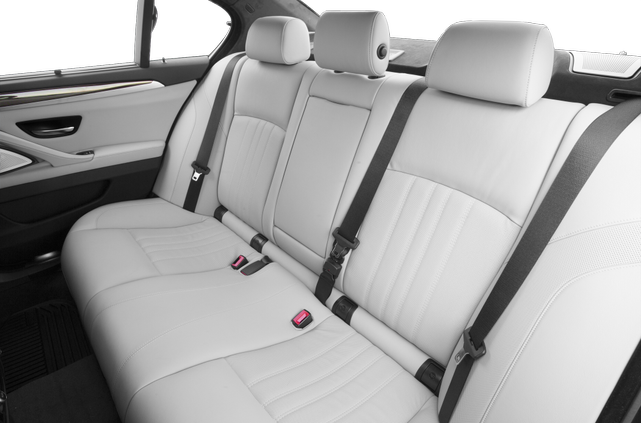 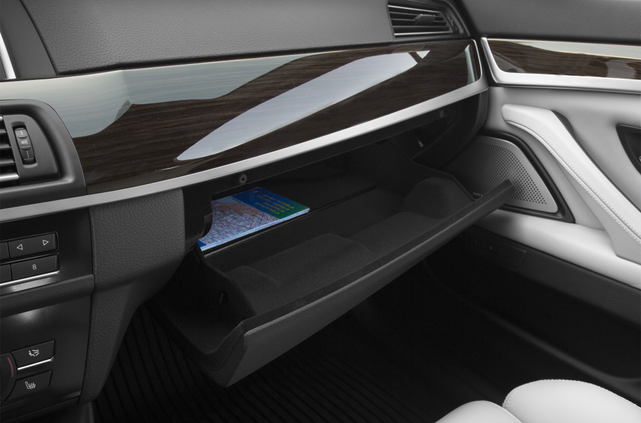 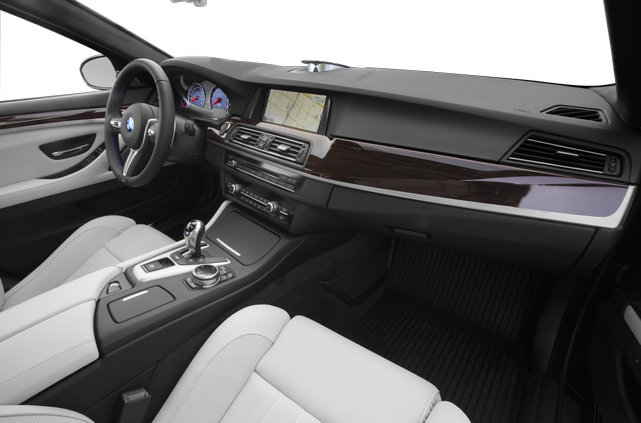 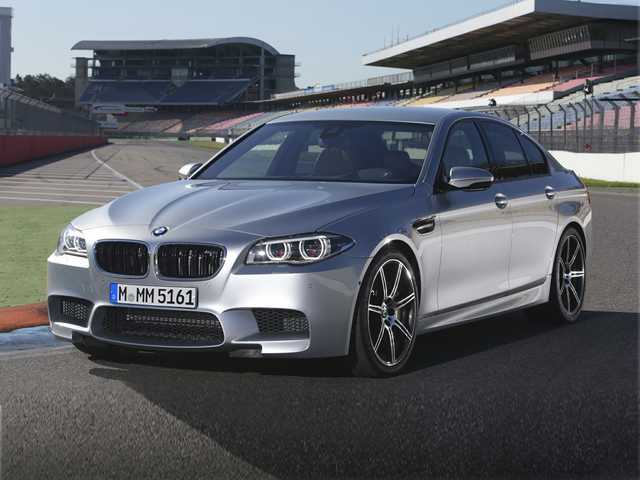 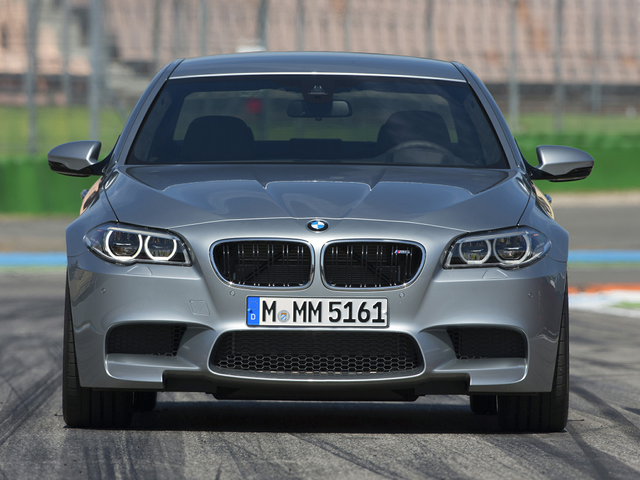 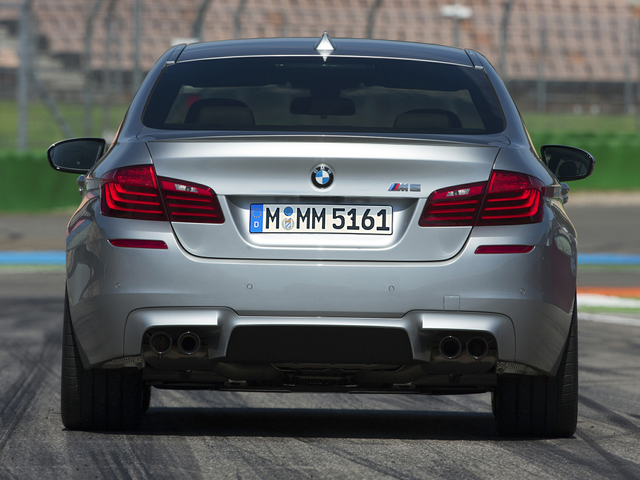 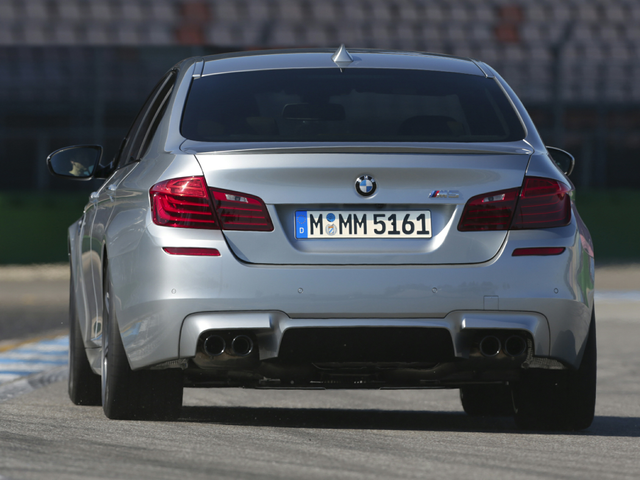 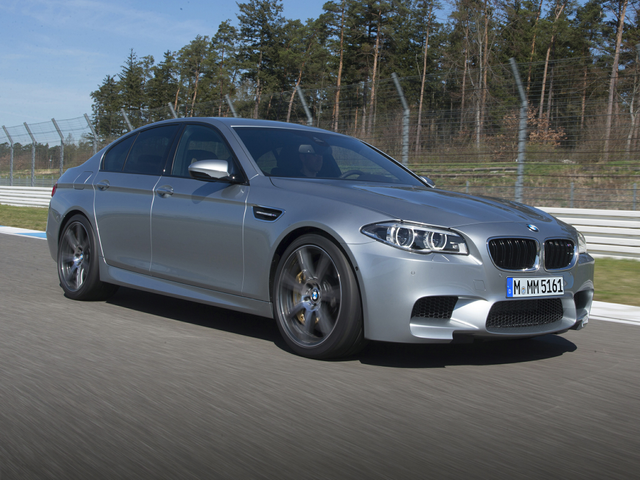 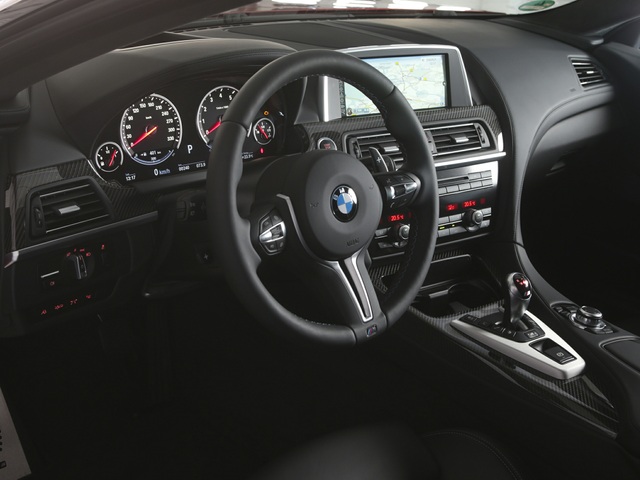