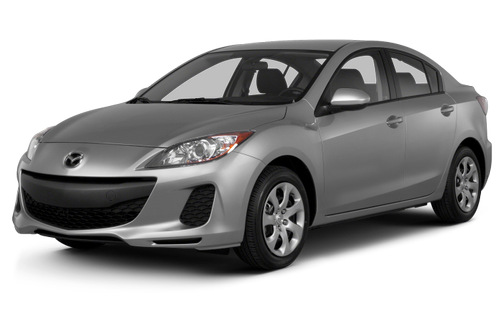 Our 2013 Mazda Mazda3 trim comparison will help you decide.

Editor’s note: This review was written in January 2012 about the 2012 Mazda Mazda3. Little of substance has changed with this year’s model. To see what’s new for 2013, click here, or check out a side-by-side comparison of the two model years.

Thanks to new drivetrains, the 2012 Mazda3 has fuel economy ratings as high as 40 mpg on the highway. That’s a big gain over last year that addresses a major shortcoming in the brand’s most popular car. After all, at least five 40-mpg competitors will be on sale by this summer. The bandwagon is unstoppable, and now Mazda has a seat on board.

The 2012 Mazda3’s refinement issues will linger until the car gets a full redesign, but its driving fun and fuel efficiency keep the car competitive.

The Mazda3 comes as a sedan or hatchback with four available engines and essentially 11 versions, including the turbocharged Mazdaspeed3. Two trim levels have the suffix “SkyActiv,” which represents high-mileage technology in the form of the company’s newest four-cylinder engine and/or select transmissions and other technologies. As is the case in most competing models, the highest mileage figures come in the more expensive sedan trim levels. The most affordable hatchback is efficient, but the base price for this body style is more than $4,000 higher than the base sedan’s.

In any configuration, the Mazda’s firm ride will turn off some shoppers, but the mileage makeover breathes new life into a model that has never emphasized efficiency. Click here to compare drivetrains, or here to compare the 2012 Mazda3 with the 2011. We tested a stick-shift 2012 Mazda3 hatchback with the SkyActiv four-cylinder. We’ve driven the other engines in years past.

The 155-hp, direct-inject SkyActiv engine, also a 2.0-liter four-cylinder, adds a modest 7 hp and — more importantly — 10 percent more passing-lane torque than its port-injected peer. It can be paired with either an automatic or a manual, both with six speeds. The SkyActiv engine comes in handy on the interstate, where our stick-shift test car accelerated 10 mph in 6th gear at a reasonable pace. The base 2.0-liter — and a lot of four-cylinder competitors — needs a downshift in order to speed up on the highway. Around town, the 2.0-liter engines feel similar to each other, except that the SkyActiv’s slow initial accelerator response translates to anemic start-offs. The Mazda3’s optional 2.5-liter four-cylinder has gutsier midrange power that makes it quicker than most commuter cars, if less efficient.

The SkyActiv sedan is rated an EPA-estimated 28/40 mpg city/highway with the automatic, 27/39 with the stick. The SkyActiv hatchback has identical city numbers but is 1 mpg less efficient on the highway with either transmission. Still, that’s 2 to 7 mpg better than the base 2.0-liter, depending on trim, and 6 to 11 mpg better than the 2.5-liter Mazda3. All three engines use regular gas.

The Mazdaspeed3 comes only with a stick shift and sports a turbocharged four-cylinder that sprints to extralegal speeds. Its refinement, however, is disappointing. The car’s 263-hp engine feels old-school, with noticeable turbo lag followed by power that’s too peaky to savor. Dig deep into the gas, and the tach needle flies toward its 6,700-rpm redline at breakneck speed. For its $24,000 price, the Mazdaspeed3 is a go-fast bargain — our friends at “MotorWeek” hit 60 mph in it in just 5.2 seconds — but more low-rev torque with longer gearing would help drivers enjoy the experience a bit more. So would addressing the car’s torque steer, which becomes a major force on hard takeoffs. Such is the case in powerful front-drive cars, but some manage it better than this one. The Speed3 requires premium gas and is rated 18/25 mpg.

Handling & Ride
In the Mazda3, performance trumps comfort — but the payoff is impressive. Editors enjoyed our test car’s sharp steering and linear braking. The nose pushes in sweeping corners, but the tail breaks free soon after, allowing the driver to manage the car’s rotation. The Mazdaspeed3, in contrast, slings more fun-sapping weight over the front axle, which cuts its drifting potential. Its stickier Dunlop SP Sport P225/40R18 summer tires eventually cede grip up front, but the tail stays put, refusing to let you easily slide on all fours.

The Mazdaspeed3’s choppy ride can be punishing over potholes, and even the base Mazda3 trims ride firmly. On the highway, crosswinds require constant steering corrections, and the suspension in our 2012 test car lost its cool time and again over broken pavement. Road and wind noise, in contrast, were low; I just wish the suspension were as refined. Competitors like the Chevrolet Cruze and Hyundai Elantra marry ride and handling better. The Mazda still wins for outright fun, but comfort-minded drivers should look elsewhere.

The Inside
Cabin quality is competitive overall, but cars like the Cruze, Elantra and the forthcoming Dodge Dart are pushing ahead. The Mazda’s dashboard panels have upscale textures and padded surfaces; unfortunately, the doors and anything below eye level look considerably cheaper. Still, most controls are high quality, and the dashboard’s shallow rake leaves the interior feeling roomy.

Our test car’s basic cloth seats felt over-bolstered, leaving my back sore after a few hours behind the wheel. My 5-foot-11 frame could have used another inch or so of rearward travel, too. Such limitations preserve some backseat room, and anyone sitting back there will need it. The Mazda3’s legroom dimensions are misleading: There’s an alleged 36.2 inches in both the sedan and hatchback, which would put it near the top of the segment. In reality, though, it’s snug back there; rear seats in the Dart, Honda Civic, Kia Forte and Volkswagen Jetta feel roomier.

Trunk volume in the Mazda3 sedan is just 11.8 cubic feet; the Cruze and Jetta offer 15 cubic feet or more. The Mazda3 hatchback offers a more usable 17 cubic feet behind the backseat, with 42.8 cubic feet of maximum volume with the backseat folded down. Both figures are competitive among hatchbacks.

Safety, Features & Pricing
Reliability for the Mazda3 has been well above average, and the car scored top marks in all crash tests by the Insurance Institute for Highway Safety, earning the car Top Safety Pick status. But the Mazda3’s side-impact scores in the National Highway Traffic Safety Administration’s revamped side-impact tests returned just three out of five stars. Standard features include six airbags and the required antilock brakes and electronic stability system. Click here for a full list, or here to see our evaluation of child-seat accommodations.

The Mazda3 sedan comes in six trim levels. The SV and Sport have the base 2.0-liter engine. Touring and Grand Touring trims come with the SkyActiv 2.0-liter, while “s” versions of the Touring and Grand Touring have the 2.5-liter four-cylinder. The hatchback skips the base engine by starting at the Touring trim level, but 2012 marks the first year this body style is offered with a smaller engine — in SkyActiv form — rather than just the 2.5-liter. The Mazdaspeed3, available only as a hatchback, comes in Touring trim. Standard features on the SV sedan include power mirrors and windows, plus a CD stereo with steering-wheel audio controls and an auxiliary MP3 jack. Other trims add power door locks, air conditioning and keyless entry. Load the Mazda3 up, and you can get heated leather seats, Bose audio, dual-zone automatic climate control and a moonroof.

Mazda3 in the Market
Will shoppers buy the new SkyActiv versions of the Mazda3? I think so. The mileage gains are enough to take some of the sting out of the price difference in the sedan, and the engine effectively lowers the price of the hatchback by giving buyers a cheaper alternative to the 2.5-liter engine. Either way, the fuel-efficient 2.0-liter should be easy to find: Just over half of the Mazda3s listed in Cars.com’s new-car inventory are SkyActiv trims. In the past, the Mazda3 has outsold bit players in the commuter segment, but shoppers have preferred the Honda Civic, Toyota Corolla and Chevrolet Cruze — all by more than a 2-to-1 margin. Gas mileage has been a shortfall for the nimble Mazda3; I suspect the revamped drivetrains will narrow the divide.

March 30, 2021
By Douglas from Crossville
Owns this car

This car fits my lifestyle, not too big, handles well & good gas mileage. I also love the color, it's grey, so it won't show the dirt!

This is a sportier vehicle than I had anticipated but that's okay. Very smooth ride. I am still learning the smartphone compatibility features. I am loving this car!

Rating breakdown (out of 5):
1 person out of 1 found this review helpful. Did you?
Show full review
See all 80 consumer reviews 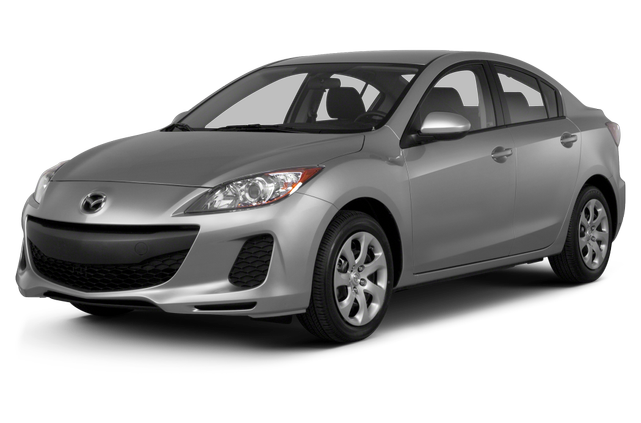 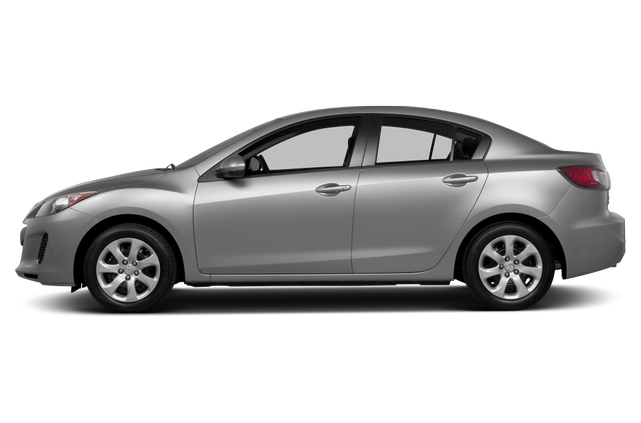 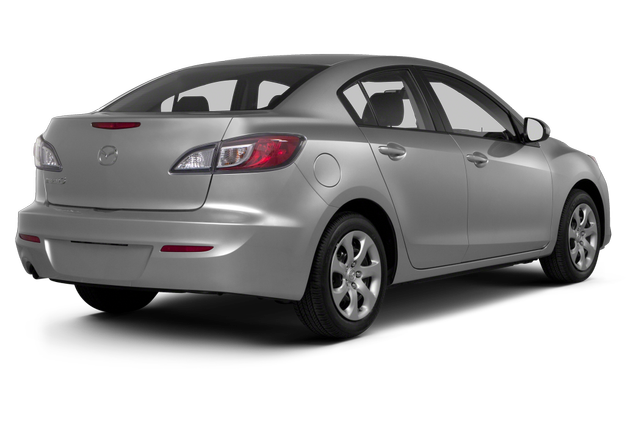 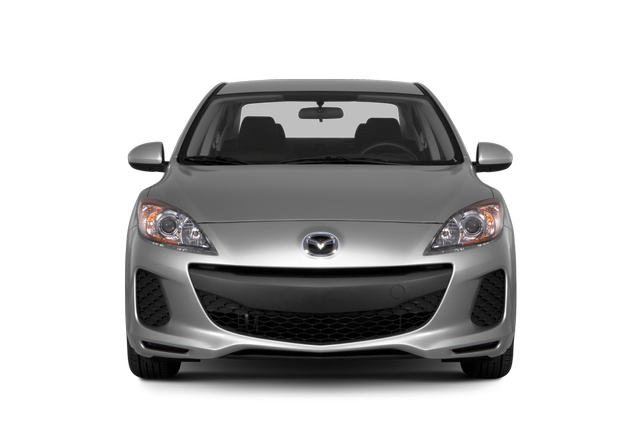 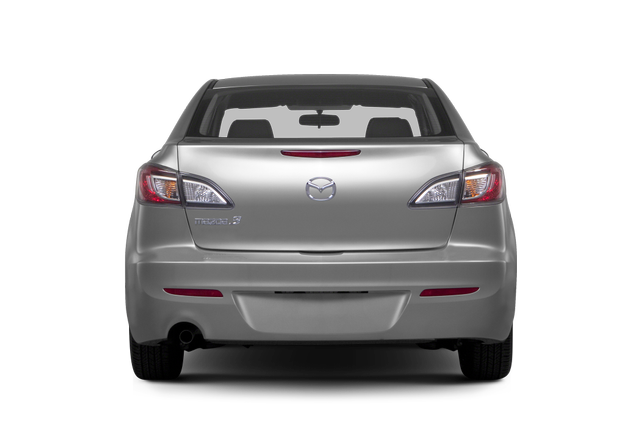 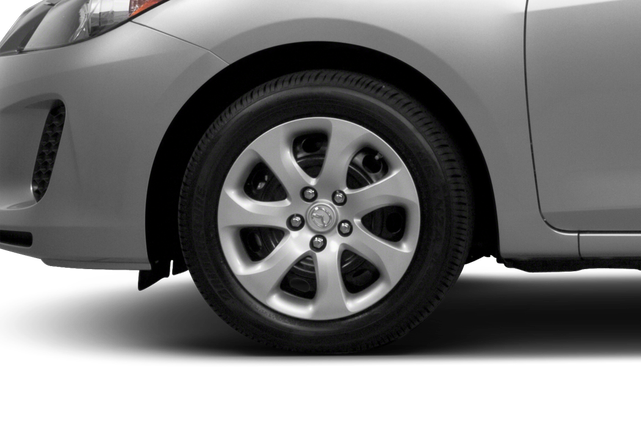 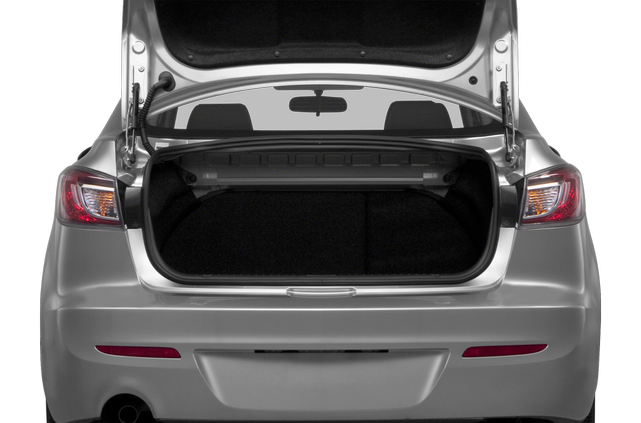 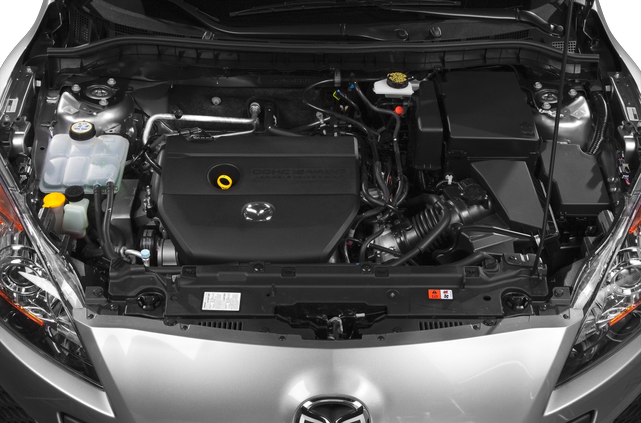 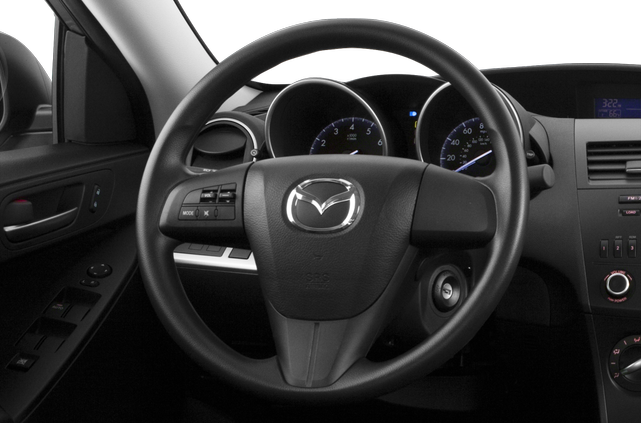 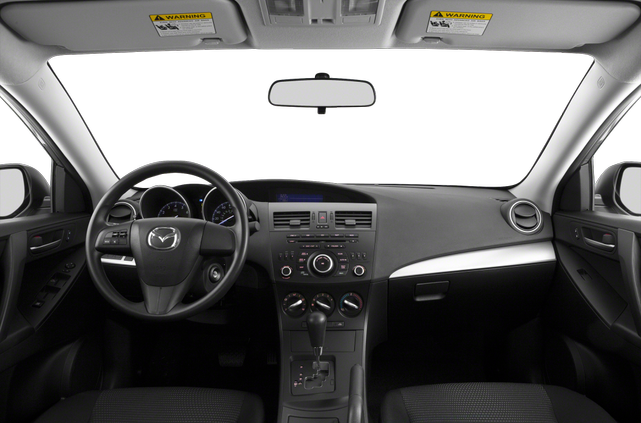 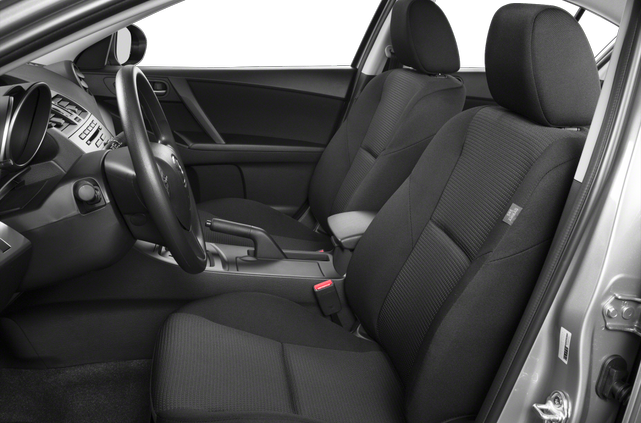 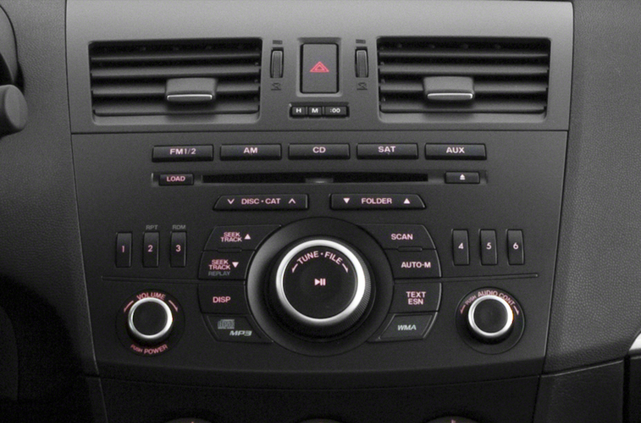 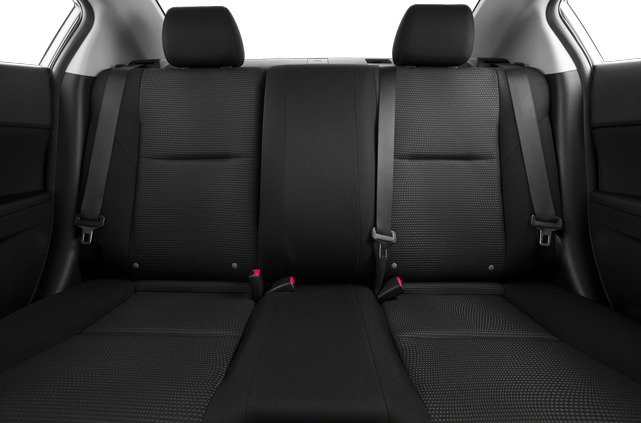 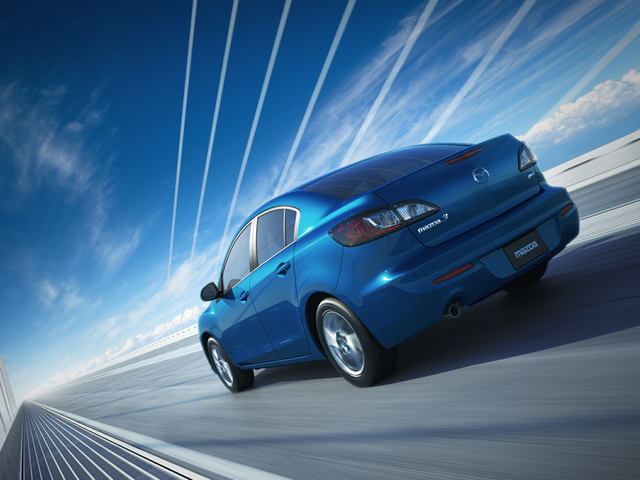 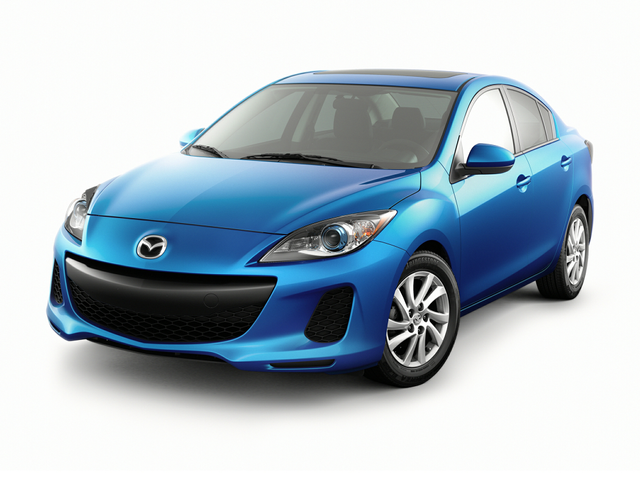 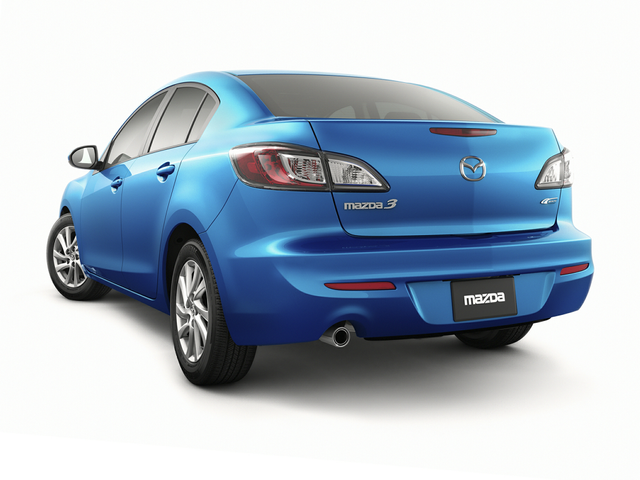 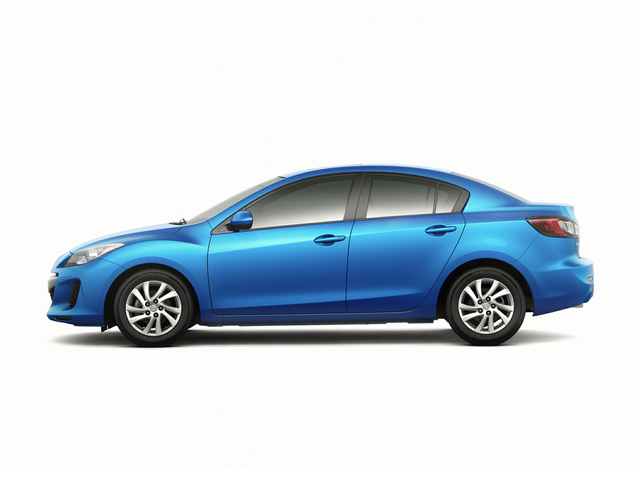 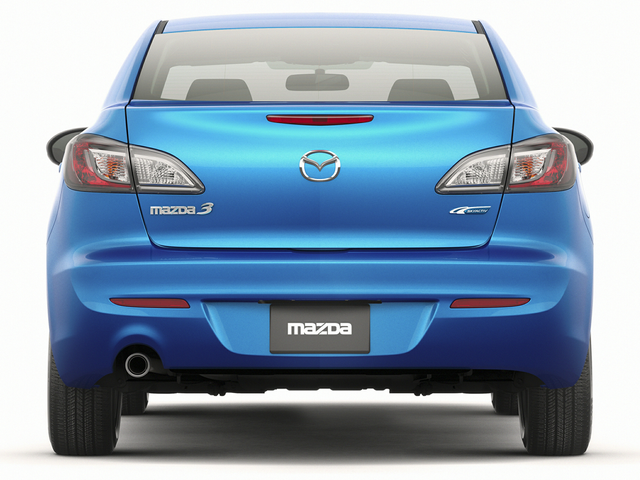 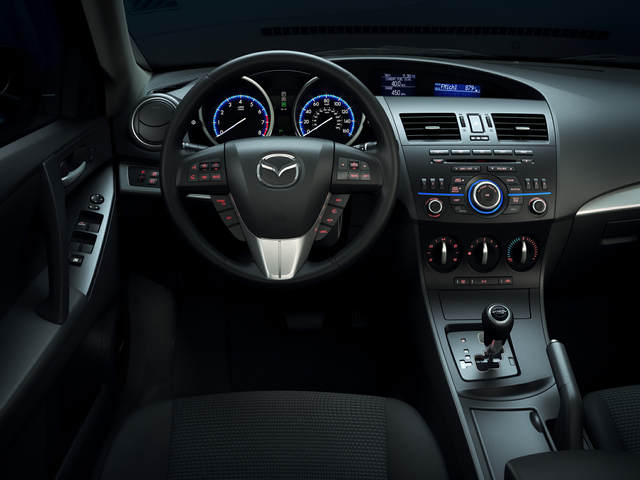 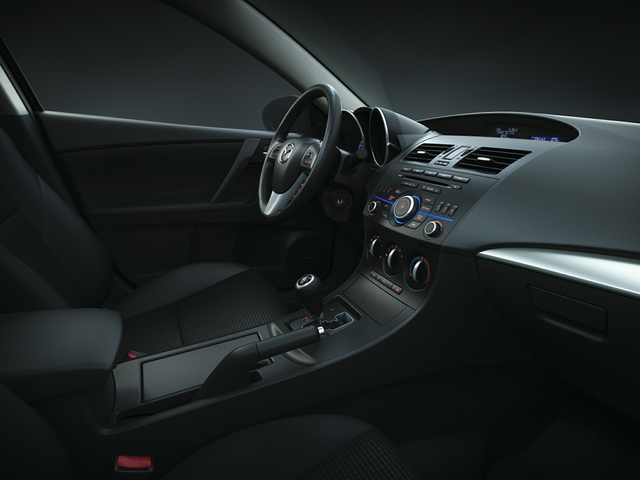