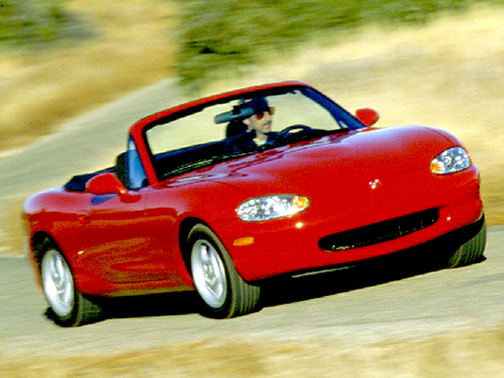 Our 1999 Mazda MX-5 Miata trim comparison will help you decide.

The tenets of most religions include at least two shared and powerful notions: rebirth and revelation.

Welcome to the House of the Two-Seat Sports Coupe, whose flock declined through the 1960s, ’70s and ’80s, but for whom rebirth and revelation came in 1989 at the Chicago Auto Show. For that is when Mazda introduced the Miata, and affordable, two-passenger ragtops became all the rage.

Today, 10 years later, more than 500,000 Miatas have been produced (half of them for the US market), and auto manufacturers in Europe, America, and Japan continue to play catch-up in this nifty little niche market.

That is because, down the decade, the Miata has proved to be just what its builder promised it would be: affordable, reliable, and, most of all, fun. There are more than 30,000 members of the Miata Club of America. Web sites for Miata enthusiasts abound.

Drive the Miata and you are reaching back in time to the old days of feel-every-bit-of-the-road sports car touring: snapping through corners as you sit low in the seat, upshifting and downshifting to translate power into control and control into power, waving to other top-down enthusiasts as you meet them on the road. It’s like the old days and the best of the MGs — without the shaky wiring of Lucas, Prince of Darkness.

To commemorate the success of this little sports car, Miata has produced the 1999 Tenth Anniversary Edition, a sapphire blue coupe with a light blue top and blue tonneau cover.

It is easily recognized by Miata enthusiasts and will stay that way because only 7,500 of them will be produced — 3,000 of which are for US sale. It has a lot of nice little touches that set it apart from the 1999 MX-5, but with the 140-horsepower engine at its heart, it is virtually the same automobile.

The 1999 body style is more muscular looking than past Miatas. There is a pumped up look to the slightly bulging front fenders — a look that continues back through the door lines, which rise from door to curved rear fenders. The raised lip on the trailing edge of the trunk adds to the look.

What the 10th anniversary edition has that the others don’t is a six-speed transmission, a delightful and snappy addition since the car has only 119 lbs./ft. of torque and the extra gears, particularly on the highway, keep it peppy moving through traffic. Fourth, fifth, and sixth, used judiciously while commuting in heavy, fast traffic on Interstate 93, are a useful combo.

Of course, straight-line commuting (with some traffic weave thrown in) is not the aim of most sports car manufacturers. Handling and corners are.

This special edition is set up as one stiff car for this purpose.

What this gives you is a stiff but sure ride.

Rip into a corner and you feel its pull in a way you don’t in, say, the BMW M Coupe. That is because nothing is being controlled by computer to make your drive easier. The driver defines the edge in the Miata.

Oversteer, understeer, too much gas, too much brake — they are all up to you to fix.

Discover, midway through the tight curve, that the road is not perfect — a crack here, a bump there — and you get that familiar hop, shake, rattle, or skip you might remember from the old days. It’s up to you to correct for it.

All of which makes driving this car fun, and you can see why people are so attached to their Miatas.

In the cockpit, all is simplicity. Five analog gauges are packaged tightly behind the steering wheel. Wipers and lights are on stems jutting from the steering column. Sound system and heat controls are in the center of the dash.

Because it’s a collector car, a special badge on the driver’s side front fender gives it a serial number and also its own number among the 7,500 to be built. This car was number 1744.

These 10th anniversary editions will surely find their place in the loyal congregation that is the cult of Miata, a gathering where Web sites offer essays and odes to the car and fictional goddesses write of their Miata experiences; where kinks and complaints and tips are shared by Miata owners; where debates rage on color, engine power, and Miata etiquette. There is, for instance, a Save the Wave campaign that urges Miata owners to follow two rules when encountering each other on the road: 1. Wave or flash headlights and 2. Smile.

One of the more interesting debates on the Web is a debate over power. This is, after all, no rip the road, roaring little car. It is adequately powered and fun and that is what it was meant to be.

Yet the supercharger and turbocharger backers get their say, as do proponents of a rotary engine for the Miata. One Web poll found 11 percent backing turbo- or superchargers; nearly half supporting more power, but only through normal aspiration. And significantly, a quarter said, “Leave it alone.”

“If you want more power, get a different car,” wrote one respondent.

“It’s not about power; it’s about fun,” concluded a third.

And that is a conclusion I agree with. This car was designed to be a bit of a throwback (with modern reliability thrown in) and the manufacturer ought to keep it that way. There are plenty of aftermarket solutions for those who want more kick to their Miata, and any move by the manufacturer to significantly pep up this car would surely result in a much higher cost than the $20,000 base for the regular 1999 Miata. The 10th anniversary edition, for instance, is $8,000 higher than that, and a more powerful engine would not only add to the cost, but so would the costs of the upgraded suspension that would be needed to handle the extra power.

— I’ve never seen a manual convertible top that is so simple (two quick clicks, no pulling and tugging) to put up and down.

— The die-cast model of your special edition Miata, the key ring, and the his-and-hers 10th anniversary Miata Seiko watches that come with this limited edition.

— I know it’s limited and will be snapped up by collectors, but $28,000-plus is getting away from the original purpose of the Miata.

— The rattling that the convertible top makes once it is stored behind the rear seats.

3rd owner with 104,00 miles I asked myself what am I doing buying this type of car? I have two other cars but this is the one I drive every chance I get. Cause its fun fun fun. Fast and Zippy , hugs the road thru the turns. Beautiful car, lots of stares!

June 30, 2020
By AlwaysTheAnswer from Baltimore, MD
Owns this car

Really an amazing car. Mazda just hit the mark for a fun to drive roadster without requiring sacrifice in terms of longevity, reliability or dependability. The handling is balanced and forgiving, while maintaining a reasonably comfortable ride. It has enough power and though it won't win a stoplight drag race it will embarrass much more powerful cars on a twisty road.

June 9, 2020
By Webers2 from Bridgeville, Delaware
Owns this car

Perfect Car. Great price too. We couldn't have been happier! Thank you Fitz Automart and team under Jeff S. Most likely we will return for future Mazdas. This is our first Mazda. 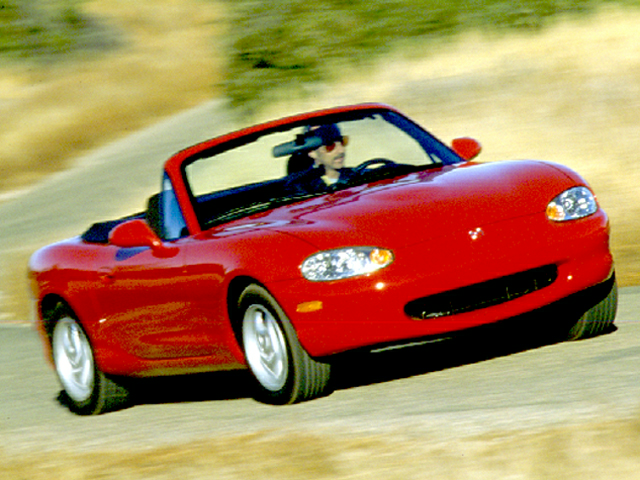 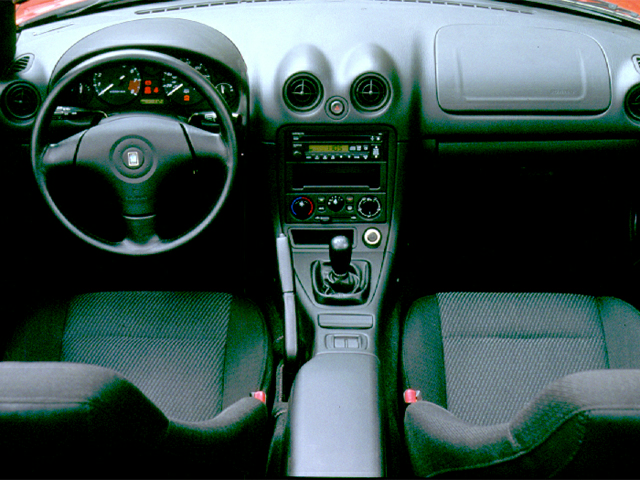