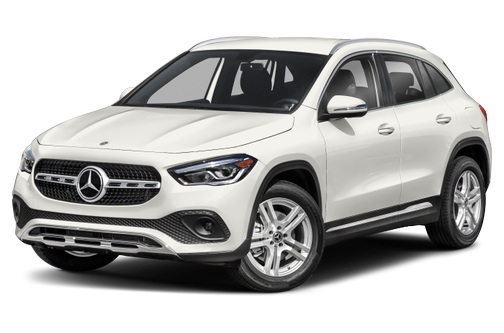 Our 2021 Mercedes-Benz GLA 250 trim comparison will help you decide.

The verdict: The new entry point into Mercedes-Benz’s SUV lineup is bigger and improved, but the 2021 GLA250 still features funkiness to its powertrain behavior that left me frustrated.

Versus the competition: Subcompact SUVs are a hot class, loaded with some from premium brands priced and equipped similarly, and some from non-luxury alternatives that put the Benz’s equipment list to shame, albeit with less brand cachet.

Mercedes-Benz does amazing things when the gloves are off and price is no object, but if you’re not a rock star, captain of industry or a professional footballer, you’re more likely to be looking at the entry-level stuff. Small crossovers now comprise the class Mercedes-Benz is using to lure first-time buyers into the brand, hoping to hook them for life and multiple purchases over subsequent decades — and that means you’ll quite likely be starting with this model: the redesigned 2021 Mercedes-Benz GLA250 subcompact SUV.

It’s related to the other A-Class models from Mercedes-Benz, such as the A-Class sedan, the CLA-Class four-door coupelike sedan and even the slightly larger GLB-Class SUV in that it shares its engines, transmissions, chassis and other bits among the various models. That’s good in some ways and bad in others. Let me show you what I mean.

The 2021 GLA250 sits on a new platform, is a bit taller than before, a bit wider, a bit more SUV-like and a little less carlike in its styling. That’s helped out inside by creating more occupant room, but it’s also made for questionable exterior styling choices. Its styling is front-heavy, with a short, truncated rear and standard 18-inch wheels that make it look like a stereotypical crossover; if not for the three-point star on the grille, this could be a Hyundai, Mazda, Infiniti or any number of other brands. Distinctive and portraying the soul of a luxury brand, it is not.

But it’s not offensive, either. The lines are clean, nothing looks out of place, and aside from the odd proportions from being a front-wheel-drive crossover, it isn’t too awkward — it’s just not all that exciting. You can make it much more interesting by specifying some AMG styling packages that add visual interest and zing to the details, but that starts the dangerous game of watching the sticker price quickly climb beyond an entry-level idea. If your goal is to get into your first Mercedes-Benz without breaking the monthly budget or requiring a co-signer, you’ll have to go lightly on those optional extras. Styling bits that come standard with the GLA250 are full LED headlights and taillights, but that’s about it. Looking extra-good is going to cost you extra money.

Given that the GLA250 shares a lot of what’s under the skin with other A-Class-related vehicles, there’s nothing surprising in terms of its powertrain. Propulsion is provided by the same turbocharged 2.0-liter four-cylinder engine we’ve tried in other small Benzes, making a capable 221 horsepower and 258 pounds-feet of torque, which proves to be plenty for moving the front-drive GLA250 around town and on the highway. It’s peppy and plenty quick, with the turbocharger building boost rapidly and creating a brisk acceleration when called for.

The problem is the eight-speed dual-clutch automatic transmission that’s slow to engage, making low-speed driving tedious and difficult to accomplish smoothly. The accelerator pedal feels as if it’s connected to the car via rubber bands; its action does not feel linear to the acceleration, usually resulting in pushing the pedal farther than needed and causing passengers’ heads to bob as the GLA suddenly takes off. It becomes even more noticeable when quickly turning a tight corner from a standing stop, such as pulling out of a driveway onto a busy street. That nonlinear feel caused by the transmission clutch engagement lag will suddenly send power to the front wheels, causing torque steer (a tendency to pull right or left during acceleration) and often breaking the tires loose before the traction control can catch up, if it even does engage. All-wheel drive can mitigate torque steer and breakaway tire spin, but it’s a $2,000 option. It’s the exact same behavior I’ve encountered in every A-Class-platform vehicle from Mercedes-Benz, and it disappointingly detracts from what is an otherwise excellent driving experience.

And the GLA250 really is an otherwise excellent experience. The ride is well damped and controlled, although the handling sharpness of this basic GLA250 with its 18-inch wheels and tall-sidewall tires is angled more toward relaxed driving than spirited activity. The steering feel is light but can be firmed up in effort by switching into Sport mode using the drive mode selector. Body control is good, without any tippiness or odd motions that aren’t related to the transmission’s foibles.

On smooth pavement, the cabin is quiet even at highway speeds. But when that pavement turns bumpy, quite a bit of road noise can enter the occupant space. Overall, the GLA250 feels easy to drive, solidly built and unchallenging in daily operation, but it’s not particularly athletic or sporting. Again, some AMG options can change that for you, such as an electronically adaptive suspension and low-profile wheels and summer tires, for an additional cost. Or if you really want a more athletic machine, two AMG variants also will soon be available: the Mercedes-AMG GLA35 and GLA45, both with much more powerful engines, aggressive suspensions, more electronics aimed at going faster and, of course, a higher price tag.

The GLA250 is relatively fuel-efficient, at least, with an EPA rating of 25/34/28 mpg city/highway/combined. My few days of driving around town and some limited highway jaunts returned an average of 27 mpg, slightly below the combined average and well off the highway mileage rating, but a heavier foot than normal may have been the culprit.

You’re Seated in the Business Class Cabin, Not Quite First

There will be compromises in your surroundings when you’re only spending an as-tested $41,000 and change on a new Mercedes-Benz. Perhaps the most egregious one is that you’re still getting standard vinyl seats (MB-Tex, as Mercedes-Benz calls it) despite the money you’ve already shelled out. It’s certainly decent vinyl and does come in four different color options at no cost, but it’s still not real leather like you’d get in an Audi Q3; it’s more comparable with the standard upholstery in a BMW X1 or Lexus UX200. Leather is optional, but it’ll cost you $1,450 to drape the chairs in cowhide.

It dampens one’s enthusiasm for what is otherwise a premium cabin with the same quality controls, switches, panels, design, materials and technology you’d find in bigger, more expensive Mercedes-Benz models. None of the plastics feel cheap and nothing rattles or fits oddly. Everything from the climate control switches to the stalk-mounted transmission gear selector feel just like they do in a $100,000 GLS-Class SUV. The upgraded multimedia system is the latest Mercedes-Benz User Experience system with the optional dual 10.25-inch screens for the central display and the instrument cluster. The optional navigation system features the same augmented reality function as the larger, more expensive Benzes, as well as the same voice-activated “Hey Mercedes” digital concierge to help you control all of it. Sadly, it also includes the same infuriating touch-sensitive controllers on the steering wheel that are easy to accidentally trigger when simply resting hands on the spokes.

The GLA250’s interior is decently comfortable too, if a little cramped. Front-seat occupants have plenty of room to stretch out in every dimension with plentiful width to the cabin, lots of legroom and a surprising amount of headroom — my test vehicle did not have the optional panoramic moonroof, however. Second-row passengers have more room than they did before, but it’s still a subcompact crossover, so don’t go in expecting limousine levels of backseat space. It’s good enough for four people to go across town, however, aimed as it is at both young couples who are pre-kids and empty nesters who’ve finally shed theirs. It feels more spacious than many competitors in this category, and the second row is actually a comfortable place to sit.

Cargo space behind the second row is acceptable, and the second-row seats fold mostly flat to create plentiful room for hauling stuff if you don’t need to haul people. When those seats are in their upright position, however, the rear-seat head restraints do block a good bit of the rear window — they don’t seem to descend into the seatbacks as completely as they should. That’s the only bit of obstructed view because the upright driving position and large windows provide a good view out to the front and sides.

With a starting price of $37,280 (including destination fee), the GLA250 is the SUV entry point into the Mercedes-Benz brand and is competitive with other luxury brand entry-level SUVs. The GLA250 isn’t a bad way to get your feet wet on the road to a potential lifetime of three-pointed-star brand ownership. It’s a comfortable and competent premium luxury product that will likely end up as a lease vehicle in a lot of driveways throughout the more affluent neighborhoods of the U.S.

My front-wheel-drive tester stickered at a fairly accessible $41,620 and had convenience items like the big digital displays, navigation, ambient lighting and keyless entry, but it’s possible to add more than $20,000 in options to a basic GLA250 if you really want to go nuts with all the bells and whistles. Its as-tested price offers an acceptable level of features for the money, but the lack of a leather interior falls short of the full luxury moniker. Another couple of grand in options wouldn’t likely affect a monthly lease payment that much, and it would considerably up the niceness quotient of the interior. What you’d end up with is a miniature version of Mercedes-Benz’s larger, luxurious, technology-packed SUVs, albeit one that still has wonky transmission behavior that makes it slightly tricky to drive in low-speed conditions.

Choosing the GLA over the larger, more comfortable and only slightly more expensive GLB250 is really more a matter of finding a vehicle in the lineup that suits your needs. The GLA is meant to be the sportier, more compact alternative, while the GLB is the more traditional, boxier, cargo-and-kids-carrying small SUV. You’ll soon be able to get two AMG versions of the GLA, but that’s strangely not (yet) the case for the GLB. So if your desire to have a Benz SUV in the driveway is strong but you’re still not at the level of the independently wealthy, the GLA250 provides a fine introduction to the lifestyle.

This all wheel drive Mercedes-Benz GLA250 SUV in medium tone blue color is perfect for my wife, small yet powerful enough to safely travel the road.

June 9, 2021
By Jackie from GREENVILLE
Owns this car

I used to own a Lincoln mkc and got more features for the money. However love the exterior style of GLA and hey mercedes technology.

Been awhile since i have owned a Benz. I have had 2 decades of BMWs and what brought me back to Benz was the exoerience of having driven a rented one through most of Spain and Portugal for 2 months. I began to love the brand again, as my interest in BMW's waned due to its very boring interiors. I selected a GLA 250 given its eurosize and jackrabbit turbo performance. Never failed me, my only compaint: a small fuel tank which has me refuelling more often and a spotty CarPlay app that seems to malfunction with Spotify but not with the other music apps. Overall am a happy owner, now hoping tht MBenz service in Vegas has improved.

All model years for the Mercedes-Benz GLA 250