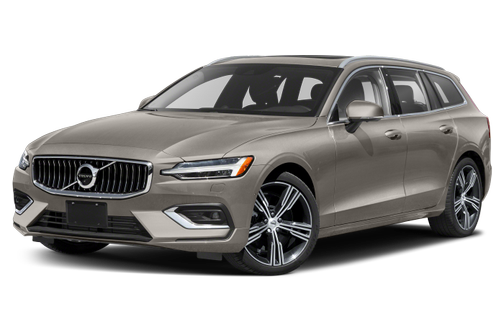 Our 2019 Volvo V60 trim comparison will help you decide.

The verdict: Like the XC60 SUV and Volvo’s larger 90-series cars, the redesigned V60 wagon emphasizes design and technology over driving refinement.

Versus the competiton: Unlike its sibling, the S60 sedan, the V60 competes in a tiny class of smallish luxury wagons whose shoppers likely care less about drivability than they do quality and practicality — areas in which the V60 comes up strong.

The V60 shares a lot with the S60 sedan and XC60 SUV, but as of now, it won’t have a range-topping T8 plug-in hybrid variant. It will, however, reprise a jacked-up Cross Country variant for the 2020 model year.

With optional adaptive shock absorbers, 19-inch wheels and low-profile P235/40R19 tires — all equipped on our test car — the V60’s ride is controlled over ruts and sewer covers, but isolation is a different story. The chassis feels busy over all but the smoothest roads, with noticeable reverberation as the suspension resettles after rapid elevation changes. Smaller wheels (17s or 18s are available) and their taller-sidewall tires might improve things, and you might also want to drive the standard fixed-rate shocks to see how they affect things. Volvo also offers a Sport Chassis with firmer springs and shocks, plus a half-inch-lower ride height, but that setup made for an objectionably firm ride in an S60 we also drove.

Sport Chassis or not, there’s little handling payoff to justify the V60’s ride-comfort gremlins. The steering has numb feedback and a slow overall ratio, and the all-wheel drive does little to hide the platform’s front-biased layout. Apply enough gas through a corner, and the V60 sends a little more power rearward to nudge the tail and reorient the axis. But it’s far from the balance you get from true, rear-drive-based AWD or even front-drive-based systems with more proactive power distribution. Volvo’s system may improve cold-weather traction, but it does little for all-weather handling.

With 316 horsepower and 295 pounds-feet of torque, the T6 moves vigorously once all systems are go, but noticeable accelerator lag and a lazy automatic engine stop-start system delay movement until a few moments after you hit the gas. (You can permanently disable the idle-stop, at least.) Depress the pedal for highway passing power and the V60’s standard eight-speed automatic transmission lags too long before initiating a downshift. A selectable Dynamic driving mode does little to lessen it.

Volvo says the V60 T6 hits 60 mph in 5.5 seconds versus 6.5 seconds for the T5 engine (250 hp, 258 pounds-feet of torque). Those numbers bookend manufacturer-stated acceleration times for the rival BMW 3 Series and Audi A4 wagons, each of which have one drivetrain. Polestar tuning, available as an accessory package on the V60, adds incremental power to the T5 or T6 via software changes.

Familiar, Outside and In

Some 5 inches longer than its predecessor but still about 7 inches short of Volvo’s largest wagon, the V90, the V60 follows the S60 sedan and XC60 SUV with horizontal lines and sleek Thor’s hammer headlights. Inside and out, the family resemblance means you might mistake a V60 for a larger V90. Both wagons carry themes similar to what Volvo introduced with the current XC90, Cars.com’s Best of 2016 recipient. Given how well Volvo’s current styling has aged, I’m glad it stayed the course.

The V60’s cabin features the same tech-focused minimalism of Volvo’s other cars. The automaker’s now-familiar 9-inch vertical touchscreen is standard, as are Apple CarPlay and Android Auto. Volvo puts too many functions onscreen rather than having separate physical controls — I’d prefer a dedicated tuning knob and separate climate dials, for example — but the menus are intuitive and touchscreen response is fast, bolstered by a faster processor for all 2019 Volvos.

Some of our editors bemoaned the prominent center console that’s native to the S60 and V60, which has decent storage provisions but space-inhibiting bulk. It’s also shod in hard plastic, not the padding many cars now employ — a letdown among otherwise good cabin materials.

The backseat has decent legroom but a low seating position for adults — yet, despite that, only modest headroom below the standard panoramic moonroof. Still, available amenities abound: Outboard passengers can get their own heated seats, plus climate control with air vents on the back of the center console and B-pillars. One more traditional Volvo convenience: Drivers can flip down the backseat head restraints via the touchscreen, a boon for rear visibility. Parents of small children, meanwhile, should note the V60’s top scores in Cars.com’s Car Seat Check.

Volvo reports 23.2 cubic feet of cargo space behind the rear seats. Manufacturer-reported cargo specs can be unreliable, but our measurements indicate legitimate space. The V60 can’t match most SUVs for cargo height, of course, but floor dimensions behind the backseat eclipsed those same measurements among all seven contenders in Cars.com’s 2018 Luxury Compact SUV Challenge. The V60 boasts a big, square space with easy-to-fold seats and minimal floor gaps when they’re down.

The T5 Momentum starts around $39,000 including destination charge, or about $3,000 more than a base S60 sedan. Crash tests were unavailable as of this writing; if it is tested, the V60’s results should appear on the Insurance Institute for Highway Safety’s mid-size luxury cars page. Forward collision warning with automatic emergency braking, lane departure warning with steering assist, and a drowsy-driver detection system are standard. So are power front seats, a panoramic moonroof, dual-zone climate control and cloth-and-vinyl upholstery. A factory-loaded T6 Inscription, meanwhile, will set you back a little over $60,000. At that level, equipment ranges from heated and ventilated massaging front seats to Nappa leather upholstery, Bowers & Wilkins audio and Volvo’s optional Pilot Assist system, which pairs adaptive cruise control with lane-centering steering that works all the way to a stop.

Volvo’s pricing represents a slight value versus wagon versions of the BMW 3 Series and Audi A4 — especially at the low end, where both competitors start thousands higher. Shoppers looking for a value alternative might also consider the semiluxury Buick Regal TourX.

The V60 is no half-step-down choice. It has many of the same qualities that helped the XC60 win in the luxury compact SUV comparison; thing is, that XC60 beat the field despite lackluster driving refinement. SUV shoppers might look past such drawbacks more than would shoppers considering the S60 sedan. The V60 falls somewhere in between, I suspect. If the wagon crowd still leans more toward utility and practicality than outright drivability, the V60 is an option worth considering.

June 6, 2020
By Jennifer from Riverview, Fl
Owns this car

The evolution of the S60 continues. My T6 AWD model is also equipped with a super charger. Yea, it'll pin you back in the seat. You think your doing 80, nah, your over 100. Very smooth ride. Handling is excellent. Love the elegant luxury look of the car, while maintaining the look of a sports car too.

The car is great! The model is vastly improved from the previous model we leased. The comfort and driving is vastly superior and the technology is very user friendly!

All model years for the Volvo V60