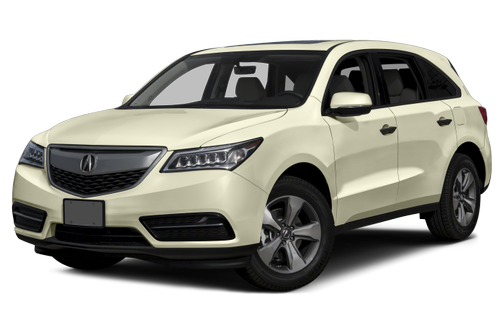 Our 2016 Acura MDX trim comparison will help you decide.

A fully loaded 2016 Acura MDX was impressive when chauffeuring around my own children and a few others, but was more pleasantly surprising when I pushed its performance on solo drives.

When it comes to luxury SUVs for families, the seven-seat Acura MDX has been a favorite almost since the day it went on sale. Redesigned from the ground up for 2014, the 2016 MDX gets a new nine-speed automatic transmission and a few other minor changes in what was already widely considered the top of its class. You can compare the 2016 and 2015 models here.

Exterior & Styling
Acura’s design is certainly modern, and on this large of a vehicle it looks quite handsome. The MDX won’t stand out in a parking lot or school loading zone, but the row of LED headlamps does set it apart slightly.

The Dark Cherry Pearl paint scheme and beige interior of the 2016 Acura MDX I tested was a bit classier than the all-black 2014 model with black interior I evaluated previously.

Eighteen-inch alloy wheels are standard on both front- and all-wheel-drive models, and there are two variations of optional 19-inch wheels. Which you get depends on the option package you pick, Technology or Advanced.

How It Drives
A 290-horsepower 3.5-liter V-6 engine pulls the three-row SUV away from stops with plenty of speed. Whether you’re on your daily commute solo or fully loaded with people on the weekend, the MDX never seems to lack power.

The new nine-speed transmission feels refined and shifts quickly — and often, considering how many gears it has to choose from. The gear selector itself is an odd duck, with push-buttons for Park and Neutral and another that cycles between Drive and Sport modes. The Reverse button, though, is placed in such a way that you must pull back on it to activate, similar to the up position for most power-window switches. It’s placed this way to avoid inadvertent shifts into Reverse, but it is awkward at first. After a few days, though, I got used to it. Also, the differing locations and button positions for Reverse and Drive make them easier to locate without looking down.

Push the D/S button while in motion and the MDX goes from Drive to Sport mode. Once Sport is engaged, one of the otherwise quietest vehicles I can recall testing comes to life, the engine roaring from ahead of the cabin with a snort that surprises.

This is a vehicle where Sport mode truly makes a difference, especially when using the paddle shifters. With the engine revving higher in the rpm range, I took a curving highway on-ramp with some actual giddiness — and then was even more surprised at how precise the steering was.

Somewhat floored by that single burst of excitement, I paid more attention to everyday driving situations afterward. It’s easy to take the MDX’s performance for granted when you’re absentmindedly cruising around suburbia, but it truly is one of the best performers in this class of luxury SUVs, which includes the Infiniti QX60, the Land Rover LR4 and the larger Buick Enclave. You can compare all four here.

An engine stop-start function is included on top-of-the-line models with either MDX drivetrain, raising both city and combined mileage by 1 mpg (mpg hwy was unchanged), according to EPA estimates.

Interior
The MDX’s shorter length means its third-row seat is somewhat small, giving up 3.4, 5.8 and 8.9 inches of legroom against the QX, Enclave and LR4, respectively.

However, many shoppers use the third row seating sparingly; I only needed it when I ferried my teenage niece and nearly teenage nephew, along with my own child-seat-bound 5- and 7-year-olds, around suburbia. The tallest, my niece, climbed into the third row rear seat and found it not as spacious as her parent’s Enclave, but gave it an OK rating; for the 30 or so minutes she was detained back there, she had no complaints. Everyone else fit rather easily across the second row.

The 60/40-split second row also slides forward and back to give more room to third-row passengers. There is no captain’s chair option for the second row, however — something many families prefer.

While my young passengers were comfortable, mom/aunt and dad/uncle in the front were even more so. Interior dimensions up front are on par with or exceed the three SUV competitors mentioned above. The leather seats are plush, and the lighter beige interior of our test car added a welcome brightness to the cabin.

Ergonomics & Electronics
Honda and Acura both use a dual-screen system for multimedia and navigation, which is equal parts innovative and frustrating. There’s big type on both screens and large shortcut buttons around a central control knob, allowing for easy access to the various functions and menus.

While most functions that display on the upper screen, near the top of the dashboard, are easily operated, using the lower touch-screen to control things like the radio is laborious.

One thing that is exceptionally easy to use is the optional rear entertainment system. There’s a 9-inch rear screen in the Entertainment Package, but if you add the Advance Package, which our test car had, there’s a 16.2-inch widescreen monitor and DVD player — no Blu-ray here — that can be operated by the driver or rear passengers. Insert a disc, hit the play button and you’re in business. It’s a much simpler interface than I’ve found with other rear systems.

The Acura MDX’s system comes with wireless headphones, but you can also play the sound through the optional 10-speaker surround-sound system. In fact, along with the wider screen, Acura throws in two more speakers, in the ceiling, for 12 total, to enhance the experience for rear passengers.

The quality of the surround sound is as good as any home theater system I’ve experienced, making it almost a movie-theater experience for kids in back. Parents do have to set the sound so they can hold a conversation up front, but it would be hard to deprive the kids of the experience.

There are also multiple inputs for HDMI and video, so one side of the screen can display a movie and the other can show a video game system, if it’s plugged in. No more arguments from the back on long road trips … at least regarding entertainment.

Cargo & Storage
Because of the Acura MDX’s somewhat smaller dimensions in this class, you’d think there would be compromises in cargo room, but that’s not the case. I drove the MDX around almost entirely with the third-row seats in place and didn’t find a real need to lower them for routine shopping trips. I was able to fit two large bags of dog food, a case of wine and a few other shopping bags in that truncated space quite easily.

I personally couldn’t imagine many families needing more room, but I routinely hear from shoppers in this class that they find the Acura MDX too small.

I did wish the cargo floor itself were a little lower, so younger children could access it more easily when grabbing sports gear, or for a smoother entry for four-legged family members.

Inside the cabin, there are plenty of places to stash gadgets, drinks, small bags and all the other items families accumulate.

Safety
Acura’s safety pedigree is apparent in the MDX. The 2015 earned a five-star overall crash-test rating from the National Highway Traffic Safety Administration, and Top Safety Pick Plus status from the Insurance Institute for Highway Safety, which is the highest designation that organization assigns.

A slew of advanced safety features are available for Acura vehicles, most of them in an optional AcuraWatch Package for $1,500, which is also included in the Advance Package. AcuraWatch includes adaptive cruise control, forward collision warning with autonomous braking, lane departure warning and lane-keep assist, a blind spot monitoring system, a multi-angle backup camera and rear cross-traffic alert.

Each of the safety features I experienced during my test worked as one would expect, with the proper amount of sensitivity, keeping unnecessary alerts from sounding. Rear cross-traffic alert is one safety technology I’ve found myself appreciating on a day-to-day basis. Like other models equipped with it, the Acura MDX senses when a car is approaching on a perpendicular path when you’re backing up. This is most often helpful in parking lots, but it saved me even when backing out of my driveway, which has good visibility to the street. Sometimes cars just go faster than they should in my neighborhood, it seems.

Value in Its Class
Whether I’m at the office, spending time with my family or on social media, I frequently get asked for advice on the MDX and its competitors. Some people want to know if it’s worth moving up from a non-luxury three-row, or they’ve already made up their mind and just want to know which is the best luxury three-row.

At $43,785 to start, the MDX is well-priced — a little bit higher than the QX and a little bit lower than the Enclave. Most buyers will move up to the Technology Package, with upgraded stereo and navigation pushing the price to $48,100, including a destination fee. Those prices are with front-wheel drive; the SH-AWD trim costs an additional $2,000.

Staring at $50,000 isn’t easy, but it’s the price of admission for the features most shoppers are looking for in this segment, and Acura isn’t charging a premium versus the rest of the class.

It would be hard to say there’s a better all-around choice than the Acura MDX, unless you’re looking for that added room. Some buyers might feel the MDX is too small, but I don’t see it; I’ll keep recommending it to the families who keep asking about it.

A big thank you to Anthony Belita thank you

May 6, 2021
By Markola from Bloomington, MN
Owns this car

My wife wanted a luxury SUV and so wanted reliability and great performance I’m Minnesota snow. We agree this is the best vehicle we have ever owned. Also, Bloomington Acura provides a superb, flawless experience every time we visit for oil changes.

Rating breakdown (out of 5):
0 people out of 0 found this review helpful. Did you?
Show full review
See all 114 consumer reviews