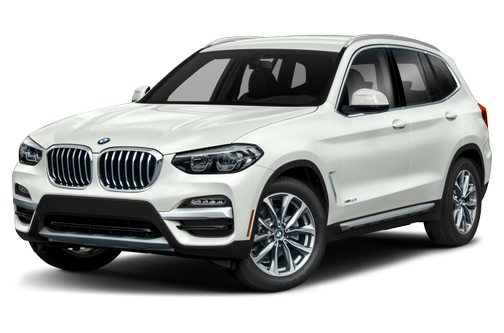 Our 2018 BMW X3 trim comparison will help you decide.

The verdict: The redesigned BMW X3 is a refined luxury SUV, but the biggest case against it might be another model in BMW’s showroom.

Versus the competiton: The X3 boasts decent quality and drivability in a bustling class of compact luxury SUVs, but the more affordable X1 could be the X3’s undoing.

Redesigned for 2018, the BMW X3 has standard all-wheel drive and comes in four-cylinder (xDrive30i) and six-cylinder (M40i) configurations. We drove a well-optioned X3 xDrive30i.

The new X3 is decluttered versus the 2017 model, emulating the smaller X1 — a handsome place to start. Three bumper openings replace the prior four, with lighting elements in the outboard units instead of last year’s separate foglight dimples. Styling is subjective, of course, but I suspect this will age well — unlike the first- and second-generation X3s, which struck me as too busy-looking.

Exterior dimensions haven’t changed, but the wheelbase is 2.2 inches longer. Eighteen-inch alloy wheels, LED low-beam headlights and dual tailpipes are standard. So is dark lower cladding that brings a durable, go-anywhere look; that’s a check the BMW X3’s 8 inches of ground clearance should be able to cash. The M40i swaps that cladding for body-colored ground effects, though an optional M Sport Package on the xDrive30i emulates much of the look for less cash. You can also get adaptive headlights, LED high beams and wheels up to 21 inches.

A poky eight-speed automatic transmission holds back an otherwise strong driving experience in the X3 xDrive30i, whose 2.0-liter turbo four-cylinder makes 248 horsepower and 258 pounds-feet of torque. It’s a capable engine with broad power that comes early and stays late. That’s much needed, as the transmission resists downshifts in its normal driving mode until you push the gas hard. (A Sport mode helps by holding lower gears longer, but it does so inconsistently.) But even absent a downshift, the xDrive30i has enough low-rpm muscle to maintain highway speed with multiple occupants aboard.

The SUV’s rear-drive roots reveal competent balance if you push it hard, but numb steering and modest body roll don’t encourage spirited driving. Sport mode shores up some of the body lean and relaxes power-steering assist to improve feedback through the turn, but the initial numbness remains. On the flip side, at least ride quality is strong. With its optional adaptive shock absorbers, our xDrive30i had a degree of sophistication that’s rare for this class — better than the unsorted Volvo XC60 and busy Lexus RX, and quieter on broken pavement than the Audi Q5.

If you want something more hardcore, the X3 M40i employs a turbocharged 3.0-liter inline-6 (355 horsepower, 369 pounds-feet of torque). BMW says it hits 60 mph in a scant 4.6 seconds, versus 6 seconds flat for the xDrive30i. The M40i also gets higher-performance suspension tuning, plus a litany of hardware that’s optional on the xDrive30i: a performance steering ratio, upgraded brakes and AWD that sends more power to the outside wheels during corners. (Numb reflexes and all, our xDrive30i test car had those options.) Adaptive shock absorbers are also optional on the M40i.

EPA-estimated fuel economy for the xDrive30i is 22/29/25 mpg (city/highway/combined), which is competitive with the class. Over some 360 miles of mostly highway driving, I hit the highway rating on the dot. The M40i sacrifices 2 mpg across the board. Like most German luxury models, all versions of the BMW X3 prefer premium gas. Competitors like the RX and Cadillac XT5 are less efficient but run fine on the cheap stuff. It’s a toss-up.

The new X3’s cabin follows BMW’s norm, with a mashup of stacked controls below a tablet-like screen that floats above the center air vents. Storage provisions are good, and handsome materials adorn all eye-level areas, with an optional stitched vinyl wrap on upper sections of the dashboard and doors. Still, grainier finishes and unpadded surfaces sit below elbow level — on par with most competitors, though the Mercedes-Benz GLC-Class and XC60 feel a cut above.

Power-adjustable front seats and vinyl upholstery, which BMW calls SensaTec, are standard. Leather is optional, as are heated and ventilated front seats and heated rear seats. The seats are comfortable overall, with good headroom in both rows despite our test car’s optional panoramic moonroof (a feature that typically cuts overhead space). Chunky grab handles on the front doors invade outboard knee space, and adults in back may find their knees uncomfortably elevated because the bench sits so low to the floor. Overall legroom in back is merely so-so.

HD radio, Bluetooth and a 6.5-inch display with a backup camera — but not a touchscreen — is standard. Some more premium package options include a 10.3-inch display that works via touchscreen or BMW’s iDrive system controls. You can also get wireless Apple CarPlay, BMW’s newfangled gesture control, a 12.3-inch digital instrument panel, LTE in-car Wi-Fi and a bevy of device compatibility (smartphone and smartwatch apps, plus Amazon Echo integration). Despite all this, Android Auto is unavailable.

The X3 has yet to be crash-tested, but forward collision warning with automatic emergency braking remains optional, not standard. That’s an important safety provision that’s widely standard in the class; it’s even standard on a $16,530 Toyota Yaris. BMW needs to get with the program. Other options run the semi-autonomous gamut, from lane-centering steering to adaptive cruise control. Both systems can work all the way down to a stop, though the steering feature requires periodic driver inputs; it isn’t hands-free like Cadillac’s Super Cruise.

Shopping the X3 M40i? Have at it. We haven’t driven the high-performance X3, which starts in the mid-$50,000s and runs to about $70,000 with all options; it gives enthusiasts an alternative to the Audi SQ5, Mercedes-AMG GLC43 and others of that ilk.

But I suspect most X3 shoppers want the xDrive30i, which accounts for some 85 percent of the 2018 model-year X3 inventory on Cars.com as of this writing. It starts around $43,500 and tops out in the low $60,000s with a full slate of factory options. That’s in line with competing, base-engine luxury SUVs. Just look around the showroom first.

The X1 runs from the mid-$30,000s with similar standard features (albeit optional AWD) to the low $50,000s with a slew of options. Luxury cars have a way of playing up the numbers, but the X3 is not automatically better. Its smaller sibling gives up some front-seat comfort but repays it in back, with a higher seating position plus an optional reclining and sliding backseat. Cargo space and acceleration are comparable, as is cabin quality. The X1 rides notably firmer with no handling payoff to show for it — its weakest point, to be sure, but something I doubt will rankle many SUV drivers in practice.

Seldom does a class beg you to upgrade more than subcompact SUVs do. They seem to want you to opt for their larger, compact siblings — even among luxury brands. The X1 is the exception. It’s a remarkable SUV in an unremarkable class, and it gives X3 shoppers a compelling alternative at substantial savings.

I am new to BMW and so far I am loving it, especially the way it handles the road and the overall comfort of the car

My second X3 and love it more than the first!I especially like driving in the sport mode. Great feel and ride and the gas mileage stays about the same.

Beautiful smooth riding inside and out

This car met all my needs. Comfortable, roomy, classy,sporty and much more than expected. After purchasing the 430i I switched to the x3 best decision I ever made....

October 9, 2019
News
What Should I Know About Car Shopping for Christmas?

All model years for the BMW X3