Our 1992 Buick Park Avenue trim comparison will help you decide.

Buick is not out of the woods yet.

True, the General Motors division was the only American automaker to post an improvement in sales in 1991.

And, yes, Buick is building cars that consistently rank among the best-built, most trouble-free in the industry.

But one wonders when Buick will take the next step.

When will Buick raise the level of refinement in its cars to match that of comparably priced imports?

Buick already has several huge advantages over most of the competition: The division’s cars are built well, styled nicely, offer more safety features and get better gas mileage.

But this week’s Park Avenue – and several other GM products I have tested recently – shows the automaker is not keeping pace with many imports in the same price range when it comes to refinement and attention to detail.

It takes a sharp eye to tell the difference between a supercharged Park Avenue Ultra and a standard version. Only the wheels are different, and the trunk lid contains a small, ”supercharged” script in chrome.

However, press the accelerator and the difference is readily apparent.

The supercharged Park Avenue Ultra performs much like the powerful big-engined Buick sedans of the ’60s and ’70s.

The engine is smooth and quiet, but a heavy foot provokes a wonderful symphony of mechanical sounds as the engine revs up and breathes in massive gulps of air.

A supercharger may connote visions of dragsters and jacked-up hot rods because those are the types of vehicles where this performance-increasing device most often is used.

Superchargers blast more fuel into the engine, and that increases power. Unlike a turbocharger, which is powered by exhaust gases, a supercharger is either belt-or gear-driven.

This car comes onlywith GM’s computer-controlled four-speed automatic, which parcels out the power to the front wheels with finesse in normal driving conditions.

However, on slippery roads the car must be driven with a light foot because the front tires can lose traction and send the car veering to the left or right.

Traction control – a computerized device that prevents tires from spinning on slippery pavement – is optional, but the test car did not have it. Traction control should come standard on all supercharged Park Avenue Ultras.

The test car delivered 19 mile per gallon in city driving and 26 mpg on a trip to Daytona Beach.

With a set of bucket seats and a floor shifter, Buick probably could market the supercharged Park Ultra as a sports sedan. But it comes only with bench seats and a column shifter.

Though the Park Avenue Ultra has a rather soft and bump-absorbing ride, it still retains its poise in fast cornering maneuvers and in spirited driv ing. It would, in fact, be a joy to drive this way were it not for the seats, which fail to hold driver and passengers firmly in place.

The variable effort rack and pinion steering seems connected to your subconscious – response is instantaneous, crisp and accurate.

The power-assisted anti-lock brakes – discs up front and drums in the rear – are powerful.

The test car was put together well, but I never could get comfortable in it.

The driver’s seat was terrible. The bottom cushion was too soft, and I sort of sank into it.

However, the seats looked nice with an embroidered ”Ultra” on the seat backs.

I also didn’t care for the unlighted, chrome-covered window switches on the door panels. They were ha d to use at night and looked like something out of 1965.

The electric door locks worked fine, but they w ere loud and clunky to the point of being annoying.

The interior has several nice touches. For instance, Buick’s air-conditioning system lets the driver and passenger control air temperature on their side of the car.

Rear passengers also have sun visors with vanity lights. Also, there is generous room in the back seat for three adults, plus a trunk large enough to carry four or five full-size suitcases.

But Buick has to move on now and start engineering greater comfort and refinement into its cars.

Full size sedan, great cruiser, big trunk space, easy to fix and relatively inexpensive to work on when you need to. Reliable and super comfortable.

Buicks are the best cars . Park Ave most reliable

March 6, 2018
By Deneane Webster from Bakersfield CA
Owns this car

Buick park Ave has huge trunk, inside extra roomy for feet, leg & body to sit,recline,sleep & relax . Seats 6 adult passengers .4 door automatic transmission., Power windows,door locks, seats. Has dual up front comfort heating and cooling for driver& passenger. Air Cond. Nice radio, beautiful color and design . Best of all is it's an American made car. Fuel injected and great fuel mileage. I can't say enough about it. Buick Roadmaster best biggest Buick.. have not drove but beautiful velour blue outside blue. Very good we'll made cars, we had Buick Riviera1967. Sleek ,great design inside and out.

September 5, 2017
By Jlchadwick from Wilmington, NC
Owns this car

Handled well, comfortable seats, it had a super charged engine. That car would fly! Nice and roomy too. 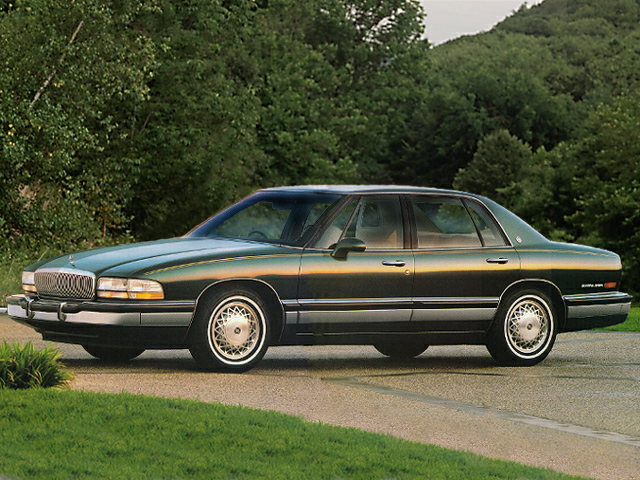