Our 1994 Buick Park Avenue trim comparison will help you decide.

The Buick Park Avenue Ultra is not all-new for 1994. It sports the same sheet metal and essentially the same engine as it did a year ago. About the only difference between the ’94 and the ’93, other than a price increase of $2,304, is that the ’94 is a better car because Buick focused on making a few minor changes that result in major improvements.

Radio and temperature controls in the steering-wheel hub also can be considered safety items, because you can change stations or dial up the heat without taking your eyes off the road.

The non-Freon air conditioning is better for the environment, and, like motherhood, apple pie and cupholders, that can’t be knocked.

You can’t knock the remote, keyless entry, either. When your hands are full of packages, or when you are strolling through a dark parking lot on the way to your car, it’s good to know you only need to press a button on the key fob and your doors unlock and the interior lights go on.

The 20-horsepower boost, to 225, in the 3.8-liter engine comes in handy on occasion-such as when you’re merging onto the Kennedy Expressway, moving into the passing lane on Interstate Highway 94 or simply pulling four adults and a trunk full of luggage up one of those steep hills in southern Wisconsin. The mileage rating is a respectable 17 m.p.g. city/27 highway. Based on how slowly the gauge moved during our test, 17/27 seemed conservative.

Granted, you don’t need the extra horsepower all the time, but it’s nice to have it in reserve, like the traction control. We called up the supercharger on three occasions-once in merging onto the Kennedy when a fellow in an Accord decided he wanted to pass on the merger ramp (he didn’t do it); another when trying to merge into the Kennedy express lanes in morning rush-hour traffic, when cars in those lanes sail along at 70 m.p.h. and don’t take to intruders too kindly (we slipped in); and a third time when trying to maneuver around the fleet of Yellow and Checker cabs parked along Rush Street outside the Marriott Hotel, trying to shut the road to traffic (we slipped around but had to suffer verbal abuse from the drivers).

The one feature we could do without is the heated seats-at least until the mad enginee r who chose the location for the on/off switch along the bottom left side of the driver’s seat comes to his or her senses and moves that switch to the instrument panel.

About halfway down the Kennedy in one evening’s rush we suddenly thought middle age had struck, as hot flashes rushed through our body. After a few rushes we realized the heat was coming from the seat-in waves. There was no button on the dash or console armrest, no light in the instrument panel advising that the heated seats were on and, more important, indicating how to turn them off.

After fumbling around the seat for several moments, we found the switch. We had accidentally activated it when pulling the safety belts from the door pillar. A red light next to the switch flashes on to let you know the system is active, as if the aroma of burning flesh didn’t serve as early enough warning. But who is going to see a red light at the bottom of the driver’s seat. How hot was it? The seat heats to 107.6 degrees. If you haven’t discarded polyester from your wardrobe by know, you will if you get the heated seats in the Park Avenue Ultra. Please move the switch, fellas.

When redesigning the seat heater switch, Buick also needs to come up with a change in the outside rearview mirrors. The Park Avenue driver- and passenger-side windows come with a fake vent glass in a thick frame. The frame is so thick that the outside mirrors had to be positioned farther back on the door. The location and tiny size of the mirrors make it difficult to focus on what’s behind or alongside you and to determine how far away it is.

Those aggravations should be dealt with, because Buick took pains to focus on details to make the driving experience very pleasant. Seats are wide and supportive and the most comfortable in the industry. You’d like to take them with you into the den. Interior room is spacious, and most instruments are positioned for easy use, although we would prefer that the light switches, which are in the driver’s door, would be on the dash.

Our test car was equipped with the touring suspension, which means total road comfort and the feeling of control over the driving environment. No road abrasions filter into the seat or the wheel to disturb you. The suspension is in harmony with the road.

Other nice features include a center arm housing dual cup, change and cassette holders; and dual sun visors with large visors you can swing to the side to block glare while you keep the small visors in place to prevent glare from ahead. The big visor has a slip-out shade you can position over the inside rearview mirror to prevent glare from slipping into the cabin.

One other item worth noting is the sharply sloped hood. In most cars, when the hood slopes like that it disappears from the driver’s view. That leaves the driver with the impression he or she has only 3 inches of crush space ahead. The Park Avenue, however, sports a Buick crest ornament on the hood, which gives you the perspective that the hood is 6 feet long and that you have ample metal in front as protection in an impact. Nice touch.

The base price is $31,699, and all the power items and comfort and convenience features are standard.

car is in great condition only had two owners , me

the car was purchased new by my uncle, he past and it sat for a while my aunt didn't drive no where but church and grocery store , their is a little dent on the front bumper , where she hit one of those yellow poles, after she passed it was left to me i've had for about 8 years !

October 25, 2017
By Park Avenue Lover from Wisconsin
Owns this car

Truly great car. I've owned it for 16 years. Purchased in 2001 with 70k miles. Now have 253k miles. Engine and transmission are strong. Starts right up every time. No major repairs ever needed; only routine maintenance. And parts are cheap! Highway trips get 30-32mpg. City gets 18-20mpg. Runs regular gas. Lots of power and pickup. I'm always impressed when I put the pedal down--it really moves. Great handling and braking. A very confident driving experience. Interior seating is still like new, with cloth seats. Steering wheel controls are excellent, putting just the right controls conveniently on the wheel. Quite ride and very comfortable. When the rust finally gets it, I'll wish it was 2001 again so I could buy it and enjoy it again!

October 5, 2017
By Jeremy B from Montpelier, OH
Used to own this car

This car was my first vehicle and was a great car to drive. With the supercharged V6 engine it had plenty of power, yet was easy to drive. It was also the most comfortable car I ever owned, with sofa-esque powered leather seats and air suspension. The interior was huge, with plenty of room to fit my husky 6'3 self. There was plenty of room in the back as well, and I considered renting the trunk out to a family of five. The only negative I had was that premium fuel was required, a small price to pay for supercharged performance. Also, it was fun to park due to its size, but the car handled well and you get used to the size pretty quick. Overall, a great used car buy if you can find one. I miss it terribly and would definitely buy one again. 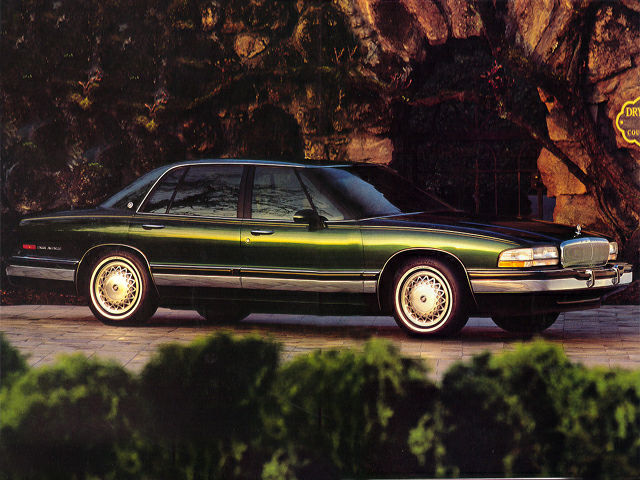