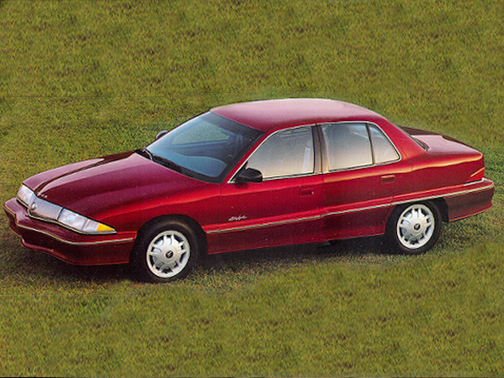 Our 1992 Buick Skylark trim comparison will help you decide.

After driving the redesigned Buick Skylark, you are tempted to think General Motors hasn’t learned much since it started building cars in 1908.

Of course, we know that’s not true.

After a devastating $4.5 billion loss in 1991, GM returned to profitability in the first quarter of 1992. The world’s largest automaker is rebounding quickly because of cost-cutting measures and because of an improved line of cars, trucks and vans that are rapidly closing the gap – and in some cases passing – the competition.

However, there are still a few chinks in GM’s armor. The Buick Skylark GS is one of them.

It seems mind-boggling that GM could miss the mark so widely with this overpriced, under-equipped compact car – especially since the standards for this size vehicle are so clearly defined in cars such as the Toyota Camry, Nissan Maxima and Honda Accord.

On the Skylark, the GS stands for Gran Sport, so that’s why you’ll find some extra muscle under the hood. Standard models come with a 2.2-liter four cylinder, but under the GS model’s wildly curved hood rests a potent, but civilized 160-horsepower, 3.3-liter V-6 and an automatic transmission.

The Skylark GS is no muscle car, but it has snappy acceleration and can ease past slower moving traffic with only slight pressure on the accelerator.

Performance figures are not available for the Skylark, but I would guess 0 to 60 mph comes up in about 10 seconds.

No company makes better automatic transmissions than GM. The one in the Skylark upholds this notion, but there’s a problem here. It’s only a three-speed automatic. Virtually all other manufacturers have gone to computer-controlled four-speed automatics.

Still, the fuel economy is good; the test car averaged 18 miles per gallon in the city and 28 on the highway.

There are three buttons on the dash that adjust the electronically controlled shock absorbers.

In the ”sport” mode, the car is transformed into an agile and capable driving machine that excelled in all areas except quick, panicked turns. That’s when the front wheels lost traction. The two other selections are ”normal” and ”touring.”

The ride is typical Buick. It’s nimble, comfortable, relaxed and hovering on the edge of sportiness, yet you can never push the car too hard without causing it to lose its composure. The car understeers (the rear tires have more traction than the front tires) when cornering fast.

The turning diameter is a m anageable 35 feet. The test car came with a fine set of anti-lock front disc and rear drum brakes.

Here’s where nearly all the mistakes were made. Let’s start with the seats.

The manually adjustable lumbar support for the front buckets – controlled by a knob on the side of the seats – shoves what feels like a square piece of metal into the small of your back.

The only way to achieve reasonable comfort is to fully retract the lumbar adjustment. Many other cars use an inflatable bag inside the seat to adjust the lumbar support.

The rear seats are not bad, but getting into them can be hazardous because the design of the rear do ors makes it difficult to enter or exit without smashing your head.

On a car costing nearly $20,000, a driver’s side air bag should be standard equipment as it is on most similarly priced cars. You can’t get an air bag in the Skylark.

The car’s styling drew several negative comments. A passenger said t e Skylark looked like a MardiGras float, and he wondered if there were a button on the dash that changed the appearance to normal.

There are some funky curves on this car, both inside and out.

The rounded, swooping dash houses a full complement of analog gauges that would be fine, if they weren’t partially obscured by the steering wheel.

On the driver’s side, the master window switches are located on the dash. They are difficult to find and use at night. The front passenger’s window switch is on the lower portion of the door panel. It looks as if it were tacked on at the last minute.

To the car’s credit, there is an easy-to-load trunk with ample space and an elastic net to hold grocery bags and other parcels in place.

Visibility is fine front and rear.

Except for a few loose pieces of plastic trim on the dash and on the seats, the car seems to be assembled reasonably well.

There may be other versions of the Skylark worth considering, but the GS model at about $20,000 does not compare well to competitive cars. 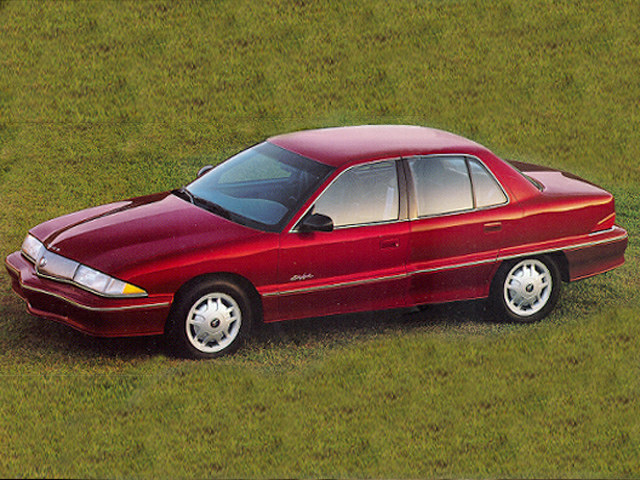