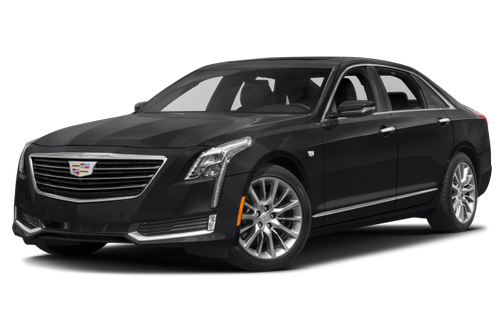 Our 2016 Cadillac CT6 trim comparison will help you decide.

The verdict: The 2016 Cadillac CT6 is a well-rounded, almost-full-size luxury sedan with a quiet interior, premium appointments, impressive technology and great performance with its new twin-turbo V-6, but the sedan falls a bit flat when equipped with its base, turbocharged four-cylinder engine.

Versus the competition: Solid driving dynamics and ramped up technology can’t completely disguise an interior that, while comfortable, is a half-step behind other more established full-size luxury sedans. However, with four-cylinder models starting around $30,000 less than its German competitors, the CT6 is an intriguing option for those who want full-size luxury without a full-size price.

Cadillac’s new flagship sedan, the CT6 is a tweener: slightly smaller than its full-size competition but too big to be considered a midsize. Cadillac says it targeted midsize luxury sedans in two key areas: handling and price.

The CT6 is offered in base, Luxury, Premium Luxury and Platinum trim levels.

Exterior & Styling
The CT6 features a wide, low-slung front grille that’s a departure from the XTS, which was the largest sedan in Cadillac’s lineup before the CT6 appeared. The grille meshes well with the vertically oriented LED daytime running lights to provide an attractive nose that’s easily distinguishable from any of Cadillac’s other sedans. The overall look is understated, but attractive. When viewed up close, small details stand out, like the sharp creases on the hood and a prominent character line that wraps from the headlights to the taillights.

Full LED headlights, daytime running lights and taillights come standard across all trim levels. The base model also gets 18-inch alloy wheels and a capless fuel filler. Top-of-the-line Platinum models get their own unique grille, with added chrome, and their own 20-inch, five-spoke alloy wheels.

How It Drives
I tested two of the CT6’s three engine options, all of which come with an eight-speed automatic transmission. Cadillac made extensive use of lightweight aluminum throughout the CT6, which helps keep the base model’s curb weight to just 3,647 pounds — around 1,000 pounds less than the lightest version of Mercedes-Benz’s S-Class sedan.

Despite its reduced weight, the CT6 just doesn’t feel alive with the 265-horsepower, turbocharged 2.0-liter four-cylinder, which is shared with several other vehicles in Cadillac’s lineup, including the smaller ATS and CTS sedans. It isn’t underpowered in the traditional sense; there’s simply no “easy power” on tap like you expect from a luxury sedan. If you want it to get up and go, it will take forethought and a lot of accelerator pedal.

Hop into a CT6 with the most powerful option, though — a 404-hp, twin-turbo 3.0-liter V-6 — and the experience changes instantly. Unlike the turbo-four, which is available only with rear-wheel drive, both V-6 variants come with standard all-wheel drive. This gives the whole package more confidence and helps the twin-turbo CT6 put its 400 pounds-feet of torque down. On the curvy roads that were plentiful on my drive route, the engine really punched through corners, revving freely and slinging the car into the next bend with veracity.

In between these two engines is a 335-hp, normally aspirated 3.6-liter V-6 that we have yet to test.

Overall, the CT6 isn’t a canyon-carver. Its suspension tuning focuses on comfort over performance. It allows some body roll in the corners, which mutes feedback slightly when you’re really pushing the car on curves. This is not a negative; it gives the CT6 a great ride, even over broken pavement.

I did not get a chance to test the CT6’s Active Chassis Package (optional on Premium Luxury trims and standard on Platinum), which adds the magnetic ride control adaptive suspension, active rear steering and 20-inch wheels. That version’s selectable drive modes change how the suspension responds, as well as the power-steering assist and accelerator responsiveness.

EPA-estimated fuel economy ratings are 22/31/25 mpg city/highway/combined for the four-cylinder (premium gasoline recommended), while the 3.0-liter engine is rated 18/26/21 mpg (premium required). As of publication, the EPA had not yet rated the 3.6-liter V-6.

Interior
The interior design focuses on clean lines, minimalism and a lack of drama that matches the exterior. It manages to be attractive without being ostentatious. But — and I am nitpicking here — although materials quality and overall comfort are very good, the CT6 remains just a hair behind the very top competition from the German brands on both measures.

I’m happy to report that the CT6 is one of the quietest cars I’ve ever tested. Thanks to added insulation and a standard active noise-cancellation system, the cabin remains quiet at all speeds, even in less-than-ideal road conditions. Conversations can be had between occupants at normal volume, and the amount of isolation is impressive.

There’s plenty of legroom (40.4 inches) and headroom (38 inches) in the backseat, where two adults will fit very comfortably. The legroom figure lags the full-size German sedans by a few inches, but it’s inconsequential; even with the front seats moved pretty far back, my knees didn’t get within 3 or 4 inches of the seatbacks. Fitting three folks in the back, however, would be slightly trickier; there’s plenty of room, but the middle seat is elevated and there’s a decent-sized hump on the floor. It would be fine for shorter rides, but longer hauls with a full car will not be very comfortable.

Jump up to the top-of-the-line Platinum, and the rear seating area is flush with comfort features, including two separate climate zones (Cadillac’s first quad-zone system), power reclining, heated outboard seats and massage functions. It also adds a rear entertainment system that offers two 10-inch screens that rise out of the front seatbacks. You can stream movies from a phone or tablet with the system, in addition to playing Blu-ray discs and DVDs.

Ergonomics & Electronics
The first iterations of the Cadillac User Experience control and multimedia system were painful to use. In its present form, though, the roughest edges have been smoothed, making this my favorite version to date. This is due in part to a touchpad controller that debuts on the CT6. It sits between the front seats and allows the driver or passenger to operate the system more comfortably; before you had to reach up to the large touch-screen, which is mounted pretty high up on the dash — not easily reachable.

Moving your finger on the touchpad activates a green box that acts the same way a mouse cursor would; locate the action you want and tap the pad to “click.” The touchpad also accepts two- and three-finger gestures, making it easy to zoom in or out on maps, flip between screens and bring up the tuning menu from the bottom of the screen.

The CT6 also offers a pair of new technologies that haven’t been seen before: a triggered video recording system and a rear camera mirror. Triggered video recording uses the front and rear cameras, which are constantly recording footage onto an SD card while driving. In the event of a crash, the footage can be saved. The system also uses the car’s surround-monitor cameras to record what’s happening if the alarm system is activated while the car is parked.

The rear camera mirror that’s activated via a switch on the auto-dimming rearview mirror was one of my favorite parts of the CT6. Flip the switch, and the mirror turns into a screen displaying an image from the camera mounted in the rear of the car, which offers a much wider field of view than a traditional mirror. It worked like a charm, with one disclaimer: I didn’t have a chance to try it at night to see how it responds to headlights.

Pairing my Android smartphone via Bluetooth was quick and painless (Bluetooth connectivity with audio streaming is standard). The CT6 comes out of the gate with Apple CarPlay technology included, and Android Auto will follow later in the year (no firm date had been set as of this writing). A wireless charging pad is also standard, but if you don’t have a compatible smartphone, a special case will be required. Read about one of our editor’s experience with a wireless charging system here.

The rear seat has a pass-through that opens up in the middle for skis or other long items, but the bench itself cannot fold down to carry larger objects. This is common practice for full-size sedans; none of the competitors mentioned earlier have folding rear seats, either. All the CT6’s midsize-sedan competitors offer split-folding rear seats.

Safety
As of publication, the CT6 had not been crash-tested.

The CT6 offers plenty of safety technology and driver aids. Standard safety features include front and rear parking sensors, a backup camera and a year of OnStar Guidance, which includes automatic crash response, stolen vehicle assistance and roadside assistance, among other features.

As you move up the trim levels, safety options pile on quickly. A step up from base models, Luxury trims add a Driver Awareness Package, which includes forward collision alert, low-speed automatic braking, forward pedestrian detection, lane departure prevention, blind spot warning and rear cross-traffic alert. Automatic safety belt tightening snugs up the seat belts if the driver or collision-alert system executes an emergency maneuver. A surround-view monitor and automatic park assist, which handles the steering for both parallel and perpendicular parking, are also standard on Luxury models and up.

The Platinum trim comes with every safety feature, including automatic braking in Reverse, full-range adaptive cruise control that works in stop-and-go traffic, and a night vision system that highlights pedestrians and animals both on and near the road ahead.

Value in Its Class
The CT6 spans a very wide price range. Base models with the four-cylinder engine start at $54,490 (including a $995 destination charge), while a fully loaded Platinum model with the new 3.0-liter engine runs all the way up to $88,460.

Compare the CT6 with midsize models and it offers greater comfort and amenities without a huge jump in price. Compare it with full-size models and — aside from the Platinum — the CT6 represents incredible value. It offers nearly the same levels of comfort and refinement as the bona fide full-size sedans, but at nearly $30,000 less (in base form) than the competitors noted above. Even if you move up to models with the 3.0-liter engine, they start at $65,390 — still around $20,000 less than full-size competitors.

Overall, the CT6 has in-between dimensions and price, but it ends up looking pretty good from any direction.

I’m really enjoying the smooth ride and luxury features. The panoramic sunroof view is amazing and the comfort of the sedans leather interior is unparalleled.

This Cadillac CT6 is by far the best value for my money. It is solidly built, quiet, and smooth. The ride is like a Mercedes-Benz and it handles almost like a sedan. It's just the right size, has very comfortable seats and is loaded with technology!

At this point the car is Great , owned 2mo

The car is great a lot of technology in it. The twin turbo has all the power you will need. Not sure about the transmission at this point. It has 8 gear automatic and it seems to have a little problem when coming to a stop- if you don’t come to a complete stop the shifting is a little sloppy. But overall I love it.

All model years for the Cadillac CT6