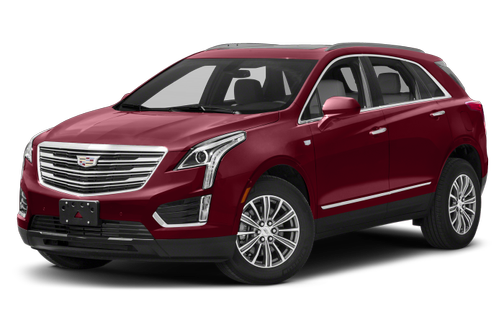 Our 2017 Cadillac XT5 trim comparison will help you decide.

The verdict: The 2017 Cadillac XT5 excels at offering a luxurious experience that should tempt midsize luxury crossover SUV shoppers — and worry its competitors.

Versus the competition: There’s no mistaking the Cadillac XT5 for anything but a luxury car. It feels more composed than the Lexus RX 350, but lighter and more fun than the Mercedes-Benz GLE-Class. It also offers a more comfortable ride than either of them and has a top-of-the-class interior.

Exterior & StylingFrom the outside, the first thing that stands out about the Cadillac XT5 five-passenger SUV is how fresh it looks compared with the SRX it replaces. It’s not that the SRX was an ugly car, but to my eye, it’s been around so long that it kind of blends in. Not so with the XT5: It has a pronounced grille and manages to look more aggressive. It’s not radically different, but since it’s taking over for a handsome car, I don’t think it needs to be.

It’s roughly the same size as the outgoing model. The Cadillac XT5 sits on a slightly wider track and is roughly the same length than the model it replaces, though the wheelbase is about 2 inches longer. What’s significant is the increased length goes right where it’s needed: into more rear-seat legroom. You can compare the two Cadillac models here.

How It DrivesThe old SRX was a comfortable SUV that I’d have no issue taking on a long drive along highways, but I wouldn’t want to take it anywhere with twisty roads. The SRX felt a bit too heavy and ponderous for that sort of thing. That’s not so in the XT5.

The Cadillac XT5 is 292 pounds lighter than the SRX, and it shows in its driving dynamics. The XT5 still is tuned to be a luxury car, but on the tight roads and twists of the driving route it never felt like it was wallowing or plowing. That it’s able to provide stable handling along with a comfortable ride over bumps is impressive.


The steering is well balanced and offers a decent feel of the road. It’s light enough to maneuver around a parking lot, but it still is OK on twisty stuff. Competitors such as the BMW X5 offer more road feel but also require more effort on the part of the driver. I think that for the luxury market, though, Cadillac may have found the sweet spot between being too light or too heavy.

There’s also an available Sport drive mode that alters the steering to offer a quicker response (as well as changing the shifting of the transmission for more aggressive driving), but I honestly didn’t notice much of a difference during my test of it.

All XT5 models are powered by a 310-horsepower, 3.6-liter V-6 engine with an eight-speed automatic transmission and can be had with front-drive or all-wheel drive. All the versions I drove had AWD.

What’s interesting about the Cadillac XT5’s setup is that it uses a dual-clutch system to swap power front to rear and can send 100 percent of the power to either end of the car. The AWD system also can split torque from side-to-side on the rear axle.


What drivers are likely to notice most, though, is that the system will require some input from them. With the XT5, you have to switch from front-wheel (called Touring drive mode) to all-wheel drive. The system won’t do it automatically — as others do. It will sense road conditions and outside temperatures and suggest to drivers that they swap modes.

Staying in front-wheel drive helps mileage. The new Cadillac XT5 gets an EPA-estimated 19/27/22 mpg city/highway/combined with two-wheel drive and 18/26/21 mpg city/highway/combined with AWD. But I’m not sure asking the driver to swap modes to engage AWD is the best solution. (If you select AWD, the XT5 will remain in it until you change modes. So if you park for the night, the XT5 won’t default to front-drive when you restart the car and drive away.)


The XT5 deserves praise for a stop-start system that is among the least intrusive on the market. In stop-and-go traffic, it was hard to notice that the engine was shutting down or powering back up. This is something that competitors — notably the Mercedes-Benz GLE – fall short on. I really noticed it only when the engine turned on at a stoplight to run the air conditioner.

The XT5’s engine power is good but unremarkable. It did what I wanted it to do — making passes with ease and not making a lot of noise — but it’s not a barn burner.

Considering the competitors, the Lexus RX offers the most immediate accelerator response, but after that isn’t exceptional, and the Cadillac XT5 and GLE are similar in that they don’t offer that immediate accelerator response but otherwise offer satisfactory power for the class. In terms of handling, the RX 350 feels light but bounces around and doesn’t feel as composed as the XT5. The GLE, while it feels composed, also feels like it weighs significantly more than 400-ish pounds that it has over the XT5. You can compare the cars here.

InteriorWhile there is more room for backseat passengers, they had better be either short or willing to recline the seat; there’s just not a lot of headroom. Granted, I’m 6 feet 2 inches tall and I carry a lot of my height in my torso, but others who aren’t as tall as I am also noticed the XT5’s tight rear headroom. There’s actually less room than in the SRX. Cadillac says that reclining the leather seat solves the problem by effectively giving you more room — and it does — but I’m just not sold. The fact is, if you’re a taller sort who likes to sit upright, the XT5’s backseat likely is going to be a problem.
My drive was in cars that had preproduction interiors, so I won’t speak to the craftsmanship, but the choices of the materials and the overall design are good. There are numerous decorative trim options including carbon fiber, two types of aluminum and three types of real wood.

They vary by trim level, so I got to sample only one of the aluminum and one of the wood interiors, and I was impressed. The wood managed to look like real wood — something that isn’t always the case. The same goes for the aluminum; it had the right sheen and, were I opting for the Cadillac XT5, it’d be the choice I’d go for. It seemed best to fit a modern car.


In a welcome change from the SRX, visibility is improved. Cadillac moved the side mirrors from the windshield pillars to the door, and fitted glass where the mirror was to open up the cabin. This has a big effect on making forward visibility better from the power-adjustable front seats, though the pillars sweep back in such a way that they obstruct surround-view visibility somewhat.

I think the Cadillac does a better job than either the RX 350 or GLE in offering a truly luxurious interior. The RX 350 uses too much plastic that doesn’t look attractive enough to beat out either the Cadillac or Mercedes-Benz. The GLE-Class offers materials that rival the Cadillac’s, but I still think they fall short. Finally, a personal preference of mine is having the infotainment screen integrated in the dash, rather than the tablet-jammed-atop-the-dashboard look that’s the current fashion. Of the set, only the XT5 integrates the screen.
Ergonomics & ElectronicsCadillac retains its Cadillac User Experience system to handle the multimedia and navigation control. I didn’t play too much with the CUE system, but the little bit that I did showed that while it might not be the most intuitive right off the bat, I could pick it up pretty quickly. However, it doesn’t have a volume knob, so I found myself using the steering-wheel controls for that function. In either event, it’s nice to have a touch-screen to swap between menus as opposed to the awful mouse controller that Lexus uses. Apple CarPlay is standard.

I extensively tested Cadillac’s rear camera mirror and liked what I saw. Unlike a backup camera, it provides a full-time rear view while driving forward. Built right into the conventional inside rearview mirror, the display offers such a wide, distortion-free view to the rear that on the highway I almost felt like I didn’t need side mirrors. And if I had the rear seats full, I’d find it handy to be able to see behind me rather than see my passengers’ smiling faces. I want to test the rear camera mirror at night to see how well it works, but during the day, it’s a treat. Things that appear in the rearview are a bit closer than they appear, but not so much that I’d say it’s a flaw. It’s just something to get used to.

For those who live in areas where a lot of road salt is used, the camera has a washing system to keep the rear lens clear. That’s a nice touch.
Cargo & StorageCadillac switched from a conventional, mechanical gearshift to an electric knob and, weirdly, its biggest payoff is in creating a space under the center console that’s large enough for a small messenger bag or purse. That came in handy on my test drive, and it’s something I’d see myself using a lot on a day-to-day basis.

The cargo area is not extraordinary, in that it’s not particularly large but not so tiny that it’s not useful.
SafetyAs it’s a new car on a new platform, crash-test results for the XT5 are not available as of publication.

Cadillac offers a variety of safety features, most of which are bundled in the optional Driver Awareness and Driver Assist packages, and include automatic front and rear emergency braking for low-speed conditions, lane departure prevention, rear cross-traffic alert, blind spot warning and adaptive cruise control.

You can browse the full list of features here.
Value in Its classSometimes when cars are redesigned it can be hard to see why it was done. The 2017 Cadillac XT5, however, takes a comfortable, aging car design and brings it up toward the top of the class.

It excels in being a luxury crossover SUV, meaning that its strengths are a high-quality interior and a comfortable ride. Its handling also is improved and moves it well ahead of the Mercedes-Benz GLE-Class and Lexus RX350.
I’m still not sold on the all-wheel-drive system, though. The competitors don’t have a similar setup, and the difference between the all-wheel-drive and two-wheel-drive versions is only 1 mpg, so it feels really unnecessary. Still, after many hours driving the Cadillac XT5, that seemed to be its biggest flaw, and I think that says a lot.

May 3, 2021
By Vinnies SS from Cobleskill ny
Owns this car

Ease at getting in and out of vehicle. Surprised at the amount of leg room in booth front and back seats. Good for around town and for traveling. CUE prone to fingerprints. Dependable. Did not like the run flat tires. Harsh ride and noisy. Great styling.

The vehicle is very roomy, has lots of cargo space, and full of technology! Fits perfect for my family of 5, absolutely recommend it to everyone.

Rating breakdown (out of 5):
8 people out of 8 found this review helpful. Did you?
Show full review
See all 198 consumer reviews

September 17, 2018
News
Which Cars Have the Best Stop-Start Systems?

All model years for the Cadillac XT5 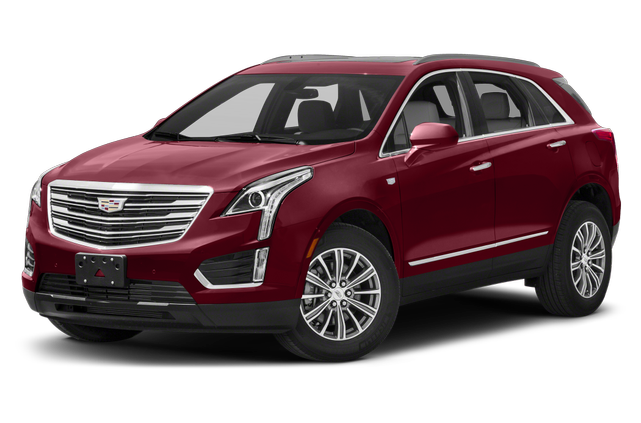 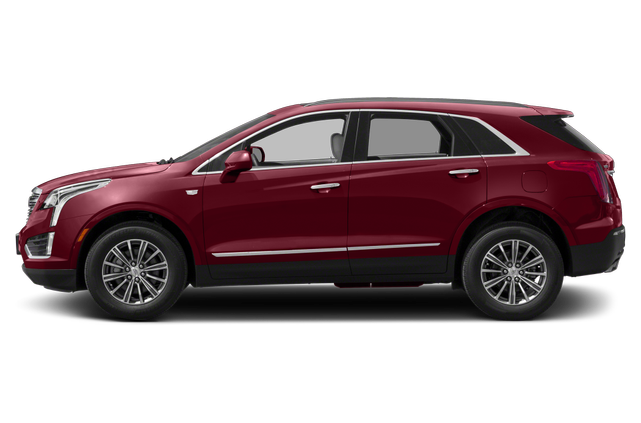 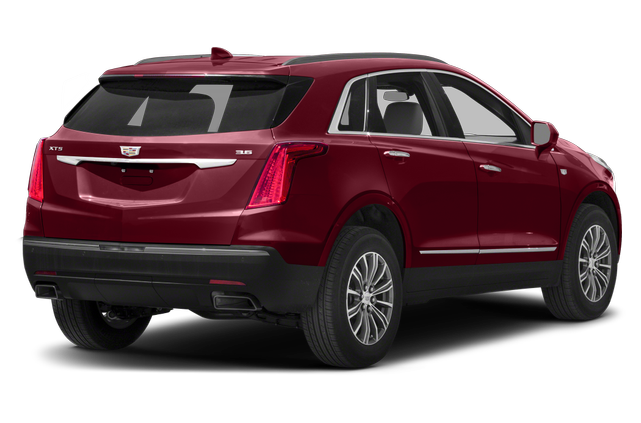 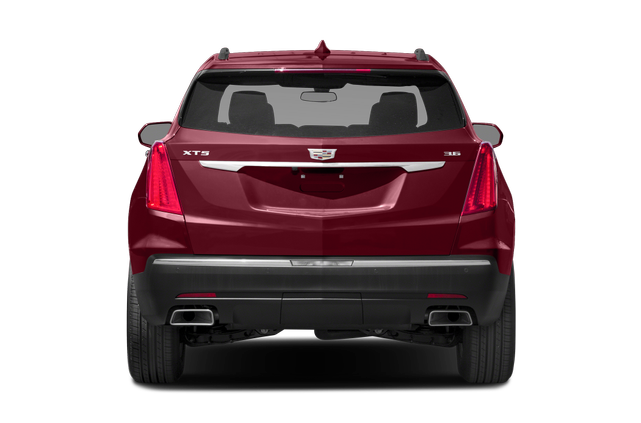 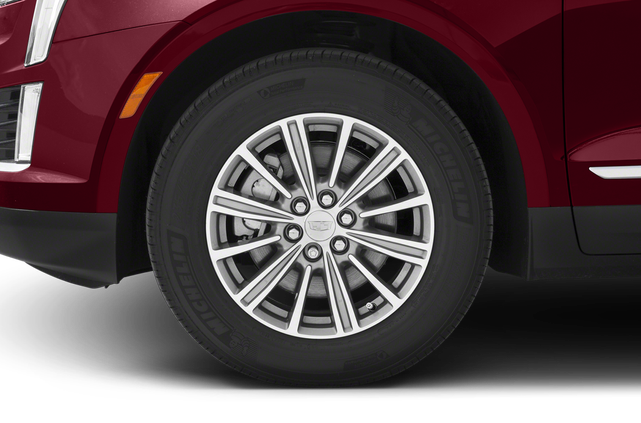 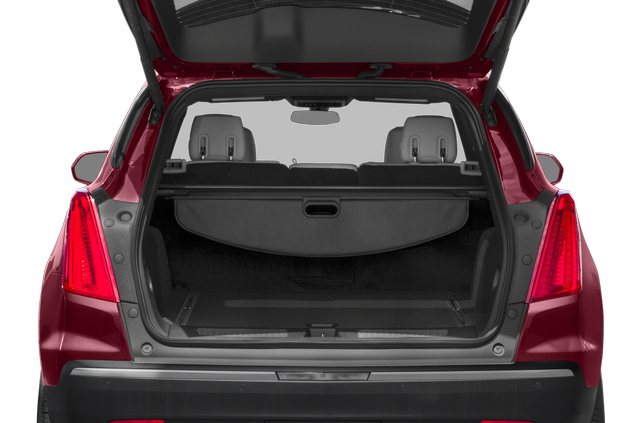 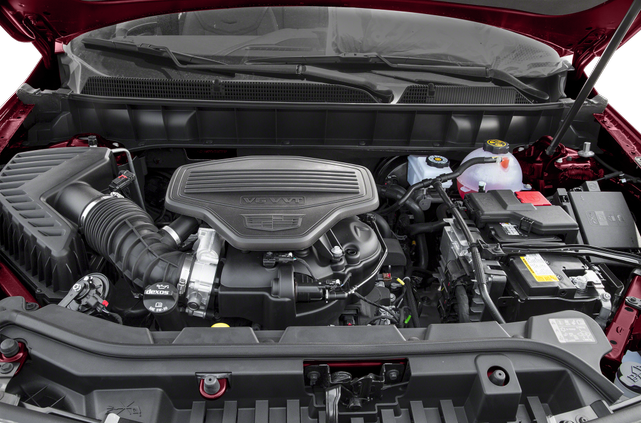 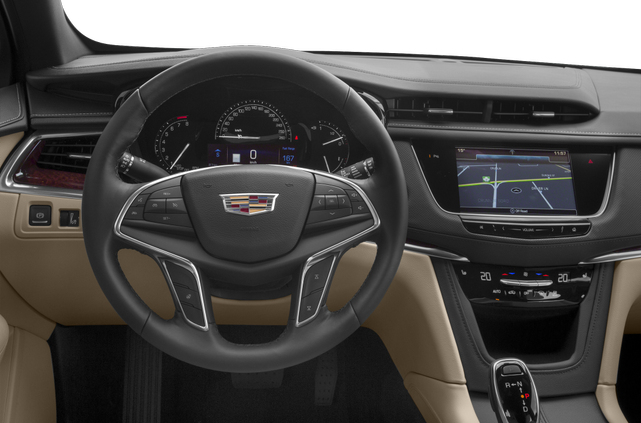 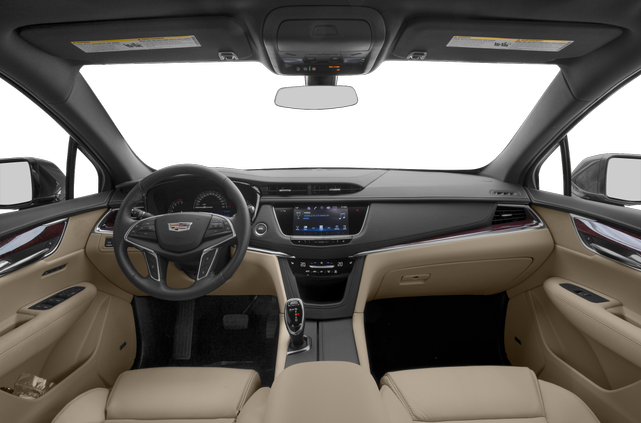 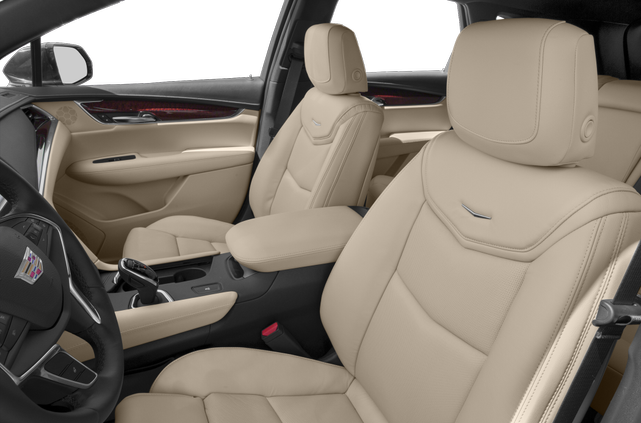 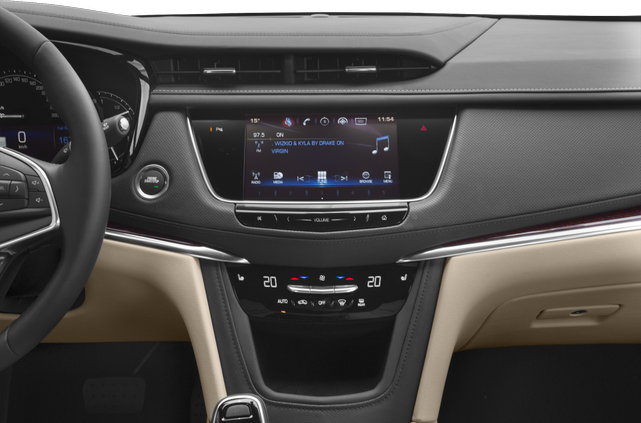 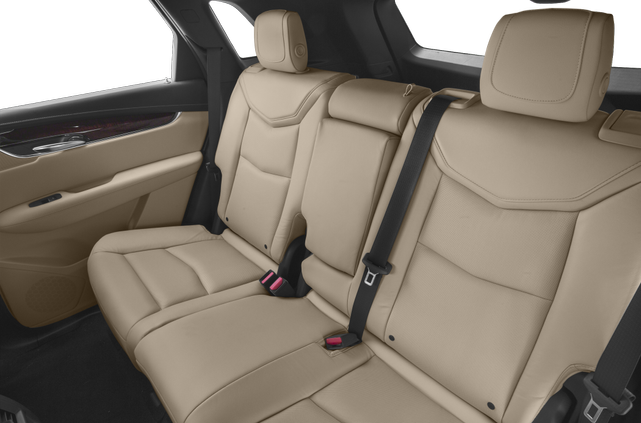 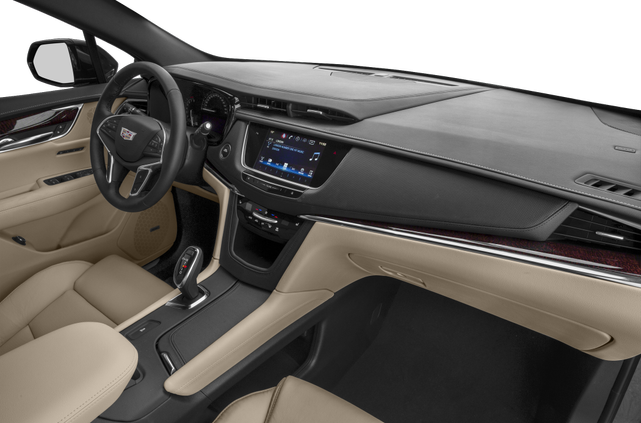 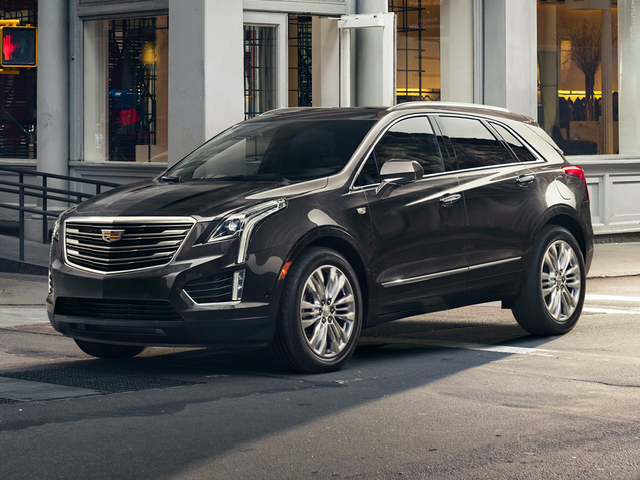 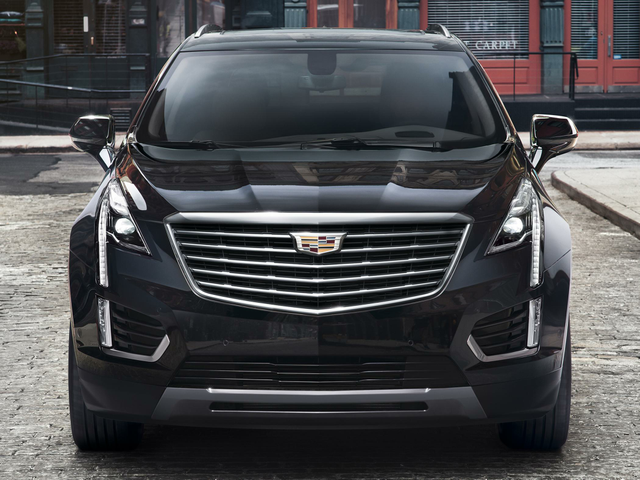 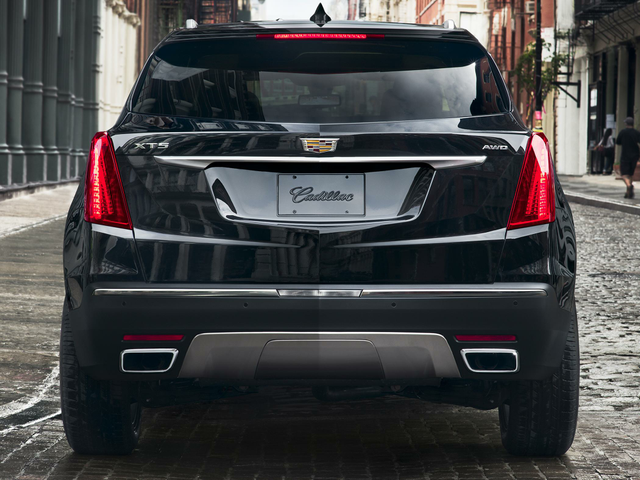 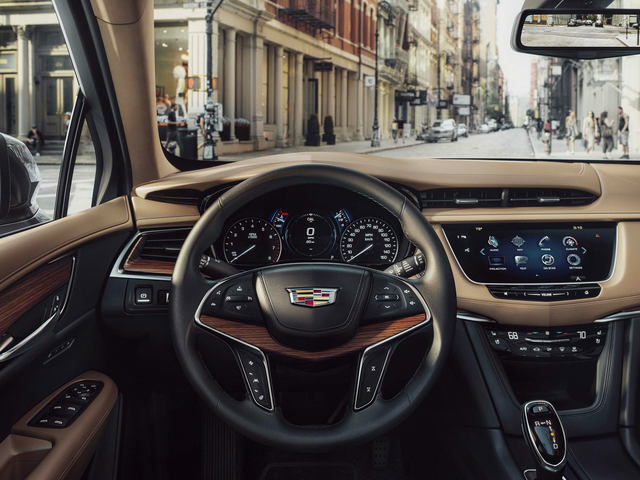 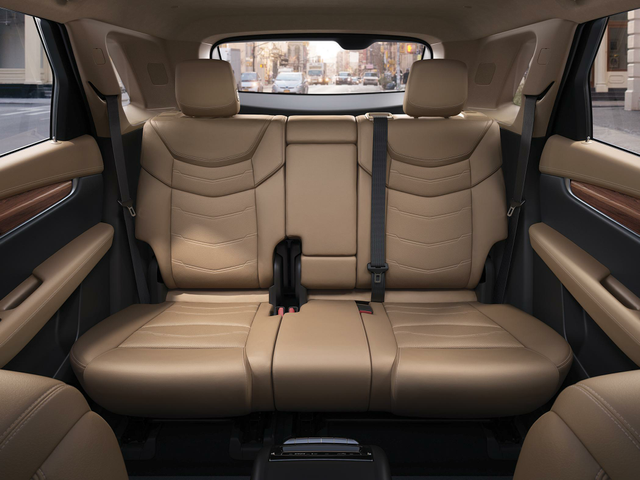 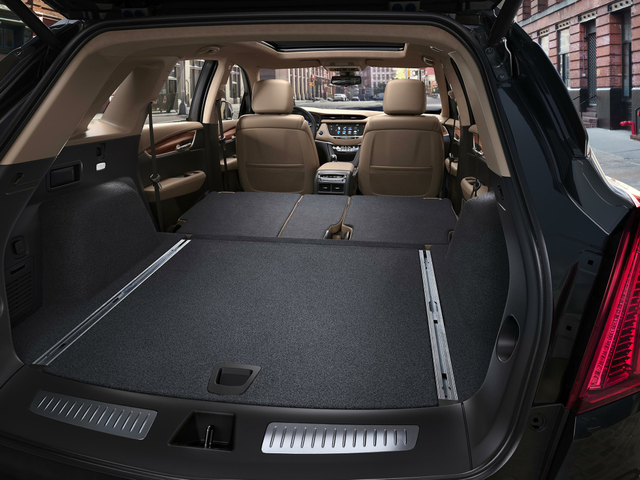