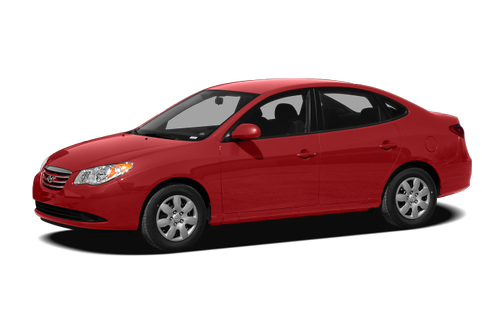 Our 2010 Hyundai Elantra trim comparison will help you decide.

There are a lot of new compact cars on the market these days, including the Kia Forte and redesigned Mazda3. Others, like the Honda Civic and Hyundai Elantra, are aging gracefully.

The Elantra is one of the least expensive compacts out there, especially with the seemingly nonstop incentives available on this model. Now, for the first time, the company is offering a bare-bones model, dubbed Elantra Blue, that also gets the best mileage of the lineup: 35 mpg on the highway.

It’s an alluring concept for cost-conscious shoppers, but because of the Blue’s sparse features and the cost of adding just a few essentials, shoppers should take a close look at the real value of such a proposition.

Performance
There is absolutely nothing exciting about driving a Hyundai Elantra. It has ho-hum handling and no personality, and acceleration is rationed tighter than food on “The Biggest Loser.” Of course, it doesn’t do anything badly, either. In fact, the driving experience is completely predictable, unlike the somewhat inconsistent Forte and the numb Toyota Corolla.

The five-speed manual transmission in my Elantra Blue tester was easy to shift, with a light clutch. I commuted in heavy traffic and my left leg never got tired.

The ride was relatively soft, with acceptable road and wind noise for this class. The seats are comfortable on long drives, too. Basically, this is the type of car a person buys to commute in, and the Elantra is very good at it.

Mileage for a standard Elantra GLS with a manual transmission is 25/34 mpg city/highway, while models with an automatic transmission do better, at 26/34 mpg. Those numbers are up 1 mpg in all categories versus the 2009 model. The Elantra Blue is rated 26/35 mpg.

I averaged 25 mpg during my week with the Elantra Blue. I generally average close to cars’ city mileage estimate during my test drives, so that seemingly low number isn’t unusual.

I did get the chance to drive in some significant snow and ice here in Chicago, and the Elantra did a fair job tackling it. I usually recommend all-wheel drive to folks who can afford it and live in a place like Chicago, but the Elantra shows that even an inexpensive front-wheel-drive car can handle slick roads when driven properly.

Stability control and traction control are standard on the top-of-the-line Elantra SE, but they’re absent on the Blue. I was more worried the car would be equipped with low-rolling-resistance tires, which are made for efficiency and might impact grip in the snow. Hyundai squeezed that single extra highway mpg from the engine, though, so standard 15-inch tires got me through the slush with plenty of grip — thankfully.

Value & Features
All Elantras come with a comfortable interior with few frills and lots of room, plus a large trunk for the class (14.2 cubic feet). The dash has a simple layout, with materials that are on par, quality-wise, with most of the competition, though they’re a step or two behind the best, like the Civic. The seats are supportive, visibility is good and you don’t feel cramped inside. That’s about all you can ask of an inexpensive compact.

But how inexpensive is it really?

The Elantra Blue starts at $14,145, with standard features like power windows and locks, plus power, heated side mirrors and remote entry. But there’s no air conditioning or stereo, and it comes in just four colors: gray, silver, black and blue. There’s only one option package, the $1,700 Comfort Package, which adds things like air conditioning, a stereo and cruise control. My test car had that package and a Bluetooth system, bringing the total MSRP, including the destination charge, to $17,020.

That’s not exactly the cheap car that’s advertised. Kia’s all-new Forte sedan, comparably equipped, is $15,890 after destination, and it’s a more advanced car. And get this: It’s also available with a $1,000 cash-back offer in most areas through May 3, 2010. Its slight mileage disadvantage — 25/34 mpg versus the Blue’s 26/35 — likely won’t outweigh its lower price compared with the Elantra Blue.

Move up to the Elantra GLS at $16,895, and you get an automatic transmission and everything in the Blue’s comfort package as standard equipment. Equipped identically to my Blue tester with Bluetooth, the MSRP would be $18,070, including destination. As of this writing, there was also a $1,500 cash-back offer on all Elantras.

There’s also an SE trim level that adds 16-inch wheels, steering-wheel audio controls, stability control, traction control and a sport-tuned suspension. It starts at $17,845 before destination, and it also has a $1,500 cash-back offer (all valid through April 30).

Safety
The Elantra now receives the top ranking, Good, from the Insurance Institute for Highway Safety in both frontal and side crash tests. It rates Acceptable, the second-best score, in rear tests. Hyundai altered the structure of the doors, so side crash-test scores improved. The Elantra comes with six airbags, including seat-mounted side airbags for the front seats. Safety equipment like stability control and traction control aren’t offered on the lowest trim levels, though they’re standard on the SE.

Elantra in the Market
While the Elantra is as solid as cars come in the compact segment, it’s not going to wow anyone — nor does it best the new Kia Forte in terms of price or safety features. You’d have to find the right trim level and equipment, the right rebate and perhaps even the right salesman to get the green light on this practical purchase.

December 1, 2020
By Rose from Sacramento
Owns this car

Good value for price. CLASSY- Nice to look at inside & out. peppy when the light turns green. Comfortable, reliable & has been a easy & affordable car to take care of. I love mine & I bought mine used at the dealership. I feel very Blessed to own this car.

Most reliable car i’ve ever owned!

This car met all my needs! Spacious and love the design of the car inside and out! Great for everyday commute and trips farther out!

It Mets all me needs, I wouldn’t sell it if I will stay here for a long time but because I will travel outside the state I decided to sell it

Rating breakdown (out of 5):
0 people out of 0 found this review helpful. Did you?
Show full review
See all 73 consumer reviews