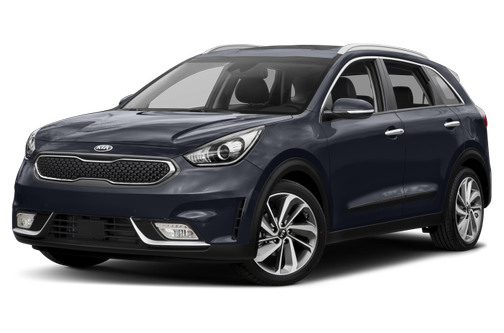 Our 2017 Kia Niro trim comparison will help you decide.

The verdict: The Kia Niro is a small hatchback that’s practical, good-looking and — oh, just so happens to be a hybrid that gets up to 50 mpg combined.

Versus the competiton: Though it doesn't match the Toyota Prius' mileage, the Niro's efficiency is more than respectable in a car that drives better than many hybrids on the market.

The Kia Niro is a hybrid, but at many points during its driving introduction in San Antonio, Kia referred to it as the “un-hybrid.” The idea is that you can have a car that’s a useful hatchback that also happens to be a hybrid with good fuel economy.

Or, as one executive put it more bluntly: “You don’t have to drive ugly” to get great mileage.

If that’s the goal of the Niro, Kia has succeeded.

The Niro competes with hybrid hatchbacks like the Toyota Prius and Ford C-Max.

For a car more conservatively styled than the Prius, Kia has still done its due diligence in trying to eke out a few more miles per gallon with the exterior design. There are active grille shutters that close at higher speeds to reduce drag, plus a flat belly pan to further help with aerodynamics and a spoiler in front of the muffler to reduce drag.

Overall, the Kia Niro looks like any other small SUV or hatchback. It’s got the same grille as the rest of Kia’s lineup, as well as nicely sculpted sides and rear. Overall, I think it’s one of Kia’s better-looking cars — less funky than the Soul and more cohesive than the Sportage, whose grille is too small.

Early hybrids — and some still on sale today — were criticized for their “unnatural” feel both stopping and going, especially with continuously variable automatic transmissions. That’s because CVTs, by design, don’t have a shift point like conventional transmissions do — or at least they shouldn’t if their goal is efficiency. Instead, there’s a more “elastic” response. And hybrid brakes, because they’re using braking drag to regenerate power for the battery, can have a grabby or inconsistent feeling.

When the Niro is in its default Eco driving mode, however, it’s hard to tell you’re driving a hybrid. In Sport mode, it’s all but impossible to tell.

That’s mostly because Kia ditched the CVT and put in a six-speed, dual-clutch automatic transmission instead. That means the engine revs up and shifts like a normal car. Also, unlike some other hybrids, there’s not a big change in the car’s sound when the gas engine comes on. Overall, you just pull away from lights. It’s a bit slow in Eco mode, where it feels like a slightly slow normal car. The only clue to its hybrid nature is that the Niro is very quiet when it gets going with only the electric motor working, as it can under some conditions.

In Sport mode, the engine and transmission respond more aggressively and the steering takes on a sportier feel. In this mode, the Niro feels like it can hold its own against — or beat — conventional cars in the subcompact SUV class, such as the Honda HR-V, Chevrolet Trax and Jeep Renegade. It’s the mode I suspect a lot of owners will consistently use thanks to the performance improvement.

Finally, the brakes are very good for a hybrid. They’re a bit mushy and vague, but there’s none of the weird, grabby action you can get from other hybrids, like the Chevrolet Volt.

The Kia Niro’s most fuel-efficient trim, the FE, gets an EPA-estimated 50 mpg combined. The versions Kia expects to sell the most of are the LX and EX, which get 49 mpg combined. I tested a loaded Touring model, the highest trim, that’s rated 43 mpg combined.

City estimates are as follows: 52 mpg for the FE, 51 mpg for the LX and EX, 46 mpg for the Touring. On the highway, where hybrids generally return lower mpg, the Niro FE is still rated a decent 49 mpg. The LX and EX are rated 46 mpg on the highway and the Touring is rated 40 mpg. Conventional competitors can’t come close to the hybrid Niro: Front-wheel-drive versions are rated 25/33/28 mpg city/highway/combined (the Trax); 28/34/31 mpg (the HR-V); and 24/31/26 mpg (the Renegade, which requires premium gas and has a manual transmission). Compare the competition here.

What’s noteworthy is that, unlike the Niro, the HR-V, Trax and Renegade can also be had with all-wheel drive. For some buyers, that may be a significant enough factor to opt for one of those little SUVs over the hybrid.

When it comes to just gas mileage, though, Kia admits the ubiquitous Toyota Prius is still the 800-pound gorilla of the hybrid market. Against that car’s EPA-rated 54/50/52 mpg, the Niro falls short — but only by an estimated 2 or 3 mpg if you discount the option-heavy, and thus actually heavier, Niro Touring.

It should be noted, however, that those ratings are for the car’s default Eco mode. Lower mileage can be expected in the more aggressive Sport mode, though Kia said it hasn’t had the car tested to see how much lower.

Kia said there will be a plug-in-hybrid version of the Niro coming around October or November 2017 that’s intended to have up to 26 miles of electric-only range. Stay tuned for further details.

Kia does a lot of things right with the interior, though I drove a top-of-the-line Touring model. The seats were comfortable, with good support and a leather-trimmed seat that looked and felt good. Lesser trims get either plain cloth or cloth and leather seats.

After that, the surfaces you touch — the center armrest, door handles and doorsills — are soft and feel good in quality. While there is a lot of hard plastic in the dash area, it looks good and isn’t the sort of thing one normally touches while driving or riding anyway.

What’s interesting, though, is that unlike hybrids like the Prius, the Kia Niro has no large center screen to display the car’s efficiency and/or whether it’s getting most of its power from the electric motor or the gasoline engine. It further drives home Kia’s intention to make a hybrid that doesn’t scream “Hybrid!” at every opportunity. Outward visibility is very good. The windshield pillars are thin enough, and they’re set at a good angle to allow you to see out. (Often I find that when a car is designed to be aerodynamic, the windshield pillars tilt back and make it hard to see.) Also, you sit higher in the Niro than in other hatchbacks, such as the Mazda3 or Ford Focus, which further helps visibility.

Finally, for such a small car, the Niro hybrid is roomy. I had plenty of headroom in the rear seat, and my legs weren’t cramped. I’m about 6 feet 2 inches tall, so that’s a nice thing. My legs were angled a bit, leaving my knees higher than my hips, but it wasn’t bad enough to be a problem on a longer commute if I were riding in back.

The Niro features both Apple CarPlay and Android Auto as standard equipment. Touring models have an 8-inch touchscreen, while every other trim gets a 7-inch screen.

The key for me, though, is that the Niro — in all trims — uses Kia’s UVO system to move between the car’s various multimedia and navigation systems. It’s been my experience that UVO is quick and easy to use, and my time in the Niro proved no different.

The Kia Niro’s cargo area isn’t bad. I generally find hatchbacks easiest to load a wider variety of items into, and the Niro is no exception. If you’re cross-shopping the Niro with the Prius, though, the Prius is bigger; I find it to be among the easiest cars to load things into. The Niro’s one advantage, though, is that it doesn’t have a lip on the cargo area to snag things, as does the Prius.

As much as Kia wants to define the Niro as a crossover, it’s probably best to think of it as a small hatchback when it comes to storage. I think it could take four people and their roll-aboard luggage to the airport, but I’m not sure how it’d do if those same four people had bigger bags.

As of this writing, the Kia Niro has not been crash-tested by the Insurance Institute for Highway Safety. If it is, results will appear here.

Kia is probably wise to play up the car’s un-hybrid attributes, as today’s cheap gas usually leads buyers to consider less-efficient cars and SUVs. As a small car, the Niro is pleasant — if not exhilarating — to drive. Its hatchback styling offers a little more utility than a sedan, and it will save you some money at the gas pump. Even if gas is cheap, that’s still money you can spend elsewhere.

Shoppers who want a car that, through its styling and attributes, loudly exclaims, “I’m trying to save the planet by getting great gas mileage,” will be disappointed with the Niro. I’m not sure the rest of car buyers will feel the same way.

We’ll find out this month, when the first Kia Niros are expected to go on sale. Pricing hasn’t been set, but it’s expected to range from around $23,000 for an FE up to around $32,000 for a loaded Touring model.

Not built to last

I drove this car very gently and the transmission went out at 80k miles, thank God it was still under warranty but I traded it in. I will never buy another kia again. Also, the interior started falling apart after 2 years.

Very nice interior for the type of car. Has all the bells and whistles plus some. I’m 6’4” and have plenty of room! Love this car!

My Niro is a LEMON!

While driving home from work last Thursday, my 2017 Kia Niro instructed me to immediately pull over and call Kia's "road-side assistance." At least three times in as many years the car has shut down and forced me to pull over. I immediately had my car towed to my local Kia dealer who once again told me it was a minor "fix" and the repairs would covered under the warranty. This has the common response each time my car has been TOWED to a KIA dealership, and each year when the weather gets warm I am left stranded on the side of a hazardous and busy freeway. As the original owner of my Niro, driving less than 10,000 miles each year it is readily is apparent that my car is a LEMON! After three years of patiently believing the Kia service departments when they tell me that my car has been fixed, only to be stranded once again, I have come to the realization that the only professional recourse would be for Kia to refund my money.

Rating breakdown (out of 5):
1 person out of 1 found this review helpful. Did you?
Show full review
See all 287 consumer reviews

All model years for the Kia Niro