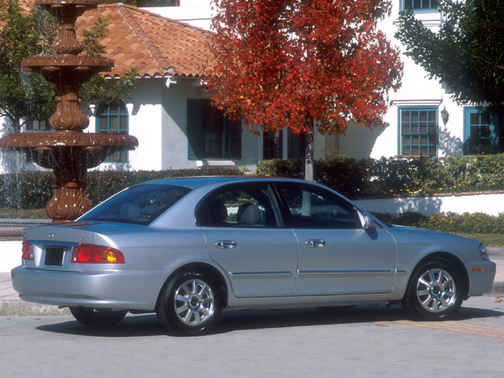 Our 2001 Kia Optima trim comparison will help you decide.

The voice on the other end of the line was saying, “We’re going to get you a Kia Optima to test drive.” Despite heroic efforts to mentally bury my worst fears, three words raced through my brain: cheap, underpowered, small. Thankfully, fears do not always translate to reality, and the 2001 Kia Optima SE sedan I recently climbed into revealed how far the Korean automaker has come in raising the bar of quality transportation.

Historically, Kia’s niche has been selling motor vehicles that are cheaper than most. And it was no surprise that paying less meant sacrificing much of the quality and many of the amenities found in pricier autos sold by bigger automakers.

The Optima is Kia’s attempt to break the mold — which it does. Optima is the largest and fanciest vehicle Kia has brought to the United States. And the $22,269 bottom line on my test model certainly topped the prices I’ve seen on past Kia offerings. No surprise there. The Optima was built for the purpose of competing against two midsize segment heavyweights — the Toyota Camry and the Honda Accord.

How about the Honda Accord? The base DX sedan starts at $15,400, but that translates to a four-cylinder engine and a list of appointments much smaller than that found on my Optima SE. The Honda LX sedan with a V-6 starts at $22,400.

Get the picture? Kia is using the tried-and-true formula of loading up a sedan with standard features and pricing it well below the competition.

And then there are the warranties.

And, by the way, the Optima was just plain nice.

The interior was quiet, comfortable and capable of transporting five adults — not a given in many so-called “midsize” four-door models. Standard interior features included a pleasant AM/FM/cassette/CD sound system, an eight-way power driver’s seat, an all-power package (windows, locks, mirrors), wood-grain accents, a leather-wrapped steering wheel and a power moonroof.

Amazingly, the short options list included anti-lock brakes — a $795 charge to the bottom line. Why Kia included so much in the standard package and left out ABS is a mystery to me.

Still, the sum total is impressive. Throw out the optional $995 leather package on my Optima SE and the $80 in floor mats, and the well-appointed car would list for just a few bucks over $21,000 (including a $450 freight/handling charge).

Not a bad deal at all, especially given the surprisingly nimble handling characteristics of the sedan. The Optima SE performed well during acceleration, braking, freeway driving, city driving and uphill climbs.

The off-the-line bursts were robust enough that I was tempted to get out of the car and read the nameplate, just to make sure it really was a Kia-made car I was driving. The V-6 is not meek machinery.

The Optima upgrade has been expected since Hyundai’s late 1990s acquisition of Kia. Hyundai has been upgrading its U.S. offerings for years, with the Hyundai Santa Fe sport-utility vehicle being a recent, prime example of a Korean-made vehicle seriously competing against deep-pocket competitors.

However, Kia’s U.S. mission with the Optima will not be easily accomplished. Despite a saucy television commercial that favorably touts Optima’s standard features and price compared with a Camry, it won’t be easy to compete against the popular Toyota make or the much-loved Honda Accord.

Toyota and Honda have the advantage of supremely established — and for the most part, deserved — reputations among American car buyers for building quality autos. Kia, on the other hand, is battling not only that but also its own past reputation for producing economy cars that lacked juice and comfort.

Reputations aside, if you’re looking for a nicely priced sedan with some pop and enough comforts to please a modest family, the Optima is worth a serious look.

Kia Optima at a glance

Most reliable vehicle I ever owned

This car is great for the highway with plenty of head space and leg room. You easily soaks up luggage. After over 18 years of owner I'm looking forward for my next purchase from Kia.

I have had to replace the alternator, battery, gas lines, fuel filter, and my a/c compressor needs replaced. My car still dies on me at random points while I am driving.

October 12, 2012
By Watched too much Top Gear from Winchester, TN
Owns this car

Bought this car (2001 Kia Optima SE V6) at 90k miles and have had it for two years. In a word, this car is average. The engine (V6) is sufficient, but not exactly exciting. The 4-speed automatic transmission is outdated and less than ideal. The shifts are slow and slushy and it likes to put you in 4th as soon as possible and leave you there. On a more positive note, the car carries its weight low and the suspension has a good balance between firmness and comfort (for my preference at least). There is quite a bit of road noise, but it handles better than expected. I get between 20 and 25 mpg depending on how i drive it. The interior is roomy (I'm 6'5" and have just enough head room, but plenty of leg room) and trunk space is very good. I find the leather(?) seats a little flat and hard. I'm over 100k miles now and reliability has been fairly good. The bearings will need to be replaced at about the 100k mark, but (radio death and bits of chrome falling off aside) the old girl is holding together well. As a whole, the car has a slight sense of cheapness about it, but that's because it is cheap. If you're looking for a used family sedan, this is a good alternative to a Camry or Accord, and chances are you can save a couple of grand. This car can be a good buy if you inspect it first and keep in mind that this is neither a sports nor a luxury car. It will, however, get you where you need to go, and just might grow on you. It has me. 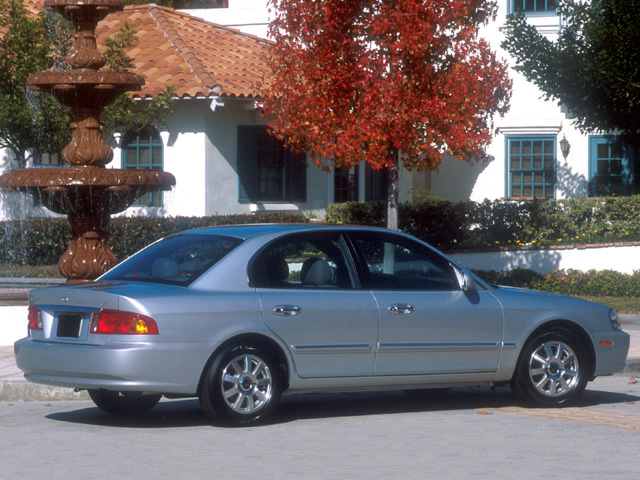 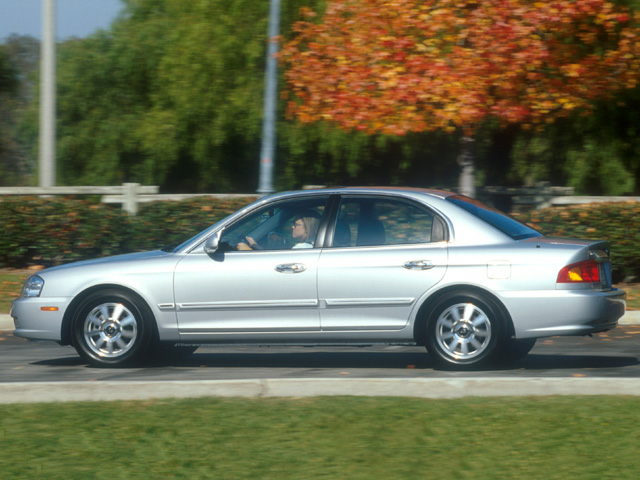 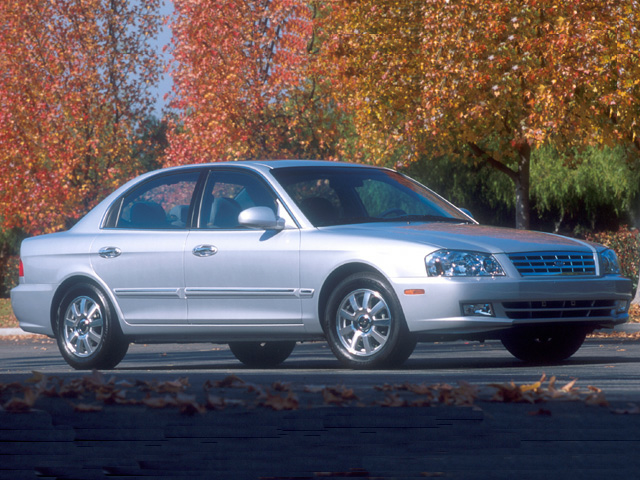 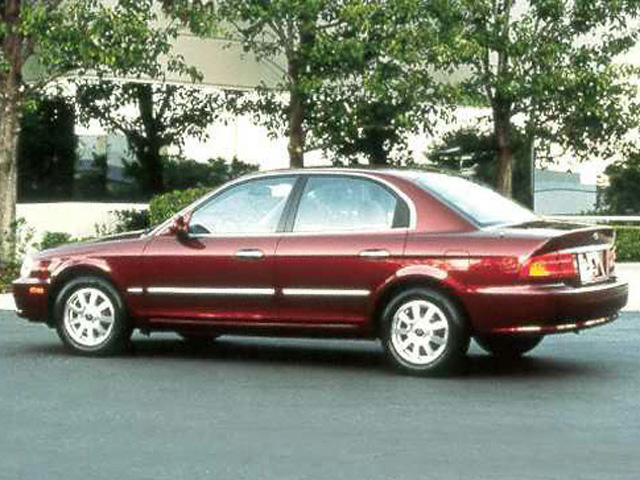 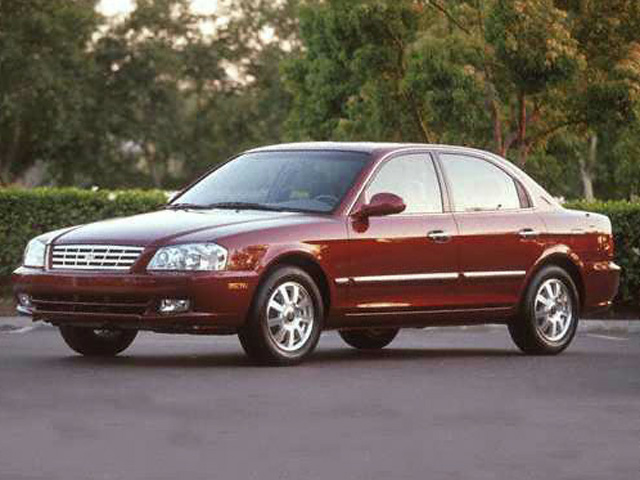 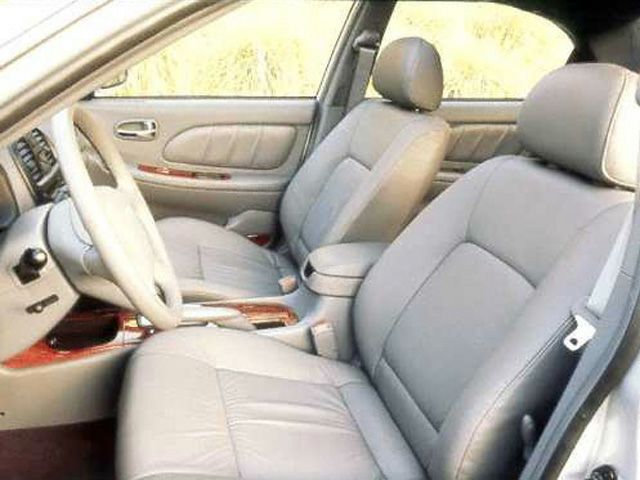