Our 1993 Nissan 240SX trim comparison will help you decide.

With apologies to George Gershwin, it soon will be Summertime and the Drivin’ Is Easy. And there is no better way to enjoy warm-weather motoring season than in a convertible.

Taking advantage of this is Nissan Motor Corp., which will be offering the company’s first softtops in more than 21 years.

The Nissan 240SX convertible is expected to debut locally late this month. It will be the first open car from Nissan since the 1971 Datsun 2000 roadster. The 300ZX convertible will be in showrooms this summer.

“We were originally promised the 240 convertible by the end of April,” said Jeff Drake, general manager of Collins Nissan. “But now it doesn’t look like we’re going to get the first one until around the end of May.

While the 240 convertible is not reaching the market until rather late in the production year, Nissan has elected to call it a 1992 Limited Edition model. The 300 softtop, however, will be titled as a 1993.

“They’re good- looking cars,” Drake said. “They are going to build a lot of showroom traffic.”

Nissan regards both convertibles as sports cars. But the purists are going to point out the 240 has a back seat and essentially is a derivative of the 240SX two-door hardtop.

The 300 is a derivative of the 300ZX coupe, which has been anointed as a two-seater, true-blue sports car. But for the ’93 convertible model, Nissan has incorporated 52 new body pieces and modified seven others in order to replace the rigidity imparted by the coupe’s roof.

The 240 also has some added pieces, but nothing as comprehensive as the 300. The 240’s reinforcement is completed by the American Sunroof Corp., which installs windshield header reinforcements, rear bracing components, fixed B-pillar posts that house the seat belt assembly, and the top stack assembly.

Although there were 52 new pieces involved in constructing the 300 convertible’s body, Nissan says enhancing the body’s rigidity was not all that big a deal, due to the inherent structural rigidity of the ZX coupe.

Reinforcement modifications included additional bracing and the use of thicker sheet metal in the door sill/floor area, and reinforcement of the rear cross member, steering member and instrument panel cross member.

An added styling feature, as well as structural feature, is a Targa bar that is part of the fixed B-pillar rising behind the two seats. On the 300, the convertible top is manually operated. On the 240, the top is power operated.

None of the ZX’s reputation for sports-car performance is lost on the open-air version. The car retains the coupe’s classic design of front engine/rear drive, as well as the coupe’s balanced handling traits.

Contributing to the handling is a viscous-controlled limited slip rear end that distributes power to the driving wheels in fast corners. Also helping are low-profile, high- performance radials on 16-inch wheels; they put a maximum tire footprint to the road.

Nissan says the convertible can be expected to stick to the pavement through high-speed turns in the same manner as the coupe.

Not too bad an idea, because under the hood is a 24-valve V-6. For the convertible, the company is offering its non-turbocharged, four-cam, 3.0- liter V-6. This four-valves-per-cylinder engine is good for 222 horsepower and 198 foot-pounds of torque.

Some speed demons would have preferred the 300-horsepower turbocharged engine, but that might have entailed a lot of additional and expensive body structure work to handle the increased power.

As it is, the coupe is not exactly inexpensive, and the convertible can be expected to be even more costly.

An e lectronically co ntrolled four-speed automatic is the only transmission available for the 240SX softtop. It is mated to a 155- horsepower, 2.4-liter, 16-valve, four-cylinder engine.

The ZX still gives drivers a choice between a five-speed manual gearbox and an optional electronic four-speed automatic.

As with the coupe line, the convertible ZX has a long list of standard equipment. Highlights include a luxurious leather-trimmed interior, a driver’s-side air bag, a deluxe AM/FM cassette audio system with power antenna, and a full complement of power operated systems.

Obviously, at $35,000 to $40,000, the 300ZX softtop is very much upscale, and is aimed at upscale buyers. The primary buyers are expected to be professional, career-oriented men.

Women buyers are expected to be attracted more to the 240 softtop rather than to the ZX with its muscle-car orientation. The SX’s power-operated top and its automatic transmission make the car extremely convenient. Its base selling price of less than $22,000 also broadens the SX’s appeal.

With a dual-cam, 16-valve four-cylinder driving the rear wheels, the open-air 240 is a sporty proposition. It may not have the top speed of the 300, but its handling characteristics, courtesy of four-wheel independent suspension, and its additional passenger capacity create a niche for the car.

“We expect to sell more 240s than 300s,” Drake said. “Of course, the price differential accounts for a lot of that.”

July 22, 2020
By tidentenn from Kingston
Owns this car

Durability and low cost of ownership combined with a blast to drive. Best of both worlds. I've owned two and would buy one new if still made!

I get compliments all the time when I drive it. It is a fun ride since it is a convertible. Stylish outside.

All model years for the Nissan 240SX 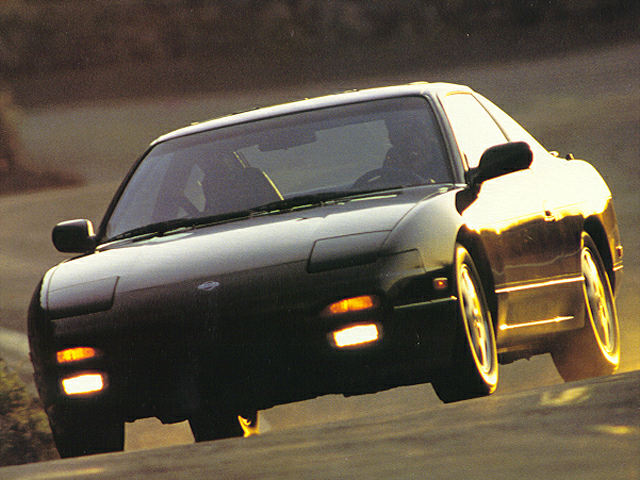