Our 2000 Nissan Quest trim comparison will help you decide.

Welcome to the limovan, the 2000 Nissan Quest SE.

Technically, it’s a minivan that’s classified as a truck, which makes no sense at all.

There is nothing truck-like about the thing. And other than its shape, there’s not much “minivan” about it, either.

There are leather seats and nice carpeting, of course. But you’ll notice that the interior space, though ample, is not as large as that found in a standard minivan, such as a Dodge Caravan or Toyota Sienna. The dimensions are smaller, akin to those of a luxury car.

The feel is that of a rich sedan, too. The leather seats are perforated, allowing them to breathe. That makes them more comfortable in hot and cold weather. Chrome covers the interior door handles for an additional touch of elegance.

Standard onboard info-tainment systems in the Quest SE include sound and video &#151; a seven-speaker, 130-watt AM-FM radio, cassette and CD player, as well as a videocassette player with a 6.4-inch screen mounted in the center console.

In all, there are seven cup holders and 31 storage spaces within the Quest SE. There are two illuminated visor vanity mirrors, power windows and locks with illuminated switches, and a remote keyless entry system that illuminates the interior when activated. You can install a phone and fax transceiver, as well as other electronic goodies, if you wish.

Neat stuff. But it leaves me feeling weird.

It’s an AWE (Acute Wealth Effect) problem, a shocking disconnect between the excesses of the moment and the practicality of the past.

This is supposed to be a utility vehicle, a simple hauler of people and cargo. That was the case with the first minivans, those produced by Chrysler Corp. in 1984. Those early vans were elongated boxes on wheels, designed to carry up to seven people and their baggage. Families bought them. Moms drove them. They were soccer buses, troop carriers, surrogate station wagons. They also were affordable, which means they weren’t about image.

But image sells, especially in a society where few people want to be ordinary and in an economy where many can afford to be different. That’s why we’re getting so many crossover vehicles &#151; pickup trucks with sedan doors and seating, sport-utility vehicles that look like expensive station wagons, and expensive station wagons that function like sport-utility vehicles. It’s a very short distance from there to the minivan as limo.

None of this is to say that the 2000 Quest SE totally lacks practical value. Like its structural and mechanical twin, the Mercury Villager, it has one of the most useful cargo floors of any minivan, large or small. Credit the Quest Trac Flexible Seating System, which allows the easy movement and rearrangement of middle and rear seats to create ample carrying room.

There is an optional Quest Smart Shelf, which can be reconfigured to carry baby strollers and other items. You can also outfit the Quest to pull a trailer weighing 3,500 pounds, which should give you enough space to bring a butler and kitchen staff.

Praise: With five or fewer occupants, the front-wheel-drive Quest becomes a comfortable, enjoyable, posh highway cruiser. There is no such thing as a boring trip in this one.

Head-turning quotient: As is the case with its twin, the Mercury Villager, the Quest is one of the best-looking minivans on the market, especially with two-tone paint.

Ride, acceleration and handling: Everything about the way it moves and handl es says la rge family sedan. There’s nothing trucky about it. Acceleration is surprisingly good.

Engine: All 2000 Quest models (base GXE, SE cloth, SE leather and top-of-the-line GLE) are equipped with a 3.3-liter, single-overhead-cam V-6 designed to produce 170 horsepower at 4,800 rpm and 200 pound-feet of torque at 2,800 rpm. The engine is mated to a standard electronically controlled four-speed automatic transmission that exhibits very little downshifting on uphill grades.

Only car I have owned since I moved to the USA.

It is great on saving gas money and it cam also take up to 7 people with the driver included. I like the comfort of it, it is very spacious and I love how it is wide rather than long.

2000 Nissan Quest: Great until it misfires

My family bought a used 2000 Nissan Quest in the winter of 2010. It had less than 70k miles on it at the time of purchase. For over three years, it served us without any serious problems. In the summer 2013, the distributor went out on the middle of the interstate at night. It was replaced with a Cardone Select Unit, after which the van operated without issue for a year. In 2014, the car failed emissions due to the knock sensor triggering the check engine light. We had the shop do spark plugs, PCV valve, and knock sensor replacement to get the emissions waiver in our state. Ever since that shop replaced those parts, the van had a random, intermittent misfire (ODII code P0300). I felt later on that the shop had done something wrong, but I made the mistake of not taking it back to them immediately. I thought it was a distributor issue, since it felt very similar to the first time the distributor died out on me. This time I installed a Rich Porter NS60. It did not improve the misfire at all, and I contacted Rich Porter, whose warranty covered me for a free replacement, which also did not fix the misfire/idle shimmy. The misfire was improved--but not cured---after a new Hitachi MAF sensor and front catalytic converter were installed. This one mechanic who I really trusted told me that he "could tell it was a vacuum leak, but I can't put my finger on where exactly". He said there was a very distinct sound in the idle that could only be produced by a vacuum leak. However my parents did not have the patience to keep the van and sold before we found out. Overall, it was a good van--but my advice to anyone looking at a 99-02 Quest or Villager (basically the same platform) is to be sure that you have a mechanic who can set the distributor timing to 15 degreees BTDC (before top dead center), to ensure your distributor has the longest life span. A lot of people are lazy and think that they can install the distributor without setting the timing BTDC because the vehicle must be lifted to set the timing. The 99-02 Villager/Quest had optical distributors which were not the best, but to be honest the OEM distributor lasted us 3 years without issue whereas the Cardone Select and Rich Porter distributors were not noticeably better (this contradicts the advice I got from the Villager Quest Owners group on Yahoo). It is not that easy to work on--there is a large black cowling which is blocked by a bunch of stuff. The cowling blocks most of the fuel rail and the rear three fuel injectors. So there is not much space in the engine bay to work on the car without removing a bunch of parts first. However in comparison to other cars I've experienced, you could definitely do far worse than a 99-02 Quest/Villager.

It's a great van for family. Good engine performance - high torch at low RPM makes the van very responsive when you step on the gas pedal. Owned van for a long time and never had any mechanical issue. It still runs like a pony at high mileage. If you need a workhorse, this is it. If you are looking for a flashy one, look other way ;-). All the designs are very well-done for practical use. Some people mentioned the sticking gas pedal when start from stop. Be reminded that this is NOT the same issue as the Toyota gas pedal issue. This is not safty related. It's caused by a dirty air intake. I followed the instruction of cleanup and it went away. Overall very happy with the van and it is still working like a horse... 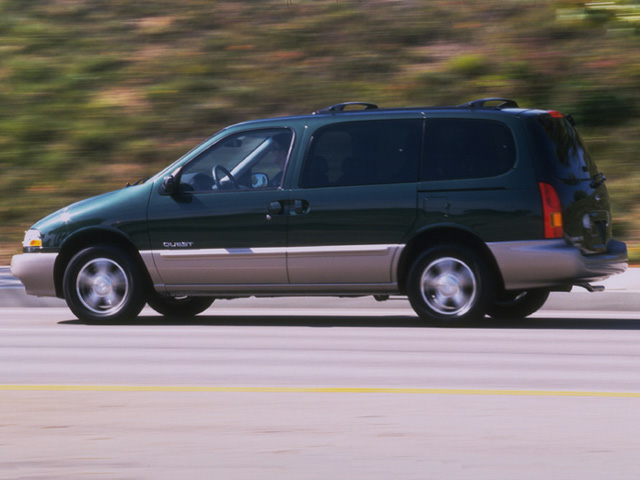 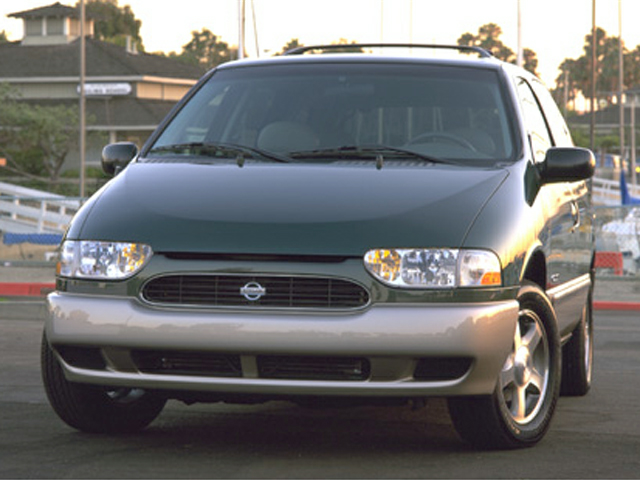 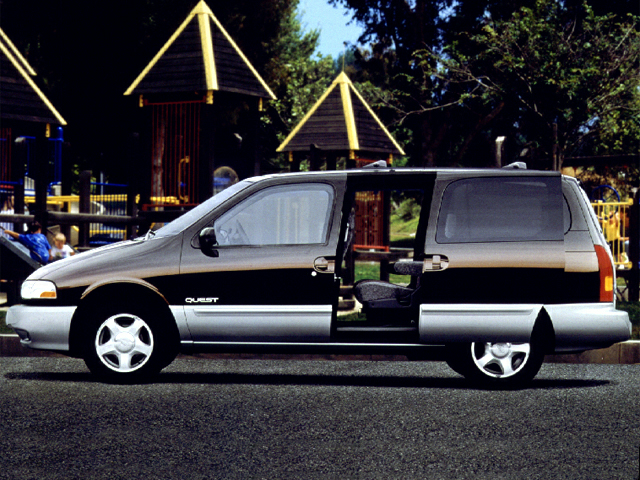 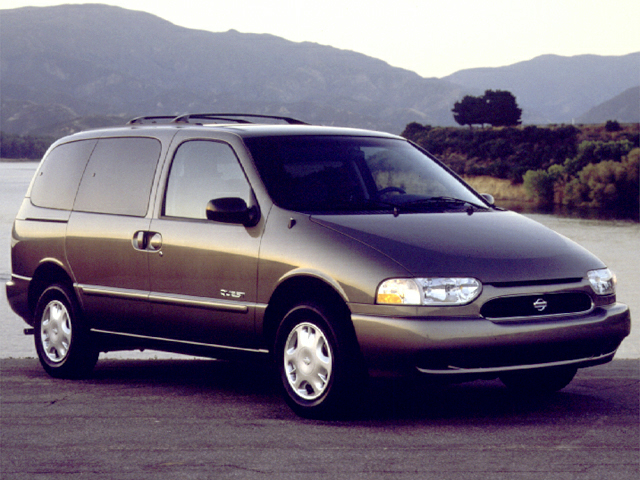 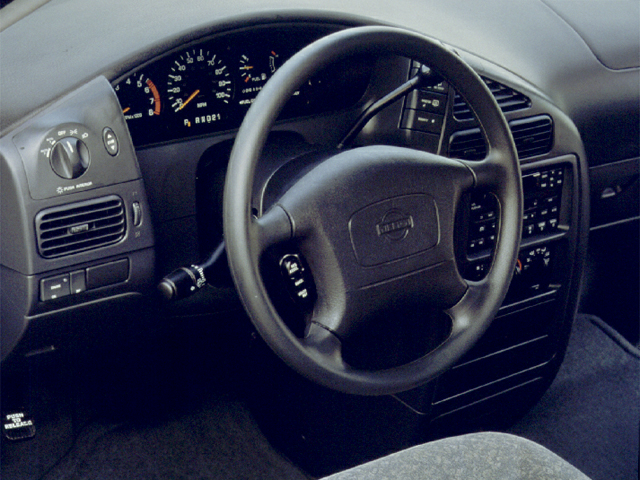 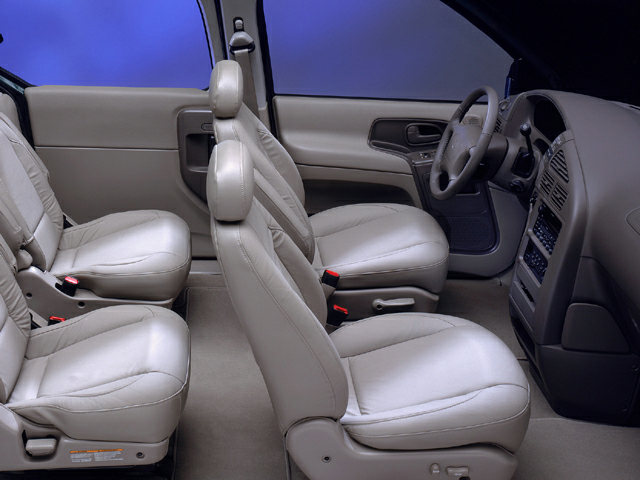