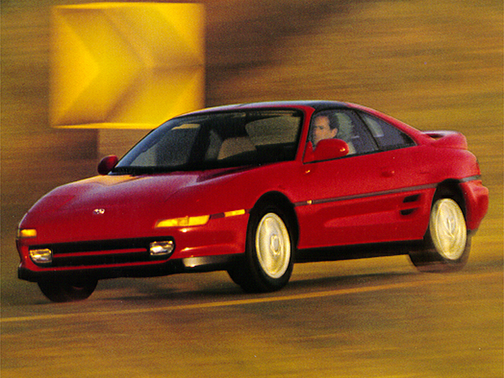 Our 1995 Toyota MR2 trim comparison will help you decide.

The high-powered Toyota MR2 Turbo sports car, once honored for delivering ”the most bang for the buck,” is going out with a whimper.

This mid-engine two-seater – dubbed a baby Ferrari by some- will fade into automotive history at the close of the 1995 model year, ending an 11-year production run and leaving its mark as probably the best-all-around two-seater sports car any Japanese automaker ever built.

Yes, I think the MR2 is a better car than the $81,000 Acura NSX. The zero-to-60 mph performance is nearly equal, and the MR2 has a more fluid and original appearance.

When the MR2 fails to appear on the showroom floor this fall with the rest of Toyota’s 1996 models, it’s very likely that few people will notice. But the automotive world will be slightly less rich because of it.

Toyota sent just 265 MR2s to the United States for the entire 1995 model year. Only 895 were sold here last year. Sales, in fact, have been winding down for the past three years.

The history of the MR2 is very simple to follow, and there is a lesson here for other automakers who want to sell sports cars to youthful buyers: As the price goes up, the sales will go down. You can’t build a car for young people and price it for well-heeled middle-aged buyers.

One look at the price of this week’s fully loaded test vehicle tells you why the MR2 is finished here. It costs more than $33,000. You could buy a new Chevrolet Corvette coupe or three base model Plymouth Neons for what our blazing red test car costs.

The major reason the MR2’s price is so high is because the car is built in Japan and is subject to the unfavorable currency exchange rates that are driving up prices of Japanese-made cars in the United States.

That said, I freely and loudly admit that I love this car. The MR2 Turbo is my all-time favorite sports car, the one vehicle I would buy if I could only own one sports car for the rest of my life.

If you’ve never been in or driven an MR2 Turbo, it might be easy for you to dismiss this little elegy of mine as just so much blather. But those of us who have experienced this car know otherwise.

Mounted sideways behind the cockpit is a turbocharged, 2.0-liter, 200-horsepower engine with double overhead cams and 16 valves. Very few cars produce 100 horsepower per liter – the $70,000 Lotus Esprit is the only other sports car that does that comes to mind.

When you first start the MR2’s engine, you hear a throaty but muffled rumble from the twin chrome exhaust pipes. Oddly, the sound gets quieter, not louder, when the engine is revved.

Our test car came outfitted with a fast-shifting, five-speed manual transmission. The non-turbo model, which has a 2.2-liter, 135-horsepower four-cylinder power plant, can be equipped with a four-speed automatic or a manual.

I can’t imagine this car with anything but a stick shift. The stubby, leather-covered shifter barely pokes out of the full-length floor console. As you grasp the fat end of the shift knob and apply a little pressure, the shifter notches easily through the gears.

It took me quite a while to learn how to shift this car smoothly. The somewhat stiff clutch is very fast-acting, meaning that just barely letting up on the pedal engages it completely.

In any case, the engine loves to be revved high and driven hard and fast. To some ears the iron and aluminum engine might sound a bit harsh when revved, but I feel that its growly nature is in keeping with a true sports car. In a two-seater, you want to hear the engine as it revs. After all, the right mechanical noises help give a sports car its character, and the MR2 has plenty of character and style.

The turbocharger doesn’t engage much in first gear unless you floor the accelerator. In fact, it really only engages when you place a load on the engine, doing s mething such as, say, accelerating quickly in third gear. In such instances, the turbocharger winds up, blasting a denser mixture of fuel and air into the cylinders and sounding similar to the high-pitched whine of a dentist’s drill.

Toyota says that accelerating from zero to 60 mph takes just 5.9 seconds, making the MR2 one of the world’s 20 fastest regular production cars.

On a long road trip, the MR2 cruised quietly and efficiently. It sipped premium unleaded at the rate of 28 miles per gallon on the highway. It got 22 mpg in the city.

Beauty is more than skin deep on the MR2 Turbo.

In addition to the dynamo of an engine, the MR2 is blessed with a superb suspension system that lets the driver explore his driving skills without having to worry about whether the car is up to dealing with strenuous maneuvers.

The four-wheel independent suspension system enables the MR2 to hold the road as well as or better than any of the more expensive and exotic sports cars I have driven.

Accelerating hard as you come out of a curve is one of the most fun ways to enjoy the MR2’s superb handling abilities. No matter how fast you go, the MR2 hangs onto the road with absolute tenacity. The body does not lean much, and because it is so low to the ground, you feel completely safe pulling off maneuvers that might make for dangerous driving in other cars.

The MR2 comes with an electronic/hydraulic power rack-and-pinion steering system that is very tight and crisp. The brakes – anti-lock discs at all four corners – provide abundant stopping power.

The anti-lock system seems a bit unrefined compared with others I’ve tested. There is quite a bit of pulsing at the pedal, but the system stops the car quickly and without fuss.

The MR2 is one of the few cars that is always entertaining to drive.

Because sports cars tend to be driven very hard, they don’t always hold up as well as the average family sedan. Trust in the MR2’s mechanical integrity is another reason why I like it so much. No one builds higher quality cars than does Toyota, and the MR2 is no exception.

The car feels completely unbreakable. The trim pieces fit together tightly and are made of durable, high quality materials. The perforated leather seats, for instance, are truly excellent in looks, comfort and design.

You can’t help but notice the thickly padded dash and the attractive carpet. The doors, trunk lid and hood close with a solid thunk.

Our test car came with removable T-tops, which were free of leaks during a heavy downpour. The tops are easily removed; you pull down on a handle on each panel and lift the panels off, then stow them in the trunk. The T-tops have removable shades; they attach to the inside of the glass panels.

Visibility is another of the car’s strong points. The MR2’s nose slopes gently downward, giving the driver a clear view of the road. Rear and s ide vision also is good.

Toyota says it is discontinuing the MR2 in the United States because its low sales don’t justify developing a new model. Sales will continue in Japan.

The average driver doesn’t need more speed. The MR2’s handling prowess is among the best in the world. There is nothing wrong with the car’s baby Ferrari looks, and its quality and dependability are without question.

Truett’s tip: The MR2 Turbo is one of the world’s highest quality and best-engineered sports cars. It’s as fast as a speedingbu let and a joy to drive. 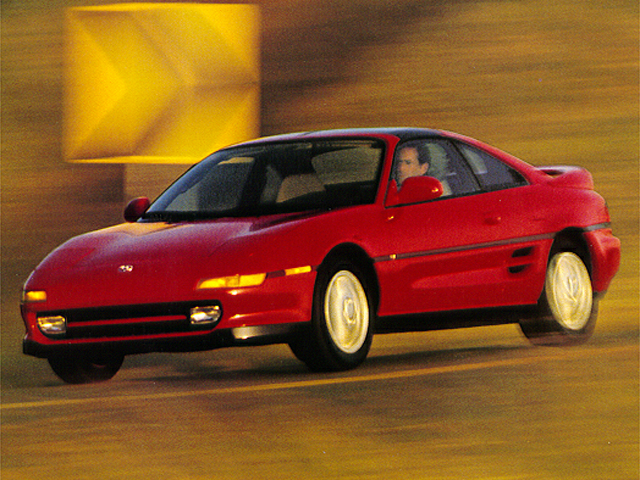