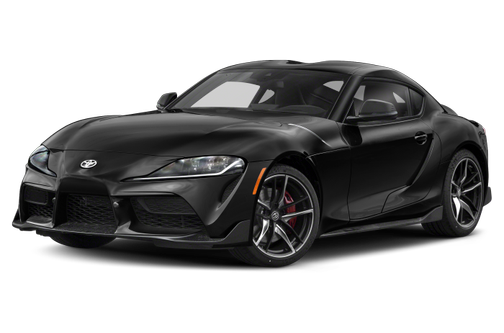 Our 2021 Toyota Supra trim comparison will help you decide.

The verdict: The 2021 Toyota Supra’s new four-cylinder makes the sporty coupe more accessible, but the six-cylinder’s attitude and raucousness is the best way to get the Supra experience.

Versus the competition: It’s the Supra’s wild design and nostalgia that make it unique versus any objective performance numbers.

Only one year after being reintroduced to the world, the 2021 Toyota Supra has a lot of new stuff going on, including a new entry-level turbocharged four-cylinder version and a beefed-up, more powerful turbo six. Named the GR Supra 2.0, the 2.0-liter four-cylinder’s 255 horsepower looks pretty weak on paper. Just 255 hp? In a Supra? After all, a Toyota Camry family sedan’s V-6 has 301 hp, and the GR Supra 3.0 with a six-cylinder now has 382 hp. However, this is a classic case of how specs can be misleading.

Related: 2020 Toyota Supra First Drive: More Than the Sum of Its Parts

The not-so-secret is that the Supra’s new turbocharged 2.0-liter, like the six-cylinder, is BMW-sourced; pop off the spiffy Toyota engine cover and you’ll be greeted with many BMW logos on harnesses, hoses and modules. Because it’s a BMW engine, the paltry 255-hp rating feels like a much more substantial 300 hp. Having a rated 295 pounds-feet of torque helps, too. In other BMWs, this engine out-accelerates its rating, so we think either 255 hp is conservative or the driveline that delivers power to the road is unfathomably efficient — and it’s a similar story in the new four-cylinder Supra.

How the Supra 2.0-Liter Accelerates

The 2.0-liter has the grunt I’ve always wanted from the Toyota sports car formerly known as the Scion FR-S, currently called the Toyota 86. Toyota says the four-cylinder Supra is an intermediate model between the 86 and the Supra six-cylinder. The four-cylinder Supra does feel like a heavier Toyota 86 with some real gusto under the hood, though it’s missing the lightness (the Supra 2.0 is 400 pounds heavier) and sharpness that make the 86 such an entertaining ride, even sans 50 hp; maybe it’s only the tight confines that feel 86-ish. Supra 2.0 pricing hasn’t been announced, but I wouldn’t count on it being very intermediary because this is, after all, still a BMW-based model (BMW Z4).

Toyota says 0-60 mph is 5.0 seconds for the four-cylinder, which compares with 4.1 seconds of the 2020 Supra six-cylinder and 3.9 seconds for the updated 2021 Supra six. All Supras use the same eight-speed automatic transmission (including the gearing) that clicks off quick, crisp shifts and is rarely tripped up.

Making the Supra 2.0 more affordable de-contented it in a way that doesn’t change the way it looks or feels to most people, but for the discriminating enthusiast, it’s all in the details. The front brakes go from four-piston fixed caliper Brembos to a single-piston floating caliper, and the front brake rotors shrink from 13.7 to 13.0 inches. The tire models are the same — Michelin Pilot Super Sports — though in 18 versus 19 inches in diameter, but with identical tread width. What’s not the same is the wheel’s construction, which on the 19-inchers is the more desirable forged aluminum versus the four-cylinder’s cast aluminum.

In addition to missing 127 hp from the new six-cylinder, you also lose the option of a head-up display, heated seats and adaptive cruise control. The six’s standard adjustable-firmness suspension is replaced by a fixed one and there are no power seats. Say goodbye to a limited-slip differential, and the under-hood strut-tower braces that are new in the 3.0 don’t show up here, though they seem like an easy add-on later if you decide. Also lost are 219 pounds of curb weight compared with the six-cylinder.

The Supra 2.0 has more of a comfort vibe versus the playful aggressiveness of the Supra 3.0. So much of the Supra’s appeal is in its bratty six-cylinder that snarls, pops and screams. The four-cylinder, while proficient and with respectable acceleration, doesn’t have the same mischievousness of the six or the turbo fours found in a Honda Civic Type R or Ford Focus RS. It also doesn’t have the eagerness in handling, exhibiting slower reactions and a bit more body roll. While I haven’t driven the Supra 2.0 on the track, I don’t think track duty would suit the entry-level car as well considering its more casual feel and downgraded brake calipers, rotors and lack of a limited-slip differential.

Toyota attributes the 14% increase in power to a new exhaust manifold design and a revised piston that reduces the compression ratio from 11:1 to 10.2:1, allowing for more combustion control during high boost. Chassis tweaks include ways to increase roll resistance and enhance cornering stability with aluminum under-hood braces that link each strut tower to a radiator support, as well as tuning of the electric power steering, adaptive suspension, active differential and electronic stability system. The result? You won’t likely notice it on the street or when not at the car’s limit. I didn’t observe any transformative handling during street driving, and I suspect they’re differences you’d most be able to discern on a track driving the 2020 and 2021 back-to-back.

One thing that hasn’t been tweaked, however, is the awful wind buffeting effect around 45 mph with the windows down. You’ll have to fix that one yourself through any number of aftermarket options or get creative during a hardware store run.

Truth be told, I’ve been slow to find appreciation for the Supra, even after driving three different versions in the space of a few weeks. The 2020 base car was $52,000, so I expect the new model with upgrades to cost more. My entry-level Supra 3.0 didn’t have Apple CarPlay or adaptive cruise control — you know, things that come standard on $20,000 Toyotas (the downside of being BMW-based). I don’t think the Supra has many performance advantages compared with a less expensive car like the Ford Mustang GT with one of its Performance packages (your pick, 1 or 2), Chevrolet Camaro SS with Magnetic Ride Control (or 1LE) or even a Honda Civic Type R — I’ve clocked a 10-speed auto Mustang GT at 3.9 seconds to 60 mph and a six-speed manual Camaro SS at 4.3 seconds.

What the Supra does have, however, is a wild flair and a good bit of attitude. In factory form, rather than all-out performance, this car uses style, image and nostalgia to tug at your heartstrings. And that’s why I think the four-cylinder might still be an all right car — it has all the looks of the more desirable Supra 3.0 and you’ll get just as many head turns in a four-cylinder as a bright yellow six-cylinder. It’s unfortunate for six-cylinder owners looking for exclusivity, especially for 2020 Supra owners who got bamboozled out of 47 hp. If you can swing it, the 2021 six-cylinder is no doubt the way to go with its snarling exhaust, more track-ready parts and snappy performance.

The 2021 Supra 3.0 goes on sale at the end of June with limited availability (only 400 made it to the U.S. before COVID-19-related production stoppage), and the Supra 2.0 goes on sale in the fall.

Just bought the 2021 nitro yellow Supra from a local Toyota dealer and loving it every minute of it. The color and performance are just epic. The exhaust sound with sport mode is terrific. Looking forward to joy ride for years to come.

This cars is a blast to drive

This car is everything you read about. It is super zippy and looks just amazing. There are a few interior issues (no sunglasses holder, no sync in climate control, no support for Android Auto) but no deal breakers and everything else is just so awesome. It grips the road and has amazing acceleration. The gas mileage is actually quite good!

Unbelievable fun and performance for the money.

I was not attracted to the GR Supra initially. I was not sure of the exterior styling and the co-development with BMW. The GR Supra was right in my price range and budget so I decided to test drive it. I test drove the 3.0 Premium model. I was blow away by the refinement and smoothness of the engine and transmission. The engine makes a lot of power without any noticeable turbo lag. Lots of usable torque. The ZF 8-speed automatic transmission was among the very best torque converter automatics I have ever tried. It's better then BMW's dual clutch automatic, much smoother and refined. And it shifts up and down at super fast times. It's a better transmission then the BMW DCT. The suspension is supple in normal mode and VERY planted in SPORT mode. In normal mode the car rides super smooth and very quiet for a sports car. It would make a awesome GT Car for road trips. You can easily do many hours behind the wheel in the super adjustable power seats. SPORT MODE transforms the car from Clark Kent to Superman. The steering, suspension, engine mapping, exhaust is totally different. It's like a totally different car. The exhaust in SPORT MODE cracks and pops like a race car. LOTS OF FUN The only negatives I can think of? The wind noise over 50 mph with the windows down is insane. It sounds and feels like opening a door in a air plane or something? Watch your head getting in and out. You will knock you head until you get used to contorting to get in and out. The exterior styling took time for me to get used to. I like it more and more every time I see it. The biggest negative might not be a issue but it would always be in the back of my mind. I am a little worried about Toyota's reputation for legendary bulletproof reliability because it is a joint venture with a not so reliable BMW? I supposed you can always buy a Toyota Extended Warranty? Overall the 3.0 GR Supra is a bargain for it's refinement and performance. The BMW sourced turbo charged engine and ZF transmission are silky smooth. The revised 2021 suspension, steering, etc is noticeable and makes the Supra even better. Not too many cars at this price point are this fun. Toyota and BMW hit it out of the park!