Our 1993 Buick Park Avenue trim comparison will help you decide.

IT WAS A serious car, midnight blue with gray interior. It had afine body, Jaguaresque in appearance. But the dark paint muted thesensuality of that shape. Even the bright molding, wrapped around thecar’s lower panels, seemed bereft of levity.

Still, I liked the thing, the 1993 Buick Park Avenue Ultra. I likedsitting in it. It had big, comfortable, leather-faced seats. And it wasneat the way the instrument panel curved around the front end of thepassenger cabin until it disappeared into the doors.

But I felt a little strange in the Park Avenue Ultra on the SaturdayI drove it. Saturday is get-funky time. But it’s hard to get funky in acar that prefers pin stripes over denim. So I wore a blazer and dressshirt with my jeans, and cranked up the engine.

You should’ve heard that engine! It was deep and throaty — kind ofmade me smile. I mean, here was this car, all proper and everything,with an engine that sounded like a love scene between Madonna and ArnoldSchwarzenegger. Hoooah!

I headed for I-95, bound for New York. The car could move. I washaving a good time until I pulled into the parking lot of the MarylandHouse, a public rest stop along I-95.

Church people were getting off a bus that identified them as churchpeople. Some of them stopped to admire the Park Avenue Ultra, whichlooked clerical in repose.

“Beautiful car, young man,” one of the church ladies said. I glowed.Forty-five years old and chubby, and some woman’s calling me “youngman.” I sucked in my gut, for naught. “You a minister?” she asked.

The Park Avenue Ultra has a softer ride than many of its rivals,especially softer than those from Germany. But that’s okay for the waymost Americans use cars — to commute, shop and take occasional vacationtrips.

There are two models: the base sedan and the Ultra. The primarydistinction between the two is the engine. The base Park Avenue isequipped with a 3.8-liter V-6 rated 170 horsepower at 4,800 rpm, with amaximum torque rating of 225 pound-feet at 3,200 rpm. The Ultra comeswith a supercharged version of that engine rated 205 horsepower at 4,400rpm, with torque put at 260 pound-feet at 2,600 rpm.

Complaints: I wish that the driver’s seat didn’t have so darned manypower adjustments. It’s great once you get it right; but getting itright is an absolute pain.

Also, the side-view mirrors need redesign. They’re small, oddlyshaped things. Getting them angled right is a hassle, too.

A driver’s air bag is standard. But competitors in the luxmobilecategory often come with two standard bags, for the driver and the frontpassenger. Any car named Ultra ought to be a two-bagger.

Ride, acceleration and handling: Excellent ride and acceleration.Handling might leave something to be desired among people accustomed tothe taut responsiveness of German luxury cars. In short, there’s morethan a little float in the Park Avenue Ultra, especially around tightcurves. Braking is excellent.

Mileage: A bout 23 to the gallon (18-gallon tank, estimated 403-milerange on useable volume of recommended premium unleaded), running mostlyhighway with one to three occupants and light cargo.

Purse-strings note: A seriously good luxury value for the money.Compare with any car in the $30,000-plus, full-size luxury category.

Incredible Used Car to Own

July 14, 2015
By President from Spring Hill, Florida
Owns this car

My sister passed and left me a 1993 Park Ave. Ultra with 63,000 miles. The interior on this car really holds up (except for the headliner which is easily replaced). The interior design is exceptional and has clean lines. The 3800 engine is so quick and fast that it is not to be believed with a car this size and delivers 17-27 for mpg. It is also very easy to work on...I changed the oxygen sensor, Mass flow sensor, coils, control module, spark plugs and wires, and all the fuel injectors...all within 5 hours. The seats are so soft and supportive that you could fall asleep while driving. The steering is old school, "one finger" steering. Rides like a big car should, with race car get up and go and small car fuel economy...near the perfect car.

Great car. I got one from my grandpa and it now has over 250,000 miles and I haven't done many repairs. The 3800 is one of the best motors. Still on original timing chain. Everything about this car is solid if properly maintained. Still looks new after 22 years! Gets pretty decent gas mileage for a V6 with a supercharger on it. The comfort is beyond compare. I suffered a back injury when I fell from a bridge on a construction job and this is the only car I have been able to sit in for long periods with no back pain at all. This car has also NEVER left me stranded on the side of the road! Wonderful car. Nothing new even compares.

April 30, 2010
By Avenue from Where the winters are cold
Owns this car

The rocker panels and gas lines rust on the older cars, not an easy fix... I have changed my oil, taking great care of my car and still have the rocker panel issue that is now making an issue on the gas lines, what a bummer for such a smooth ride. 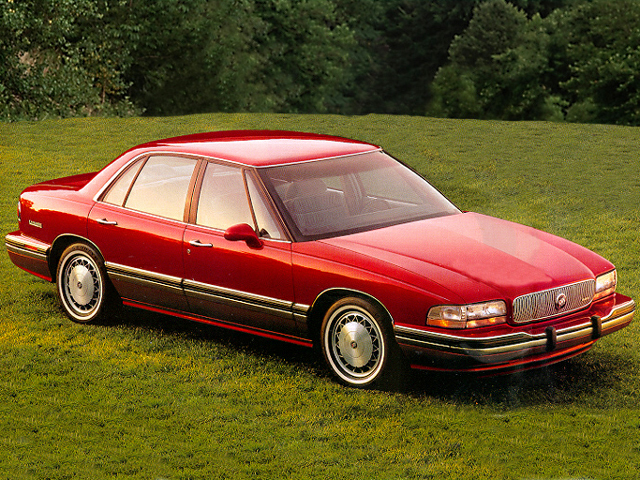