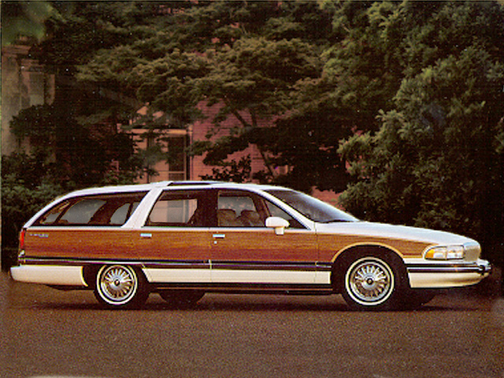 Our 1992 Buick Roadmaster trim comparison will help you decide.

The Buick Roadmaster station wagon is one of my favorite cars of the ’92 model year.

Before spending a week with the big Roadmaster, no one could have told me I would like such a huge car and a station wagon at that – without me phoning for the men in white coats.

But hey, let’s give credit where credit is due. The Roadmaster station wagon is a class act. It is comfortable, powerful and roomy. And it’s loaded with ’90s creature-comfort features, such as a plush leather interior, a sunroof and a CD player. For safety there’s a driver-side air bag and anti-lock brakes.

If you have a large family and just can’t warm up to a minivan, a big station wagon is probably the next best alternative.

The Roadmaster and its cousin, the Chevrolet Caprice, are the only two wagons you can buy with V-8 power.

You would never guess the Roadmaster Estate Wagon weighs more than 2 tons – 4,508 pounds to be exact – judging by the way it performs.

The Roadmaster comes with a 5.7-liter fuel injected V-8 that provides 180 horsepower. The car may be big and heavy, but it is not slow. There’s plenty of muscle for passing and plenty for gaining speed to merge onto busy highways.

A computer-controlled four-speed automatic is the only transmission available. In the test car, shifts from first to second were abrupt and a little rough.

The engine is smooth and quiet, and given the Roadmaster’s girth, the V-8 has a miserly attitude toward unleaded gas.

Driven normally, the Roadmaster Estate Wagon returned 17.5 miles per gallon in the city and 26 on the highway. Once cruising speed is reached, the engine isn’t running much faster than an idle.

The Roadmaster’s soft and quiet luxury-car ride is its best trait.

Road noise is close to non-existent, and the big wagon seems to flatten minor bumps.

Though heavy, the Roadmaster is easy to control, thanks to variable-effort power-assisted steering and front disc, rear drum anti-lock brakes.

The test car came outfitted with the optional ($325) trailer towing package, which included a limited-slip differential and a heavy-duty cooling system. Buick says this package allows the Roadmaster to tow up to 5,000 pounds.

For the most part, Buick’s designers got the Roadmaster’s details right. You might consider the Roadmaster an alternative to a luxury minivan.

The driver’s window has a one-touch button that lowers the window automatically. There’s a wiper for the rear window. The tailgate opens in two ways: it either swings open or folds down.

The Roadmaster can seat eight people. With rear seat folded down, you can haul full-size sheets of plywood.

The driver and two passengers have plenty of room on the power-adjustable front bench seat, as do the three passengers in the middle seat.

However, the fold-down rear seat would only be comfortable for small children. T here isn’t much leg room back there.

BecauseI own a British car with real wood, I am usually not a fan of fake wood – inside or out. But the simulated wood panels on the outside of the Roadmaster looked nice and they fit well. I could live with it.

The Roadmaster wagon comes with a non-opening glass sunroof above the middle seat passengers. It’s unusual for a big wagon and a nice touch. The sunroof even comes with pull-out shades.

Buick equips the Roadmaster with a simple, easy-to-read set of analog gauges that includes a tachometer. But the fuel gauge in the the test car was erratic. A sharp curve could make the needle swing from nearly empty to three-quarters of a tank.

If you’ve test driven the scads of minivans out there and haven’t found one you like, why not try a big wagon?

The 1993 Roadmaster Estate – on sal now – has been given minor trim improvements but is the same car as the ’92.

Truett’s tip: Buick’s Roadmaster Estate Wagon is an excellent alternative to a minivan. It is smooth, quiet, powerful and loaded with creature-comfort items.

Best car I ever owned.

December 26, 2017
By Lex Zon from Orillia Ontario Canada
Used to own this car

Best car I ever owned. I had a total of 5 cars and 2 trucks. If GM produced a new model of this I would buy it new.

December 7, 2012
By BiggSteve from Kansas City, MO
Owns this car

This has been by far the best car we have ever owned. We purchased this car back in 2004 and have only put a fuel pump and a muffler in it since and probably due to the fact it had the original fuel filter still on it with 173000 miles on the clock. Not a good thing. Great highway car. We have had a best of 34mpg on a 400 mile trip with an average of 32mpg on the rest of the trips. The 350 gives lots of low end torque so there is no problem getting the car moving. Will definitely buy another Roadmaster soon.

Power From A Family Car?!

September 2, 2011
By Johnny G from Santa Fe,TX
Owns this car

I owned a 92 buick Roadmaster and boy did this thing haul! I was completely surprised to push 150 in this thing, Even at that speed the ride is so smooth that its like riding on Air! Leather seats super comfy. Exterior; For its time is cool I guess but Im more of a sportier guy. Power everything, Seats,Windows, From the early 90's I was surprised with its functionality!

All model years for the Buick Roadmaster 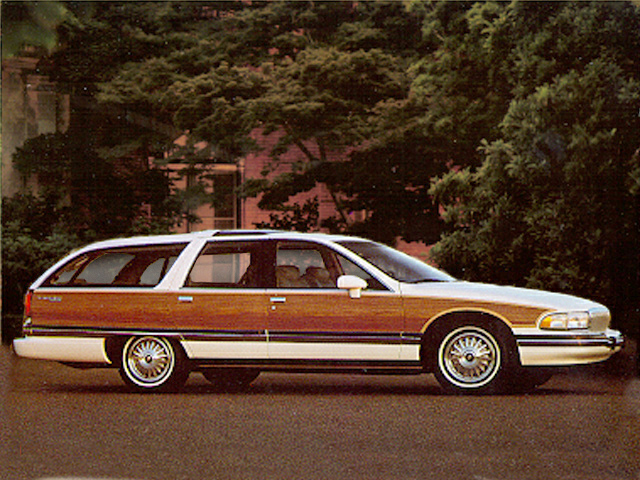