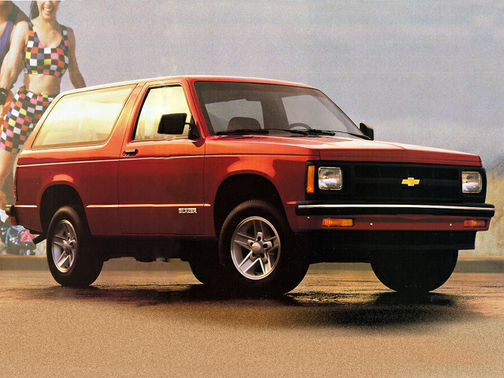 Our 1992 Chevrolet S-10 Blazer trim comparison will help you decide.

Sometimes it doesn`t pay to economize.

The 1992 Chevy Blazer S10 utility vehicle is one such example. It isoffered in two- and four-wheel-drive versions.

The difference comes down to a base price of $15,783 for the two-wheeldrive, versus $17,953 for the four-wheel drive, or about $2,200. That`s a lot of money. But if you live in the Snow Belt, there are days when $2,200 doesn`tseem to be all that much, such as when you wake up and the road is filled with6 inches of snow and you can`t miss work, or when Mom takes the kids to visit the grandparents and halfway there runs into a blizzard.

If you`re going to look at a Blazer, go the full 9 yards and consider the four-wheel-drive version.

In July you might ask yourself why you`re giving up 1 to 2 m.p.g. at thepump. If you wait until December, the question will be answered.

For added performance, the Blazer S10 offers an optional “enhanced“version of the 4.3-liter, 160-horsepower V-6 that`s standard under the hood.The V-6 was enhanced by 40 horsepower, to 200. If you`ve driven a Blazer with the 160 horsepower V-6 and said to yourself, “Nice engine, but if only it hada bit more oomph to tow or climb hills,“ you`ll find Chevy was eavesdropping on you.

The enhanced 4.3 delivers a kick while sounding and acting a bit smoother and quieter than the lower-horsepower version. You may suspect a V-8 wasplanted under the hood until you lift it and take a look.

Chevy boasts its enhanced V-6 will start more quickly in cold weather, as well. The vehicle arrived a bit late to substantiate the claim on a nice,crisp January morning, but it started rather quickly during Chicago`s spring, which is perhaps only a few degrees warmer than winter.

To the base price of the two-wheel-drive Blazer S10, our test vehicleadded the enhanced V-6 at $1,390, which includes the four-speed automatic and a heavy-duty cooling system; a preferred-equipment package, normally priced at$4,901 but discounted by $1,300, which includes air conditioning, upgradedradio, cruise control, tilt steering, intermittent windshield wipers, insidetailgate release, rear-window defogger, luggage carrier, deep-tinted glass on the sides and light-tinted glass in the rear, rear-window washer/wiper, power mirrors and visor vanity mirrors; tinted front glass at $81; air dam with fog lamps at $115 ; and heavy-duty towing package at $211.

September 5, 2019
By KayD from Virginia
Owns this car

February 2, 2012
By Roadrunner from newmexico
Owns this car

1992 Chevrolet S10 Blazer. Primary use for my blazer hunting offroading love the 200 hp v 6. i did have a 91 expoler 4x4 4 door i did like the ford better but the 4.0 had 150 hp the blazer had 200 hp the blazer was shorter only thing i did not like about my blazer was the uncomfortable seats.

All model years for the Chevrolet S-10 Blazer 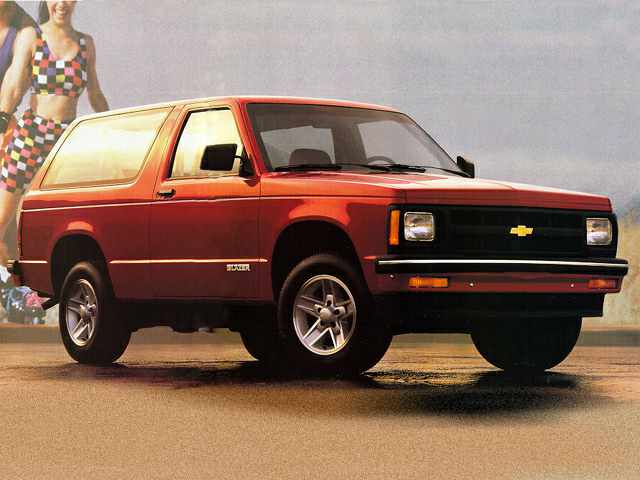