Our 1995 Hyundai Sonata trim comparison will help you decide.

The 1995 Sonata represents a high point in engineering for Hyundai Motor Co. of South Korea.

While the company has been known as a builder of inexpensive cars, it has been working on technology. It all comes together in its latest Sonata base, GL and GLS family sedans.

Hyundai gave its engineers complete freedom to develop new models, and the results are both aesthetically pleasing and technically advanced.

The car has a new exterior, a new platform and a redesigned suspension system, along with refinements to the drivetrain and interior. These add up to an all-new automobile.

“Hyundai is going to be a major force in the marketplace,” said Jim Webb, general manager of Butler Hyundai-Suzuki. “Originally they built no-frills cars, but now they’re concentrating on quality, style and technology at affordable prices.”

These days everyone is forming body lines around an aerodynamic theme, but some lines are better than others and the 1995 Sonata moves toward the front of its class.

According to Hyundai Motor America, the new model offers more interior room than any vehicle in its class. Quietness is enhanced and the ride improved with a 20 percent stiffer body than the 1994 model.

I think Hyundai has done a really excellent job of developing this extremely rigid body shell and its attendant suspension system.

To improve the ride and handling, engineers followed a proven path of creating a longer wheelbase and a wider track for the wheels. You don’t have to be a graduate of MIT to understand that a limousine rides better than a stubby econobox.

The wheelbase has been increased a full three inches to 106.3 inches, a length that knocks on the door of some decidedly upscale American and European products.

At the same time, engineers made another smart move by lowering the center of gravity and improving the front-to-rear weight distribution.

The weight distribution is now 60 percent front/40 percent rear for the front-wheel-drive car. The weight bias over the front wheels assures maximum traction on slippery surfaces and stability when going fast.

Handling with the four-wheel independent suspension is enhanced by a negative offset in the front wheels to reduce a tendency to rise under acceleration and dive under braking.

The Sonata’s performance is going to be pretty decent, whether in four-cylinder form or with the V6 that is optional with the GL and standard in the GLS.

The V6 is rated at 168 foot-pounds of torque, 40 more than the dual-cam 4, and that’s what makes it possible to move away from stoplights in a hurry.

There is, however, a lot of speed to the dual-cam 4 vs. the single-overhead- cam V6, as the 137 horsepower comes in at 6,000 rpm compared to the V6’s 142 horsepower at 5,000 rpm. With higher gear ratios for the final drive, a GL or GLS V6 probably is going to be a little faster than a base Sonata, but not by much.

But most buyers of the three models won’t care. The car is designed as a family sedan, and marketing demographics indicate buyers tend to be about 35 years old up to middle age.

“We sell about an equal number of all three models,” Webb said. “It would be difficult to classify any one of the three as being the best seller.

“Buyers are middle class, are from about 35 to around 50, and have been priced out of the market by our competitors.”

The base Sonata has air conditioning, a stereo and other sundry equipment as standard for just a little more than $13,000. A GLS carrying everything the company makes will be a touch under $18,000.

“The market today is driven by price and qual ity,” Webb said. “And with this new car, we can offer both.”

I bought my Sonata 2 years ago with 85,000 miles and have never had a problem. It is a reliiable, dependable car. Great deal.

i purchased a 95 sonata just over one year ago, with fewer than 65000 miles, and have kept up on all maintenance of it. so far i've had to replace the engine, the entire brake system, and now the transmission is dead. add to this the fact that halfway through production the engine and transmissions used were changed, so if you have to replace one you have to guess at which part you need, and if you're wrong you have to buy another one. though the newer hyundai cars are excellent and very reliable, this particular model is not worth even half of it's blue book value. if i do replace the transmission i will have spent more than double the value of the car on repairs in just over one year. NOT WORTH IT!

This car had all the features I could have expected: power windows, power locks, nice tape player, foldable back seat. Yet, being 6 cylinder, it had really low mileage per gallon (like 20). The parts for this car tend to be expensive, hence expensive repairs. After 100k, this car really started to break down, also possibly due to me trying to keep maintenance inexpensive. Seems like this car gets "check engine" a lot, which translates to trouble during emission tests. Mechanics told me not to bother about it as it is most likely egr valve which is expensive to fix. 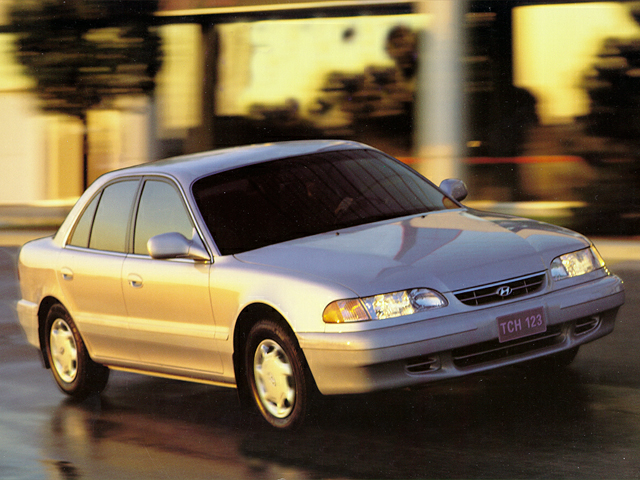