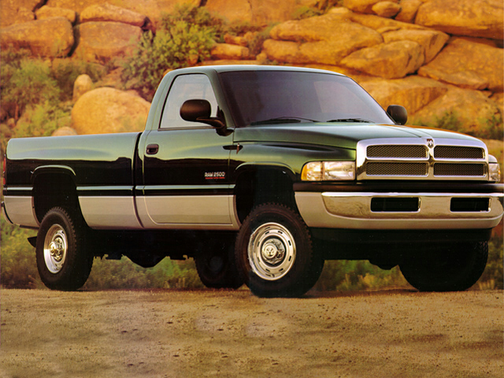 It used to be so easy to shop for a full-size pickup truck. You either bought the Ford F-150 or the Chevrolet C/K.

Before the 1994 model year, there really weren’t any other serious contenders.

The sales numbers tell the story here. Traditionally, Chevy and Ford have split the big pickup-truck market. Last year, the two automakers sold a combined total of more than a million full-size trucks, with Ford edging out Chevy for the title of best-selling truck.

Although built well, Toyota’s T-100 can’t compete in the full-size category because of its underpowered V-6 and high price. And the old Dodge truck, the D-150, had been chugging along virtually unchanged since 1972.

But for 1994, Dodge turned off the respirator that was keeping the old D-150 alive, and now is offering the Dodge Ram, a truck that is a legitimate third choice to Ford and Chevy.

The Ram is a handsome, macho brute of truck that is winning over buyers from Ford and Chevrolet and is tempting those who have never before considered buying a truck.

If the Ram’s big-rig looks don’t impress you, then its ride, comfort, performance and innovative interior likely will.

When we tested the Dodge Ram 1500 Laramie SLT, one thing became very clear: Dodge has brought some fresh thinking to the party.

Buyers have a choice of five engines, ranging from a 3.9-liter V-6 to the 8.0-liter V-10. The powerful Cummins Direct Injection Turbo-Diesel also is available.

However, the 5.2-liter engine offers an excellent blend of economy and performance. If you would buy a truck and use it as car, then this engine should perhaps receive the most serious consideration.

Driven easily, you can expect to burn regular unleaded at the rate of16 mpg in the city and 20 mpg on the highway. Yet the 5.2-liter engine delivers ample power for passing slower traffic and for hauling heavy loads.

I logged 637 miles in our test truck, which was equipped with a three-speed automatic and electronically operated overdrive – essentially a four-speed transmission. A button on the dash allows the driver to disengage overdrive, which allows the transmission to go no higher than third gear when climbing or pulling power is needed. A five-speed manual gearbox also is available.

The Ram does not offer a ride that is significantly better than the Ford F-150 or Chevrolet C/K trucks.

Like the Ford and Chevy, the Dodge Ram has a firm – but not harsh – ride and at hletic road manners.

The truck seems to love bad roads. The stiff frame underneath lets the suspension system give generous up and down wheel movement.

On two-wheel drive models, such as our test truck, front suspension is independent with coil springs up front and live axle with leaf springs in the rear. This setup inspires confidence and gives the driver a feeling of security and safety when driving over bad terrain.

Dodge engineers did a particularly nice job with the Ram’s power-assisted steering. You’ll expend a bit more energy turning the steering wheel in the Ram than you will in the Ford or Chevy, but you’ll have a better feel of the road. The steering is sharp and responsive.

The power assisted disc/drum brakes, are another area where the Ram is simply superb. Our test truck had the optional ($500) four-wheel anti-lock system, though rear-wheel ABS is standard on all Rams.

If there is a negative, it is this: the Ram is not easy to maneuver in tigh t places. Because the truck is so big, you find yourself being extra careful when backing up. Making sharp, tight turns in a parking lot can be difficult.

Motor Trend magazine selected the Ram as its truck of the year. One look inside and you’ll know why.

The fold-down center section can hold a lap-top computer, pencils and other small items. The dash features a pullout cupholder big enough to hold the biggest cup of soda you can buy at a convenience store.

Flip the rear part of the bench seat forward and you will find a cargo net and adjustable cargo trays that hang on the rear of the cab. These trays can serve as a toolbox, or you can place such things as an umbrella or cane in them.

Generally, the switches and buttons are first-rate. They are arranged sensibly and they are easy to use and read. Cruise control switches, for instance, are on the lower portion of the steering wheel and can be operated with your thumbs.

I do have two minor gripes.

The plastic outer edge of the dash squeaked when I drove over rough terrain. The sound of plastic creaking cheapened an otherwise excellent interior.

Our test truck also generated a distracting amount of wind noise near the outside driver’s door-mounted mirror.

Except for a minor recall involving a potentially weak rivet in the seat, the Ram has been free of troubles.

Maybe the squeaky dash and the wind noise are not typical of the truck.

If I were in the market for a truck, the Ram likely would top my list.

Its brawny looks made me feel great because I felt I was driving something different and special. Numerous times people told me how much they liked the Ram’s styling.

The Ram’s performance and handling would satisfy any sporty urges I might have.

And its large, well-thought-out interior blows the competition away.

Simply stated: I think the Dodge Ram is the best all-round truck on the road.

Love how it drives

I love how smooth it rides and the power. Very roomy I would recommend this vehicle to anyone interested. Very quiet for a diesel. Very pleased.

Plenty of power & never been stuck lol, but it does like fuel, around 8 mpg, but it weighs 8800 lbs, kinda rusty now after 24 years

I have never had any issues with this vehicle, it has been a great daily driver for the five years that I have owned it.

All model years for the Dodge Ram 2500 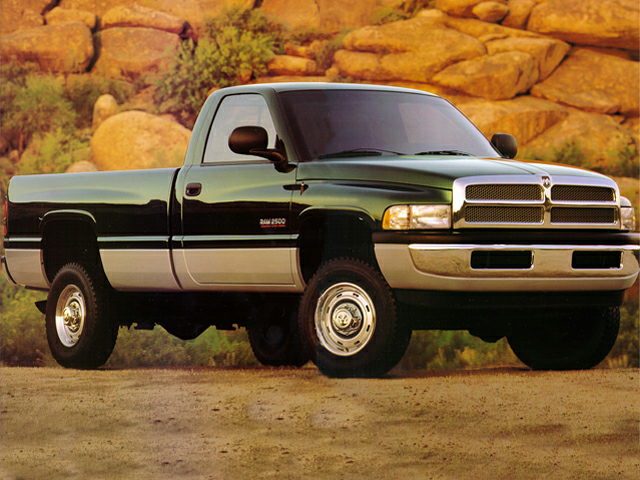