Our 1994 Chevrolet Cavalier trim comparison will help you decide.

Some things improve with age. Wine, for example. And that pair of knock-around shoes. Even kids, though the exact moment they improve is a closely guarded secret.

In the automotive world, things usually deteriorate with age, because new technology passes by old models.

Take the Chevy Cavalier, a car that has roamed this planet since Cain and Abel. It has been virtually unchanged since Day One. Cavalier is tiny and somewhat cramped, offers a finicky and somewhat arthritic-shifting five-speed manual transmission and sports a horn and glove box where most cars have air bags in the steering wheel and dash.

In the fall, a new Cavalier finally will arrive, and Chevy promises that past problems will be solved. The ’95 Cavalier is larger and roomier, and driver- and passenger-side air bags will be standard.

We’ve seen the ’95 car but weren’t allowed inside, so we’ll have to reservejudgment on roominess and comfort and the five-speed’s resistance to shifting.We can say that the styling won’t knock your socks off.

We didn’t expect much from the aged car, but we got more than we expected. The car arrived during a snowstorm, and the roadway never cleared until after the car was returned. Yet it handled the adverse weather well. While BMWs tookunexpected detours into ditches, the little Cavalier held to the pavement.

The anti-lock brakes helped, but so did the standard five-speed. The transmission wasn’t smooth, but it served a useful purpose. Rather than tapping the brake pedal when approaching a slippery intersection as the light turned red, we only had to downshift to let the engine do some of the braking.

The transition from fifth to fourth to third wasn’t as smooth as in a Hondaor Saturn, but it got the job done. Unfortunately, when the roads are clear and the lever hesitates between gears, the five-speed is a pain in the trousers.

Unless you live north of the Arctic Circle, chances are you’ll experience more days of clear roads than of snow-covered or iced-up roads, so that five-speed may not be all that practical. And if you live in Chicagoland, where there are but two seasons-winter and construction-do you really want to mess with five forward gears for 20 miles until you finally reach the person napping against the “End of Construction” sign?

While the Cavalier’s anti-lock brakes are standard, an air bag is unobtainable until ’95, when dual air bags will be standard. The availability of anti-lock brakes, or ABS, is a throwback to the GM dictate of a couple years ago that caused the automaker to promote ABS, not bags, as the safety system you should have. The reason GM promoted ABS over bags is that GM made its own ABS but had to send out for bags, which means it made money selling ABS but spent money buying bags. Mrs. Motors didn’t raise any dumb Generals.

For 1994 Chevy beefed up its base 2.2-liter, fo ur-cylinder engine to 120 horsepower, squeezing 10 more horsepower out of it. Just to make sure we appreciated Cavalier’s pep, Chevy stuck an optional 3.1-liter, 140-horsepower V-6 under the hood in the test car. No use taking chances.

The Cavalier we tested was the two-door RS coupe, which carries a base price of $10,715. Our test vehicle added the V-6 at $834; a preferred equipment group consisting of speed control and adjustable steering column at $370; power windows at $265; split, folding rear seat backs at $180; electric rear-window defogger at $170; electronically tuned AM/FM stereo with cassette and digital clock at $140; and deck-lid spoiler at $110. The sticker read $12,784, to which you add $475 for fr eight.

September 11, 2018
By Frankojanko from Milwaukee
Used to own this car

This car just wouldn?t die! I drove this thing into the ground and even when things went wrong it kept on running! I was so surprised. I even let it sit two years and when I put a new battery in it and fuel stabilizer it started right back up! I loved how small it was as well. Could fit anywhere

I have owned my little two door RS coupe since it was brand new! It was my first car. I still have it and it is going to be handed down to my son for his first car. I asked if he wanted something different and he said he wanted it! Never let me down!

September 8, 2010
By Victoria from ILLINOIS
Owns this car

I bought a 1994 Chevy Cavalier in 2000 it had 50,000 miles on it when I bought it.2005 I started having some mecanical prolems with it and traded it in,it had over 3000,000 miles and not once in the five years I drove it did it ever leave me stranded I WISH I HAD ANOTHER ONE LIKE IT,it was so DEPENDABLE. 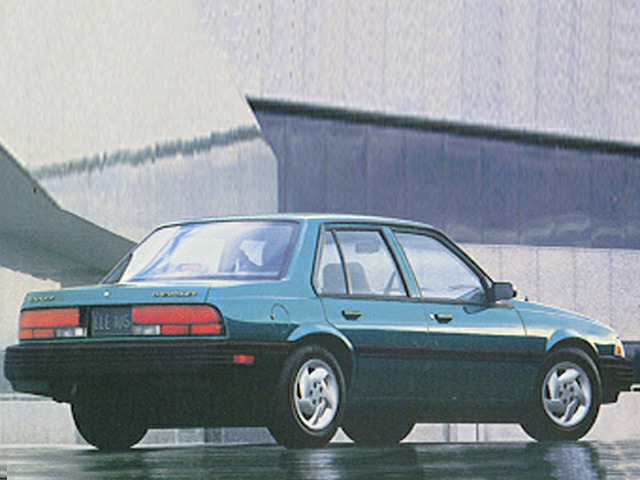