Our 1996 Chevrolet Cavalier trim comparison will help you decide.

Chevrolet’s new Cavalier has taken off like the space shuttle.

In just its second year on the market since a major overhaul, the Cavalier has rocketed to the top of the compact-car sale charts.

The Cavalier earned the top spot without any rebates or other tomfoolery because it is a solid, high-quality, value-packed automobile.

You are going to have a hard time finding a similar-sized compact that, for the money, offers as many safety features, as much room and the same amenities as our test car, a sporty Cavalier Z24.

In many import showrooms, $16,000 doesn’t get much. At a Chevrolet dealer, you can’t spend much more on a Cavalier unless you opt for the sporty convertible model.

If you’ve sworn off small American cars – and who could blame you based on some of Detroit’s previous clunkers – you’ll be very pleasantly surprised at the Cavalier’s Toyota-like quality.

In Chevy parlance, Z has come to mean performance.

But don’t let the Z24 moniker fool you. Unlike other Chevrolets with a Z in the name (Camaro Z28, Monte Carlo Z34), the Cavalier is mostly show and not much go. It’s sporty-looking but not particularly fast.

The Z24 does deliver snappy performance, and it can be fun to drive. However, if you want tire-screeching performance, you’ll have to look elsewhere.

Unlike many other double-overhead cam 16-valve engines, the Cavalier’s 2.4-liter Twin Cam motor need not be revved hard to deliver strong acceleration at low speeds.

Chevrolet engineers tuned the 16-valve, 150-horsepower engine to deliver most of its power as it is revving up. The 2,788-pound Cavalier moves away from a traffic light fairly briskly, offers decent mid-range power and cruises quietly and efficiently on the highway.

Previousincarnations of the 2.4-liter GM Twin Cam engine were called Quad 4, and they developed as much as 195-horsepower. But GM has virtually overhauled this engine.

Counter-rotating balance shafts cancel vibrations, and several of the engine’s components, such as the power steering pump and alternator, are mounted directly to the engine. This eliminates parts, saves weight and reduces maintenance.

Except for oil changes, the 2.4-liter engine is designed to go without a tuneup until it reaches 100,000 miles. Even the radiator coolant lasts that long.

The Z24 has a stiffer suspension system than standard Cavaliers. The ride is semifirm and compliant in most instances. Some larger bumps in the road can make the car lose its composure and bounce hard, but that doesn’t happen often.

I was very impressed with the quick, agile, sharp turns our test car c ould make. The turning radius is 35.6 feet; that’s tight. U-turns are no problem, and maneuvering into awkward parking spaces is a breeze. But the Z24’s braking performance could be improved.

The Cavalier needs better brakes. Although the anti-lock system works smoothly, the front disc/rear drum brakes don’t inspire confidence in hard braking. They don’t feel as if they have enough stopping power. Discs on all four corners might be what is needed.

It’s no accident that the Cavalier feels very much like a Toyota. In Japan, the Chevrolet Cavalier is called the Toyota Cavalier, and the steering wheel is on the right side of the car. The car marks the first time Toyota has put its name on a car built by another automaker.

When you sit inside a Cavalier, it becomes evident why the car is good enough to wear a Toyota badge. It has the same user-friendly features, smart design and comfortable feeling of an import.

The dash, gauges and interior break no new ground in terms of style and layout. The shape of the interior is safely conservative, with all the buttons, switches and controls placed within easy reach of the driver. They also are simple to use.

By using the rotary knobs mounted in the center of the dash below the radio, the air conditioner can be adjusted without diverting much attention from driving. The lights and windshield wiper are controlled by stalk-mounted switches behind the steering wheel. You don’t have to reach behind the wheel to operate anything.

The seats, however, may be a bit too firm. I sometimes found it difficult to get comfortable, especially because the upper portion of the seat is too straight.

The rear seats fold forward and open a passage to the trunk for large items.

If you are in the market for a compact and have your heart set on a Honda Civic, Ford Escort, Toyota Corolla or Dodge/Plymouth Neon, I suggest giving the Cavalier Z24 a solid kick in the tires. You may find, as I did, that none of the others will require as little maintenance as the Cavalier and few can match the value.

We have 2 cavaliers, 2003 sedan, my wife just loves. Easy for her, and simple. has not cost us a dime in several years. 250,000 miles, still strong. I have the 2000 Z24 convertible, had this vehicle for about 4 years, put a new top on it, runs out real nice for a 2000. Actually a smooth riding car. I'm always looking for other cars, to play with. This one I like. My opinion they are great little cars

October 5, 2020
By chigekko from San Diego
Owns this car

We bought it new in 1996 and wound up never getting rid of it. It's comfortable, the styling holds up and it's been a lot more reliable than I expected from a cheap Chevy. We only put about 5K a year on it, but it has been on a few long road trips. She's got about 120K on her, now. It's a Southern California car, but did ten years in snow country and then returned to California with us. Siped tires and its traction control/ABS made this a snow-eater ... never got stuck as long as we had clearance. The AC compressor has gone out twice. I replaced the struts. The water pump was replaced, I think. Other than that, it's been really great. The interior is okay. Lots of big, 90s GM plastic pieces that never fit quite right. It's noisier than some other cars, too. It handles fine ... predictable, reasonable limits and decent steering feedback for a GM product. Mine's the DOHC 2.4 liter with 150 horses. It scoots the car along just fine. The engine is willing and eager, but the car is neither "fast" or "slow." It's okay. Working on it is simple. Parts are still cheap. A decent used Cavalier costs less than tires on the new cars. The second-gen J-Cars (particularly the Chevy styling) are overlooked charmers. Cheap and reliable and easy to fix. Winner.

i bought this car in 2004 , it is my first car in USA , the engine is 2.2 and it is good for saving Gasoline, in 2015 i had head gasket problem, i and my relatives put new head gasket and new valve cover and new set of spark plugs and wires, in 2016 i decided to dedicate this car for the Lord, so i painted with that message you see now, it it very precious to me, it is part of my History . when i drive it i fell i am save, it is i said ( small tank ) the cavalier sold in Japan as ( Toyota Cavalier) so this is the Camry of USA 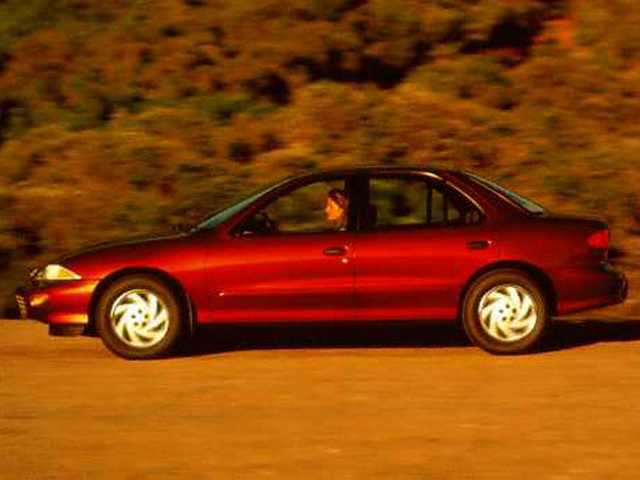