Our 1992 Chevrolet Lumina trim comparison will help you decide.

The Lumina with a kick to it.

That`s an apt description of the Z-34 version of the midsize Chevy for1992. The Z-34 breaks from the conservative Lumina mold by offering a 3.4-liter, 210-horsepower dual overhead cam V-6 teamed with either a five-speedmanual or four-speed automatic.

The Z-34 is available in coupe or sedan version for `92. We test-drove atwo-door coupe built on a 107.5-inch wheelbase and 198.3 inches long. Despite the dimensions, the rear seat is a bit cramped.

Our test car came with the five-speed, which started out a bit notchy,but like a new pair of shoes got smoother after a brief break-in period.That`s not like most GM five-speeds, which start out and stay finicky.

However, when the rain fell and the expressways ground to a halt, thefive-speed`s appeal quickly waned, especially since this is one of those unitsin which the clutch must be ground into the floorboard to ensure that gearsshift without grinding. For $275 a four-speed automatic can be had ($200 forthe automatic and $75 for an oil cooler required with the transmission).

The five-speed is fun moving through the gears and mighty practical whensnow is on the ground, because you can downshift to brake when approachingthe intersection as your green light turns red (although with antilock brakes you don`t have the fear of skidding).

But the automatic takes some of the agony out of rush-hour traffic. Andkeep in mind that only about 15 percent of the population can handle a manual transmission, which sharply reduces your possibilities when you choose tosell or trade in the car. Watch the smile on the salesman`s face who sold you the five-speed turn to a frown when you bring it back in a few years and ask, “What`ll you give me for it?“

Rather than belabor the transmission, let`s turn to styling. Designersdid a good job of making the Z-34 distinguishable from the ordinary Lumina.Body-colored bumpers, front air dam, hood louvers, plastic rocker-panelextensions and deck-lid spoiler add to the performance image.

Inside, the Chevy seat fetish engineer once again got his way. For somereason, Chevy over the last few years hasn`t been content with a bucket seatthat moves fore and aft by pulling a lever under the seat or pushing a button on the console.

Instead, under the seat you find a large iron bar to move the seatfoward and backward and a huge metal/plastic handle you press to move the seatup or down in a rocking motion. You really don`t move up and down as you rock forward or backward.

For some reason, when we want our legs closer to the pedals, it justdoesn`t seem right to rock the chair so the legs go forward and up while thetorso goes rearward and prone. If you were an astronaut preparing for launch, you`d assume that position, but not when you are about to maneuver a car onthe highway.

Whenever accelerating or braking hard, we felt the rocker movement in the seat . It`s not a real confidence builder.

At least Chevy kept the seat from being totally uncomfortable by dropping its other toy-the inflatable bladder-which you pump up with air whenever youfeel the need to punish yourself by making the seat back as stiff as a marbleslab.

The performance suspension package includes front and rear stabilizerbars and slightly stiffer spring rates to minimize body pitch or roll.Goodyear 16-inch Eagle GT+4 radials complement the package. Ride and handling are more than decent, but we`d feel in more control with a normal bucket seat with wide side bolsters.

In terms of safety, the Z-34 comes with four-wheel antilock brakesstandard, but no air bag.

Lumina, like its cousin GM W-body cars (Buick Regal, Pontiac Grand Prix,Olds Cutlass Supreme), undergoes a major styling update in the 1994 modelyear, and bags will be offered then.

In 1994 it also looks like Chevy will offer an old name on a W-bodyplatform-Monte Carlo . A handsome aerodynamic lavender/purple concept vehiclewas on the auto-show circuit this year to preview the fact a new car with anold name is going to return.

“That (Monte Carlo) project is still alive and healthy, and everythingis in place and we`re looking forward to it,“ a Chevy source said.

A great weekend ride or as a daily driver. This Z-34 won't disappoint. This ride turns heads. It really shines and attracts all kinds of attention. Fast & Smooth!

My first and still favorite car.

My dad game me his 92 lumina when I graduate from high school. It had about 72k miles on it and I drove it throughout college and after as well. When I sold it it had 230k miles and the only thing I changed on it was the starter, brakes and oil. The car was a tank. So comfortable and a pleasure to driver. I miss it even today and I'm still sad that I didn't keep it and took better care of it. I will definitely look to buy one again as my second car because it's till my favorite car that I've ever had

November 3, 2015
By barnfind from Niagara Area
Owns this car

Barn find with only 89,000 km back seat not even sat on. 3.4 purrrrs like a kitten, dual exhaust stainless from the factory. could use a couple of cup holders in the front seat area. but really a nice driver , 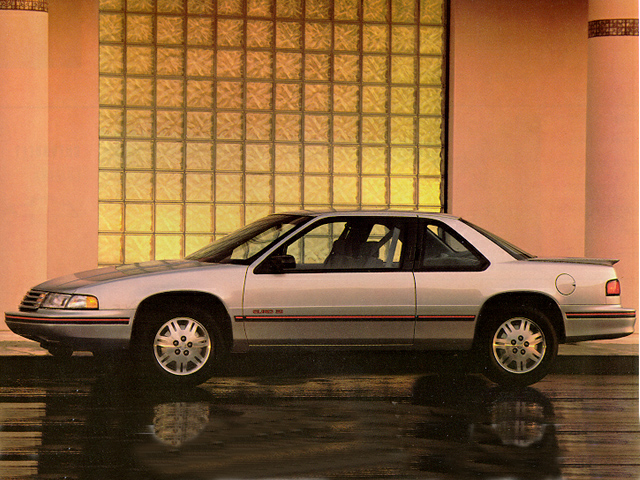