Our 1993 Chevrolet Lumina trim comparison will help you decide.

It was dislike and disappointment at first sight.

When this week’s test car arrived sporting the same old clunky dash, door-mounted seat belts – and still lacking a driver’s side air bag – I began preparing myself for a dull week.

Then I drove the blazing-red Lumina 3.4 Euro sedan, and I changed my mind.

At this point – the Lumina is 4 years old – there really should be a more user-friendly dash, an air bag and a set of seat belts that doesn’t cut across your neck.

Serious buyers can expect considerable flexibility, thanks to rebates and a pinch of good old-fashioned bargaining. Considering the price, the performance, the room and the equipment, the Lumina 3.4 Euro has much going for it in today’s competitive market.

With 200 horsepower on tap, the Lumina Euro 3.4 ranks as one of the most powerful mid-size sedans you can buy.

The engine under the hood is GM’s terrific 3.4-liter Twin Dual Cam V-6 – a four-cam, 24-valve fuel-injected dynamo that makes this sedan a star performer.

I found the test car to be most impressive when accelerating between 30 mph and 65 mph. With its crisp – but not loud – exhaust note, the Lumina 3.4 almost has a muscle car demeanor, and it has ample passing power.

The test car came with an exceptionally smooth computer-controlled four-speed automatic transmission. Power is delivered to the wheels with a higher level of refinement than I can remember in any recent front-wheel drive Chevrolet.

Specifically, Chevy’s engineers have all but eliminated torque steer, that nagging tendency for the car to pull to the left or right during fast acceleration.

Fuel mileage was excellent. Without the air conditioner on to sap fuel economy, the test car returned an even 20 mpg in city driving and 28 on the highway.

Were it not for the extraordinary amount of effort to turn the steering wheel, the Lumina would score quite high against othersporty sedans.

At slow speeds the car almost feels as if it has no power steering. However, once rolling along at 30 mph or so, the steering becomes much more manageable.

Perhaps Chevy ought to rethink the calibration of the power steering system. I imagine anyone other than a weightlifter or professional wrestler would find steering the Lumina at slow speeds too difficult for comfortable driving.

The Lumina’s four-wheel independent suspension and the four-wheel disc brakes are a fine match for the engine’s high horsepower.

The Lumina gets low marks for the interior because its dash seems outdated. The instruments are small and sometimes hard to read. And the driver must lean forward and reach for the air conditioner and radio buttons.

The first time I tried to exit the car at night, I fumbled for what seemed an intolerable amount of time feeling around the door panel for the handle. I noticed others do the same thing.

On p lus side of the ledger, this is the first time I have driven a Lumina and come away with a good feeling about the seats.

This year, the sporty bucket seats have been given extra padding. Now they are offer very good lower back support.

There’splenty of room in the rear. And the trunk, which contains a full-length cargo net, is huge.

If you read the automotive magazines, chances are you already have seen spy photos of the next-generation Lumina, due out in 1994. It looks like a sure-fire winner.

But if you need a car now, want to get a lot of performance for your money and can live without an air bag, take Chevy’s Lumina Euro 3.4for a test drive.

Even though I’m not fond of the dash and would like an air bag for the money, the car’s excellent road manners and performance are enough to offset the negatives.

Truett’s tip: You will be in for a major surprise when you test drive the new 3.4-liter Lumina sedan. Its performance and refined ro d manners are more impressive than you might think.

We purchased the car from a local Chevy dealership with 60K miles but a recent top end repalcement. Kept oil, filters and plugs new- the engine purrs like it was new and it's got great power (16 in. rims really make the difference) and has a great top gear for decent hiway mileage (22-25). Although we're going to sell it, I can't say enough about it's reliability. Always roars out of the start, even after 1 1/2 yrs sitting in the garage. A nice car for the money no doubt.

August 19, 2009
By Captain xxxxxxx from Waterville, ME
Owns this car

I have had 3 of these cars. They were 1 Euro coupe, and 2 Euro sedans, ranging from 92-94. Overall it is a good car, but there are a few things to watch for. From 90-94 GM used a leaf spring type setup that broke easly. Over time the rubers fall out of the ends and the spring fails. All of mine suffered from that problem. Also the cheap rear calipers only last one break job. They stick very easily and need to be changed EVERY time you do rear brakes. All of mine suffered this problem. Once you get past those things it is overall a great car. The 3.1 V6 maybe small but it packs a punch!

Thought it was a clunker!!

My other work car died on me for the time being, so I found this Lumina with only 74,000 original miles on it. Now my wife is driving it and i am in her suv. i love the power and how quiet it is. the only problem is that one of the struts is bad, but that will be corrected. the paint is terrible, my manager says that year had a laminent problem, but i am gonna keep it for a while and get it painted, one of the best cars i have driven!! 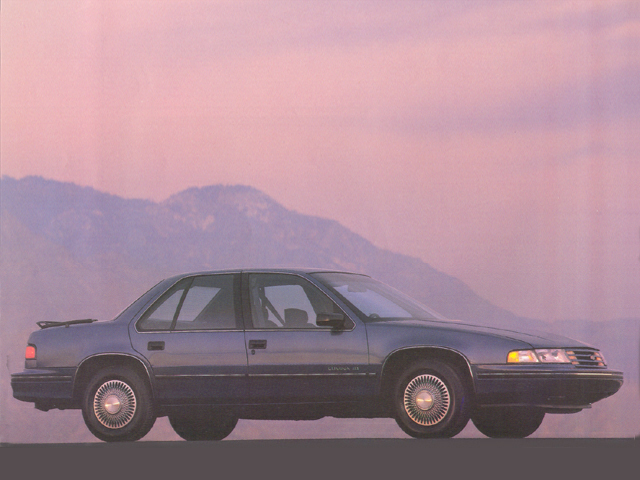